Quebec unveils strategy to convince unvaccinated to get vaxxed 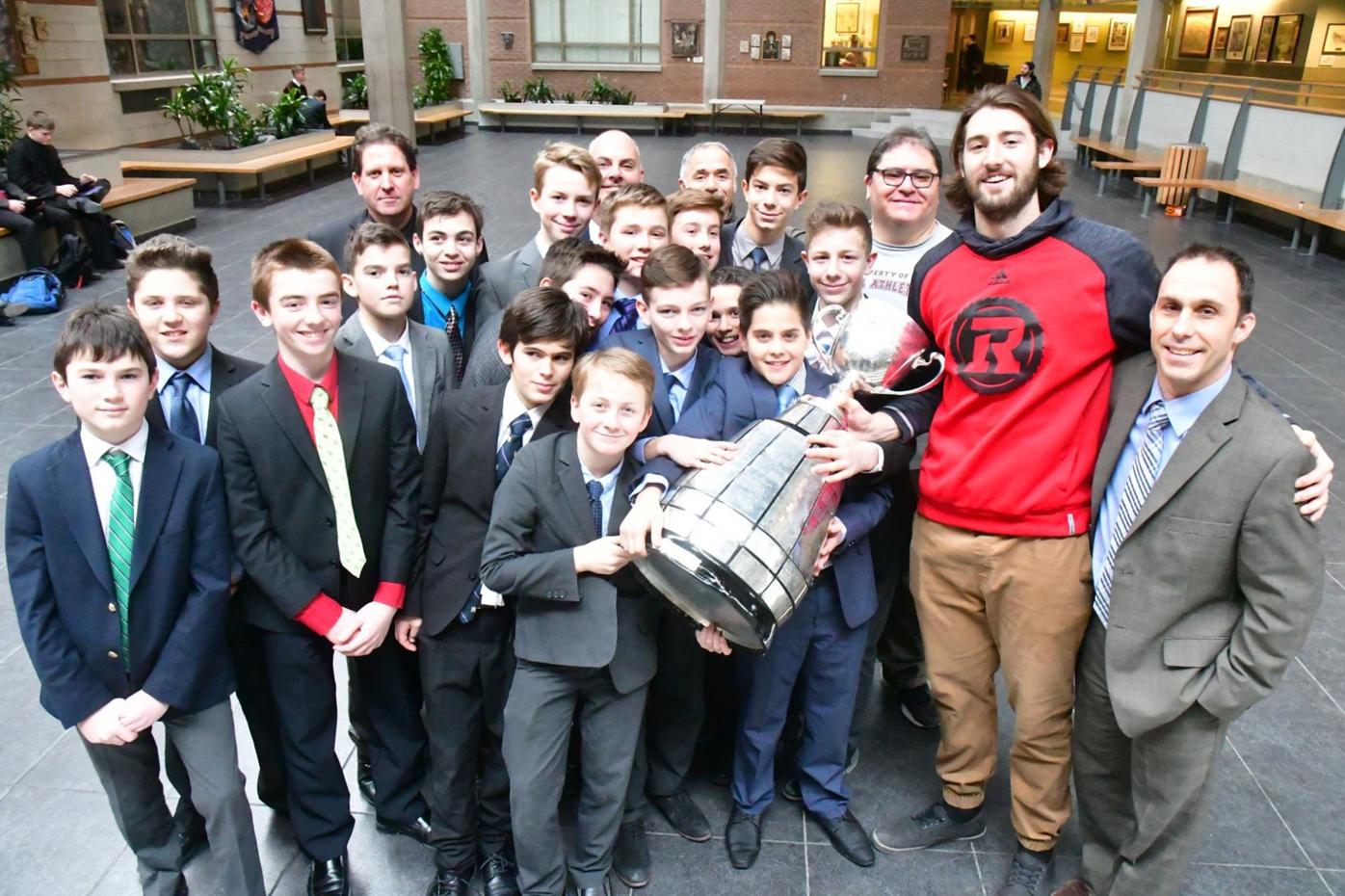 Scott Macdonell, with the Grey Cup in tow, paid a visit to his alma mater Loyola High School. 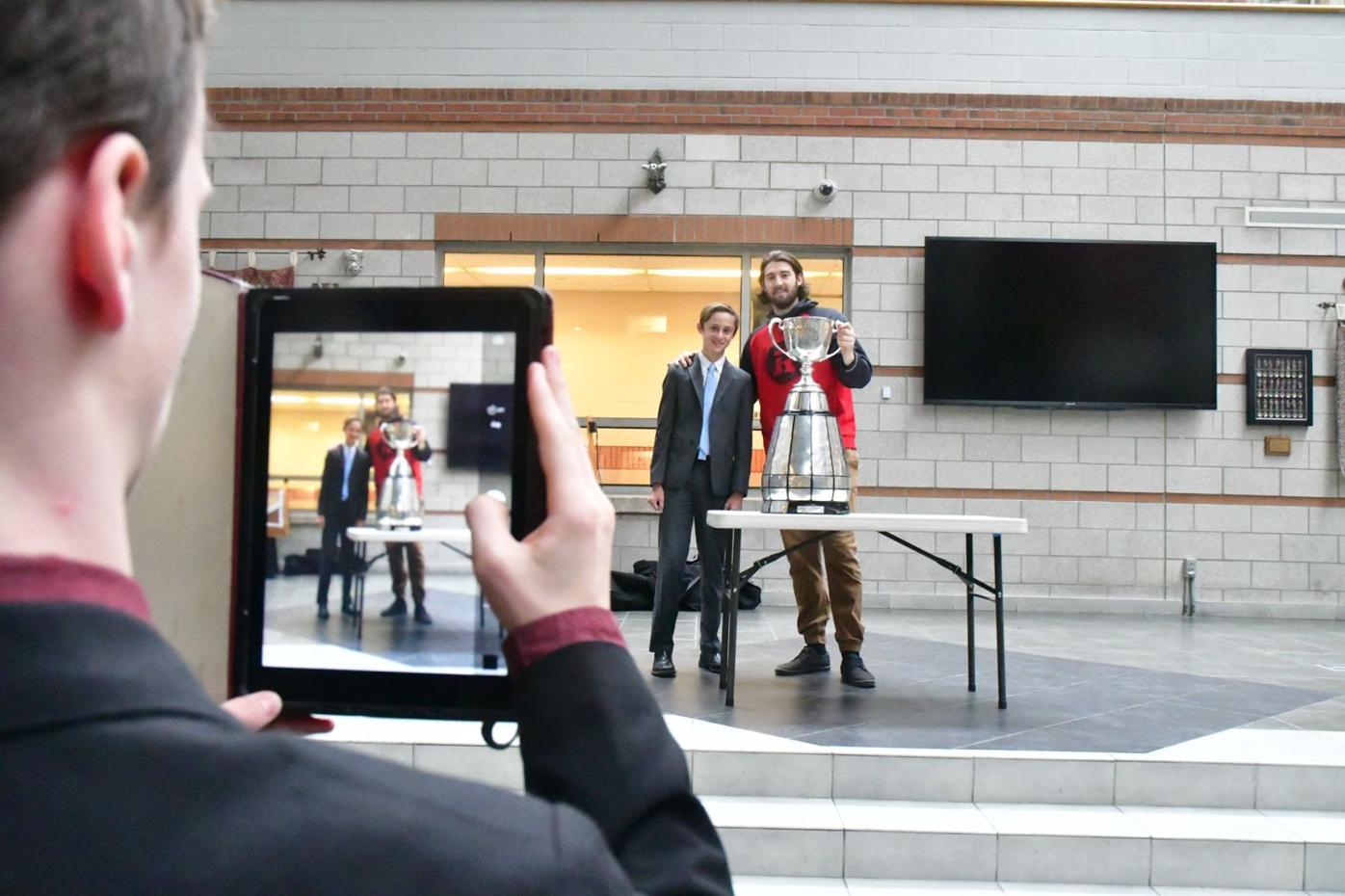 Loyola student Conner Christie is all smiles as he meets alumnus Scott Macdonell and the Grey Cup.

Scott Macdonell, with the Grey Cup in tow, paid a visit to his alma mater Loyola High School.

Loyola student Conner Christie is all smiles as he meets alumnus Scott Macdonell and the Grey Cup.

Scott Macdonell returned home to his native Montreal last week for a whirlwind day of appearances with the Grey Cup, won as a member of the champion Ottawa Redblacks. The 6-foot-5, 220-pound wide receiver in his third season in the CFL took the opportunity to spend his time with family and friends who have supported and believed in his pursuit of a pro career. One of the most important visits with Lord Grey’s hardware was to his high school Loyola. Macdonell was raised in the shadows of the Université de Montréal Carabins’ CEPSUM Stadium, yet football was not his sport growing up until he attended Loyola High School.

“We’d play it (football) in the schoolyard during recess and lunch in elementary school,” Scott Macdonell said. “But I never played on a team until Loyola.” It was when MacDonell was cut from the soccer team that he decided to try out for football. “I loved it and just wanted to learn all I could to be a good player.”

That launching pad at Loyola was the reason it was so important for Macdonell to return. “Without the foundation, I received here, I would not have achieved what I have so far,” he said.

From Loyola, it was on to Phillips Exeter Academy in New Hampshire where he continued to learn and improve as a member of the Big Red. Then it was on to Queens University and the Golden Gaels and mentoring under head coach Pat Sheahan and his staff. “Coach Pat was a great source of football skills and knowledge,” he said. Perseverance and hard work are hallmarks of Macdonell as he strived to make it as a pro.”Scott enjoyed a great career at Queen’s,” Golden Gaels head coach Pat Sheahan said. “ A great kid and great parents. It was a pleasure to have all the Macdonells with us here. Scott was a Loyola grad who attended prep school at Phillip’s Exeter Academy. I thought he would be a great fit for Queen’s as a big slot receiver. It was fun watching him grow up here. He had a great run here as a player. He now has a Queen’s commerce degree, three years of pro football and a Grey Cup. Not a bad resume.

He wasn’t originally invited to the Canadian Football League’s Combine after competing first at a regional event in Toronto but his skills were noted and were a second round (13th overall) pick by the expansion Redblacks. Now he can add Grey Cup winner to his portfolio.

“It was such a fantastic feeling,” he said. “To win one of the most prestigious trophies in all sports and the fans here are the best. When we had the parade and celebration, it is something I will always cherish.” Another thing that Macdonell will cherish is his time with his recently retired quarterback Henry Burris. “Hank is one of a kind,” he said. “A great player, a great leader, a great person and role model. I am so appreciative of the time I had with him.”

Macdonell ended his day surrounded by family and friends at a local eatery on Monkland. “I just didn’t win the Grey Cup,” he said. “All those with me did because they were with me, encouraging me in everything I did.”