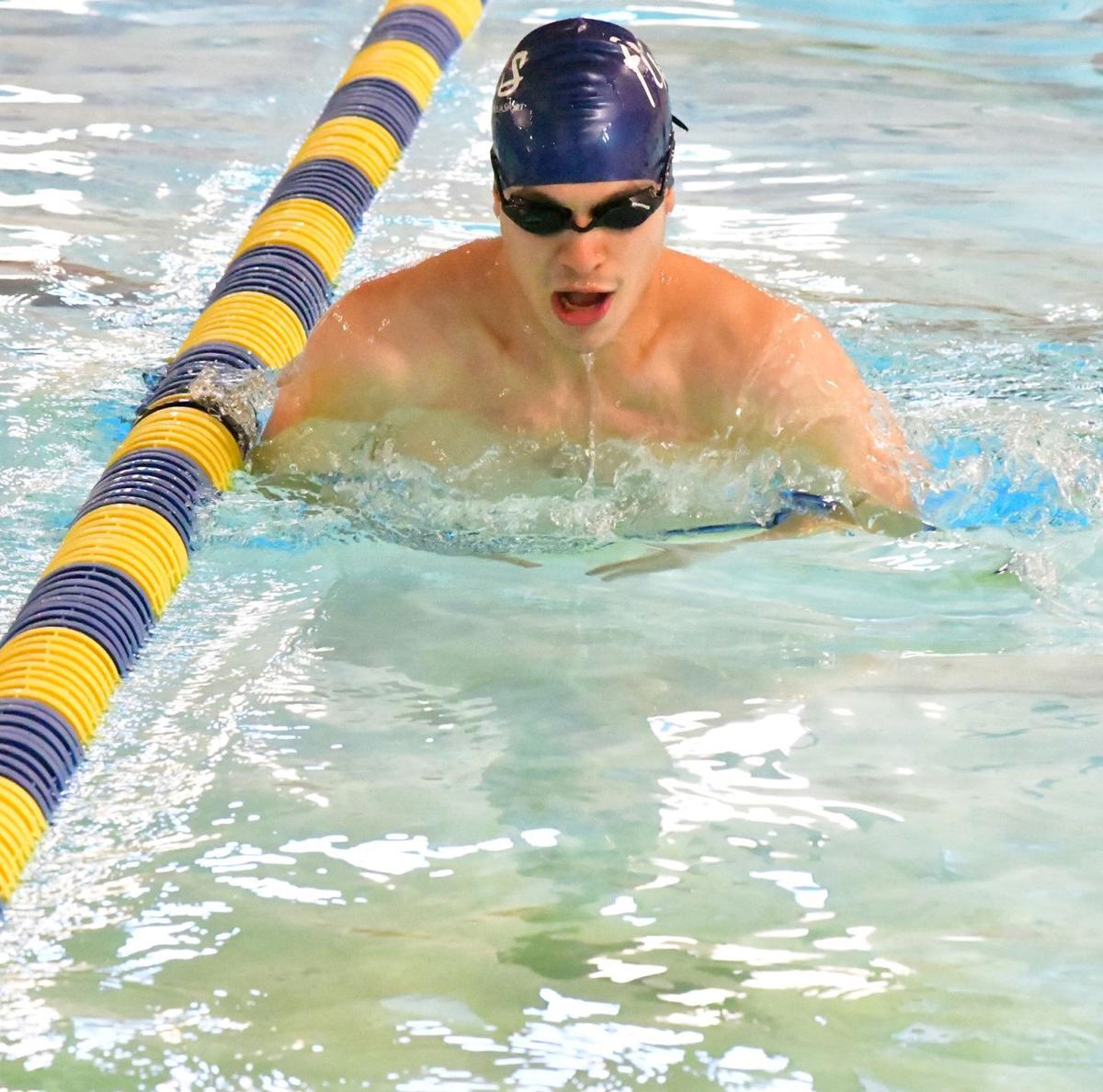 For the last two years Gabriel Martel has been a member of the Quebec Para-Swimming team and is a specialist in the breaststroke where he is ranked 18th in the world in the SB 11 category (complete visual impairment). 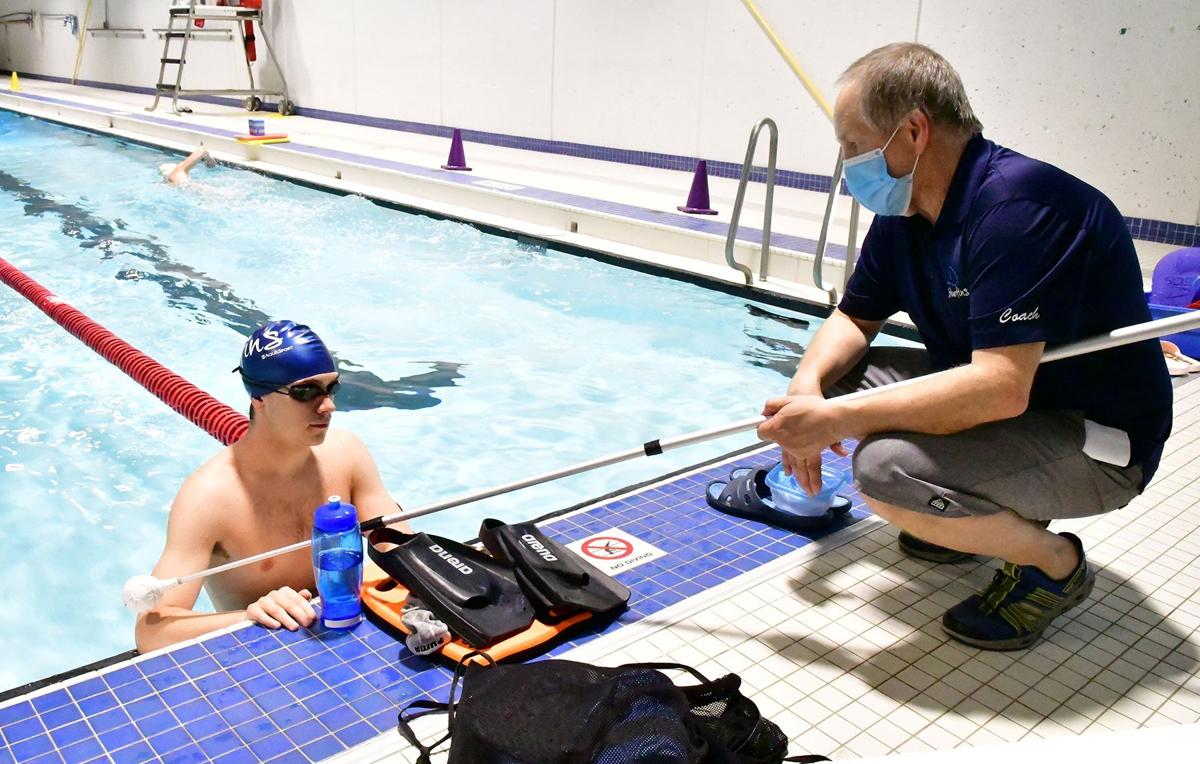 Gabriel Martel with coach Claude Picard. Note the pole held by coach Picard, it is not for social distancing but to alert Martel when he is approaching the pool wall.

For the last two years Gabriel Martel has been a member of the Quebec Para-Swimming team and is a specialist in the breaststroke where he is ranked 18th in the world in the SB 11 category (complete visual impairment).

Gabriel Martel with coach Claude Picard. Note the pole held by coach Picard, it is not for social distancing but to alert Martel when he is approaching the pool wall.

While Saint Lazare’s Gabriel Martel is blind, his vision as a competitive para-swimmer is perfectly clear, his goal is to compete in the Paralympics. Martel is training hard to attain that goal as the meet to decide the Tokyo Games team members will take place in Toronto at the end of May. A second hurdle for him to clear is gaining his international classification, which was to have happened last year in Italy but was cancelled due to the pandemic. Martel’s opportunity for that classification will take place in Berlin in June.

Martel, who lost all vision in his left eye and almost all vision in his right eye at the age of 13, has left other competitors in his wake in just four and a half years of training and competing. A member of the Beaconsfield Bluefins and coached by Claude Picard, Martel’s rise has been a combination of his dedication and work ethic along with the Bluefins’ supporting para-swimming athletes. Coach Picard also has a lot of experience in para-swimming as a coach and has sent athletes to the Para Swimming World Championships and the 2012 Paralympic Games in London, England.

Martel has taken to swimming like, well a fish takes to water because, “I enjoy the feeling of freedom in the water,” Gabriel Martel said. “The past year has been tough (due to the pandemic) but I will not let down on my dream, I love competing.” While he puts in the effort in the water, training and competitions are a team effort as Martel requires his coach’s input plus turn assistants, who advise Martel on his approach to the wall so he can execute his kick turns.

For the last two years Martel has been a member of the Quebec Para-Swimming team and is a specialist in the breaststroke where he is ranked 18th in the world in the SB 11 category (complete visual impairment). The 19 year-old Martel holds over twenty Canadian records and has won many medals in various competitions, including the Quebec Games in Thetford Mines in 2018, Quebec Cups, Eastern Canadian Championships and National Championships in Winnipeg in 2019. “One the reasons for his success and his progress over the last four years

is that he is super dedicated to his sport,” Bluefins’ coach Claude Picard said.

Martel’s dedication is even more evident with what he has endured since the pandemic hit. There have been no competitions since February, 2020 and training became problematic. By clinging to his Paralympic dream, Martel did his dryland training at home with programs sent to him. With pools shutdown, his parents had a pool installed in his grandmother’s garage where he could do laps. “My family has been such a great support,” Martel said. “Without them I couldn’t continue to get better.”

Over the past several months, pool time became available but there is limited hours and Martel could easily use Willie Nelson’s “On the Road Again” as his theme song. For training, Martel is utilizing sessions at Beaconsfield, Pointe Claire and Dollard. Add to the fact that the secondary V student at École Jacques-Ouellette in Longueuil, a specialized school for young people with visual impairments, from preschool through secondary school. He travels that great distance each school day, completes his classes then sees to his training regimen. This fall, Martel will attend CEGEP and study in the Human Sciences program.

Martel is determined to be in the Tokyo this coming August as a member of the Canadian Paralympic delegation but is focused on Toronto and Berlin.

To help with the expenses of taking part in the two upcoming important meets, his mother Mélanie Nabelsi has established a Go Fund Me Page, to donate search for Gabriel Martel aux Essaies Paralympiques at gofundme.com.