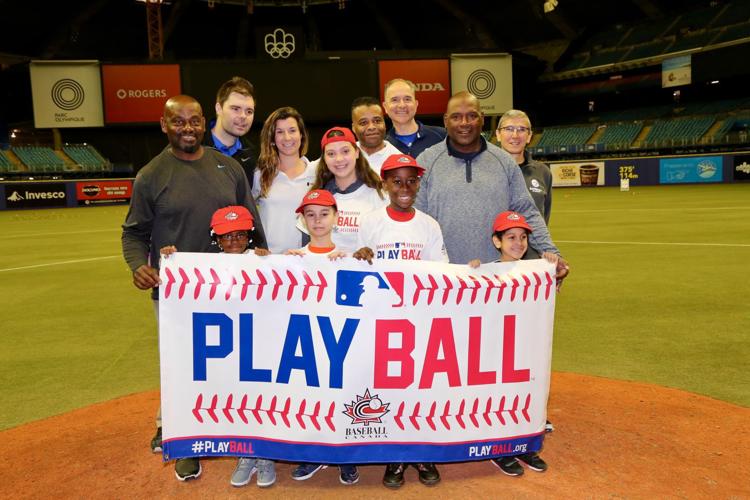 Former Expos Marquis Grissom (left) and Tim Raines (right) open the MLB Play Ball clinic with a few of the 300 players in attendance. 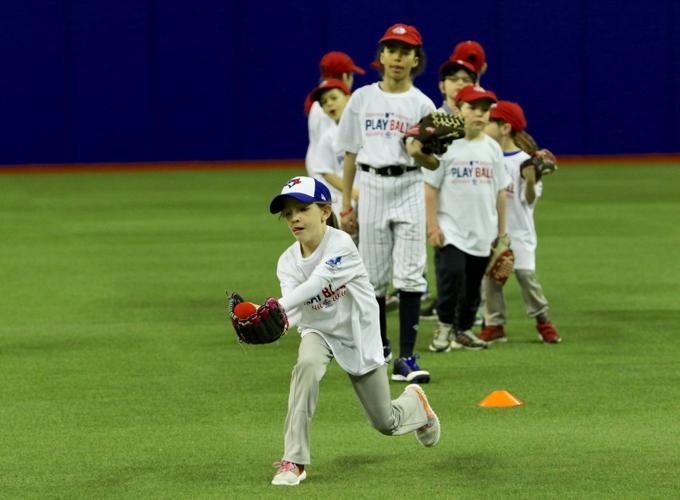 The chance to take part in the clinic was a hot ticket as all 220 spots for Baseball Quebec were snapped up in under 24-hours. 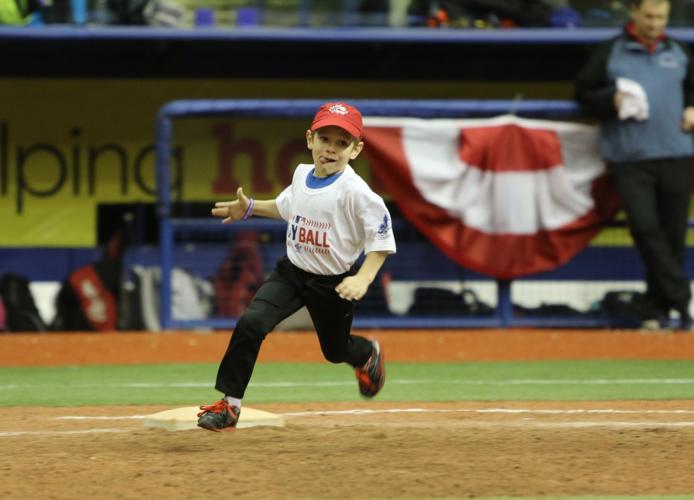 One young participant shows good base running form, hitting the corner of the sack on his way to second.

Former Expos Marquis Grissom (left) and Tim Raines (right) open the MLB Play Ball clinic with a few of the 300 players in attendance.

The chance to take part in the clinic was a hot ticket as all 220 spots for Baseball Quebec were snapped up in under 24-hours.

One young participant shows good base running form, hitting the corner of the sack on his way to second.

Each year since the Blue Jays have started to come to town, the Jays Care Foundation along with Baseball Quebec and Baseball Canada have held clinics for young players at the Olympic Stadium on Sunday morning. This time around, Major League Baseball joined in with their Play Ball program, coming for the first time to Canada. “Play Ball is our signature engagement youth event and we have a great partnership with the Blue Jays and the Jays Care Foundation,” Steven Arocho of Major League Baseball said. “This is really an extension of their efforts to grow the game across the country at all levels but especially with young people. We appreciate that and want to help their efforts. To see so many on the field shows that kids in Canada love baseball and their parents as well. It is great to see the kids and the parents show such enthusiasm.”

The clinic was aimed at players aged 13 and under and allowed the youths to work on their hitting, pitching and defensive skills in a fun event. There were 300 players taking part with 80 from the Jays Care Foundation and 220 from Baseball Quebec, including one player who made a seven-hour trek from Sept Isles to take part. The opportunity to take part proved so popular that the 220 spots were snapped up in less than 24 hours. “For the fourth consecutive year, we are hosting baseball clinics at the Stadium and we are very pleased to be able to count on the MLB, the Jays Foundation and Baseball Canada to collaborate on this event,” Maxime Lamarche, general manager of Baseball Québec said. “This is yet more proof of the credibility of Quebec baseball in the eyes of influential people in the world of baseball. With partners like them, it’s the young people who will be the winners.”

There were several stations set-up around the playing surface, from base running to the home run derby to fielding and mini-games. “This is very cool,” 13-year-old Jeremié Brousseau said. “I feel lucky to be able to be a part of this (event) today.”

Joining in the clinic was former Expos Marquis Grissom and Tim Raines, who took time at a few of the stations that the players were testing their skills at. “I am so happy to be here, I live to teach baseball,” Marquis Grissom said. “The game is a world game and to see so many kids here either working on getting better or trying the game for the first time, I am glad to help out.”

As for Hall of Fame Class of 2017 member Raines, the best advice he left for the players was,” follow your dream, my dream wasn’t to become a major-league player,” Raines said, “It was to be good at something or great at something. If baseball is what you choose, give it every opportunity you can and don’t ever give up.”

Are you considering moving out of Quebec as a result of Bill 96?