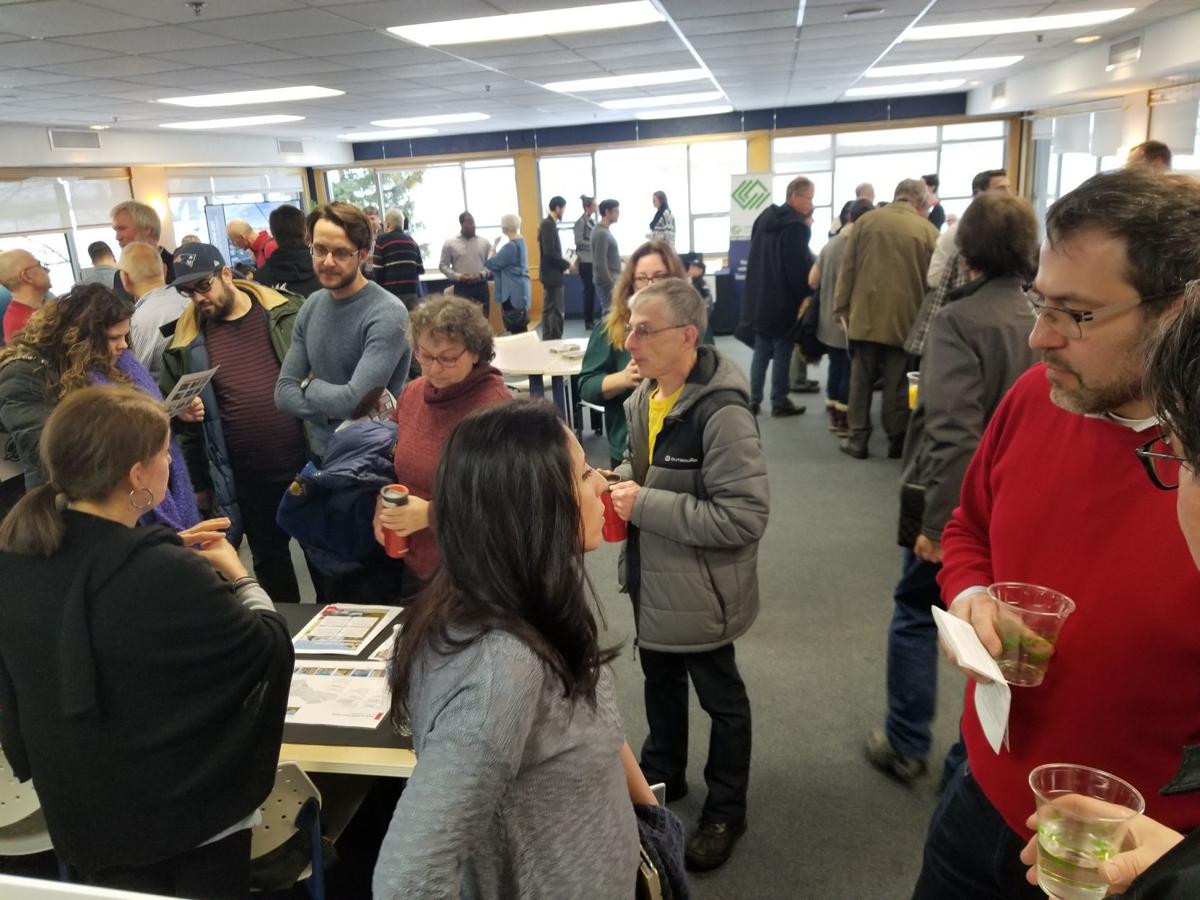 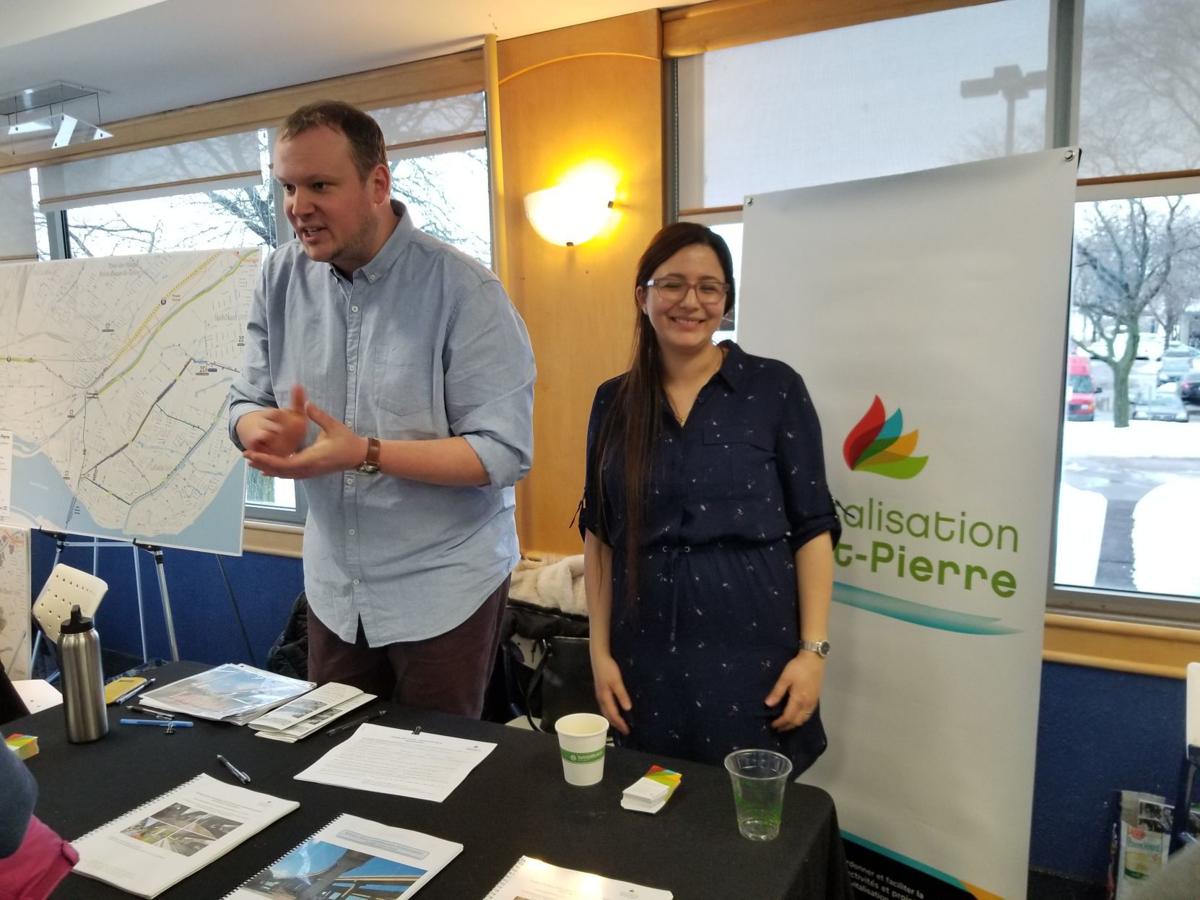 Hundreds of people spent Sunday afternoon on February 24 talking about the 50- hectare plus Lachine East Development at the Maison du Brasseur.

“Finally we have the developers, government and citizens all in the same room,” said Lachine Mayor Maja Vodanovic. “Now we can create the neighbourhood of our dreams together.”

Three commissioners will be in charge of a report due out next summer. Marie Leahey, a coordinator from the Régime de retraite des groupes communautaires et de femmes, leads the commission. She is joined by cultural manager Danielle Sauvage and Les Tourelles Milton Park co-founder Joshua Wolfe.

Hopes remain high for what might be built on the former industrial land over the next twenty years. Several of the organizations that want to be involved in the project staffed tables during the open house.

One of them contained people from a new non-profit association called Imagine Lachine-Est, which wants to ensure that the new Lachine East development becomes an eco-district. More than a hundred citizens have joined so far. UQAM urbanism professor Jean-Francois Lefebvre serves as their president.

“I started working with the group as part of an internship, but I’ve been volunteering with them ever since because I really believe in this project,” said Imagine Lachine-Est coordinator Charles Grenier. “Eco-districts are the hope for the future.”

Grenier handed out pamphlets inviting visitors to the group’s Lachine-East summit. Organizers have added a series of talks in English to make sure that everyone who wants to learn about eco-districts can do so. The summit takes place on Saturday March 9, from 9:15 until 5 at the Guy-Descary culturel complexe, 2901 boul. Saint-Joseph. For more information, visit their website at www.imaginelachineest.org.

At another table were Inass El Adnany and Vincent Eggen from Revitalisation Saint-Pierre. They asked visitors to complete a survey about their vision for a bicycle path to link Lachine and Saint-Pierre through the former industrial area.

Yves Comeau from Villa Nova stood in front of his table to talk to everyone passing by. He said that the company looks forward to continuing to develop its land, despite the clean-up costs, which turned out to be much higher than they once anticipated.

“We carted truckloads of contaminated soil from the property,” said Comeau. “There’s going to be a lot of clean-up necessary on the rest of the land as well.”

Tensions between the government and Villa Nova have eased since tests discovered that the land had not been properly decontaminated despite receiving certification from the Quebec Environment Ministry. The borough itself tested the land after Vodanovic raised concerns. City, borough and company discussions got so heated that the company went into bankruptcy protection while the clean-up took place.

During that same period, co-owner Paulo Catania faced fraud charges. They were dropped last May. A month later, Catania made more positive headlines with his announcement that half of the Villa Nova units on the Jenkins property sold within six hours of coming onto the market.

Comeau said the company remains confident they’ll be able to duplicate that success on the rest of their property.

During the information session that followed the open house, residents expressed concern and hope. One resident asked how the borough could protect local heritage if they couldn’t stop the recent Dominion Bridge demolition. How does the city justify building 4,000 units in a sector that has few transportation options? How much community and social housing will be built? What about schools, day cares and grocery stores?

The next sessions during the OCPM consultation may answer some of those questions. Anyone interested can sign up for small group design workshops at two different libraries.

You can also present a written or verbal submission to the commission. Written submissions are due in March. Hearings will take place during the first week of April. To register, go to the website at http://ocpm.qc.ca/fr/lachine-est.