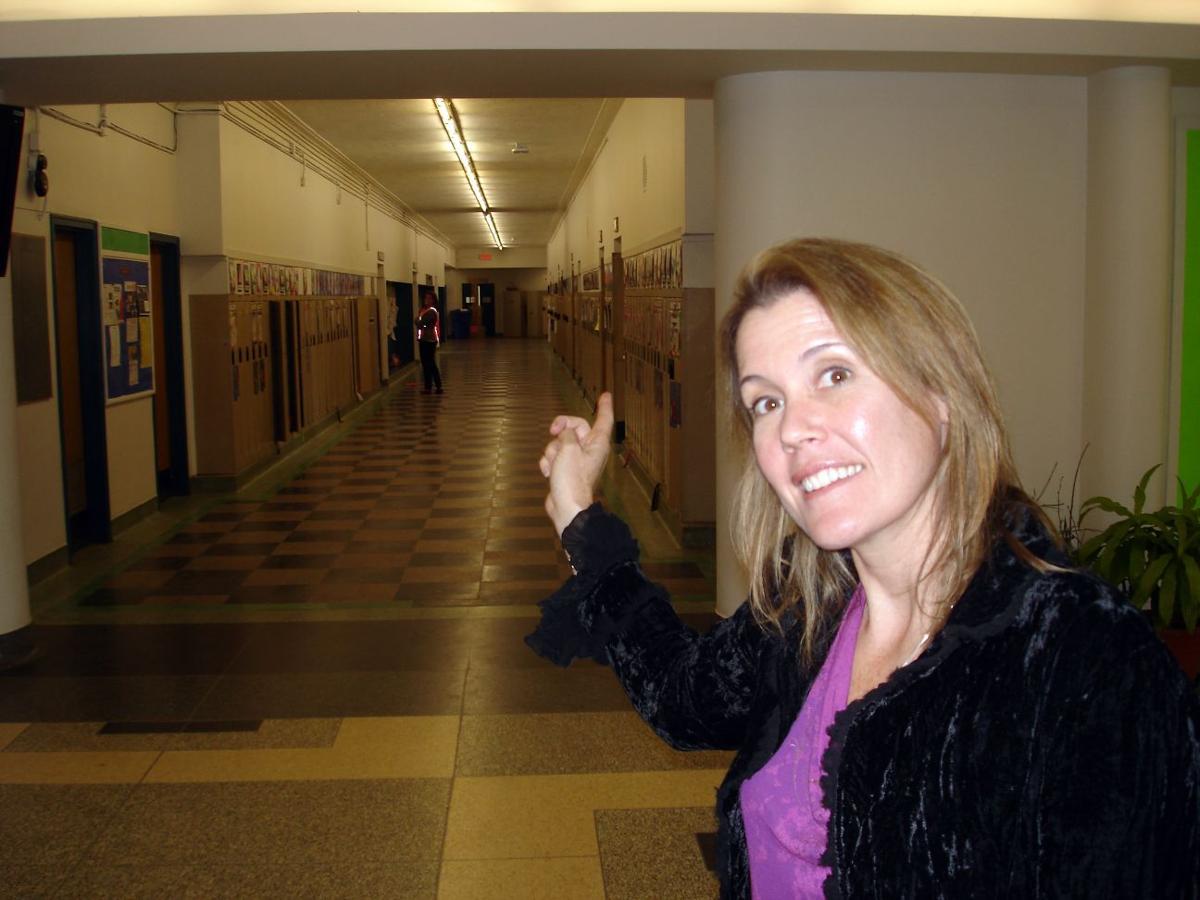 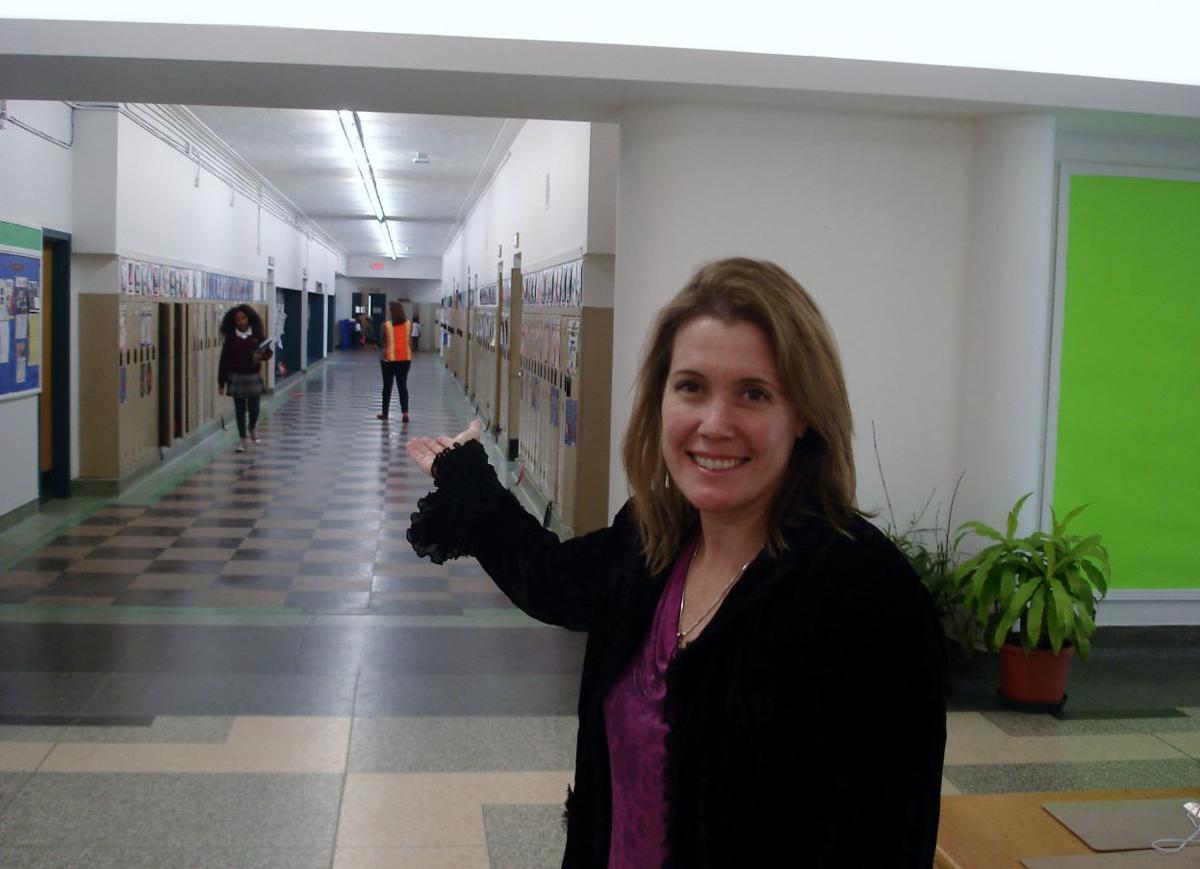 Walking through Royal Vale School with Nathalie Lacroix-Maillette, it’s hard not to pick up the enthusiasm she has for the place. With a fistful of keys and a dizzying path through corridors and stairwells, the affable high school principal recounts the school’s evolution, punctuated by pats on students’ shoulders and smiles to hordes of cafeteria-bound kids.

Our destination lies ahead, a climbing room; a professional rock-climbing wall installed along the entire perimeter of a former racquetball court. “This is just the beginning,” she says, before locking up and moving on to the rest of the new items on the menu for the NDG school.

That wall along with a return to the music room’s original vocation and concentrations in sports, drama and music, are enticing a whole new population to the school, including many from the other side of Côte St. Luc Road.

There were several failed attempts to launch a secondary school, born of nostalgia for the heyday of Côte St. Luc and the defunct Wagar, and the frustration of residents living equidistant between special-status public English high schools that select their students; considered anathema and even indecent to most people with an equitable appreciation for public education.

The last doomed effort was two years ago, when the EMSB scandalously changed its offer throughout the campaign and bungled a process that saw clueless employees and private citizens acting on its behalf to advise parents at public consultation. It was a fiasco that sent families storming out of the room, vowing to turn their backs on the EMSB forever.

Then something happened, says CSL parent Ilana Grostern. “My impression was that attempts to open Wagar were a sort of posturing by the EMSB. It felt like a failed mission from the get-go; they were pitting parent groups (from John Grant, Royal Vale, and Côte St. Luc) against each other, which would make it appear the board was trying, but really ensuring that it wouldn’t happen.” (It was John Grant parent Cynthia Dudley who famously condemned the “Zombie Wagar,” which reared its head every few years to scare the families of some of the board’s most vulnerable students.)

And so Grostern and fellow parent Ayala Aviel led an effort this year to create a movement of CSL parents to try again, but without commissioners, fictitious enrolment targets, select alliances between parents, competing communities, and the insufferable game of chicken between the school board and earnest parents. “Ultimately when we set aside officialdom and took it upon ourselves to fight for a new school, parents rallied around an idea that would not displace anybody.”

Back to Royal Vale, where the school had just introduced cultural math along with upper-grade streams other than physics and chemistry, because Lacroix-Maillette — whose experience borrows from Quebec, Canadian, English, French, private and public sectors — was getting tired of seeing students at their wits’ end. With 300 students in the high school (yet 450 in its elementary section), enrolment was dropping.

The 240-status school (math and science, with entrance exams) had a large number of students facing daunting academic challenges in higher grades, enough to question their futures, she told The Suburban. “It was unacceptable to me that students were in my office crying because they couldn’t handle the work and may have to leave.”

“What are we really here for? To keep graduation rates high, to fill seats? Or to teach students? We’re not for everybody it’s true, but we also believe a good education is well-rounded and includes art, sports and other disciplines.” It’s just a terrific bonus that the new offerings — which also include a Hockey program — meet requirements of many parents across the road.

Next year the school will offer Français Flex, a 30-percent French instruction program in addition to the current 70 percent French, making Royal Vale a real option for those CSL parents, who all along, simply wanted a “regular high school” experience for their kids.

Cynics would say a plan was always afoot to dovetail Royal Vale’s enrolment problems and CSL parent demands. When EMSB deputy director-general Paola Miniaci told the CSL parents the numbers they targeted were unreasonable and Wagar was “off the table” at a winter meeting, it was followed in the same breath by suggestions regarding Royal Vale. Cute? Cunning? Coincidence?

Grostern laments the wasted time and energy. “Why waste so much of our resources over so many years fighting amongst ourselves as parents when everyone knew it wasn’t going to happen? Clearly it was not in the best interest of anyone but the politicians.”

Royal Vale is still a special status school with entrance exams, but there are resource teachers and services available in response to concerns over help for struggling students. Lacroix says she understands there is far more to a student than their entrance exam performance and is forever telling parents to contact her with questions about admissibility. “Once students are here,” says Lacroix, “we do whatever we can to help them succeed.”

Admittedly, the school has suffered from a colossal dearth of marketing at both the community and board level, and appalling neglect of its physical plant. This year’s changes have bumped its profile, along with $700,000 invested to improve the building itself, and next year the school will likely double its Sec 1 classes to four, a success by any measure.

Moreover, it’s now clear that more future changes are possible down the road. “That’s who I am. I am open to suggestions and am not afraid to make changes, and it can only be done with support and expertise of my staff, vice-principals, teachers and the parent community.”

Grostern agrees. “It’s amazing to encounter a principal who is receptive, innovative and will work to make great changes.” For her own child, the school’s offers like a drama concentration “are all the difference between wanting to get up in the morning and go to school to not wanting to go at all and instead shipping her off across the city…They will now open the school that wasn’t earning its keep in the current building to a larger population.”

It doesn’t matter what the zeitgeist was that prompted the moves for Grostern and the many parents she has championed and stewarded in a new social media community on Facebook (Parents for Royal Vale Options). “We got it done,” she says. “That’s all there is to it.”

That prompts a smile from Lacroix-Maillette and a familiar refrain: “And where is your child going next year?”