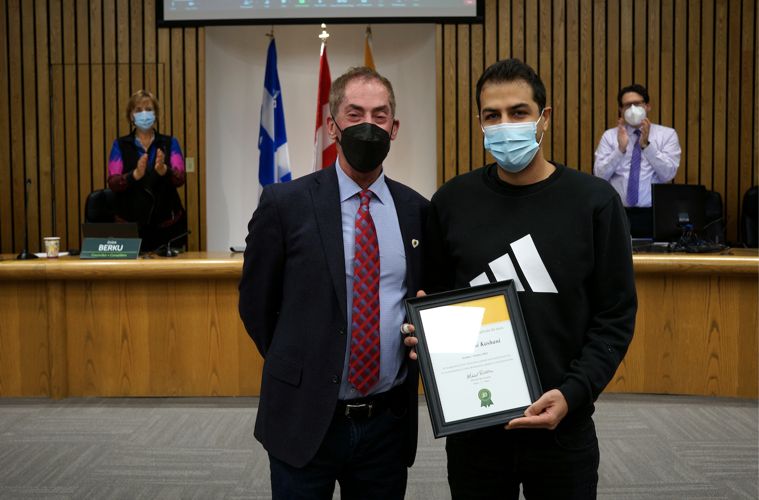 Côte St. Luc council honoured at its November council meeting its Employee of the Month, Sina Salehi Kashani, a lifeguard who recently came to the rescue of a resident who was having a stroke.

During the ceremony, thanks to CSL enabling access to the meeting via Zoom, resident Sharon Zigman was able to thank Kashani from her hospital bed.

“Every month, an employee receives an award for outstanding service,” Mayor Mitchell Brownstein said. “Sharon Zigman was swimming in our pool, doing laps, and she had a stroke. It’s not that easy to notice as a lifeguard that something’s going wrong, unless you’re really attentive. I was a lifeguard for many years and I never encountered that. I had other things, but not that.”

Brownstein said the lifeguard performed a remarkable rescue “to make sure she survived.”

“Hi Sina, thanks for saving my life,” she said with great emotion. “You [deserve] the award. I want to be there to cheer for you because you deserve it.”

And then Zigman was there, virtually, via Zoom.

“I’m feeling good about being here,” she said after being welcomed by Brownstein.”I think Sina is wonderful and he’s very humble and he does a great job, and all the other lifeguards say he’s terrific and one of the best. I was just lucky he happened to be there when I was in trouble. I hope the next time I go to the pool, that he’s going to be there watching me and then I won’t be afraid that the same thing will happen again!”

Kashani responded with his best wishes for Zigman’s recovery.

“I want to see you at the pool,” he told Zigman.

“I’m coming to the pool if you’re there because I know you’ll save me again,” she said.