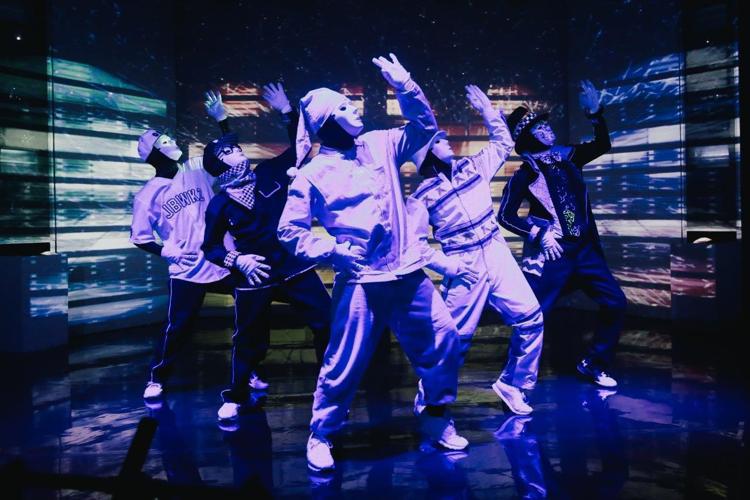 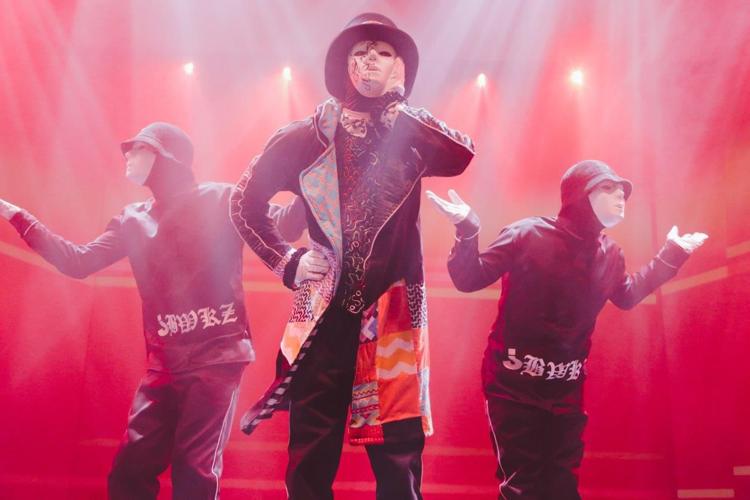 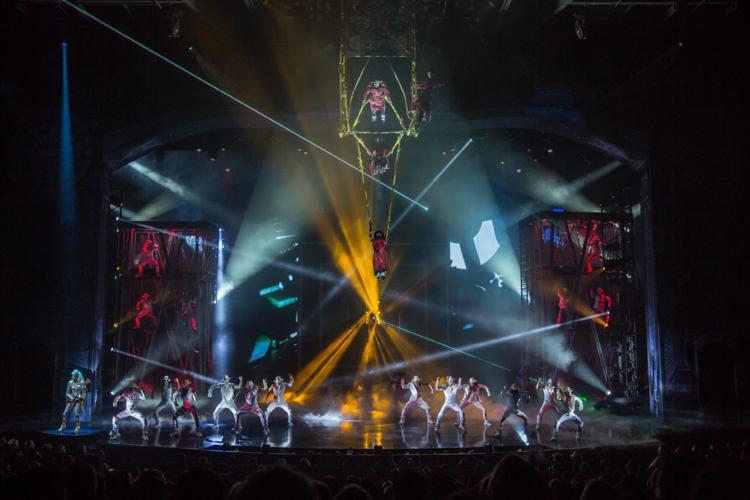 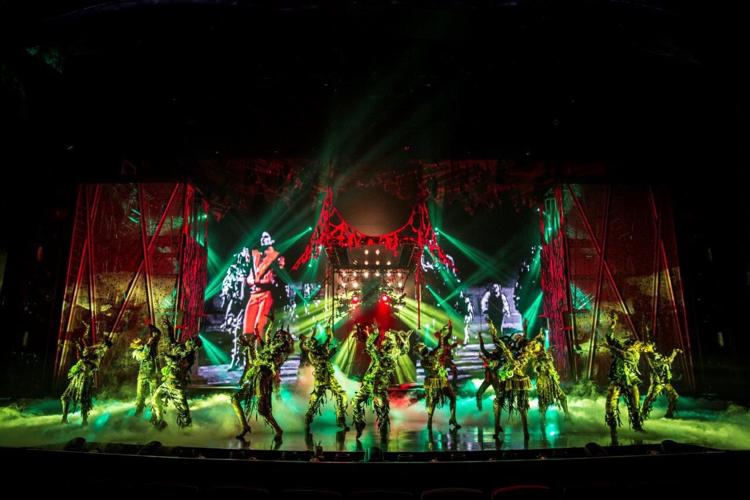 The presentation of "Thriller." 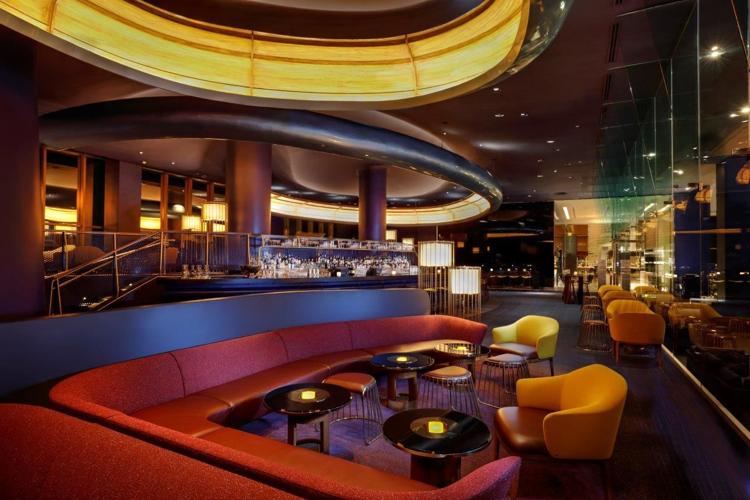 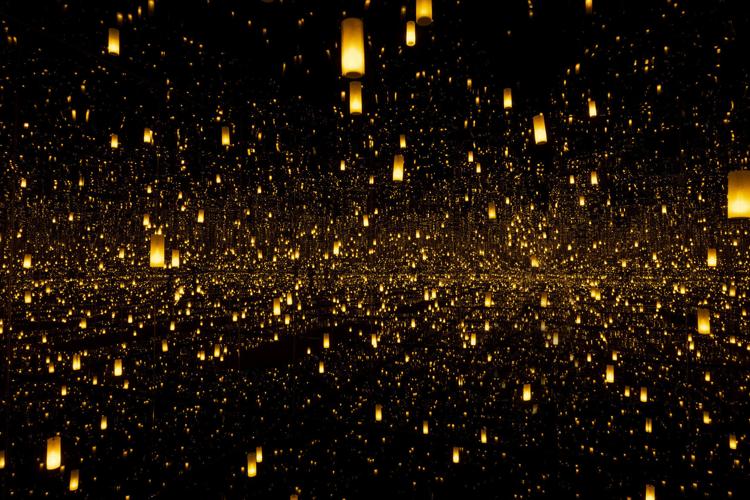 The Infinity Mirrored Room at the Bellagio Gallery of Fine Art. 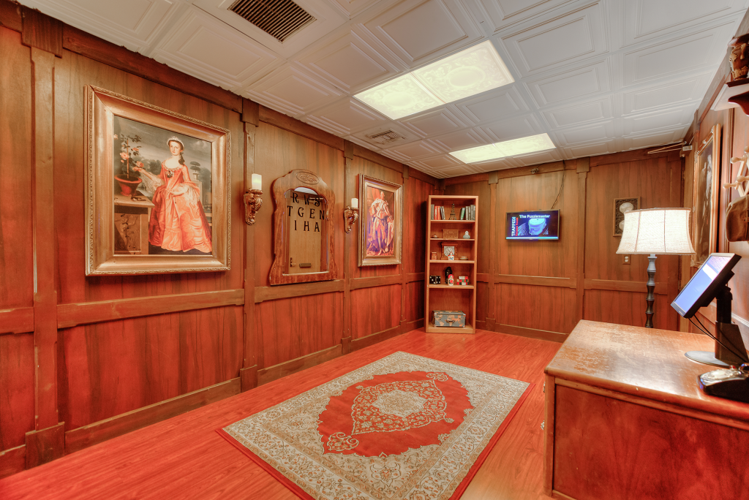 LAS VEGAS- There is lost to do in the City of Las Vegas, Nevada. We had less than a week on the ground, so here are some suggestions.

We were thrilled to see Jabbawockeez  for the first time after their energizing 70-minute show. The Jabbawockeez first caught the nation’s eye when they competed on  America’s Got Talent  in 2006, before ultimately winning the grand prize on the first season of the MTV reality show  America’s Best Dance Crew,  produced by Randy Jackson.

Their live show at the recently renovated Jabbawockeez Theater at the MGM Grand Hotel & Casino on the Vegas Strip is absolutely fantastic!

Their show, JREAMZ, takes audiences on a journey of mesmerizing sights and sounds, entertaining audiences with a dynamic mix of choreography, music, videos, characterization, and special effects. The imaginative production finds a way to seamlessly combine dance, drama, and a surprisingly effective amount of comedy.

Featuring the signature white masks and intricate dance moves that have positioned the group as the world’s most influential dance crew, Jabbawockeez is cutting-edge entertainment at its best. JREAMZ has been voted the “Best Family Show” and “Best All Ages Show” in Las Vegas for three consecutive years.

Donning expressionless white masks and white gloves, Jabbawockeez somehow manage to achieve the perfect balance between blending together as a unified group when necessary and also giving each member a unique character to play. They do not simply use the stage, but navigate through the audience, integrating us into their show and in fact taking selecting several volunteers to take part in their comedic routines.

Over the years, they have appeared on numerous television shows, including “Dancing With The Stars”, “So You Think You Can Dance”, “The Ellen DeGeneres Show”, “Regis & Kelly”, “The TODAY Show”, “E! News”, and “America’s Next Top Model.”

The dance crew was formed in 2003 by Kevin “KB” Brewer, Phil “Swagger Boy” Tayag and Joe “Punkee” Larot. Just a year later, the group had grown to include Jeff “Phi” Nguyen and Rynan “Kid Rainen” Paguio, who still perform in the group. In 2013, the dance troupe also added Tony “Transformer” Tran. Over the life span of Jabbawockeez, there have been as many as eleven artistic creators to funnel energy into their synchronized dance routines. The show is designed to be appropriate for all ages—those four years or older must purchase a ticket; three and under can be admitted as a lap seat.

Jabbawockeez perform Thursday through Monday at both 7PM and 9:30PM. Tickets are priced at $49.99, $72.99 and $82.99 (not including applicable service charges and taxes). A Golden Circle ticket, with the best seats, a complimentary cocktail, and an exclusive Jabbawockeez merchandise item, is available for $110 (not including applicable service charges and taxes). A VIP Package including a post-show meet and greet, photo opportunity with three cast members from the show, and a Jabbawockeez Swag Bag, is available as an add-on to any ticket category for $55. Tickets are available for purchase at any MGM Resorts box office, by phone at (702) 531-3826 or (866) 740-7711 and online at mgmgrand.com or ticketmaster.com. For more information, visit jbwkz.com or connect on Twitter @Jabbawockeez and on Facebook.

When in Vegas, experiencing at least one Cirque de Soleil production is a must. As proud Montrealers, we did just that and chose the Cirque’s incredible Michael Jackson ONE , an awe-inspiring show that fuses acrobatics, dance, story-telling, and visuals, taking the audience on an immersive journey through the music and spirit of Michael Jackson. Shows take place at the Mandalay Bay Resort and Casino from Fridays to Tuesdays at both 7 pm and 9:30 pm, while Wednesdays and Thursdays are dark days. Driven by the late King of Pop’s powerful, multi-layered music – heard like never before in a riveting, state-of-the-art surround-sound environment – ONE takes the audience through a series of seamless visual and musical tableaux.

The talented cast of 63 dancers and performers quickly reel you in, taking over the stage and at times even the audience with their infectious energy and brilliant tricks. You will repeatedly find yourself gasping in disbelief at the magic taking place on stage.

This show captures the essence, soul and inspiration of the King of Pop, celebrating a legacy that continues to transcend generations. You will surely be captivated by the aerial acrobatics and special effects during this unforgettable performance, while trying not to sing along to Jackson’s most popular songs, from “Smooth Criminal” to “Thriller” (a particular highlight).

ONE somehow manages to get better with every routine. Each time you think that there cannot possibly another trick left to perform, someone will fly through the sky or trampoline upside down and once again, you will find yourself amazed.

While the hits in Michael Jackson ONE have been rearranged to suit the show, they remain very close to the album versions and are treated in a highly cinematic fashion. Kevin Antunes, who was also the Musical Designer on Michael Jackson THE IMMORTAL World Tour, took the multi-track master recordings and manages to make audience members feel the music is surrounding them, a beautiful musical assault coming from all directions. In fact, each of the theatre’s 1,804 seats has three speakers, leaving the room with a total of 5,412 seat speakers!

In Michael Jackson ONE, the video content is also an integral part of the storyline, featuring key aspects of Jackson’s career, including some images from his younger days as a member of Jackson 5. The theatre is equipped with 26 projectors, which display video content on the stage and around the proscenium. Not only that, but there are also 11 TV monitors and a 40 feet-wide, 30 feet-high LED wall.

This show, in its technical and energized glory, truly is not something that you want to miss.

For ticket information call 877.632.7400 or 800-745-3000. Go to www.cirquedusoleil.com/mjone or www.mandalaybay.com. Visit the Michael Jackson ONE box office, the Mandalay Bay Events Center box office, or any of the MGM Resorts International box offices.

After Michael Jackson ONE, you can walk just a few steps over to the Skyfall Lounge  at the Delano, which is located within the same Mandalay Bay facility. Why does Skyfall stand out amidst the large number of bars located along the Strip? Skyfall is known for its panoramic overlook of the city, its dramatic interiors, and its creative plates and artisan cocktails. There is no cover, nor are reservations required. The 180-degree views make it possible for guests to sip a glass of champagne while watching the desert sunset, or to party as DJs spin upbeat music in the vibrant space from 10 pm until closing.

Every evening (7:30-8:30 pm), those who stay at the hotel are treated to a special champagne toast at Skyfall Lounge. A Delano Las Vegas room key must be presented to receive the complimentary amenity. Hours are Monday to Thursday and Sundays from 5 pm to midnight, and 5 pm to 1 am on Fridays and Saturdays. Info: 877-632-5400

The beautiful Bellagio Gallery of Fine Art (BGFA) is committed to presenting intimate exhibitions featuring works by some of the world’s most compelling artists.

Since opening in 1998, the gallery has presented exhibitions of artworks and objects drawn from internationally acclaimed museums and private collections. I was excited to learn that through April 28, 2019, the BGFA is presenting two installations by renowned artist Yayoi Yusama, Infinity Mirrored Room – Aftermath of Obliteration of Eternity and Narcissus Garden. An immersive experience for visitors, Yayoi Kusama offers a unique wonderland of lights and reflections where guests become part of the artworks and can experience Kusama’s exploration of infinite space.

Narcissus Garden has been re-installed and commissioned in various settings since its creation more than 50 years ago. This iteration is comprised of 750 stainless steel silver globes that create an infinite lake that distorts images of reality reflected on the surface of the 12-inch orbs.

I was particularly looking forward to experiencing the second exhibition— Aftermath of Obliteration of Eternity is a room of infinite, shimmering lights. These mirror rooms have taken over the internet, with people posting artistic photos of them experiencing exhibits of this nature across the world. In this exhibit, guests step into an enclosed room to become immersed, as an array of lights ignite a mirage mirrored on every surface, representing the eternal cycle of life over the span of 45 seconds. The space represents Kusama’s lifelong obsession with the dissolution of the self into the infinite. Note that this installation may trigger seizures for people with photosensitive epilepsy, and this experience should be bypassed by people with sensitivities to flashing lights or dark, enclosed spaces.

Last year in Montreal, I experienced my first-ever escape room. Having really enjoyed the experience, I looked forward to trying one in Las Vegas, so we visited Trapped: A Real Life Room Escape Adventure. This location was launched in 2015 and is centrally located at 4760 Polaris Avenue, a quick drive from the Strip.

For those who have never experienced an escape game of this nature, it involves a group of people being placed in a room where they must use all elements present to solve a series of puzzles, find clues, and complete the objective within a set time limit. It is a great bonding activity, as it requires a lot of teamwork in order to succeed. The recommended minimum age to participate is 12 years old. All rooms cost $35 per person for regularly scheduled times.

There are currently two rooms, with a third one on its way, at this location. We chose The Lair of the Puzzlemaster. What is the scenario? You are your teammates are federal agents tracking an international criminal known as “The Puzzlemaster.” You have found his hidden lair and are moving in to take him down, but you have to also avoid falling into his many traps. This game is good for anywhere from three to eight participants.

The game is very well constructed—my favorite escape room experience thus far. It thoroughly challenged us, but as three individuals, we were able to escape in the nick of time.

“We as a company have been open since 2015,” said manager Renton Wilson. “We began with one location in Upland, California in 2015 and have since expanded to include a location in San Dimas, California, as well as Las Vegas. We opened in Las Vegas in July of 2018 and our mission is, and always has been, to provide a high quality and fun experience for our customers”