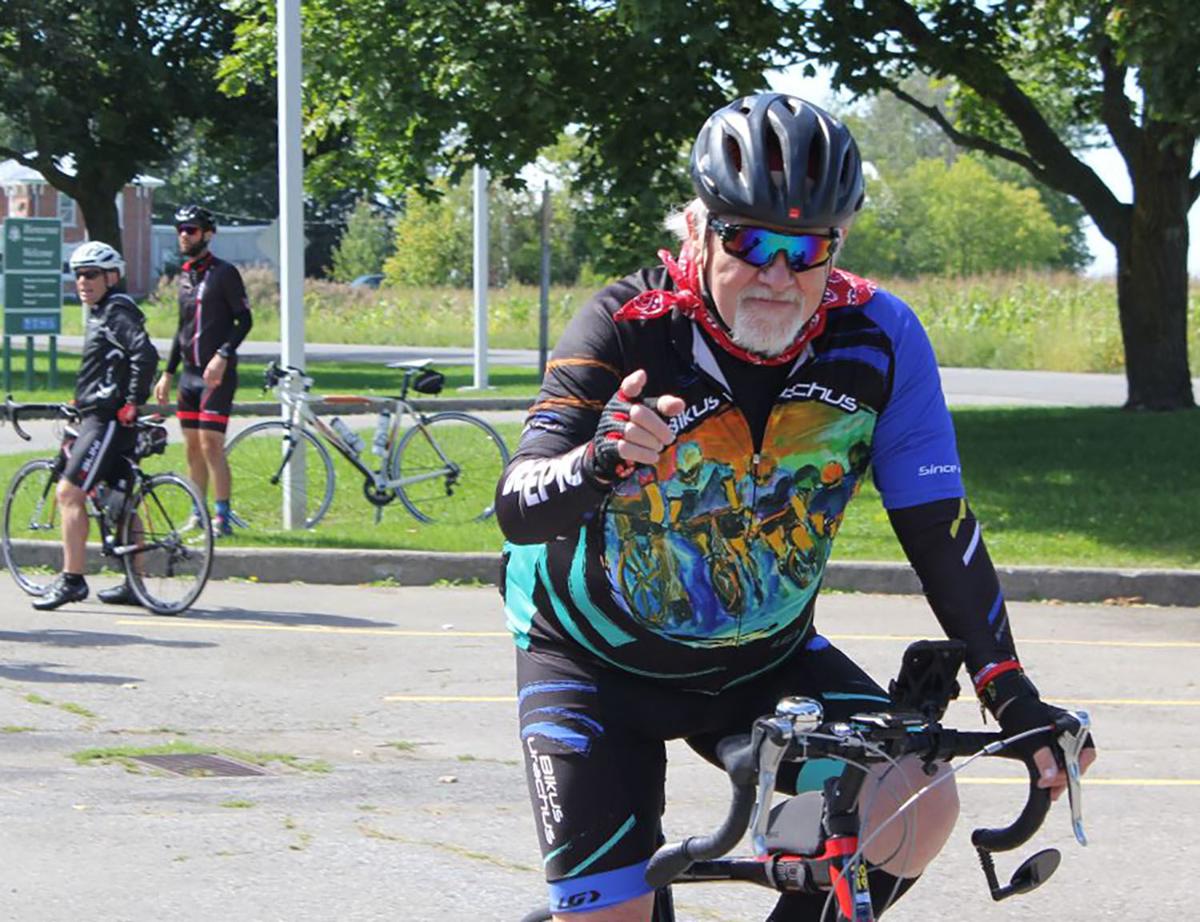 Frank Elekes wearing the Bikus Urachus team jersey which features one of his paintings. Elekes, age 74, only added painting to his list of hobbies a few years ago. 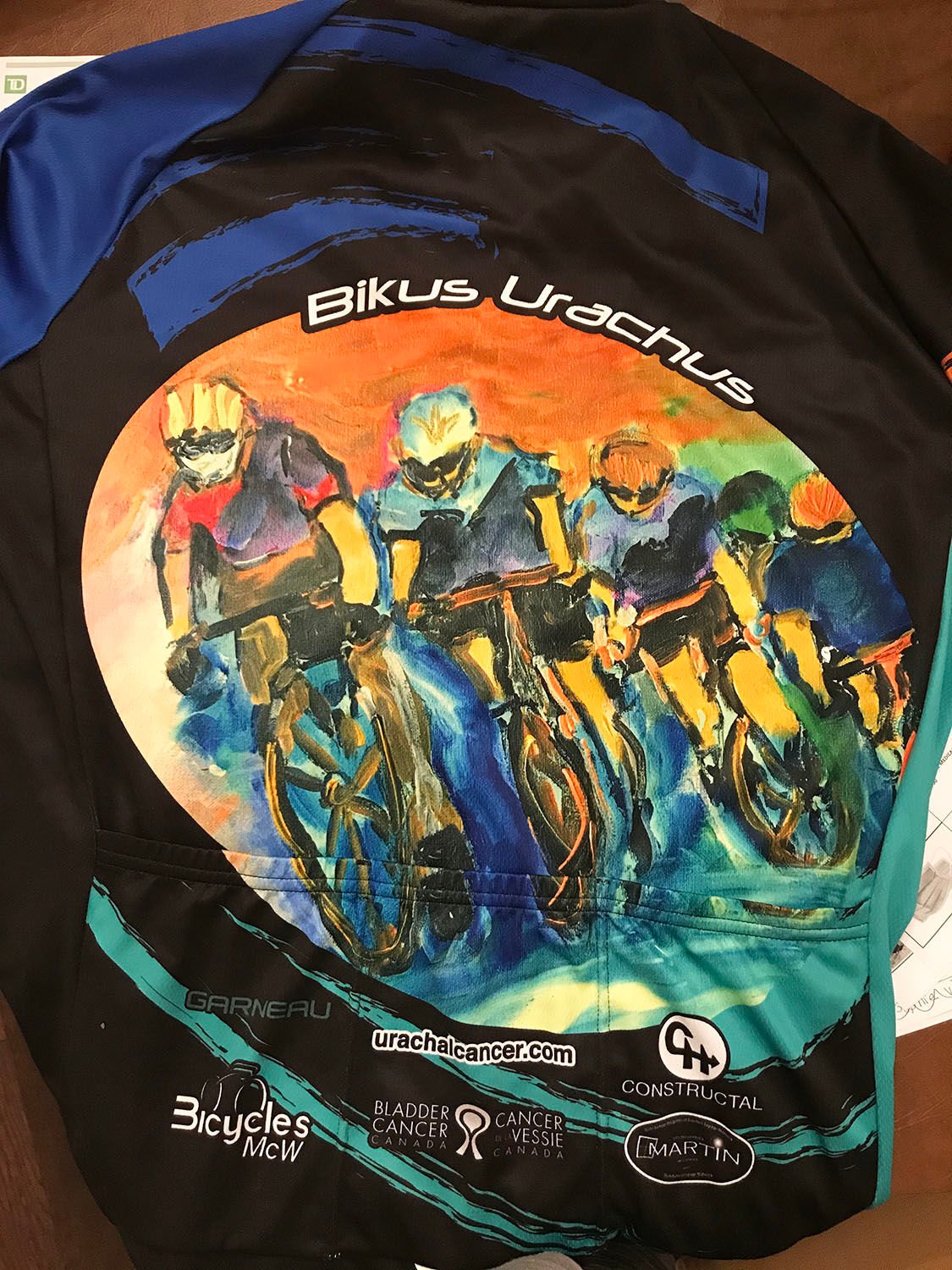 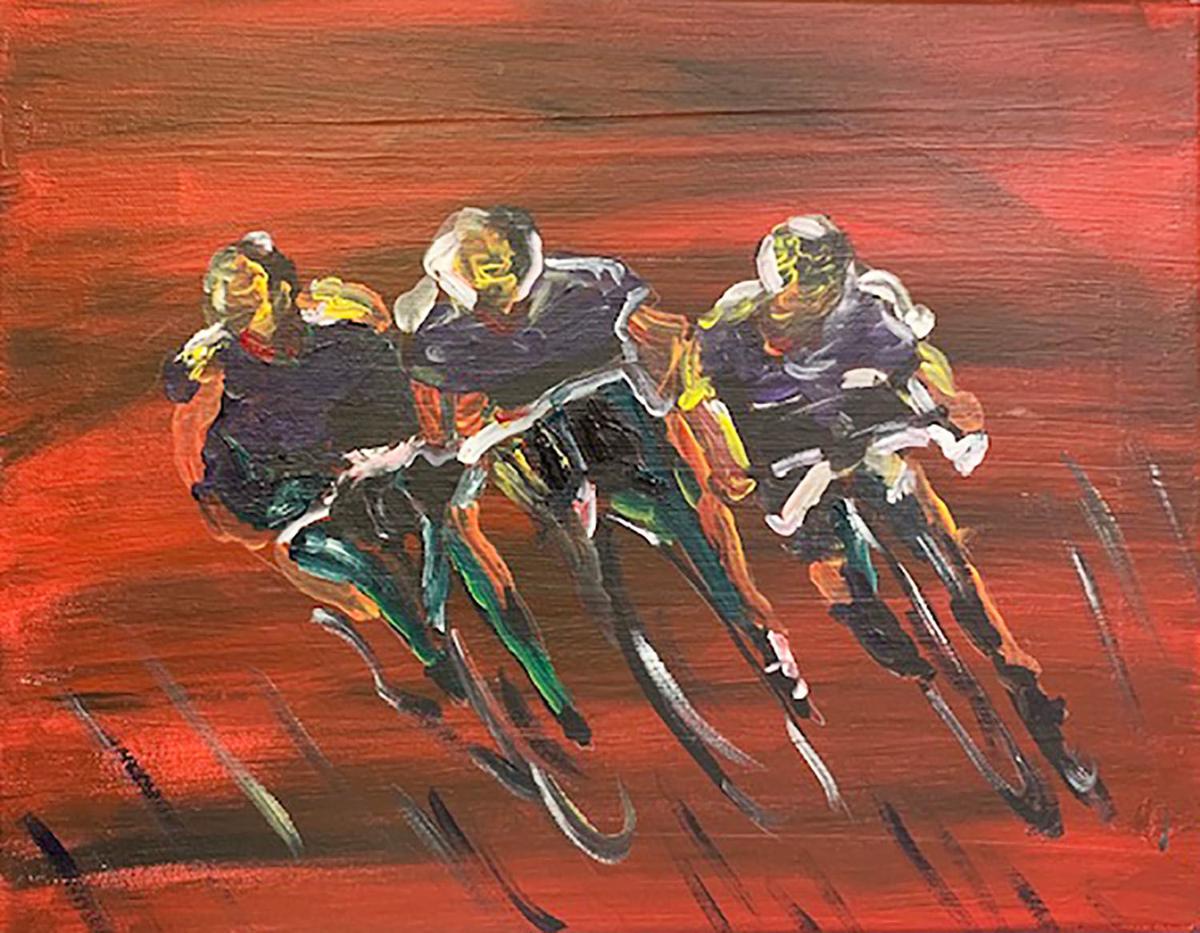 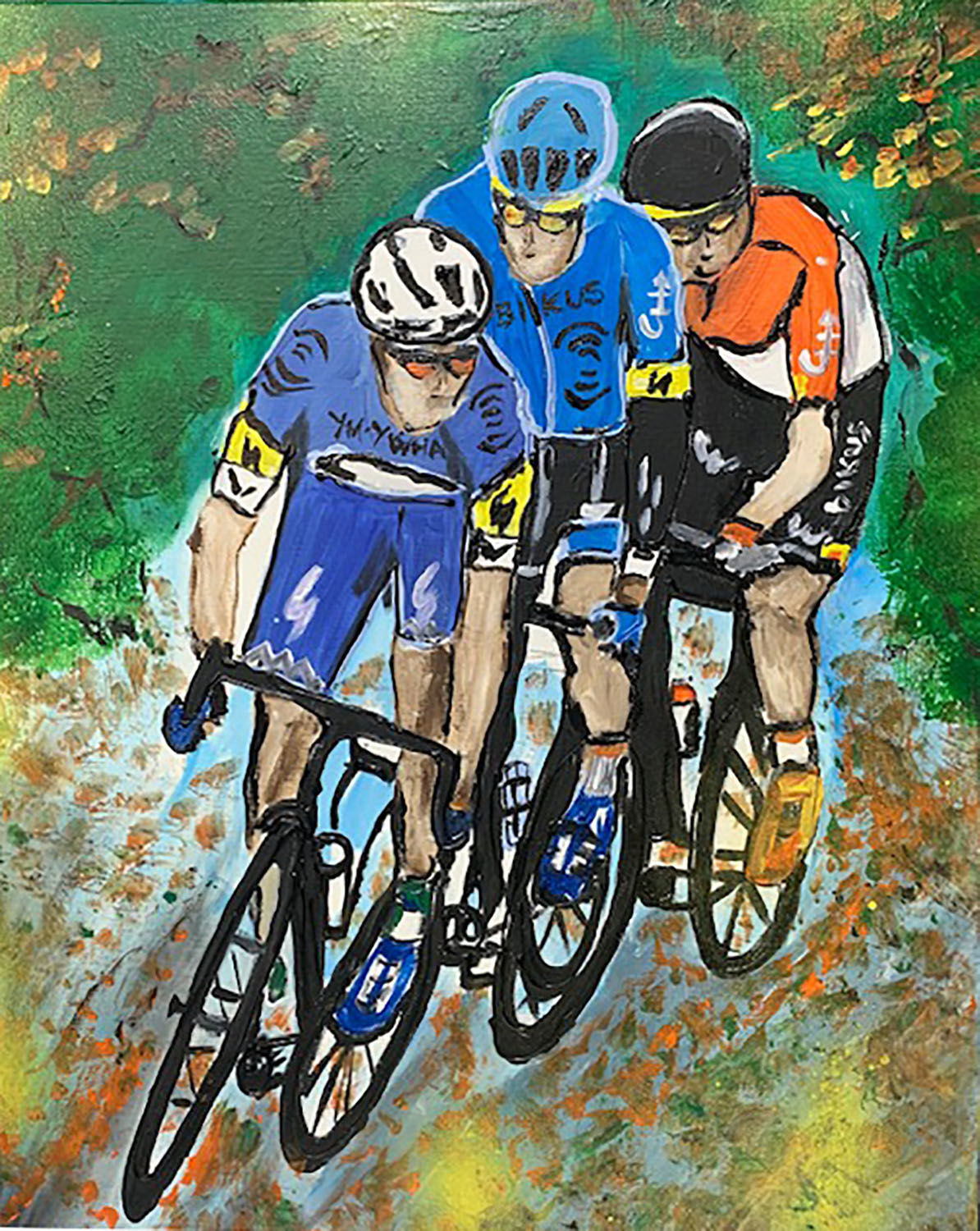 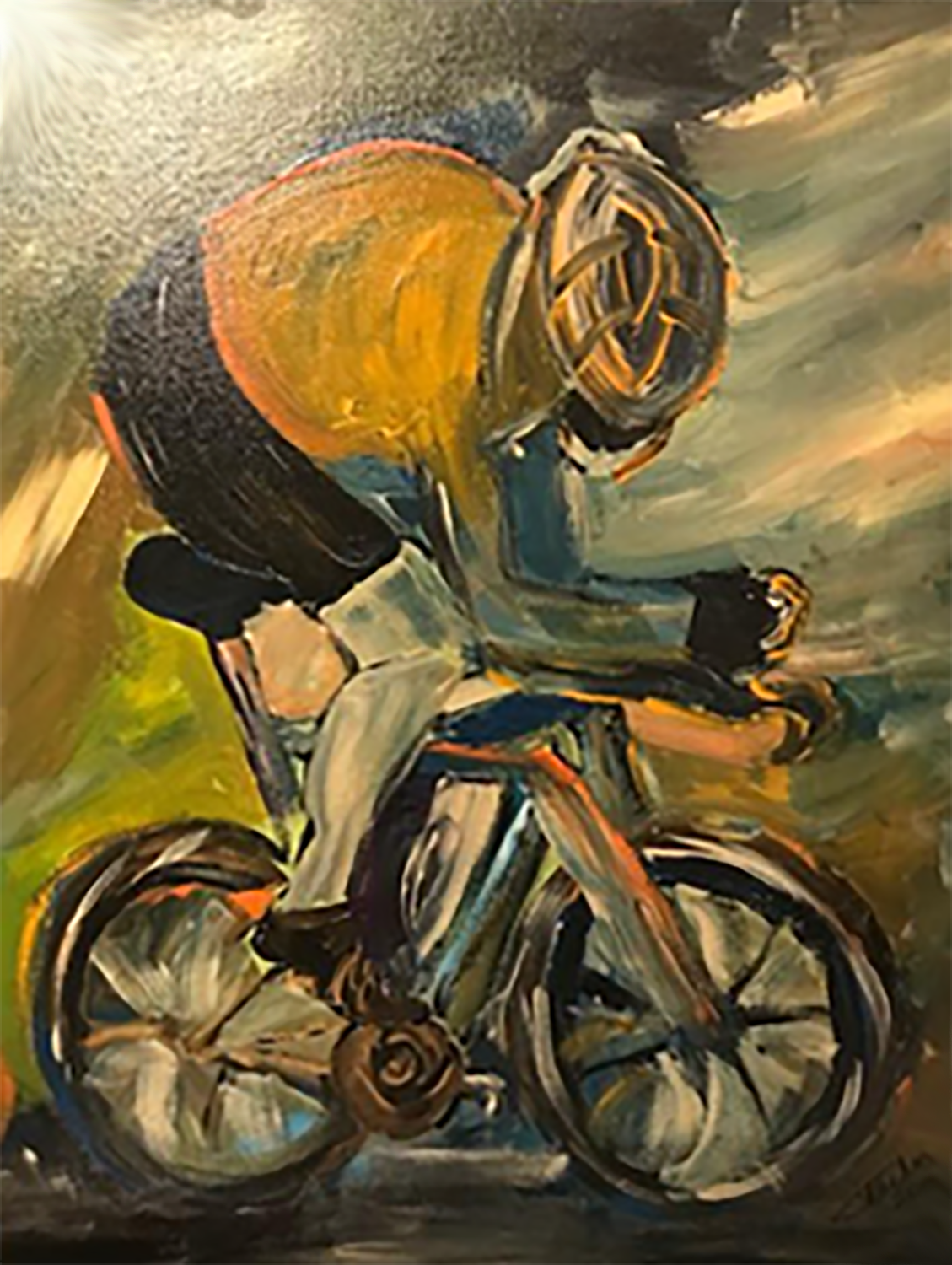 Most paintings sell for between $200-$$300 and to date he has donated about $20,000 to cancer research at the Jewish General Hospital. 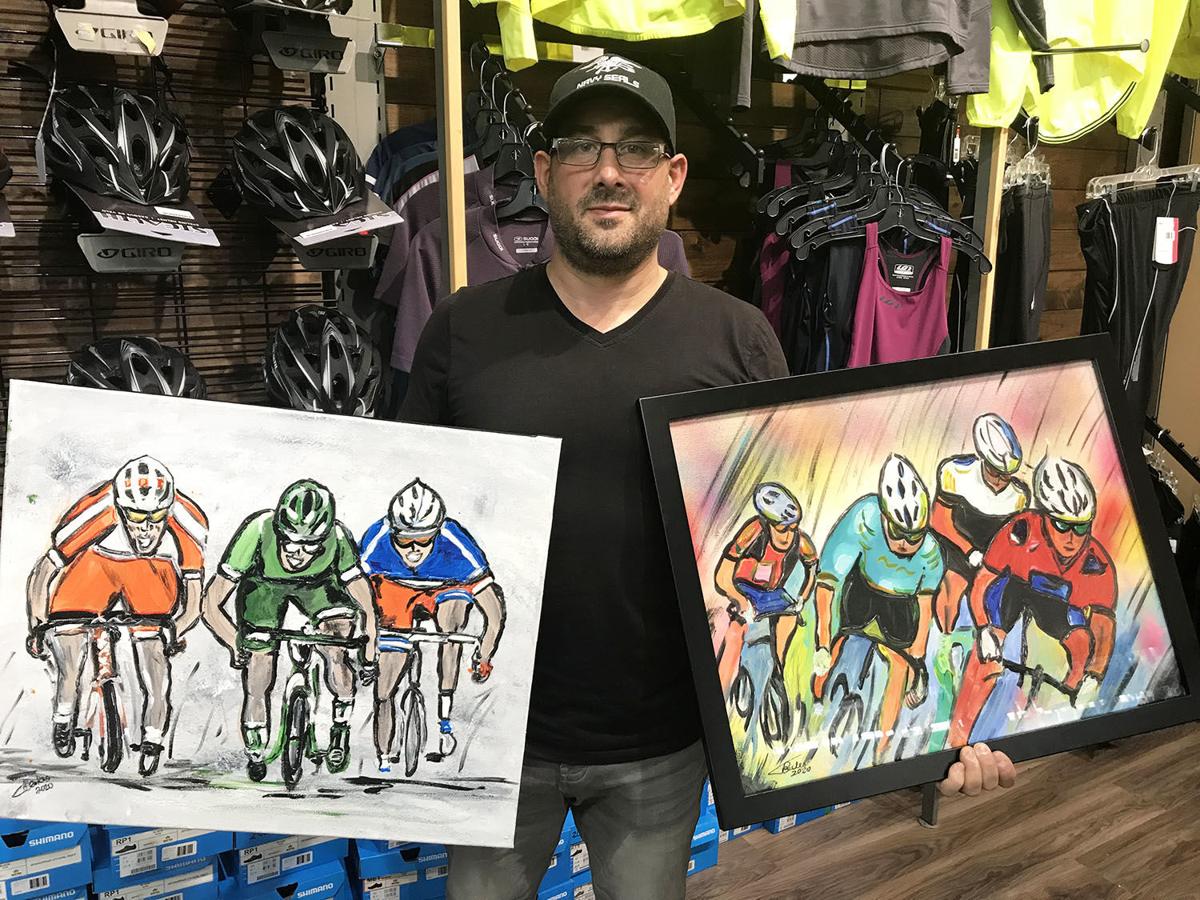 Sal Mastantuono, one of the owners of Bicycles McW in NDG, with two of the paintings he commissioned Elekes to produce for his Sherbrooke St. store. 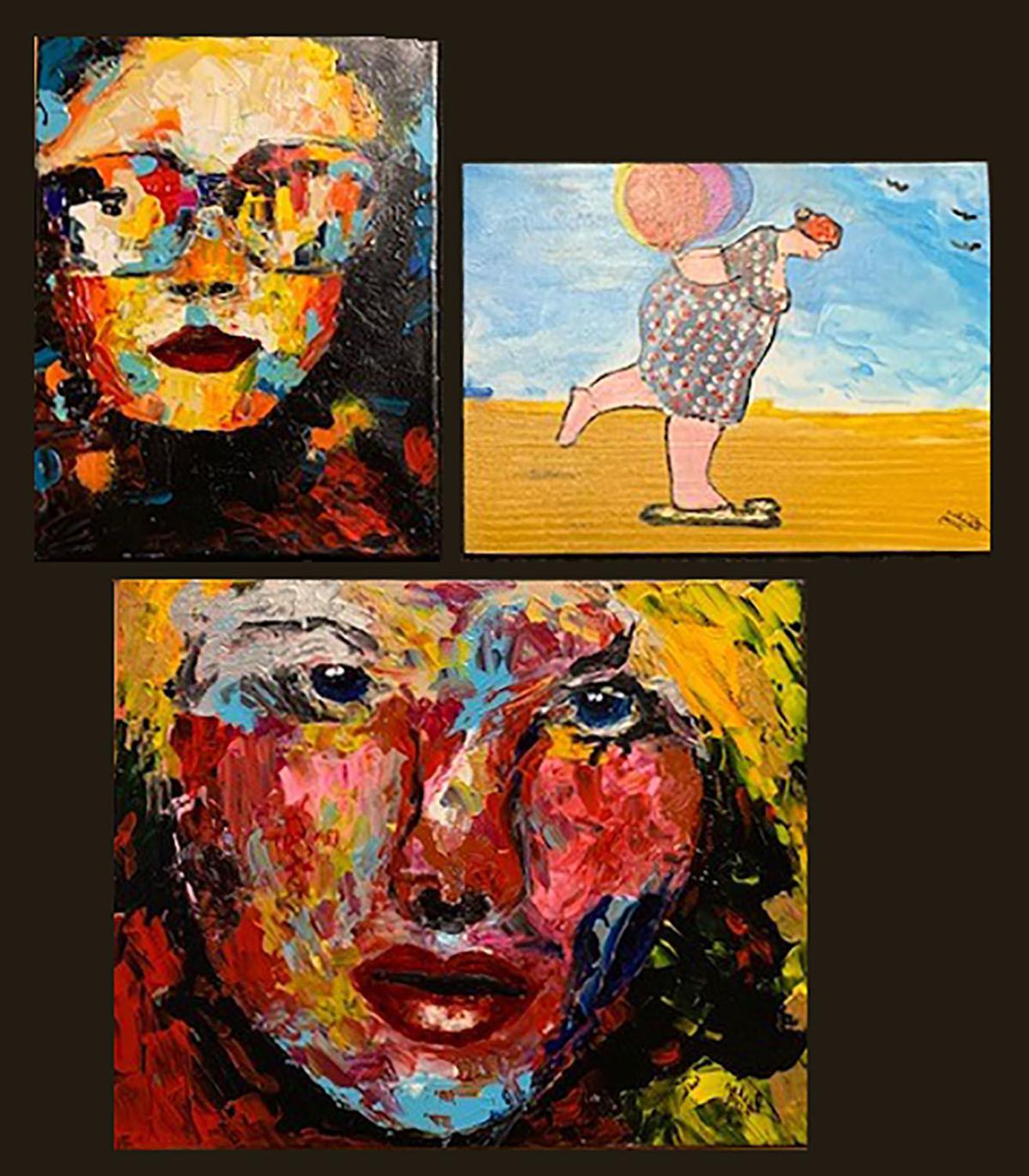 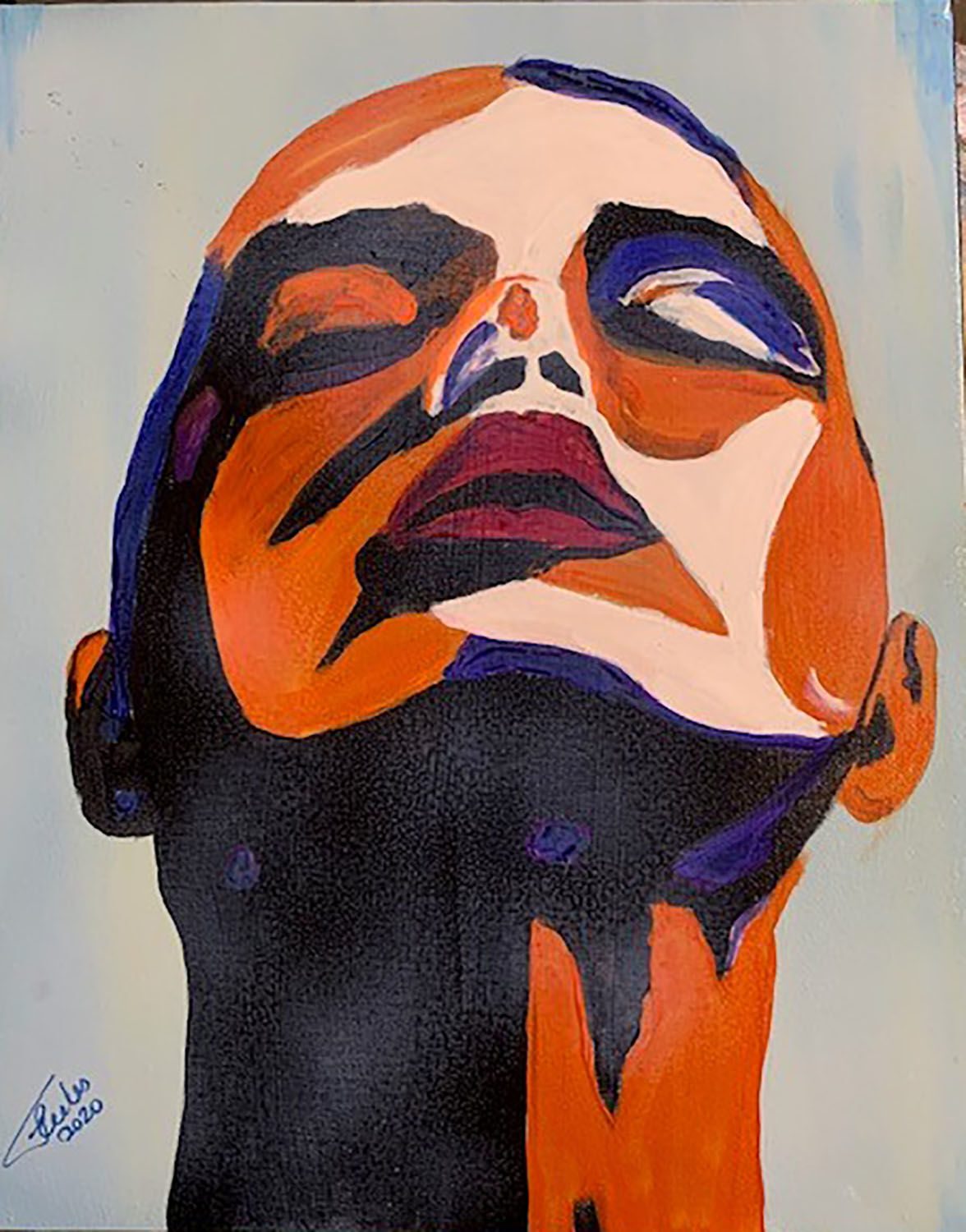 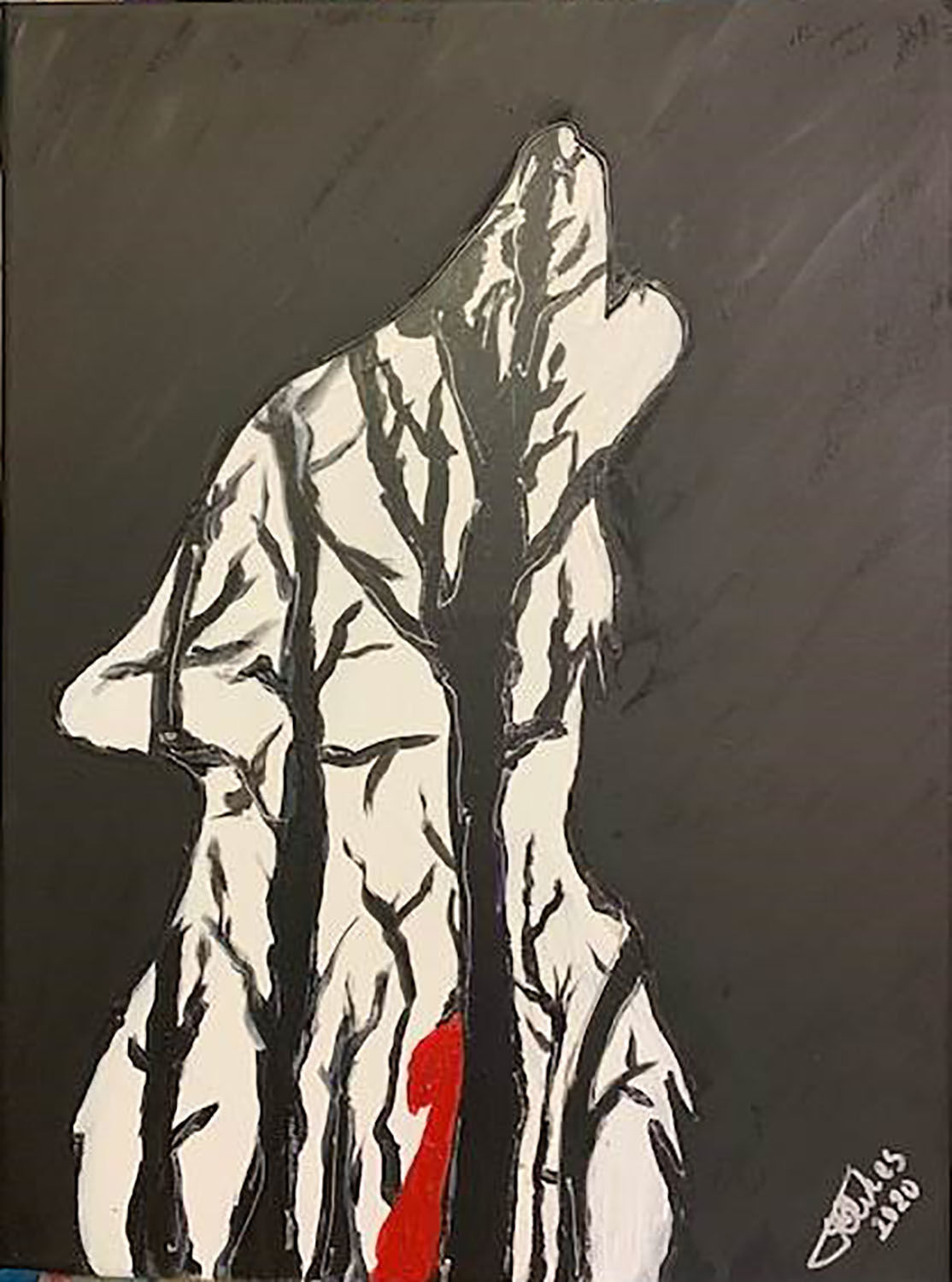 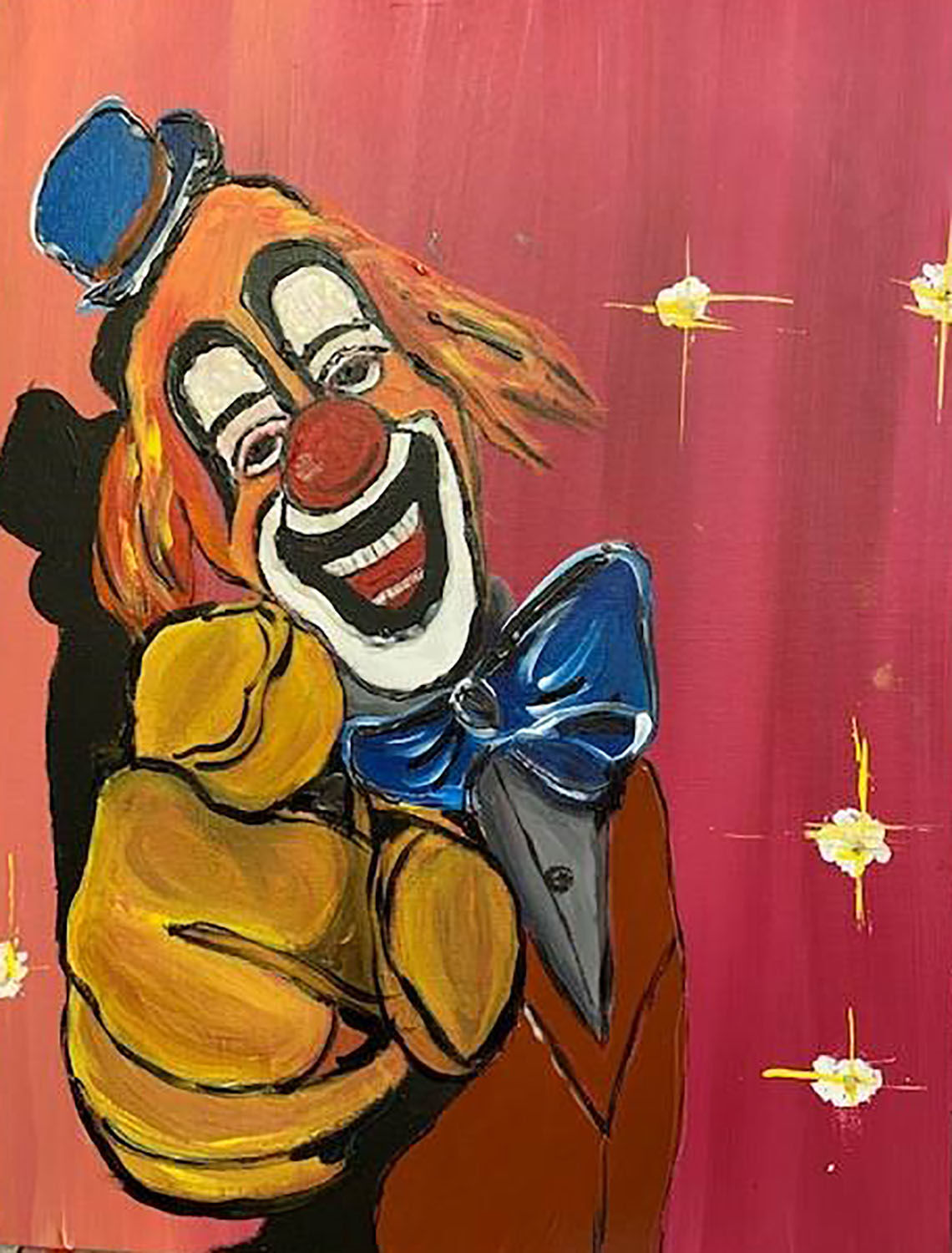 Frank Elekes wearing the Bikus Urachus team jersey which features one of his paintings. Elekes, age 74, only added painting to his list of hobbies a few years ago.

Most paintings sell for between $200-$$300 and to date he has donated about $20,000 to cancer research at the Jewish General Hospital.

Sal Mastantuono, one of the owners of Bicycles McW in NDG, with two of the paintings he commissioned Elekes to produce for his Sherbrooke St. store.

Walking into Frank’s office feels a bit like walking into an art gallery. There are paintings everywhere and all you want to do is stop and admire each one of them, just as if you were in a gallery. The paintings are stunning. Some are half completed, some are just rough sketches, but they are everywhere. And it’s rather unexpected because Frank Elekes, the artist, runs a construction supply company.

Although he works full time, Elekes, age 74, only added painting to his list of hobbies a few years ago. An avid cyclist, Elekes is also a member of a bike team named Bikus Urachus that regularly takes part in the annual Enbridge Ride to Conquer Cancer, a two-day, 230-km trek from Montreal to Quebec City to raise money for cancer research.

We met Elekes several years ago when my husband, Phil Anzarut, formed the Bikus Urachus team. My husband had just finished treatments for cancer of the urachus which is a small tube behind the belly button. Elekes joined the team on Day 1 and has been a great supporter since then.

Many of his paintings are bike-themed and, naturally, many of the cyclists want to buy them. And if you ask Elekes about making a purchase, he’ll answer in a scruffy voice: “Sure, pay me whatever you want. I give all the money to cancer research.” This response just makes you want to pay double the amount.

The Bikus Urachus team rides most weekends and the members spend hours bonding on the bikes, joking around while Elekes films ‘Seinfeld’-like clips for Facebook. This makes the time and the kilometres pass quickly. You can bike 50 or 60km and not even notice as you laugh your way through the bike trails. All of these moments give Elekes more ideas for his paintings.

Most paintings sell for between $200-$$300 and to date, he’s donated about $20,000 to cancer research at the Jewish General Hospital. Elekes said he didn’t plan this initiative; he just tries to clean up the office and his car when they get too full.

This summer, like most other charity events, the ride to Quebec City was cancelled. But Elekes and team Bikus Urachus planned their own grass-roots ride — a 125-km loop from Parc Loiselle in Mercier on the south shore to the US border. Forty riders took part on September 12. One of his paintings, showing the cyclists pushing to finish line, was featured on the team jersey. The cyclist at the front might even be wearing a mask, which is a nod to the safety guidelines brought on by this year’s COVID-19 pandemic. One masterpiece now made its way to the wardrobe and is proudly worn by 40 cyclists.

Sal Mastantuono, one of the owners of Bicycles McW in NDG, was at the September 12 ride tuning up the team’s bikes and was so impressed with the event, as well as the painting on the team jersey, that he commissioned Elekes to produce a series of paintings for his Sherbrooke St. store. Mastantuono also shared with us his own recent scare with cancer and why Bicycles McW is so proud to be part of the team.

Confidence and creativity are now inspiring Elekes to experiment with other themes like nature paintings, abstracts, and ladies dancing. Kudos to him for all that he does. Kudos to an avid cyclist with a creative flare — and a big heart.

To purchase a painting for a good cause, visit his Facebook page at https://www.facebook.com/frank.elekes

Couldn't be more proud of Frank, a huge contributor to the Bikus Urachus team.