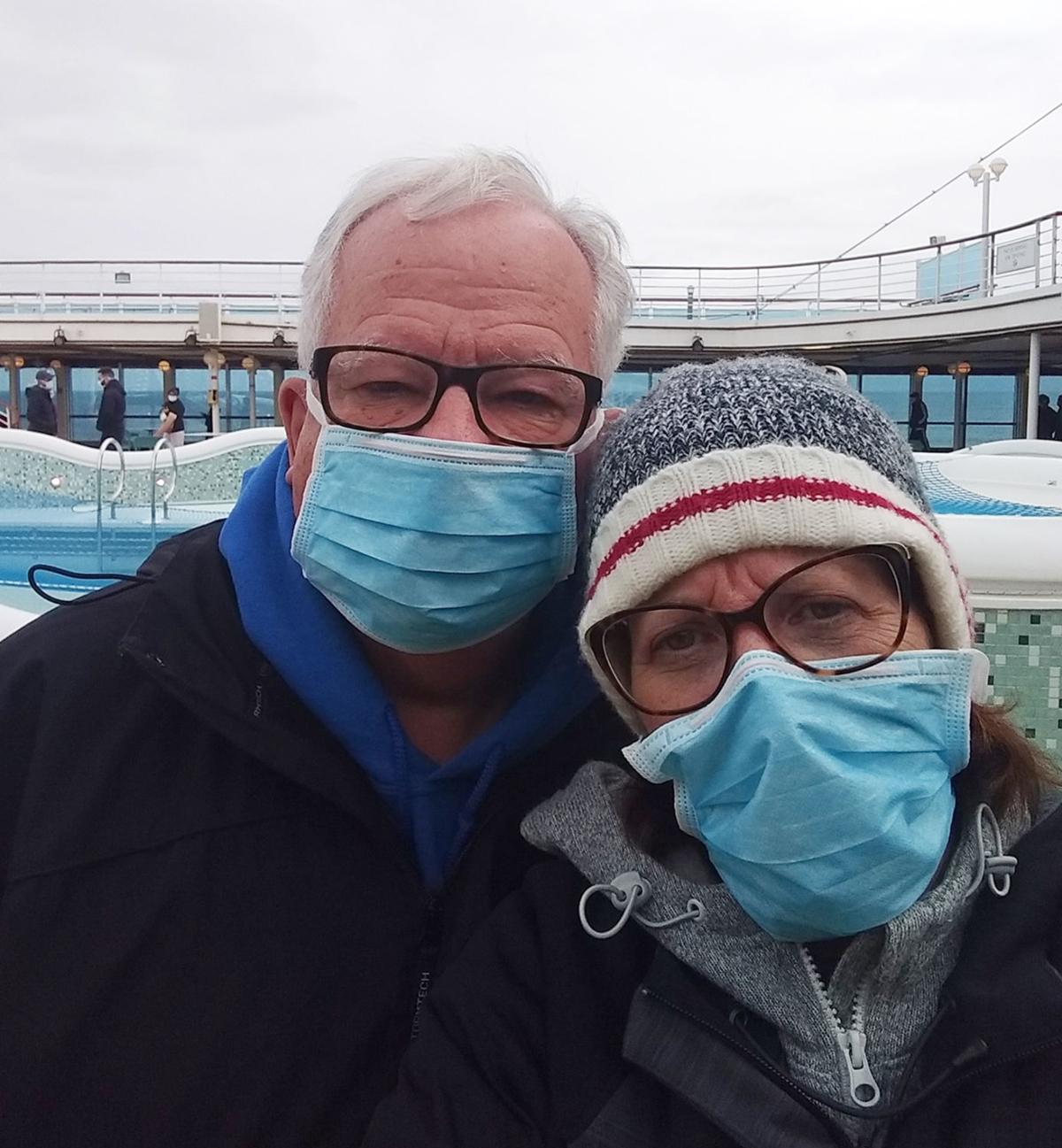 Ron Romanado and Karen Spoon-Goldman on deck of the Grand Princess cruise ship. 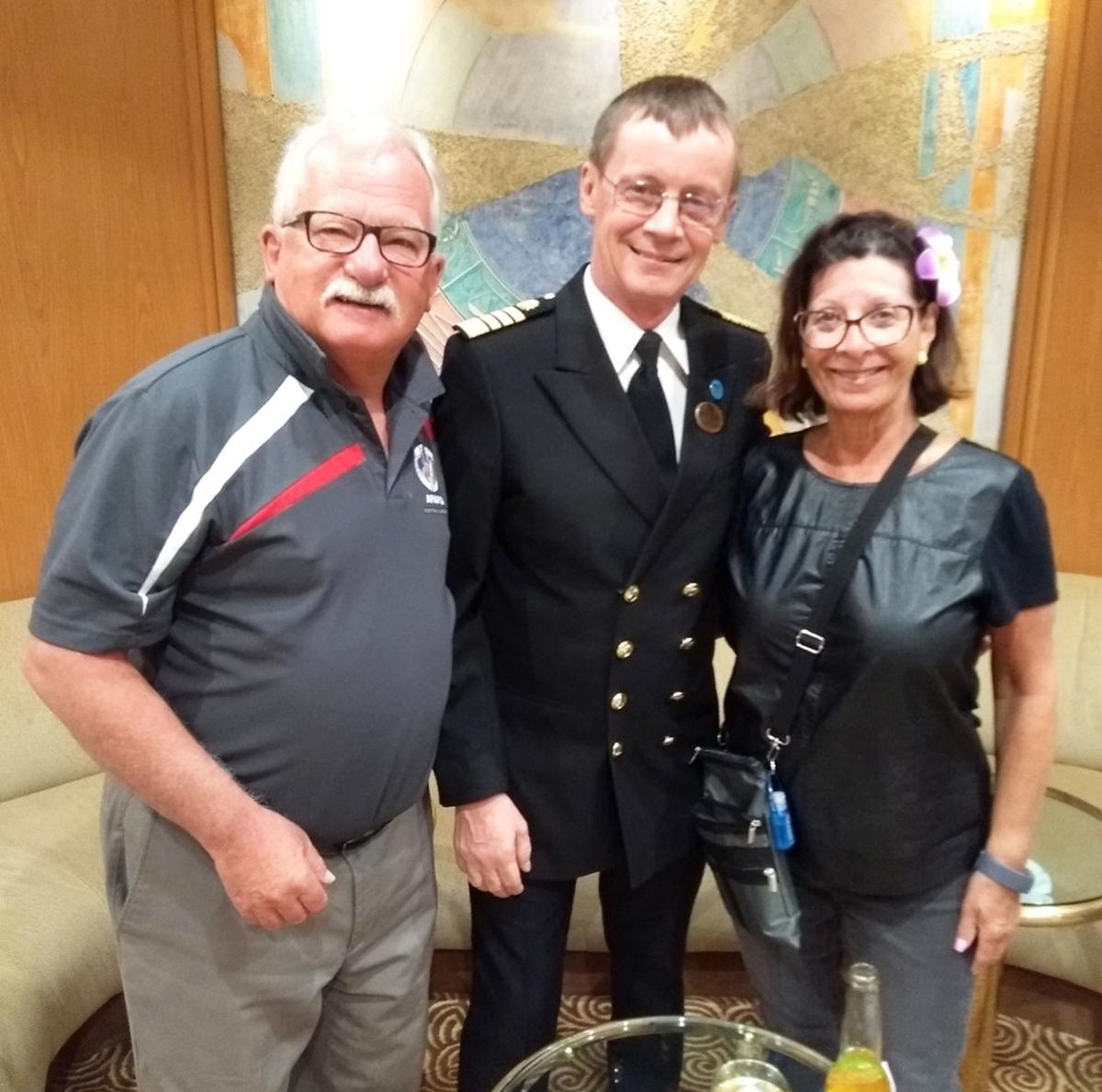 Ron Romanado and Karen Spoon-Goldman on deck of the Grand Princess cruise ship.

Ron Romanado and his partner Karen Spoon-Goldman of Pointe-Claire didn’t have attendants on their flight back to Canada from their cruise to the Hawaiian islands. In a windowless cargo plane turned airliner, U.S. State Department workers in full hazmat suits served the Canadian passengers bottled water and individually wrapped sandwiches.

After an extended stay on the Grand Princess cruise ship that had a COVID-19 outbreak, the masked passengers headed straight to the Canadian Forces base (CFB) Trenton, in Ontario for two weeks of quarantine. Only passengers on the ship who did not have symptoms of the virus were boarded onto the flight chartered by the Government of Canada.

Romanado, a 66-year-old semi-retired high school teacher and local sports referee, and Spoon-Goldman, a 62-year-old semi-retired daycare worker, embarked their trip on February 21 in San Francisco. Because of the COVID-19 outbreak, their 15-day cruise quickly turned into a month long nightmare.

Romanado, who was on his sixth cruise, said he was aware of the growing COVID-19 situation, but wasn’t concerned about contracting the virus on the trip because they are both in good health. He added that a few weeks before departure, Princess Cruises encouraged all passengers to bring an extra two weeks’ worth of medication as a precaution, in light of the previous Diamond Princess cruise outbreak.

“In other words, let’s not be stupid here,” said Romanado from Trenton, where he is still quarantined. “Given what’s happened, it might be wise for you to do that — and we did.”

For people who were short on their prescription medications, the cruise line arranged for them to be brought to the ship upon request. “Princess did what they could,” he added.

The first week and a half of the cruise went as planned. The couple travelled to four Hawaiian islands over a span of four days. The weather wasn’t great, but the trip at that point was enjoyable, given the friendships made on the ship. But Romanado said on March 4 things started to take a turn. The ship’s trajectory to Ensenada, Mexico changed once the connection was made between the previous cruise tour and a U.S. outbreak of COVID-19. It was found that some of the crew of the Grand Princess was the same from the previous tour, as were some of the passengers who had booked consecutive trips.

On March 5, all passengers went into quarantine and test kits were sent to the ship. From then on, passengers weren’t allowed out of their rooms. For a few days after that, the ship circled around the San Francisco Bay waiting for direction from the American government.

Princess increased the movie list upon quarantine to keep passengers occupied, and Romanado said the crew did everything to make their clients comfortable.

“The cruise line Princess was very good,” said Romanado. “They realised people would go stir crazy — especially people in our situation. We had no window. Don’t get me wrong here, it was a pain. But we had reasonable meals brought to us... We had a comfortable room, a TV to pass the time.”

Romanado described the plane ride to Canada as dark, because there were no windows, and noisy. Despite this, some passengers were in high spirits. “As we lifted off, people broke out and started singing O’Canada,” he recounted.

Currently at CFB Trenton, Romanado and Spoon-Goldman continue their quarantine on Canadian soil. The guests are discouraged to leave their rooms, although they are allowed to go for a walk — while wearing a mask — in a restricted area outside of the building. Food is brought to their rooms and Romanado now has a big window.

Those quarantined cannot have visitors and cannot have anything brought to them from outside the base. The quarantined Canadians have their temperatures checked by a nurse twice a day, who wears a mask and face shield to prevent contraction. “They would not even walk into our room. It’s almost like being in a bad horror movie,” said Romanado.

Without a television in their room, the couple gets the news from their cell phones. “It would be nice to see the TV — the outside world.” said Romanado, jokingly.

In light of the outbreak on the Grand Princess, the Princess Cruise Line announced they will be giving passengers a full refund, including cruise fare, air travel, hotel, additional transportation, and pre-paid excursions. The couple had other cruises planned for this year but the COVID-19 pandemic obviously put them on hold. But they will be back.

“We will cruise again, and we will cruise with Princess,” said Romanado. “If everything has calmed down, we’ll go again. We’re not afraid.”

As of Monday, March 16, two repatriated Canadians from the cruise ship tested positive for COVID-19 at CFB Trenton.