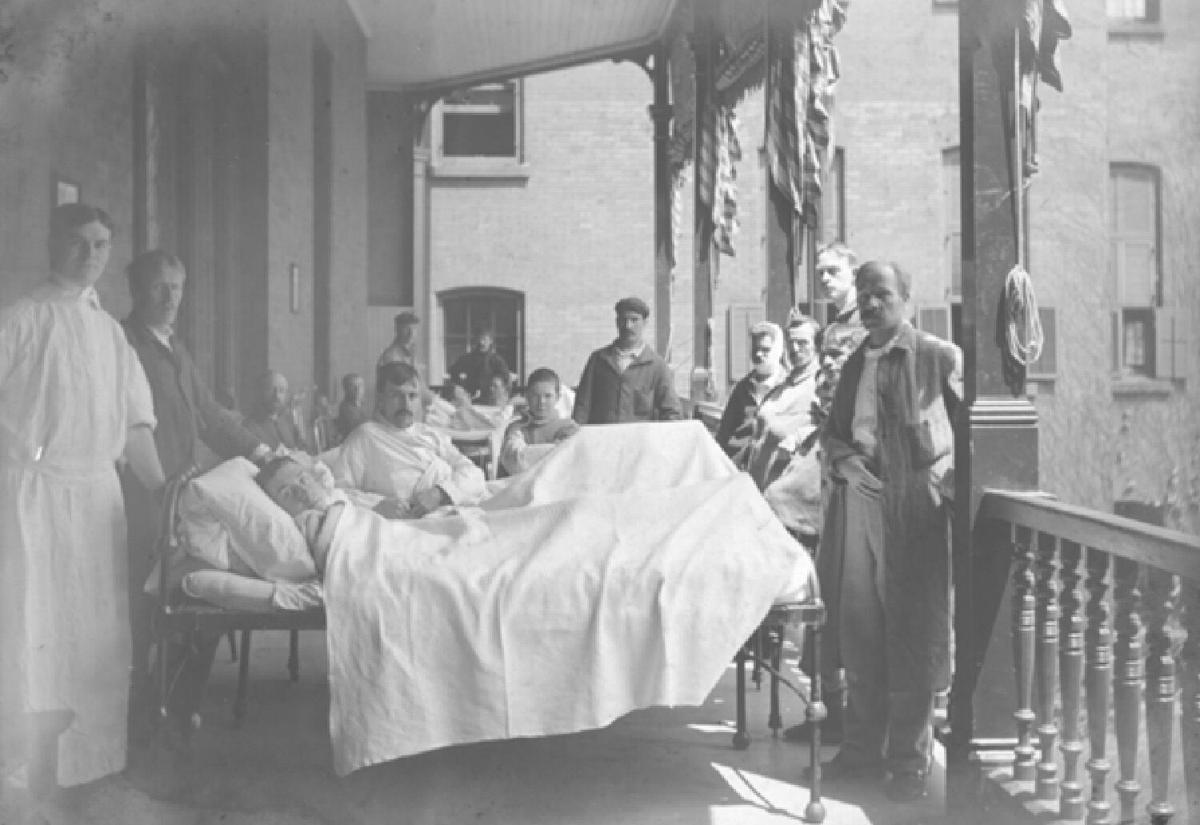 Patients, staff and visitors on the Ward M balcony, MGH, 1905. From the Art and Heritage Centre of the MUHC, Mann Fonds. 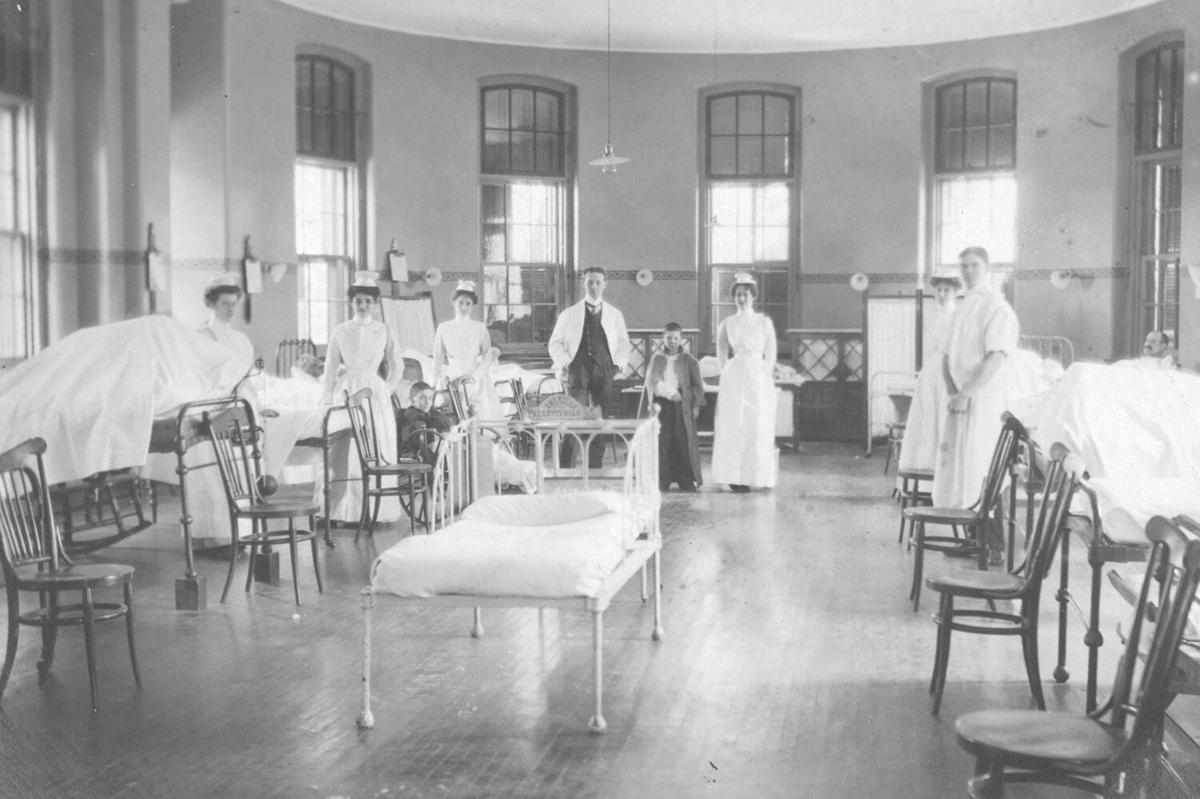 Patients, staff and visitors on the Ward M balcony, MGH, 1905. From the Art and Heritage Centre of the MUHC, Mann Fonds.

This year marks the 200th anniversary of the Montreal General Hospital (MGH), a pioneer institution of the McGill University Health Centre (MUHC) that has served the population through sweeping changes in the Quebec healthcare landscape.

This milestone also coincides with the bicentennial celebrations of McGill University. Both institutions are linked by an interesting historical fact: it is the Montreal General Hospital’s founding physicians who established the university’s first academic unit – Canada's first faculty of medicine – in 1829.

To mark this anniversary, several activities will be organized throughout the year, starting with a large-scale virtual exhibition  that launched on March 31. Created by the Art and Heritage Centre of the MUHC and the Montreal General Hospital Foundation, the virtual exhibit is a journey through 200 years of hospital history, medical innovation and exceptional individuals and teams.

“The Montreal General Hospital has no shortage of history makers in its first 200 years,” stated MUHC President and Executive Director Dr. Pierre Gfeller. “While Sir William Osler, credited with pioneering bedside teaching in Canada, is often named, consider that the hospital might not have existed as early as it did were it not for the Female Benevolent Society, which identified the need for the four-bed ‘House of Recovery’ to address poverty and illness in the city. Then there is Miss Nora Livingston, whose founding of the School of Nursing helped transform the profession, and Drs William Wright and Eleanor Percival, the hospital’s first Black and Female attending physicians. Their actions and those of many more have altered the course of our institution, health system and community. During this milestone year, let’s appreciate our past accomplishments and also reflect bravely on our shortfalls to envisage a future made brighter by embracing our differences as the strengths needed to make bold leaps forward.”

An extraordinary history to explore online

The exhibit shines a light on the profound link between the growth of Montreal and that of the MGH, tracking its evolution from a standalone hospital serving 20,000 people in 1821 to the 1997 merger with four other institutions that created the MUHC. The MGH served its population through several major disease outbreaks, from the deadly influenza of 1918 commonly known as the Spanish Flu to the COVID-19 pandemic. In recent decades, it has developed into one of only three Level 1 trauma centres in the province.

Featuring photographs, artwork, text and videos from local and national collections, the exhibition also follows the history of the hospital through the excitement and optimism of the biomedical revolution, highlighting breakthroughs such as Dr. Phil Gold and Dr. Samuel Freedman’s discovery of the Carcinoembryonic Antigen (CEA), the first biomarker for cancer; and Dr. Ronald Melzack’s contributions to pain theory, which paved the way for research and treatment protocols that address the complex social, psychological and physiological aspects of pain.

The MGH also contributed to the advancement of nursing by elevating standards of nursing education which led to the creation of nursing training in colleges and universities.

Originally conceived as a physical exhibit that was to cover the 6th floor of the MGH, the display had to quickly adapt to an online format due to COVID-19 restrictions. A second phase of the exhibit, profiling the key clinical activities that take place today at the MGH, will be added later this year.

As one of the first public healthcare institutions in the history of Montreal, the MGH always relied largely on funding from community sources to deliver state-of-the-art care, making donor generosity the cornerstone of its success to this day.

"The Montreal General Hospital Foundation is proud to support the creation of a virtual exhibit for the 200th anniversary of our Hospital,” stated Jean-Guy Gourdeau, President and CEO, Montreal General Hospital Foundation. “This new platform is an invitation to travel through time and to witness the historical events that have shaped an institution whose fate is so deeply linked to that of Montreal. Philanthropy has always been vital to the success of our hospital. Today, with this unique exhibit, we recognize two centuries of outstanding medical work accomplished by teams of dedicated individuals and supported by our generous donors."

Aside from the virtual exhibit, other exciting activities are on the bicentennial menu: First up, on April 21, is a special edition of McGill’s Holmes VP-Dean Distinction Lectures co-hosted by McGill’s Vice-Principal of Health Affairs and Dean of the Faculty of Medicine and Health Sciences, Dr. David Eidelman, the MGH Foundation’s President and CEO, Jean-Guy Gourdeau and the MUHC’s President and Executive Director, Dr. Pierre Gfeller. The lecture will be delivered by professor and former Harvard Medical School Dean, and neurologist at the MGH from 1970 to 1977, Dr. Joseph B. Martin. Also part of the celebrations are a book launch by celebrity hockey surgeon Dr. David Mulder; various public lectures, including a “Mini-Med” series on topics ranging from Mental Health and Aging to Trauma and Emergency Care; the MGH Auxiliary Award of Excellence; and employee recognition activities.

“McGill and the MGH share a truly inspiring history of leadership and excellence,” reflected Dr. Eidelman. “It is a great privilege, and also humbling, to be part of this community, one that began in my very early days as a student. While much time has since passed, our mission remains steadfast – to bring the best evidence-based healthcare to society, to our patients. I look forward to continuing our pursuit of excellence together into our third century. On behalf of McGill, congratulations to our long-time academic partner and friend, the MGH, to all of you, on this great milestone.”

The theme for the 200th is Reaching and Exceeding, inspired by the Robert Browning quote “A man’s reach should exceed his grasp.” The logo features an infinity symbol, which represents the endless pursuit of excellence of the healthcare workers and support staff of the Montreal General Hospital, who continue to reach beyond their grasp for the benefit of patients and their families.