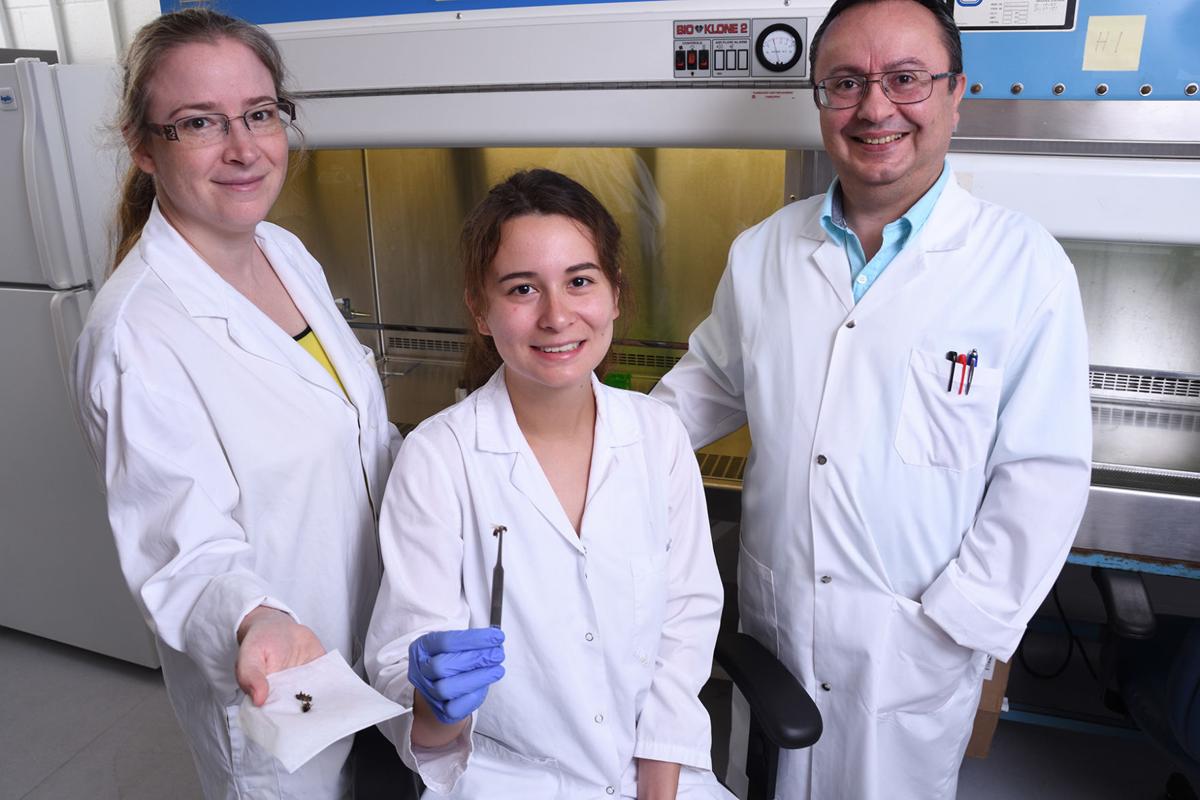 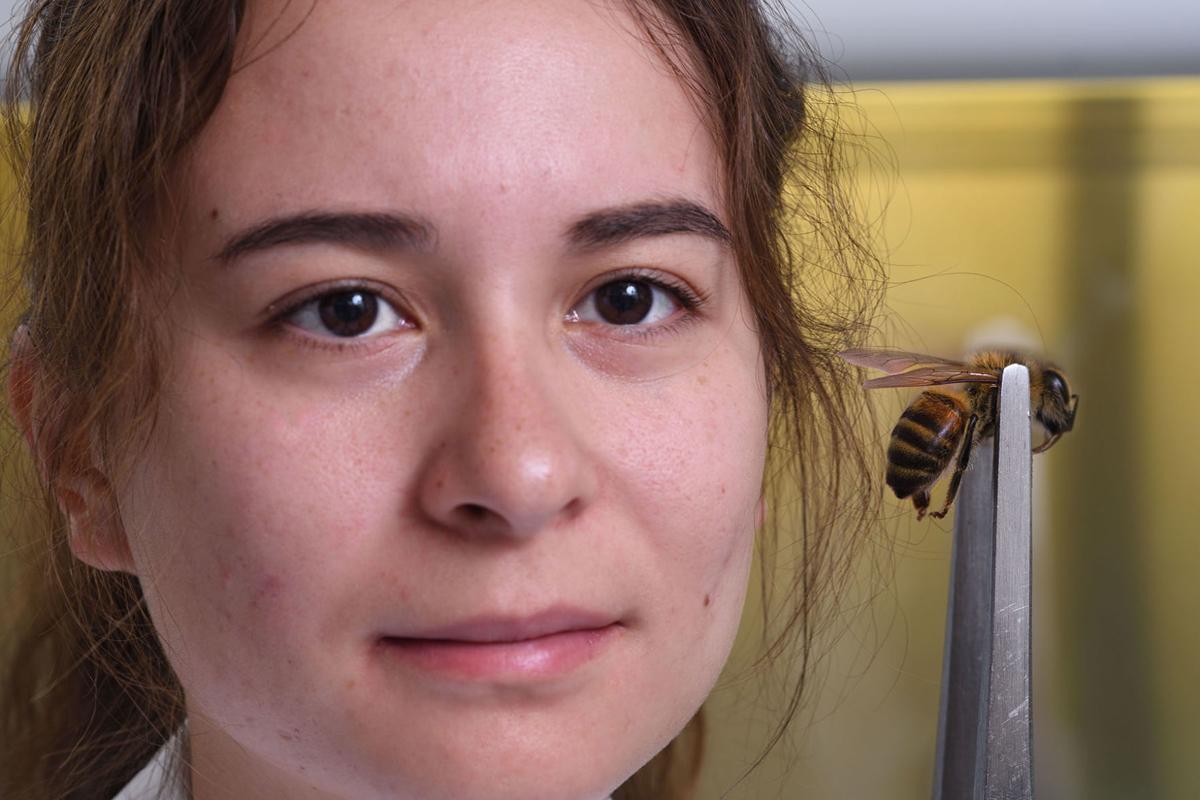 As Canada moves forward with its ambitious plan to become an innovation powerhouse, a national organization is already attracting top young talent from around the world this summer. One of those rising global stars is a biological engineering researcher from France who is spending three months in Montreal to identify potential problems causing decline in honeybee populations, a serious ecological and economic problem being observed around the world.

Marie Marbaix, a 22-year-old Master’s student at the University of Aix-Marseille, is one of more than 1,200 international students helping to solve tough innovation challenges at 55 Canadian universities through a unique summer internship program called Mitacs Globalink. She is working under the guidance of Université de Montréal Veterinary Medicine professor Levon Abrahamyan, in collaboration with Professor Marie-Odile Benoit-Biancamano, on a project that is studying the negative factors that affect the lifespan and performance of honeybees, specifically bees that are co-infected with viruses and the Varroa destructor mite, a common honeybee parasite. Media are invited to see a demonstration of this work first-hand.

The research is important because Canadian bee producers are among those experiencing hive loss, particularly after wintering their bees. One theory is that honeybee colonies infected with the parasite mite are more prone to infections by deadly viruses, which are possibly being transmitted by the varroa themselves. “There are several stress factors that can cause mortality of the honeybee populations worldwide, however, viruses are probably one of the most important — yet least investigated — factors of this phenomenon,” Abrahamyan said.

“We think that bees which are heavily infected with the Varroa destructor mite are likely to be carrying more viruses, and therefore, are less likely to survive,” explained Benoit-Biancamano, adding that the goal is to develop tests that can be used as predictors of hive health, enabling bee producers to intervene when virus infections are present.

During her time in Canada, Marbaix will be extracting RNA and DNA from honeybees infected with the Varroa destructor mite and running analyses to identify the viruses infecting the bees. Whereas traditional testing methods look for the presence of few already known viruses, Marbaix is using a leading-edge high-throughput sequencing (HTS) methodology to identify all viruses, including the unknown viruses.

“The idea is that once we can identify the viruses affecting bee populations, we’ll be better able to come up with strategies to control those viruses and keep hives healthy,” Abrahamyan said.

For example, researchers already know that the varroa mite feeds on fat so there may be a correlation between glucose levels in honeybees and their overall health. Work is therefore under way to develop a glucose test for bees, similar to the way people use glucometers to control diabetes. If glucose levels are ultimately shown to be predictive of hive health, a test could be commercially available as early as next year, according to Benoit-Biancamano.

For Marbaix, the Mitacs Globalink experience is an opportunity to develop new theoretical and practical skills while discovering a new country and a culture at the same time. “Participating in this program is allowing me to learn more about virology and to gain hands-on learning in a state-of-the-art research laboratory, performing original experiments,” said Marbaix, who said she may consider returning to Canada to work on her thesis. “I don’t yet know exactly what I would like to do as a profession, but this internship is offering me a new alternative,” she said.

Their leading-edge research includes: the development of new alternatives to antibiotics that will work against antibiotic-resistant bacteria like listeria and clostridium to prevent food-borne illnesses and agricultural animal loss; work to develop a one-of-a-kind ‘brain’ that is capable of managing, controlling and optimizing resources on a rooftop farm; work to advance the use of collaborative robots that operate alongside highly skilled workers in small, high precision manufacturing facilities; the development of new, more effective and safer drugs that target Type 2 diabetes (hyperglycemia); work to better understand how people with autism interact with others; and, the development of a new functional food ingredient that combines blueberry puree and plant-based protein to formulate high-fibre, high-protein drinks.

Since 2009, Mitacs has matched 5,000 senior undergraduates with Canadian faculty through its Globalink research internships initiative. To further strengthen international research collaborations, Mitacs Globalink now offers two-way mobility opportunities between Canada and international partner countries for both undergraduate and graduate students. The program promotes Canada as a top destination for research opportunities and showcases Canadian research expertise around the world.

“The Canadian government continues to invest in improving Canada’s innovation performance and grooming new research talent, and Mitacs is proud to play a key role in these efforts,” said Eric Bosco, chief business development officer of Mitacs, noting statistics show that more than half a million international students studied in Canada last year, with 60 per cent planning to apply for permanent residence. “By providing students with quality research experience, programs like Mitacs Globalink are proving to effectively promote innovation across all industry sectors,” he said.

Mitacs is a not-for-profit organization that fosters growth and innovation in Canada by solving business challenges with research solutions from the best academic institutions at home and around the world. Mitacs is funded by the Government of Canada, the Government of Quebec, other provincial governments, as well as university and industry partners.