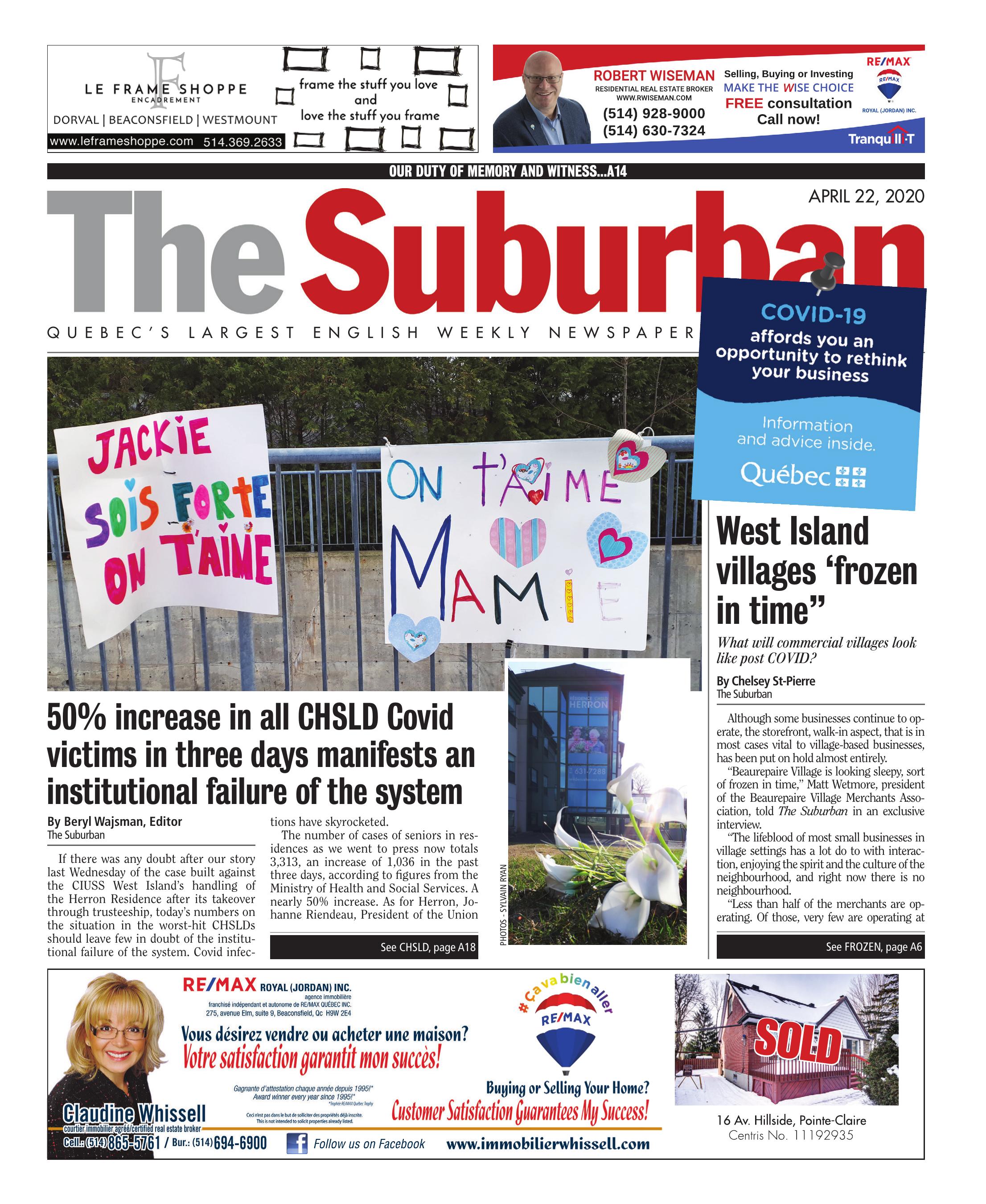 City_news
featured
50% increase in all CHSLD Covid victims in three days manifests an institutional failure of the system
By Beryl Wajsman, Editor The Suburban

If there was any doubt after our story last Wednesday of the case built against the CIUSS West Island’s handling of the Herron Residence after its takeover through trusteeship, today’s numbers on the situation in the worst-hit CHSLDs should leave few in doubt of the institutional failure of the system. Covid infections have skyrocketed.

The number of cases of seniors in residences as we went to press now totals 3,313, an increase of 1,036 in the past three days, according to figures from the Ministry of Health and Social Services. A nearly 50% increase. As for Herron, Johanne Riendeau, President of the Union of Healthcare Professionals of the West Island told the Journal de Montréal today that “almost everyone at Herron is infected with Covid.” Sources said that there are 50 new cases of Covid at Herron which would bring the number to 114 infected residents out of 130. An 87% infection rate. Officially the Ministry still lists the number infected at 61 because the CIUSS West Island claims it is still awaiting laboratory results.

In Laval the situation continues to deteriorate at the CHLSD Sainte-Dorothée. It has reported 19 new cases bringing the total to 72% of the residents. The CHSLD Laurendeau in Montreal saw a rise in infections in the past two days move from 29 to 145 according to Ministry numbers.

In another tragic statistic, ths CIUSSS du Nord-de-l’Île-de-Montréal confirmed another 24 deaths. Montreal North may also be seeing a shortage of PPEs this weekend.

In other Ministry reports, Le Centre de soins prolongés Grace Dart Extended Care Centre that had only one case on April 7 now has 62.

Lasalle has become a major hot zone with the Centre d’hébergement de LaSalle going from 47 cases to 99 in just a few days with 30 deaths. The long term care unit at Lasalle Hospital went from 28 cases to 66 in that same period with 25 deaths. And The Floralies in Lasalle went from 10 to 84 cases with 18 deaths.

The CHSLD Yvon Brunet in Montreal now has 99 cases. The CHSLD Joseph-François Perreault in Saint-Michel has 98. And the Institut universitaire de gériatrie de Montréal, Montreal has 85. Lachine’s Nazaire-Picheé Centre now counts 20 deaths at the residence.

Although some businesses continue to operate, the storefront, walk-in aspect, that is in most cases vital to village-based businesses, has been put on hold almost entirely.

“The lifeblood of most small businesses in village settings has a lot do to with interaction, enjoying the spirit and the culture of the neighbourhood, and right now there is no neighbourhood.

“Less than half of the merchants are operating. Of those, very few are operating at full capacity and the process of adaptation is different for every business. “The advantage that a neighbourhood store has over a faceless giant, is our ‘one on one’ personal interaction with clients, which is currently not an option on the physical level.

“Some of the challenges for the village is adapting its ways of business and marketing strategy, all the while trying to work within programs and regulations that are changing every week.

“The million-dollar question for us is what the village will look like after COVID.”

Members of the communities surrounding West Island villages often refer to the villages as the heart of the community and the livelihood of their local shops is important to many of them. “I believe in the goodwill of our community and my prediction is that a community- generated emphasis on shopping local will come out of this. Many of my own clients from ‘Le Frame Shoppe’ have called me personally just to see if there is anything they can do to help out.

“The BVMA is actively using the opportunity of this slowed period to re-tool our mandate to best serve our merchants. We are holding regular virtual meetings and are working diligently on preparing for the future.”

Magda Bishay, president of the Pointe-Claire Village Commercial Association, told The Suburban that “we offer a shopping experience, similar to Beaurepaire Village, for example, that cannot be found in large malls. “It is not easy running a small business in a village setting, our merchants are already tough entrepreneurs, equipped with the innate character that give them the ability to face difficult circumstances.”

Villages tend to be early spring through winter holiday destinations with April being the start of the season after the three-month dry period. When April rolled around this year and the majority of village-based businesses were affected by the government measures to stop the spread of COVID-19, this posed an additional challenge unprecedented to merchants.

“April means springtime, the warm weather brings people out,” Bishay explained. “We are not a mall where people go from one store to another without being exposed to the elements. The beginning of January to the end of March is already a quiet period, which we know to expect, but this was definitely unexpected.”

Many community-oriented businesses closed shortly before government measures that forced closures of non-essential business took place by their own initiative to keep their employees as well as their customers safe. Those that took the initiative at that stage, did so at their own risk, as there was no promise at that point of government funding to keep them afloat. “Our community supports us and it is just as important for us to support them,” Bishay said.

“Our association is staying connected to our merchants and providing them with updates to summarize government subsidies, loan options and more,” Bishay told The Suburban. “What we would like to see is more support from the government in consideration of the small business owner/operator model.”