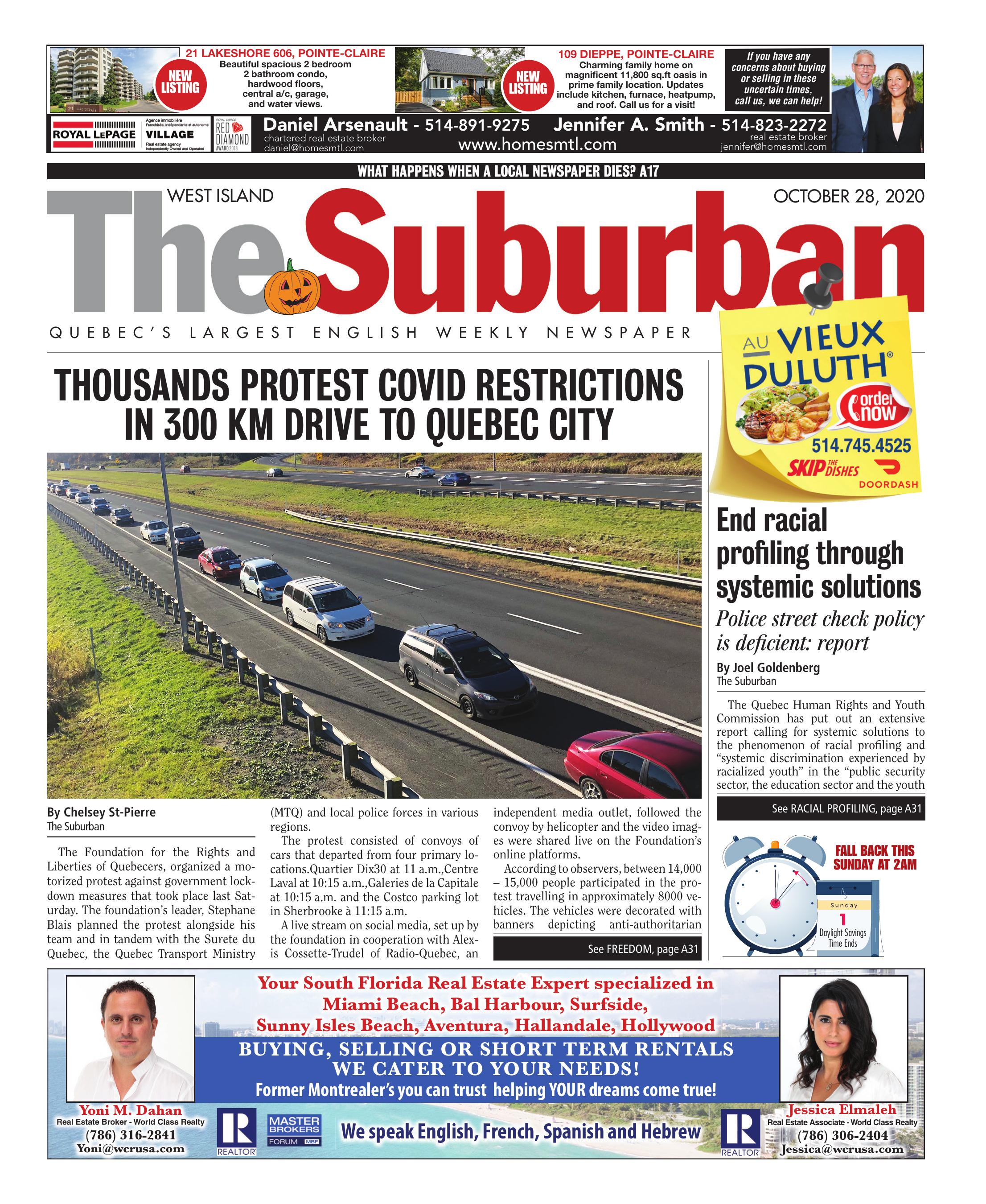 The Foundation for the Rights and Liberties of Quebecers, organized a motorized protest against government lockdown measures that took place last Saturday. The foundation’s leader, Stephane Blais planned the protest alongside his team and in tandem with the Surete du Quebec, the Quebec Transport Ministry (MTQ) and local police forces in various regions.

The protest consisted of convoys of cars that departed from four primary locations.Quartier Dix30 at 11 a.m.,Centre Laval at 10:15 a.m.,Galeries de la Capitale at 10:15 a.m. and the Costco parking lot in Sherbrooke à 11:15 a.m.

A live stream on social media, set up by the foundation in cooperation with Alexis Cossette-Trudel of Radio-Quebec, an independent media outlet, followed the convoy by helicopter and the video images were shared live on the Foundation’s online platforms.

According to observers, between 14,000 – 15,000 people participated in the protest travelling in approximately 8000 vehicles. The vehicles were decorated with banners depicting anti-authoritarian slogans, messages of love, freedom and anti-censorship. Thousands of drivers passing the convoy in the left lane, which protesters were asked to keep clear, waved and honked as a show of support. Hundreds of supporters gathered on foot alongside the route and on bridges overlooking the convoy. Many prepared signs and yelled out words of encouragement. Drivers honked at onlookers when passing them and many shouted “freedom” to each other.

Laval police escorted the convoy onto the highway and exited right before the convoy crossed the Laval border. Surete du Quebec police then took over guiding the convoy in an organized fashion with tactical checkpoints to control direction and police vehicles followed the convoy. Many protesters waved and thanked police while driving past them.

Upon arrival at Levis, there was a welcome by Blais who personally thanked protesters passing over the bridge where he stood with a crowd of approximately twenty other people waving at the drivers as they passed by them.

The Foundation has raised over half a million dollars to date for the purpose of suing federal and provincial governments for alleged damages caused by lockdown measures. Toronto lawyer, Rocco Galati has taken the lead in the legal challenges by way of injunctions, claiming that the government restrictions are in violation of the Canadian constitution and Blais intends to take a similar approach with a legal team here in Quebec.

A Driving While Black protest of luxury cars was held this past July.

The Quebec Human Rights and Youth Commission has put out an extensive report calling for systemic solutions to the phenomenon of racial profiling and “systemic discrimination experienced by racialized youth” in the “public security sector, the education sector and the youth protection system.”

“The killing of George Floyd this spring, combined with recent police-related deaths of racialized and Aboriginal peoples in Quebec and elsewhere in Canada, have led to wide-scale mobilization against systemic racism and police brutality,” says a report summary. “The current climate is characterized by a clear and widely expressed desire to put an end to these issues. The report must be construed within the context of the ongoing COVID-19 pandemic, which is disproportionately impacting racialized people, and Black communities in particular.”

A statement issued by the commission says most of its 2011 recommendations against racial profiling and systemic discrimination have not been or only partially implemented.

“A review of these recommendations has the commission call on once again the Quebec government to adopt a policy aimed at fighting systemic racism and systemic discrimination that provides a plan of action for preventing and eliminating racial profiling,” says a QHRC statement.

The report is especially critical of random police street checks in Montreal and Quebec as a whole, which affect Black and aboriginal groups far more than the white population.

The report points out that the SPVM and the Public Security ministry announced reforms regarding street checks this past summer.

“It appears they have disregarded the Commission’s recommendation to review police policies and practices in this area: policies to curb inappropriate behaviour continue to be linked to targeted scrutiny of racialized minorities. The Commission also notes that, contrary to our recommendation, neither document requires the police to inform people of their rights when they stop them. The documents also fail to provide any specific penalties for failure to comply.”

Snowdon councillor Marvin Rotrand, whose motion calling on the Montreal police to halt routine random police checks and on the Quebec government to pass a law prohibiting such checks passed at Montreal council, this summer criticized the new street check policy. He said it will “now have to state the reason of their stop and recognize that people don’t have to ID themselves if they are not being detained; and they will have to fill out a form to say what the motive of stopping was and what the person’s ethnicity is.

“It is far less than what we asked for or what exists elsewhere, and is no guarantee that the problems we witnessed won’t continue,” he added at the time.

Also at that time, Fo Niemi, of the Centre for Research-Action on Race Relations (CRARR), called the new policy a “piece of Swiss cheese with a lot of holes in it.”

Montreal Opposition leader Lionel Perez said this summer that the new policy doesn’t deal with the issue of Driving While Black, the subject of a July 5 luxury vehicle convoy protest.

Other issues brought up in the report:

• Black youth being over-represented in Director of Youth Protection reporting and evaluation.”

• “In the education sector, the initiatives taken to end stereotypes about the behaviour of racialized students and to eliminate the disproportionate use of discipline against these students have been insufficient.”

The commission recommends that victims’ testimony be give close attention.

“Meaningful participation by those most affected by an issue is key to any process to end their exclusion and stigma,” says the commission statement. “Racialized people must be involved and listened to at all stages, including the development, implementation and evaluation of this action.”