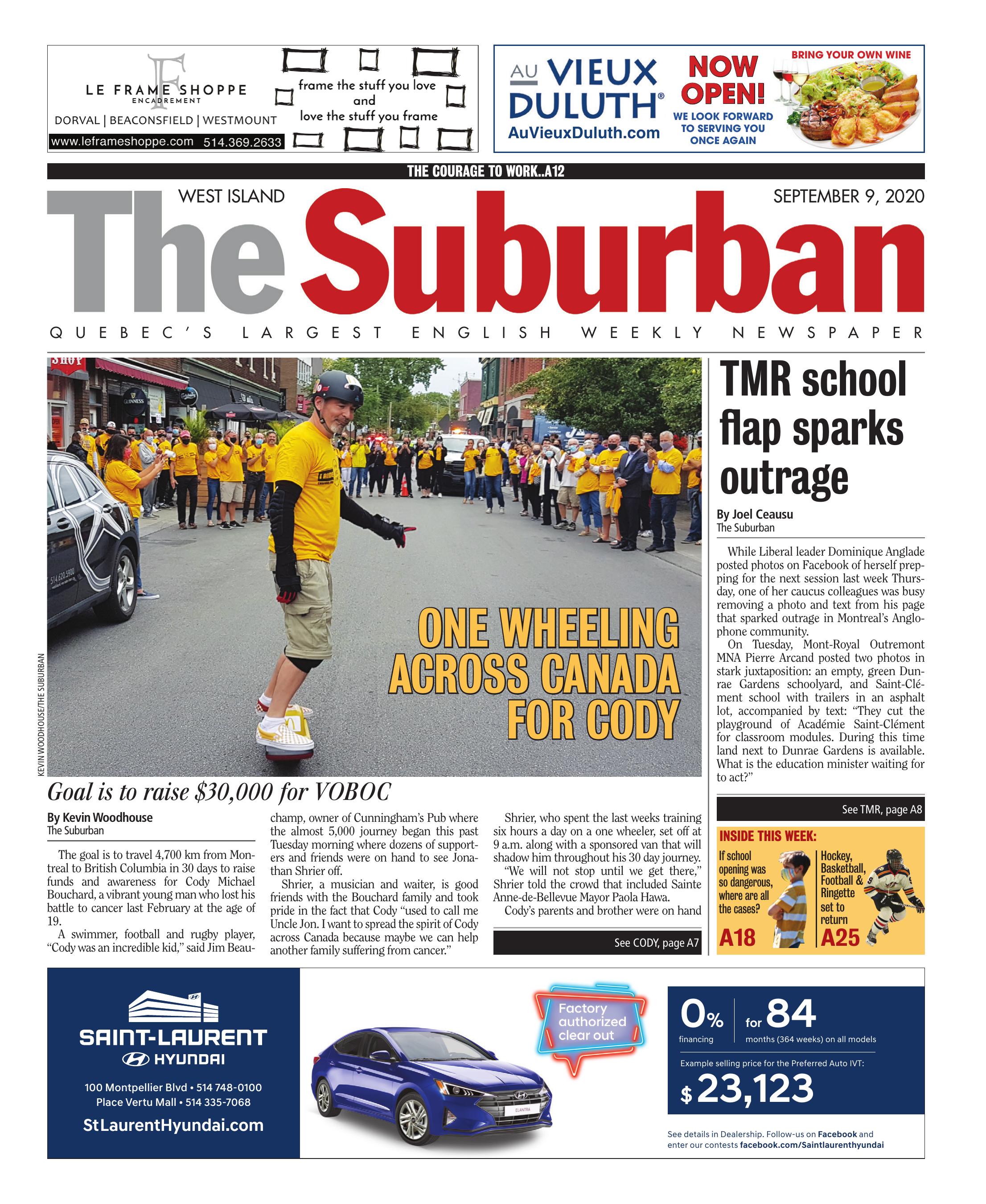 Jon Shrier, who spent the last weeks training six hours a day on a one wheeler, set off at 9 a.m. along with s sponsored van that will shadow him throughout his 30 day journey on the I Ride For Cody fundraiser.

The goal is to travel 4,700 km from Montreal to British Columbia in 30 days to raise funds and awareness for Cody Michael Bouchard, a vibrant young man who lost his battle to cancer last February at the age of 19.

A swimmer, football and rugby player, “Cody was an incredible kid,” said Jim Beauchamp, owner of Cunningham’s Pub where the almost 5,000 journey began this past Tuesday morning where dozens of supporters and friends were on hand to see Jonathan Shrier off.

Shrier, a musician and waiter, is good friends with the Bouchard family and took pride in the fact that Cody “used to call me Uncle Jon. I want to spread the spirit of Cody across Canada because maybe we can help another family suffering from cancer.”

Shrier, who spent the last weeks training six hours a day on a one wheeler, set off at 9 a.m. along with a sponsored van that will shadow him throughout his 30 day journey.

“We will not stop until we get there,” Shrier told the crowd that included Sainte Anne-de-Bellevue Mayor Paola Hawa.

Cody’s parents and brother were on hand for the launch and father Dave was “overwhelmed by the support. Jon told us on July 19th that he wanted to do something in Cody’s memory and when he told us he wanted to one wheel across the country, we thought ‘that was crazy but we do crazy well’.

“Cody always brought communities together and we still see that everyday.”

David noted that when Cody was diagnosed with cancer, “he wrote a letter stating how he was ‘going to kick cancer’s ass.’ He also said that he wanted us to start a fund to help other kids stricken with cancer.”

The goal is to reach $30,000 for the Cody Michael Bouchard Fund who will be donating all of the collected donations for VOBOC (Venturing Out Beyond Our Cancer) Foundation of Quebec. VOBOC’s mandate is to help children and their families dealing with cancer.

To watch the ride progress, go online via cmbfund.org

While Liberal leader Dominique Anglade posted photos on Facebook of herself prepping for the next session last week Thursday, one of her caucus colleagues was busy removing a photo and text from his page that sparked outrage in Montreal’s Anglophone community.

On Tuesday, Mont-Royal Outremont MNA Pierre Arcand posted two photos in stark juxtaposition: an empty, green Dunrae Gardens schoolyard, and Saint-Clément school with trailers in an asphalt lot, accompanied by text: “They cut the playground of Académie Saint-Clément for classroom modules. During this time land next to Dunrae Gardens is available. What is the education minister waiting for to act?”

The reaction was swift and intense, garnering outrage from hundreds of Montrealers over the suggestive language and imagery, but not from the English Montreal School Board – under trusteeship and engaged in a legal battle with the provincial government over Bill 40 – which did not respond to a request for comment.

On Thursday morning Arcand removed the DG photo, and then the reference to it. He told The Suburban his intent was not to divide. “We’ve been hearing from the Marguerite-Bourgeoys school board for about a year that they need a new school in TMR and were looking at a piece of land near Dunrae Gardens. I’ve been told the problem is Marguerite Bourgeoys is now a Centre de services scolaire, and the English Montreal School Board is under trusteeship, so we don’t know exactly who is in charge of what.”

“I put a picture of land near Dunrae Gardens and apparently some parents got very nervous thinking I was promoting the use of this piece of land,” he said in an interview from Quebec City, adding, “I’m not part of the government and it’s not up to me to make a decision.”

Critics noted Arcand had a full day to clarify in response to harsh and repeated criticism but did not and chose only to respond to supportive messages until the matter got widespread attention.

EMSB Parent Commissioner Pietro Mercuri was outraged, calling for Arcand to resign. “Mr. Arcand is a seasoned politician and he has support staff and advisors. I’m sure he knew what he was doing by responding to those who praised him… I think (he) saw this as an opportunity to win over the parents of children who attend overcrowded French schools in his riding.”

A Dunrae staffer told The Suburban “It’s not ‘available land’, it’s our children’s schoolyard.” A Saint-Clément parent mused: “It’s undignified, more frustrated Liberals who filled French schools with immigrants while starving English ones, and now we have a problem and they provoke to be relevant.”

Mercuri wasn’t buying Arcand’s explanation and said no one should point fingers. “Several iterations of the Quebec government of every political stripe have known for decades that many French schools in Montreal would become overcrowded.”

TMR Mayor Phillipe Roy thanked Arcand for the original post and was immediately pilloried for encouraging the carving up of English schools. TMR councillor Joseph Daoura also chimed in support for Arcand’s missive.

Asked for clarification of TMR council’s position on the integrity of English school properties, Roy told The Suburban it was a mistake. “It was a big error. I just liked a post saying we need another French school in TMR. The Quebec government already announced it would build one but is taking a lot of time. We were trying to put pressure on Quebec. But in no way to take away from English schools” he said, adding he was “first to come out and fight to save Carlyle School when the EMSB tried to close it.”

Arcand said he spoke with Dunrae officials and told them “if a decision is made by the CAQ and parents are not happy, my job as MNA is to defend them and help overcome whatever decision is made.”

Asked point blank if he would oppose attempts by the MB service centre or the government to take an EMSB piece of land for a new French school, Arcand said “Of course. The minister has the privilege to do that, but I will oppose taking land at the expense of another school, especially an English school.”