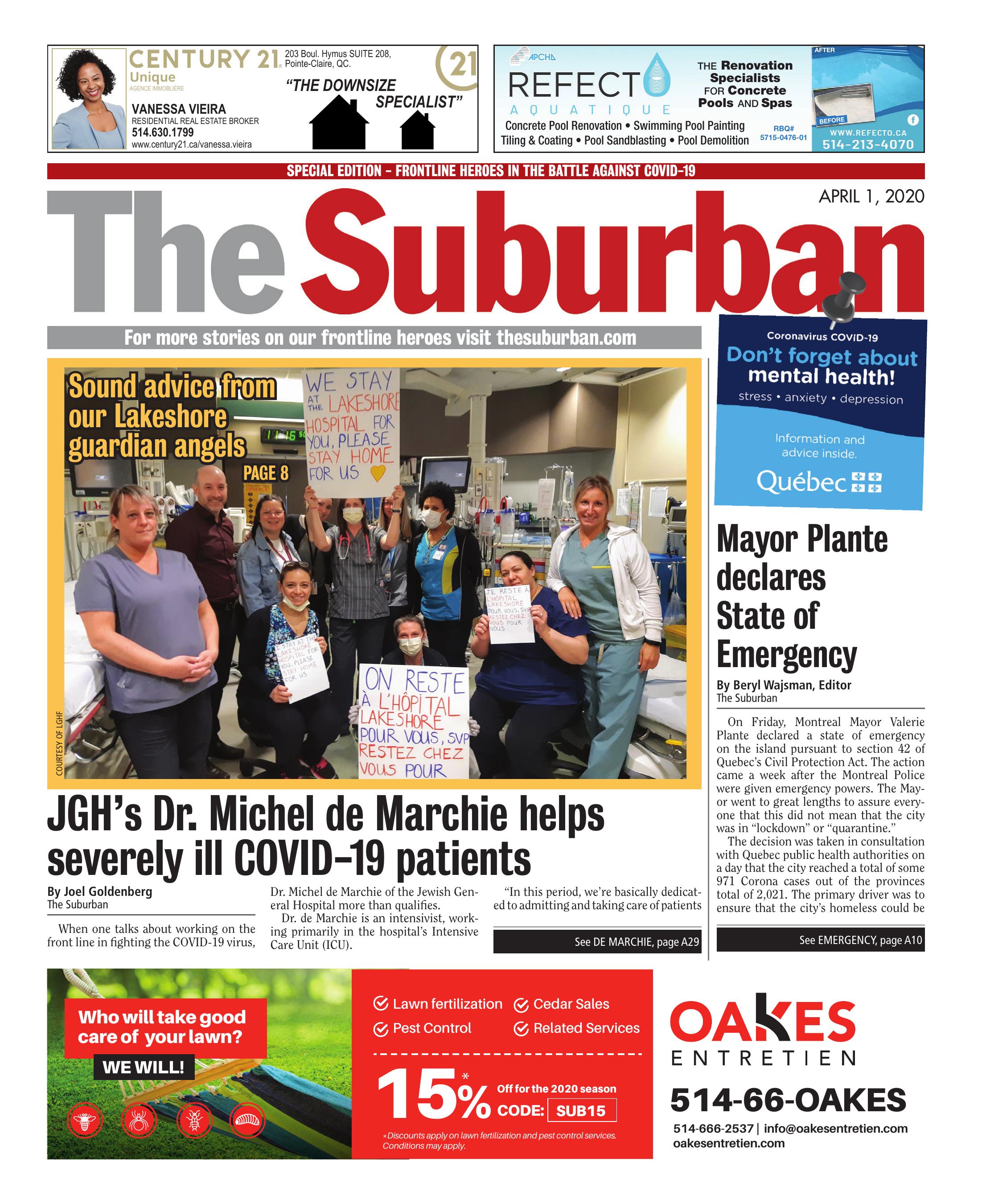 When one talks about working on the front line in fighting the COVID-19 virus, Dr. Michel de Marchie of the Jewish General Hospital more than qualifies.

“In this period, we’re basically dedicated to admitting and taking care of patients who are severely ill from COVID-19,” he pointed out. “It’s extremely busy at the hospital right now. You have to understand that every COVID-19 patient that is admitted is admitted because they’re critically ill, and they usually require, though not necessarily all the time, a high concentration of oxygen or putting in a tube to control their breathing.

“When they are isolated in negative pressure rooms, precautions regarding dressing and undressing are taking place. There are usually two or three nurses looking after one patient, because it’s very demanding for the personnel, but we’re handling the situation extremely well.”

Regarding his own precautions, Dr. de Marchie said he normally dresses in civilian clothing, “but this time I have scrubs, I wear a mask all the time, my IPhone is in a zip-lock bag, I clean my phone several times a day, I clean my hands every five minutes and even more so sometimes, and when I go into a room, I’m appropriately dressed. I also bought special glasses to protect myself.”

We pointed out that, unfortunately, numerous health workers in highly stricken Italy have contracted the virus.

“That government, as was the case in many countries, was not pro-active, compared to the Quebec government, and even where governments were pro-active, there were a lot of slips,” he explained. “What they are emphasizing to the population is keeping distances and quarantining, because that’s what you need to do, because otherwise, the system breaks down and we don’t want to be in the same situation as Italy. We are not. We also have more ICUs for a population of eight million in Quebec than they had in Italy [for their population].”

As for the general population, Dr. de Marchie, from his front line point of view, says they absolutely must follow the government’s COVID-19 prevention guidelines.

“Follow, to the tee, the directives established by the municipal authorities, but also by the government — this is not a joke,” he emphasized. “You have to take this literally, and quarantine is extremely important to stop the propagation of the virus. Your readers have to understand that COVID-19 is an extremely transmittable virus. The quarantine will allow us to flatten the curve, as people at the ministry level are saying.”

A picture is worth a thousand words could not be more pertinent in this photo of doctors, nurses and support staff at the Lakeshore General Hospital (aka Guardian Angels) who are going to work every day at great personal risk in order to keep us all safe.

Their collective message is, “We stay at the hospital for you, please stay home for us.”

The Suburban and all West Islanders salute you for your dedication to others.

On Friday, Montreal Mayor Valerie Plante declared a state of emergency on the island pursuant to section 42 of Quebec’s Civil Protection Act. The action came a week after the Montreal Police were given emergency powers. The Mayor went to great lengths to assure everyone that this did not mean that the city was in “lockdown” or “quarantine.”

The decision was taken in consultation with Quebec public health authorities on a day that the city reached a total of some 971 Corona cases out of the provinces total of 2,021. The primary driver was to ensure that the city’s homeless could be directed to the main shelter at the old Royal Victoria Hospital. Homeless persons are not only suffering from the virus and need assistance but may be passing it on to others at a higher rate.

“The most vulnerable in our society need us,” Plante said. “Several day centres have had to close and the number of places in shelters has been reduced, leaving hundreds of homeless people without food, no place to rest, no protection.”

In response to questions, Public Health director Dr. Mylène Drouin said that sealing Montreal off by closing the bridges was nowhere on the radar, but admitted that the city would work step by step with Quebec public health and that the next steps would be determined. Bridge closures were in the powers of the city now she did admit.

On Sunday, Mayor Plante held another press conference with Police Chief Sylvain Caron at her side, and announced increased police powers. Her declaration of a State of Emergency on Friday gave police broader powers which she proceeded to outline. The police will force homeless people to go into shelters set up at the Royal Victoria Hospital or day shelters now being set up at three sites in the city. They will have the power to force anyone with symptoms, among the homeless, to be tested. Further, the police will have the power to physically take anyone who has tested positive and is seen in public back to their homes or medical facilities as Quebec City did in one case last week.

Further, the police will exercise their powers to break up people walking on the street as a group and who are less than 2m apart. They will break up gatherings of more than two people,in parks. They will go into non-essential businesses that are open and ask them to close. If they refuse they will be fined. If they see repeat individuals not following social distancing guidelines they may issue them fines as well.

Perhaps the most controversial point of the press conference came when Chief Caron confirmed that his officers have been instructed to act on tips that people are gathered in numbers in a private home. Though he said police have been told to use “their common sense” such as asking how a caller knows or whether the people they are calling about have been making noise, he did say the police are ready to go into private homes and break up gatherings — religious or social — and that they now have the authority to do so.