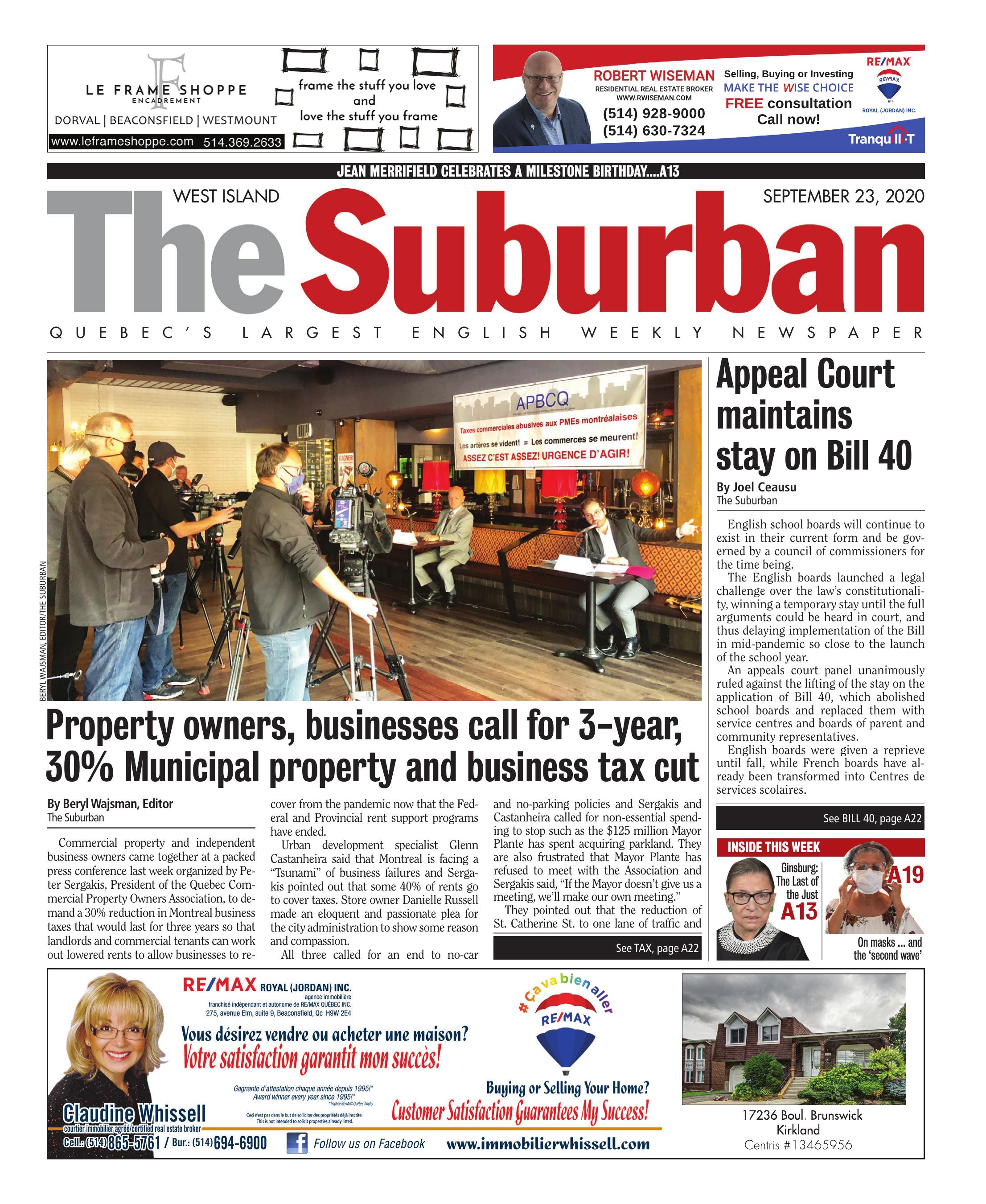 Commercial property and independent business owners came together at a packed press conference last week organized by Peter Sergakis, President of the Quebec Commercial Property Owners Association, to demand a 30% reduction in Montreal business taxes that would last for three years so that landlords and commercial tenants can work out lowered rents to allow businesses to recover from the pandemic now that the Federal and Provincial rent support programs have ended.

Urban development specialist Glenn Castanheira said that Montreal is facing a “Tsunami” of business failures and Sergakis pointed out that some 40% of rents go to cover taxes. Store owner Danielle Russell made an eloquent and passionate plea for the city administration to show some reason and compassion.

All three called for an end to no-car and no-parking policies and Sergakis and Castanheira called for non-essential spending to stop such as the $125 million Mayor Plante has spent acquiring parkland. They are also frustrated that Mayor Plante has refused to meet with the Association and Sergakis said, “If the Mayor doesn’t give us a meeting, we’ll make our own meeting.”

They pointed out that the reduction of St. Catherine St. to one lane of traffic and the elimination of all parking was a disaster for businesses just beginning to try and recover. Independent businesses need traffic and parking to bring customers, they stress. Without those, recovery will be nearly impossible, Castanheira and Sergakis insisted.

Sergakis, who is also President of the Quebec Bar and Restaurant Owners Association, said that some 30% of storefronts may close permanently downtown by November and as many as 40% of bars and restaurants may be permanently out of business by the end of October.

Castanheira pointed out that Downtown Montreal is one-third of Quebec’s GDP, and without tax cuts landlords will not be in a position to forebear or forgive certain portions of rent so their commercial tenants — particularly their small and medium sized ones — can try and continue their recoveries.

The group also called the elimination of Plante’s “vacancy tax” imposed on commercial landlords who have vacant storefront space for a certain period of time. It was put into place to squeeze landlords who allegedly were waiting to get the strongest tenants.

Sergakis also called for the city to rationalize the base rates on commercial properties with residential ones. Commercial rates are just too much higher to make any sense in today’s economy, Sergakis added.

Sergakis and Castanheira also suggested that the city should pledge its share of GST/TVQ revenues that it obtained a raise on when Montreal was granted more taxation powers when it was declared a Metropolis several years ago to be applied against a reduction in commercial property taxes. That reduction would be passed on directly to businesses and/or landlords for the express purpose of covering rent reductions necessary for small and independent businesses to survive. The QACPO estimates that the city has collected some $67 million since 2018 for its share of GST/TVQ and that sums like that would go a long way to help commercial landlords and tenants work out rents without government support to help businesses continue.

They also want to see a proportional reduction in taxes on a square foot basis for any vacant space in commercial properties.

English school boards will continue to exist in their current form and be governed by a council of commissioners for the time being.

The English boards launched a legal challenge over the law’s constitutionality, winning a temporary stay until the full arguments could be heard in court, and thus delaying implementation of the Bill in mid-pandemic so close to the launch of the school year.English boards were given a reprieve until fall, while French boards have already been transformed into Centres de services scolaires.

The Quebec government appealed and was defeated on Thursday. The law’s constitutionality will still be argued in court, but this November electors can vote for commissioners if the boards call elections.

An appeals court panel unanimously ruled against the lifting of the stay on the application of Bill 40, which abolished school boards and replaced them with service centres and boards of parent and community representatives.

The last general election for school boards occurred in 2014. Commissioners are currently serving their sixth year after they were granted an extension on their terms by decree near the end of the previous Liberal government’s mandate. That administration attempted, and failed, to do away with boards and replace them with school councils via Bill 86.