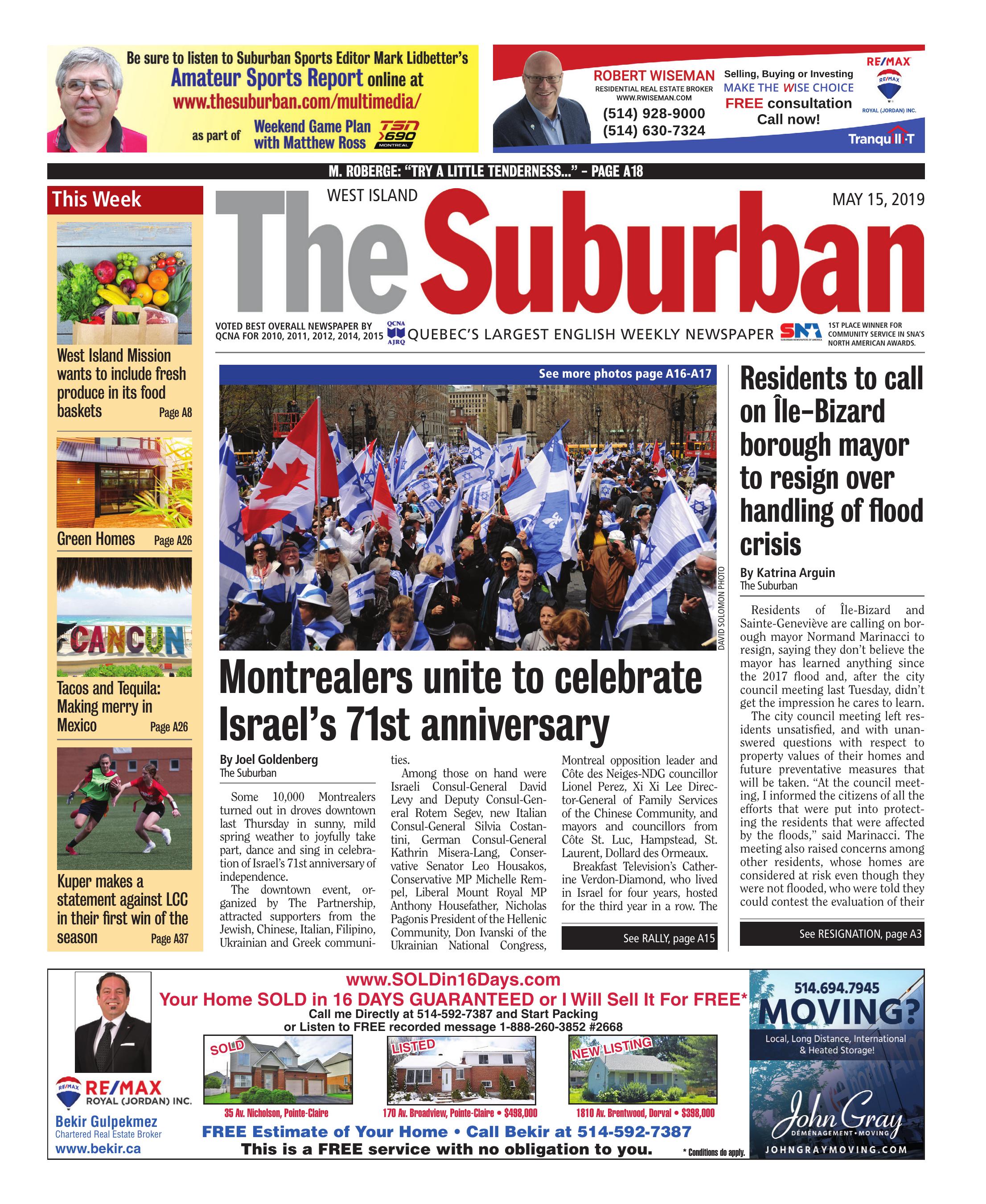 Some 10,000 Montrealers turned out in droves downtown last Thursday in sunny, mild spring weather to joyfully take part, dance and sing in celebration of Israel’s 71st anniversary of independence.

The downtown event, organized by The Partnership, attracted supporters from the Jewish, Chinese, Italian, Filipino, Ukrainian and Greek communities.

Breakfast Television’s Catherine Verdon-Diamond, who lived in Israel for four years, hosted for the third year in a row. The audience was wowed by performances from Cantor Daniel Benlolo and the Sawuti Children’s Choir from Uganda.

Levy told the cheering crowd that May 9 was not only the 71st anniversary of Israel’s independence, but also the 70th anniversary of diplomatic relations between Canada and Israel.

As he did last year, Levy invited special guests from various communities to light a Menorah on stage. The first was Xi Xi Lee, director general of Family Services for the Chinese Community of Greater Montreal.

The second guest was Reverend Orlan Racacho of the Fellowship Bible Baptist Church and a prominent member of the Montreal Filipino community.

“I love you, Israel, Shalom everyone!” Reverend Racacho said. “We bless you and share with you the pride of the Philippines, which was the only Asian country in 1948 to recognize Israel in the United Nations as the only sovereign nation under God! We love Israel!”

The third guest to light a candle was the Italian Consul-General, who began her speech in Hebrew to loud applause.

“I’m happy to join you and the Israeli and Jewish community in Montreal to celebrate together,” Costantini said. “Like Canada, this also marks the 70th anniversary of the start of diplomatic relations between Italy and Israel. In these seven decades, Israel and Italy have developed a solid friendship with an excellent level of cooperation in a wide range of areas. We continue to work together to expand and enhance this partnership every single day!”

“For those who question, just look around you if you want to know what our community looks like— we are united, strong, and we’re here forever,” said Amiel.

Next, from the Greek community, were Senator Housakos and Nicholas Pagonis, president of the Hellenic Community of Greater Montreal.

“Israel is a country that stands for democracy, freedom of religion, it is the beacon for peace in the Middle East,” Housakos said. “As former Prime Minister Stephen Harper said, ‘we will stand shoulder to shoulder through fire and water!’ I’m particularly proud, as a member of the Conservative Senate caucus, that my leader Andrew Scheer will recognize Jerusalem as the capitol of Israel! Unlike some politicians that just talk the talk, we will walk the walk and we will never stand for a Jerusalem that’s divided. Never, ever, ever!”

Next to light candles were Canadian veterans Alexander Sexton and Léopold DeMontigny.

Levy lit the last candle “on behalf of all the Canadian and Israeli diplomats, who for the last 70 years, promoted Canada-Israel relations, the people behind the State visits, the agreements, the trade delegations... the people who build the bridges that connect our two countries.”

A video message from Prime Minister Benjamin Netanyahu was played

“The Jewish people have achieved something that no other people have achieved — we are the only people who live on the same land, of the same name, speak the same language and have the same faith as we had 3,000 years ago,” Netanyahu said. “But what an odyssey did we undergo — such trials and tribulations, and suffering... but we came back to our land and 71 years ago, we reclaimed our independence. We built a State, and an army, and built a thriving economy that is a wonder to the entire world. And we built a democratic, free society for Jews and non-Jews alike that is a beacon of light in the heart of the Middle East. It’s a hope among the nations and a hope for the nations.”

“I’m here to recognize that 71 years ago, Jewish people from around the world came to Israel after the Holocaust and today Israel is one of the freest, strongest democracies, with a strong economy,” Michelle Rempel, the Calgary Conservative MP, said. “Yet, Jewish people and the State of Israel face threats every day. We have to appreciate that the Jewish people are indigenous to their homeland of Israel, and the world has to understand that, every day, we have to stand together and protect this wonderful place.”

“Israel is one of Canada’s strongest allies, and a beacon of pluralism and democratic pluralism, in a turbulent part of the world,” he said. “Our bilateral ties are deep and meaningful. I am proud of our longstanding support for Israel, and it was our Conservative Prime Minister [Harper] who was the first Canadian Prime Minister to address the Knesset. And Conservatives recognize the obvious fact that Jerusalem is the capital of Israel. Israel has a right to determine where its capital is located.”

“When I speak in the House of Commons to denounce BDS (the anti-Israel boycott, divestment and sanctions movement), the new form of anti-Semitism; when I speak out in the House of Commons to denounce anti-Semitism of every type; when I call for national action plans to combat anti-Semitism after we see B’nai Brith’s audit showing over 2,000 anti-Semitic acts happening in Canada last year; and when I work with the government to make sure we always defend Israel at the United Nations and international institutions, we know the relationship with Israel is in Canada’s interests,” the MP said. “The world needs more Israel!”

A video was then played of Prime Minister Justin Trudeau, who also hailed the close Canada-Israel relationship.

“We are partners, allies and close friends,” he added. “Earlier this week, we strongly condemned the rocket attacks on Israel by Hamas and other terrorist groups. Canada will continue to stand proudly with Israel, including through our strong support at the UN. That’s why we’ll also continue to condemn BDS and any movement that attacks our Israeli friends, Jewish-Canadians and the values we share.”

Trudeau also mentioned the two attacks on synagogues in the United States by anti-Semites in recent months.

Prizes were also given out at the rally, including an Apple Watch, two $500 Visa gift cards and a trip for two to Israel on El-Al. 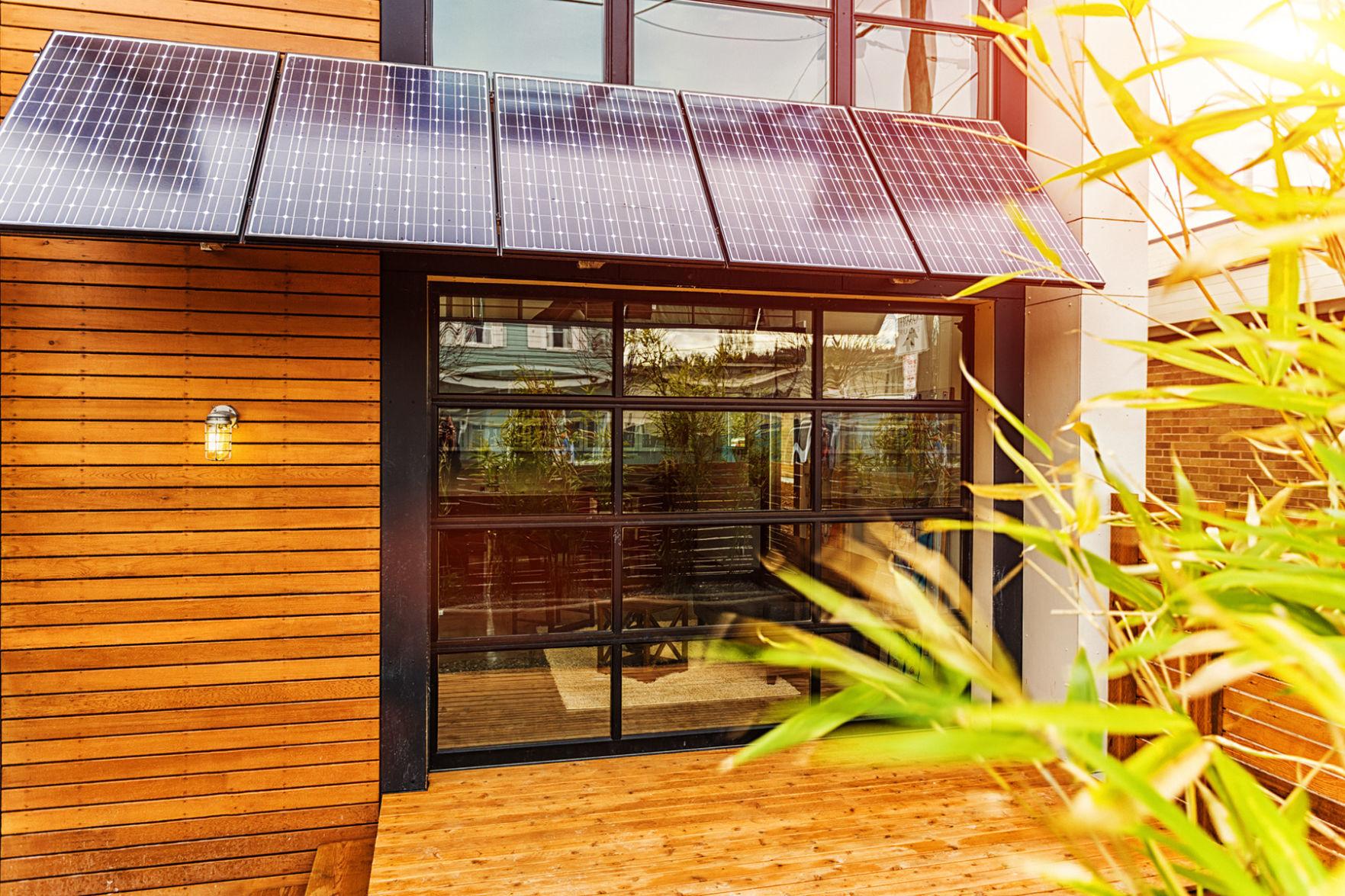 Green lifestyles, homes, and products have been in demand for much longer in Europe and in western North American cities. But the trend is moving east.

Residents of Île-Bizard and Sainte-Geneviève are calling on borough mayor Normand Marinacci to resign, saying they don’t believe the mayor has learned anything since the 2017 flood and, after the city council meeting last Tuesday, didn’t get the impression he cares to learn.

The city council meeting left residents unsatisfied, and with unanswered questions with respect to property values of their homes and future preventative measures that will be taken. “At the council meeting, I informed the citizens of all the efforts that were put into protecting the residents that were affected by the floods,” said Marinacci. The meeting also raised concerns among other residents, whose homes are considered at risk even though they were not flooded, who were told they could contest the evaluation of their home. Many are questioning Marinacci’s position as borough mayor and one resident says he will be putting together a petition for his resignation.

Residents are also gathering names for a possible class action lawsuit against the city. The mayor has no comments on the lawsuit but did say that “as a lawyer, I know that they have to prove that there is a fault and that there are damages, and that there is a causal link between the two.” 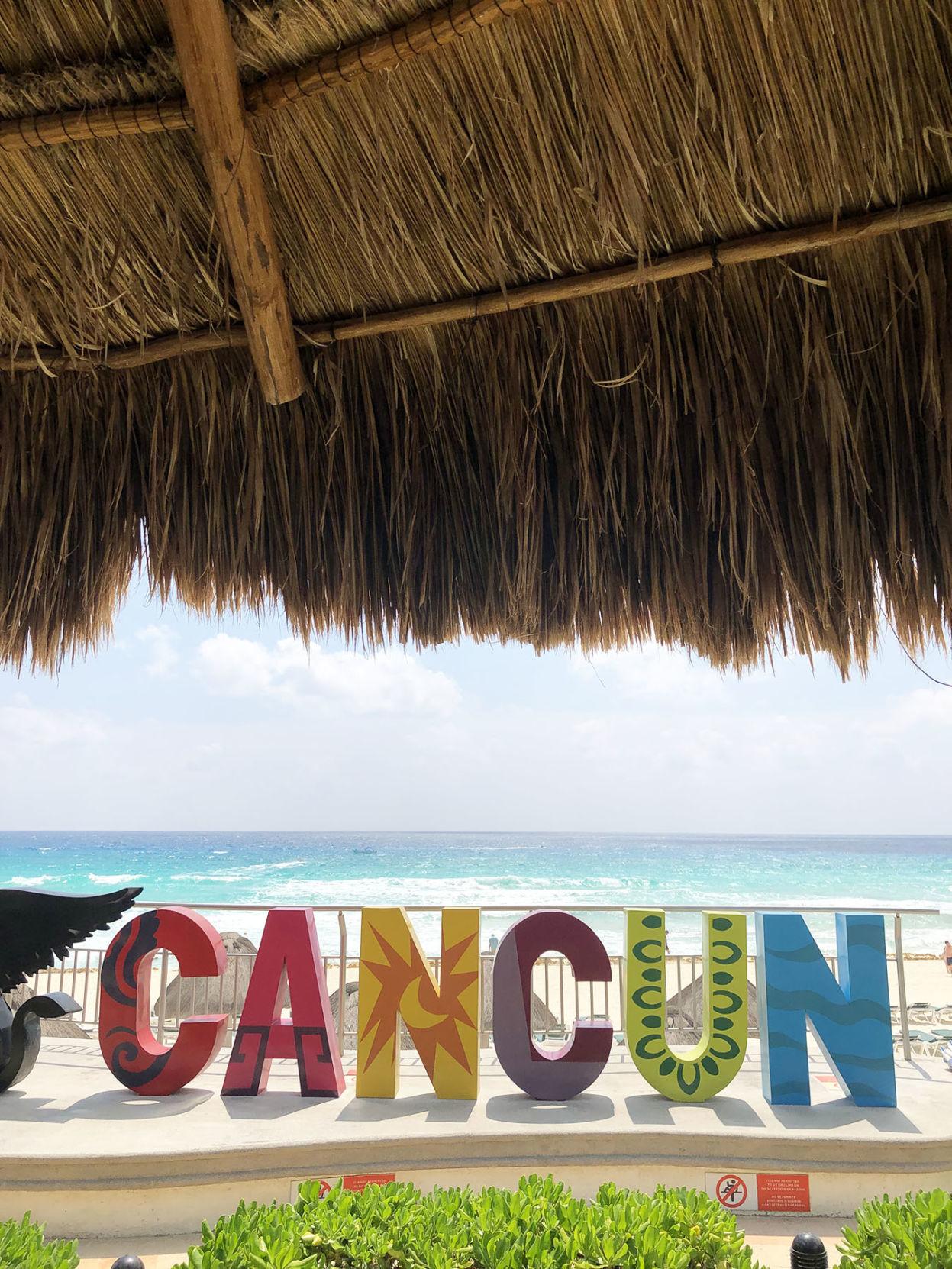 The Cancun sign at the Beachwalk restaurant is Instagram-worthy at the JW Marriott Cancun. 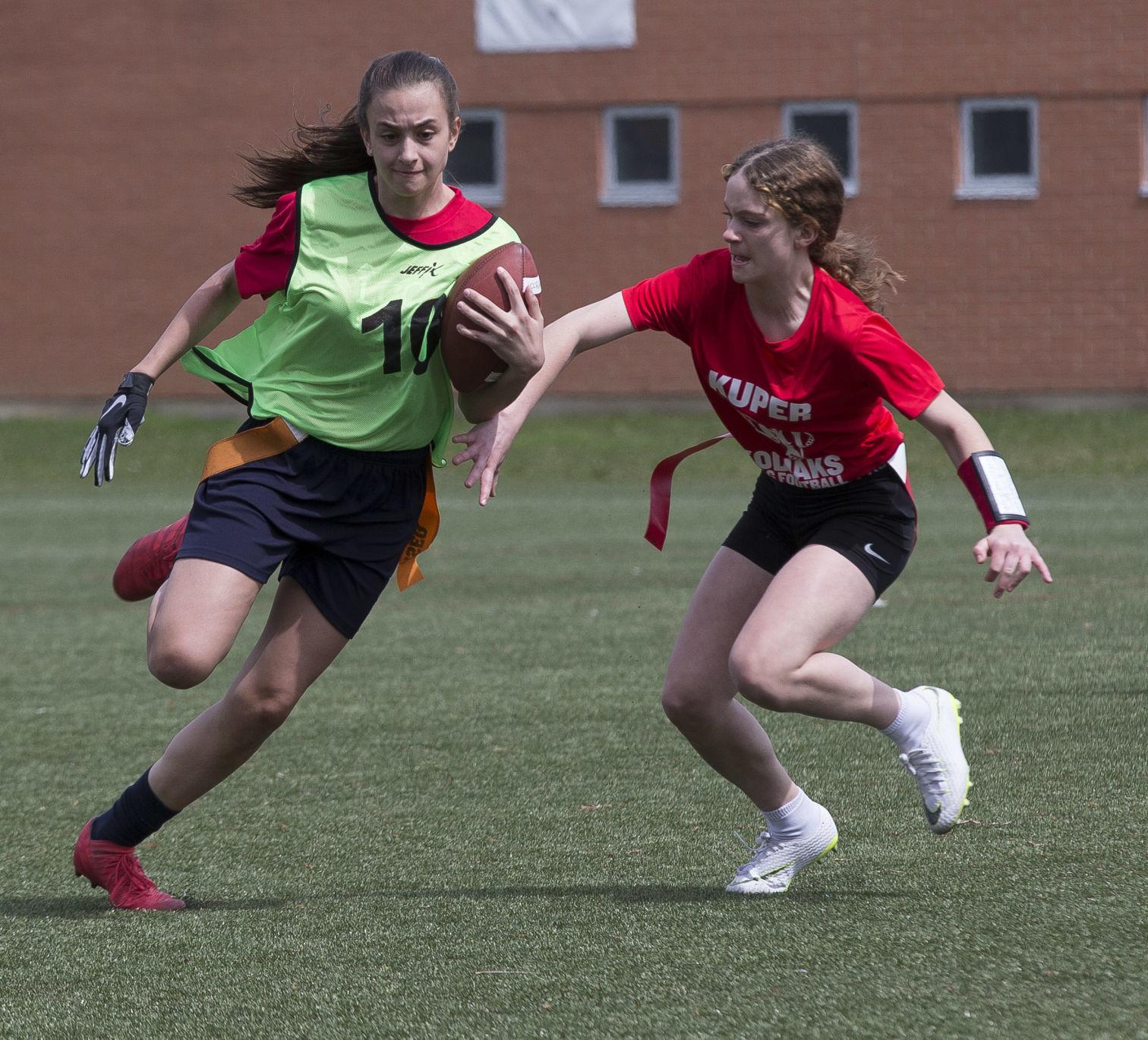 “I think the girls are – they’ve only been playing for a few weeks – so they’re learning and growing and they’re getting to know the game better,” said LCC head coach Michelle Daigneault.