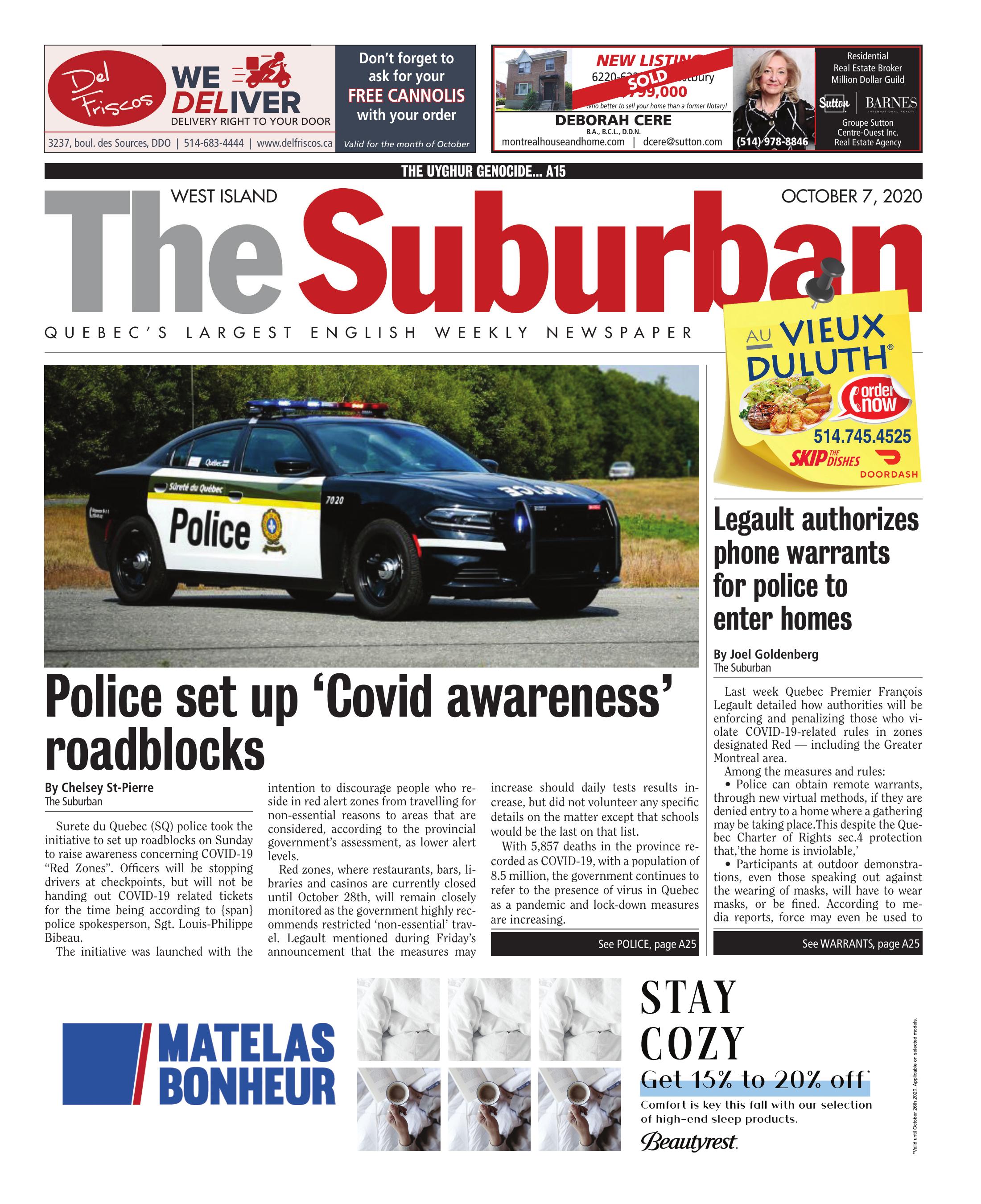 Surete du Quebec (SQ) police took the initiative to set up roadblocks on Sunday to raise awareness concerning COVID-19 “Red Zones”. Officers will be stopping drivers at checkpoints, but will not be handing out COVID-19 related tickets for the time being according to {span}police spokesperson, Sgt. Louis-Philippe Bibeau.

The initiative was launched with the intention to discourage people who reside in red alert zones from travelling for non-essential reasons to areas that are considered, according to the provincial government’s assessment, as lower alert levels.

Red zones, where restaurants, bars, libraries and casinos are currently closed until October 28th, will remain closely monitored as the government highly recommends restricted ‘non-essential’ travel. Legault mentioned during Friday’s announcement that the measures may increase should daily tests results increase, but did not volunteer any specific details on the matter except that schools would be the last on that list.

With 5,857 deaths in the province recorded as COVID-19, with a population of 8.5 million, the government continues to refer to the presence of virus in Quebec as a pandemic and lock-down measures are increasing.

The presence of roadblocks, almost-instant police warrants to enter private residences obtained by telephone and the closure of social gathering spots while schools and gyms remain in operation has generated confusion amongst Montrealers and Quebecers living in “Red Zones”.

Through this initiative, police stated that they intend to raise awareness. The purpose of the roadblocks appear to be an attempt by police to protect and serve the public from potentially breaking rules related to “red zones.” During protests across the province over the past few months, officers have stood back and allowed persons in close contact to group together rallying against government measures.

Last week Quebec Premier François Legault detailed how authorities will be enforcing and penalizing those who violate COVID-19-related rules in zones designated Red — including the Greater Montreal area.

Among the measures and rules:

• Police can obtain remote warrants, through new virtual methods, if they are denied entry to a home where a gathering may be taking place.This despite the Quebec Charter of Rights sec.4 protection that,’the home is inviolable,’

• Participants at outdoor demonstrations, even those speaking out against the wearing of masks, will have to wear masks, or be fined. According to media reports, force may even be used to disperse protests.

• Gatherings will also be banned at public parks — if participants do not disperse, they will be fined.

• People living in Red zones cannot eat in restaurants or participate in gatherings in zones designated Orange — proof of residency will be required at Orange-zone restaurants. People can go to their own cottages in Orange zones, but they have to bring items from their Red-zone home.

• Signs will be posted on roads, with designations of Red zone border limits.