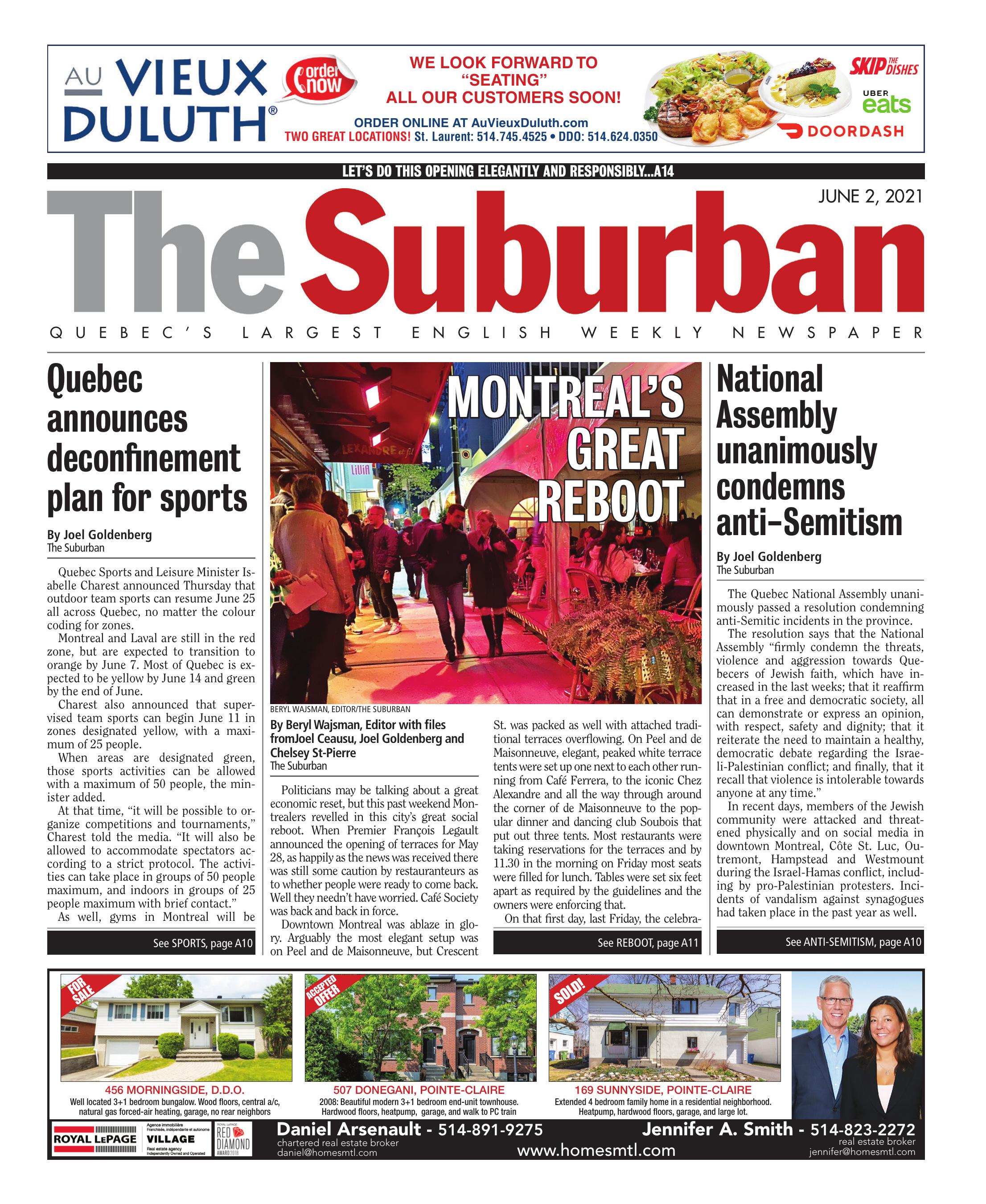 Politicians may be talking about a great economic reset, but this past weekend Montrealers revelled in this city’s great social reboot. When Premier François Legault announced the opening of terraces for May 28, as happily as the news was received there was still some caution by restauranteurs as to whether people were ready to come back. Well they needn’t have worried. Café Society was back and back in force.

Downtown Montreal was ablaze in glory. Arguably the most elegant setup was on Peel and de Maisonneuve, but Crescent St. was packed as well with attached traditional terraces overflowing. On Peel and de Maisonneuve, elegant, peaked white terrace tents were set up one next to each other running from Café Ferrera, to the iconic Chez Alexandre and all the way through around the corner of de Maisonneuve to the popular dinner and dancing club Soubois that put out three tents. Most restaurants were taking reservations for the terraces and by 11.30 in the morning on Friday most seats were filled for lunch. Tables were set six feet apart as required by the guidelines and the owners were enforcing that.

On that first day, last Friday, the celebration of the return of Montreal’s joie de vivre went on from midday to midnight. Chez Alexandre’s Alain Creton told The Suburban, “You could feel our lungs fill with air again. Our spirits came alive.” That sentiment was shared by all owners we talked to in almost the same exact words. But the restaurant reopening affected other businesses as well. Paul Teboul of the legendary men’s store L’Uomo Montreal told The Suburban that the terrace reopenings, “brought people onto the streets and the walk-in trade that stopped with the restaurant closings has come back stronger than since last summer.”

The joy among diners was palpable. Banker Kan Mangachi told us that, “All I can say is cheers! We’re tasting liberty!” Businessman Alexandre Baillargeon said, “It is so good and so important to get out of our walls and be in touch with people again.” And it did seem as if everyone was out. Premier Legault and his wife put out video on social media of them dining on a terrace and we had a chance to say hello to Mayoral candidate Denis Coderre who was out with a few friends. The joy was truly unconfined.

And it continued through the weekend as the streets teemed with happy echoes framed in blue-gray hazes as spirits flowed freely again. It was so busy that the one downside The Suburban heard from a dozen establishments was that they needed more staff. They only had a week to prepare for the reopening and many service personnel had taken jobs in other industries while some others were still content to stay home on government support. But most owners felt that this problem would be resolved in a matter of weeks.

Laval had the same scene. Jimmy Kosmas was so busy prepping for the big reopening this weekend that he had to turn away take-out clients last week because he was hip deep in preparations. It’s no mystery why apart from Centropolis, Table51 at Carrefour Laval has Laval’s most booming terrasse business, a scene right out of downtown Montreal terrasse cultures but in a suburban mall parking lot with constant line-ups, lots of people-watching, and lots of cops – not for breaking up parties or enforcing covid restrictions – but hungry SQ patrollers waiting for their take-out Gucci Burgers and Braised Beef Poutine.

At his Montreal location off Décarie, he welcomed his fiercely loyal Montreal crowd to his expansive outdoor seating, all of them hankering for a sit-down Table51 experience for the better part of a year. And all indications are that no one has missed a beat. “Euphoria, absolute euphoria” he told The Suburban, describing his feelings on re-opening weekend. “People were just enthusiastic to come out and see each other and begin socializing again. Montrealers are tired of eating out of a box.”

Eastward to Fleury the iconic La Molisana was rocking and rolling from Friday on. “The response was so overwhelming from the customers,” owner Giovanna Giancaspro said. “I could not believe it. We are so busy, because our delivery and our takeout has continued throughout the weekend, and we thought that it would slow down, but yesterday and after Friday at one point I didn’t even know what to do with myself, we were so busy.”

At Place Vertu in St. Laurent, shoppers enjoyed eating on the terrasses at Allo Mon Coco, ITALI.CO and Starbucks — expressing a palpable sense of relief, as did those in charge. “It’s a blessing,” said Israil, who was at Allo Mon Coco digging into a hearty breakfast. “I appreciate this, it’s something we’ve missed for a long time. Eating breakfast in the car is not my style.”

Chris Prattas, owner of ITALO.CO said that “it’s been a year now we’ve been closed, and we’re very happy just to get back to a little bit of normality. We don’t know what’s going to happen going forward, but one step at a time and we’re happy to take the first step.”

Starbucks customer Linda Zeesman was thrilled. “Finally!” she said. “I want to be outside having coffee and eating lunch on a terrasse. I’m very happy.”

In the West Island, the response from clients was effusive. Finding an available seat on a terrace was like finding a rare gem. Nick from Bellissimo in Dorval — the largest terrace in the West Island — said, “We are very happy to see clients again.” Kevin Groleau from Rockaberry — with three West Island locations, told The Suburban, “It’s been quite a challenge to get everything ready and we are very excited to greet our customers.” Chris, who owns Sources Blvd’s ever popular Elixor, said “People are tired of staying home, eating out of a cardboard box. They want to see people, they want to dine out and be served.”

Bistro Burgertown’s Luigi in Dorval told us with a mixture of relief and satisfaction that, “We are glad to be back and happy to see familiar faces and new faces. We are looking forward to a good summer.”

Quebec Sports and Leisure Minister Isabelle Charest announced Thursday that outdoor team sports can resume June 25 all across Quebec, no matter the colour coding for zones.

Montreal and Laval are still in the red zone, but are expected to transition to orange by June 7. Most of Quebec is expected to be yellow by June 14 and green by the end of June.

Charest also announced that supervised team sports can begin June 11 in zones designated yellow, with a maximum of 25 people.

When areas are designated green, those sports activities can be allowed with a maximum of 50 people, the minister added.

At that time, “it will be possible to organize competitions and tournaments,” Charest told the media. “It will also be allowed to accommodate spectators according to a strict protocol. The activities can take place in groups of 50 people maximum, and indoors in groups of 25 people maximum with brief contact.”

As well, gyms in Montreal will be opened June 7, and masks will have to be worn. A Quebec City gym where COVID rules were not followed led to hundreds of infections in the area earlier this year.

For areas still designated red and orange, “activities will remain permitted without contact, with distancing,” said the minister, referring to such activities as tennis and golf.

A flag is waved during a May 22 pro-Palestinian protest in downtown Montreal. Anti-Semitic signage and slogans have been heard during such protests.

The resolution says that the National Assembly “firmly condemn the threats, violence and aggression towards Quebecers of Jewish faith, which have increased in the last weeks; that it reaffirm that in a free and democratic society, all can demonstrate or express an opinion, with respect, safety and dignity; that it reiterate the need to maintain a healthy, democratic debate regarding the Israeli-Palestinian conflict; and finally, that it recall that violence is intolerable towards anyone at any time.”

In recent days, members of the Jewish community were attacked and threatened physically and on social media in downtown Montreal, Côte St. Luc, Outremont, Hampstead and Westmount during the Israel-Hamas conflict, including by pro-Palestinian protesters. Incidents of vandalism against synagogues had taken place in the past year as well.

The resolution was tabled by D’Arcy McGee MNA David Birnbaum, and co-sponsored by the MNAs for Gaspé, Laurier-Dorion, Chomedey, Marie-Victorin and Rimouski.

“The situation experienced by my fellow citizens is unacceptable,” Birnbaum said. “In 2021, we can no longer tolerate behaviour of this kind. Let’s hope that the signal will be heard by the whole population. Hatred and violence towards Jewish Quebecers must cease immediately.”

The Centre for Israel and Jewish Affairs welcomed the motion.

“For weeks, Quebec Jews have been at the receiving end of an alarming number of anti-Semitic incidents including assaults, vandalism and death threats,” said Eta Yudin, CIJA Quebec’s vice-president. “This situation is intolerable and without precedent, and does not reflect Quebec’s values.”

Yudin added that elected officials “have sent a strong message to all Quebecers that anti-Semitism has no place in Quebec society.

“While there is still much work to be done, today’s motion is a step in the right direction and demonstrates that our elected officials understand the gravity of the threat and will not allow it to fester.”