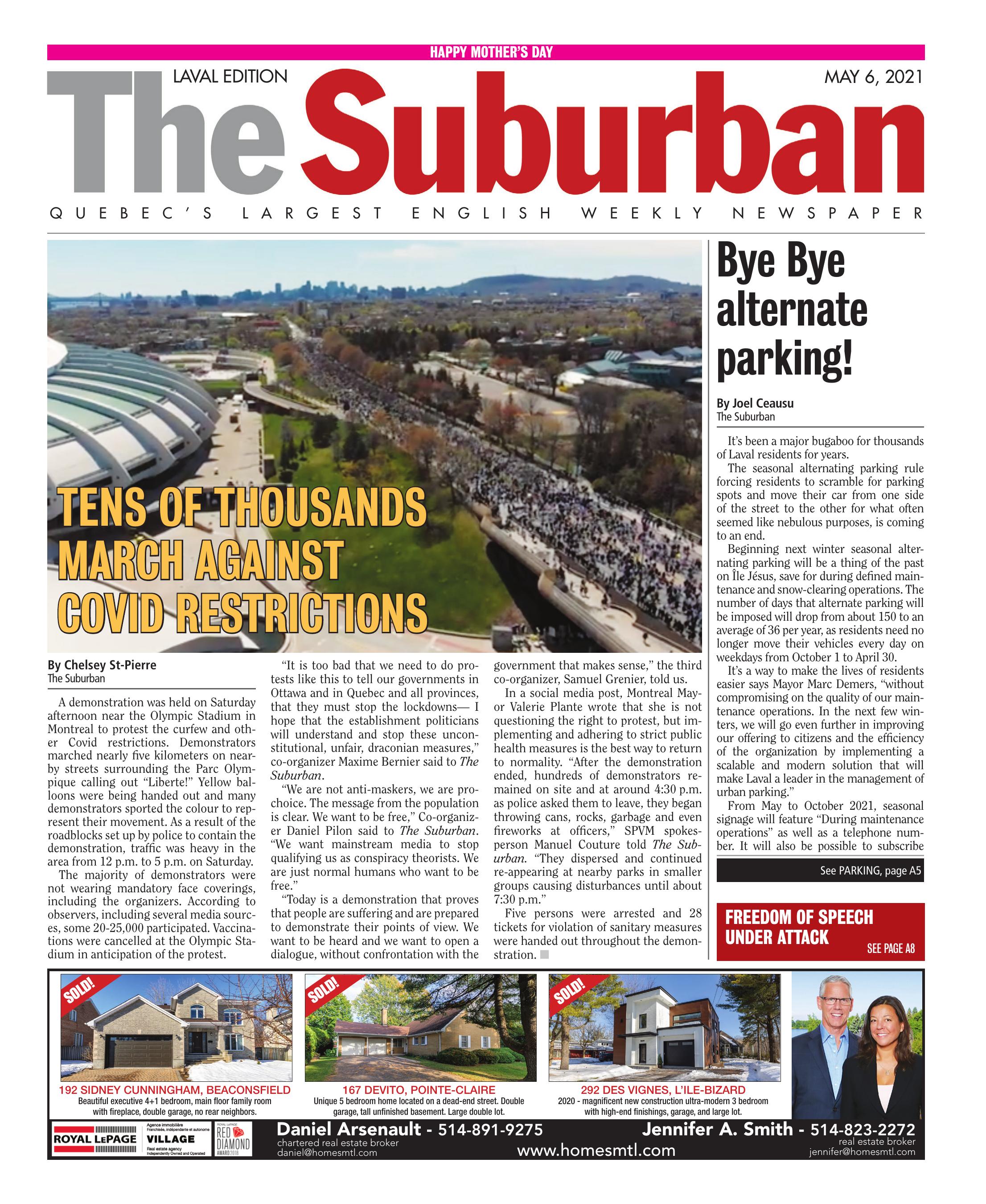 A demonstration was held on Saturday afternoon near the Olympic Stadium in Montreal to protest the curfew and other Covid restrictions. Demonstrators marched nearly five kilometers on nearby streets surrounding the Parc Olympique calling out “Liberte!” Yellow balloons were being handed out and many demonstrators sported the colour to represent their movement. As a result of the roadblocks set up by police to contain the demonstration, traffic was heavy in the area from 12 p.m. to 5 p.m. on Saturday.

The majority of demonstrators were not wearing mandatory face coverings, including the organizers. According to observers, including several media sources, some 20-25,000 participated. Vaccinations were cancelled at the Olympic Stadium in anticipation of the protest.

“It is too bad that we need to do protests like this to tell our governments in Ottawa and in Quebec and all provinces, that they must stop the lockdowns— I hope that the establishment politicians will understand and stop these unconstitutional, unfair, draconian measures,” co-organizer Maxime Bernier said to The Suburban.

“We are not anti-maskers, we are pro-choice. The message from the population is clear. We want to be free,” Co-organizer Daniel Pilon said to The Suburban. “We want mainstream media to stop qualifying us as conspiracy theorists. We are just normal humans who want to be free.”

“Today is a demonstration that proves that people are suffering and are prepared to demonstrate their points of view. We want to be heard and we want to open a dialogue, without confrontation with the government that makes sense,” the third co-organizer, Samuel Grenier, told us.

In a social media post, Montreal Mayor Valerie Plante wrote that she is not questioning the right to protest, but implementing and adhering to strict public health measures is the best way to return to normality. “After the demonstration ended, hundreds of demonstrators remained on site and at around 4:30 p.m. as police asked them to leave, they began throwing cans, rocks, garbage and even fireworks at officers,” SPVM spokesperson Manuel Couture told The Suburban. “They dispersed and continued re-appearing at nearby parks in smaller groups causing disturbances until about 7:30 p.m.”

Five persons were arrested and 28 tickets for violation of sanitary measures were handed out throughout the demonstration.

New signs will specify operations in place, as alternate parking will be imposed on less than 40 days per year.

It’s been a major bugaboo for thousands of Laval residents for years.

The seasonal alternating parking rule forcing residents to scramble for parking spots and move their car from one side of the street to the other for what often seemed like nebulous purposes, is coming to an end.

Beginning next winter seasonal alternating parking will be a thing of the past on Île Jésus, save for during defined maintenance and snow-clearing operations. The number of days that alternate parking will be imposed will drop from about 150 to an average of 36 per year, as residents need no longer move their vehicles every day on weekdays from October 1 to April 30.

It’s a way to make the lives of residents easier says Mayor Marc Demers, “without compromising on the quality of our maintenance operations. In the next few winters, we will go even further in improving our offering to citizens and the efficiency of the organization by implementing a scalable and modern solution that will make Laval a leader in the management of urban parking.”

From May to October 2021, seasonal signage will feature “During maintenance operations” as well as a telephone number. It will also be possible to subscribe to automated calls and other technological means (texts, emails or through the Neige Laval app) to know the status of parking on any given street from October 1 to April 30.

The following year, in the spring of 2022, the city will launch a tender to phase in light panels beginning in fall to allow dynamic and flexible parking management for maintenance activities, regardless of season.

Over the past two winters, pilot projects have been held in 6 restricted areas, representing nearly 5,300 residences, and the results are in says the city: 78% of citizens responded that the proposed operation was an improvement. The number of properly parked vehicles during maintenance operations varied from 82 to 93 percent depending on area, which shows that 85% of residents understood the new rules.

As many who saw cynicism in the move in the runup to an election, former Laval-des-Rapides councillor Pierre Anthian scoffed at the news. “Since November 2014 which is one month after I quit the mayor’s party, I proposed the idea that Mouvement Lavallois is now promoting to resolve the seasonal parking situation.”

Anthian says he promoted an almost identical solution which was defeated twice by the ruling party, and pegged the cost of the city’s refusal to change the rules at $14.4 million over 6 winters in terms of gas, tickets and towing charges levied against Laval residents. “I don’t know what makes me angrier: that they stole my idea to take the credit or that they imposed over 30 million unnecessary chores of moving vehicles before 8 a.m. by residents when there was no snow removal operation. According to my calculation that represents 51 million minutes, a century!”

“I’m always fascinated by the schemes that Mouvement lavallois uses to reject a political adversary’s proposal to prevent them from scoring points,” he told The Suburban, “and then come out with the same proposition later to make it look like it was their idea.”

Alternate parking schemes of some kind have been in place in Laval since the late 1990s.