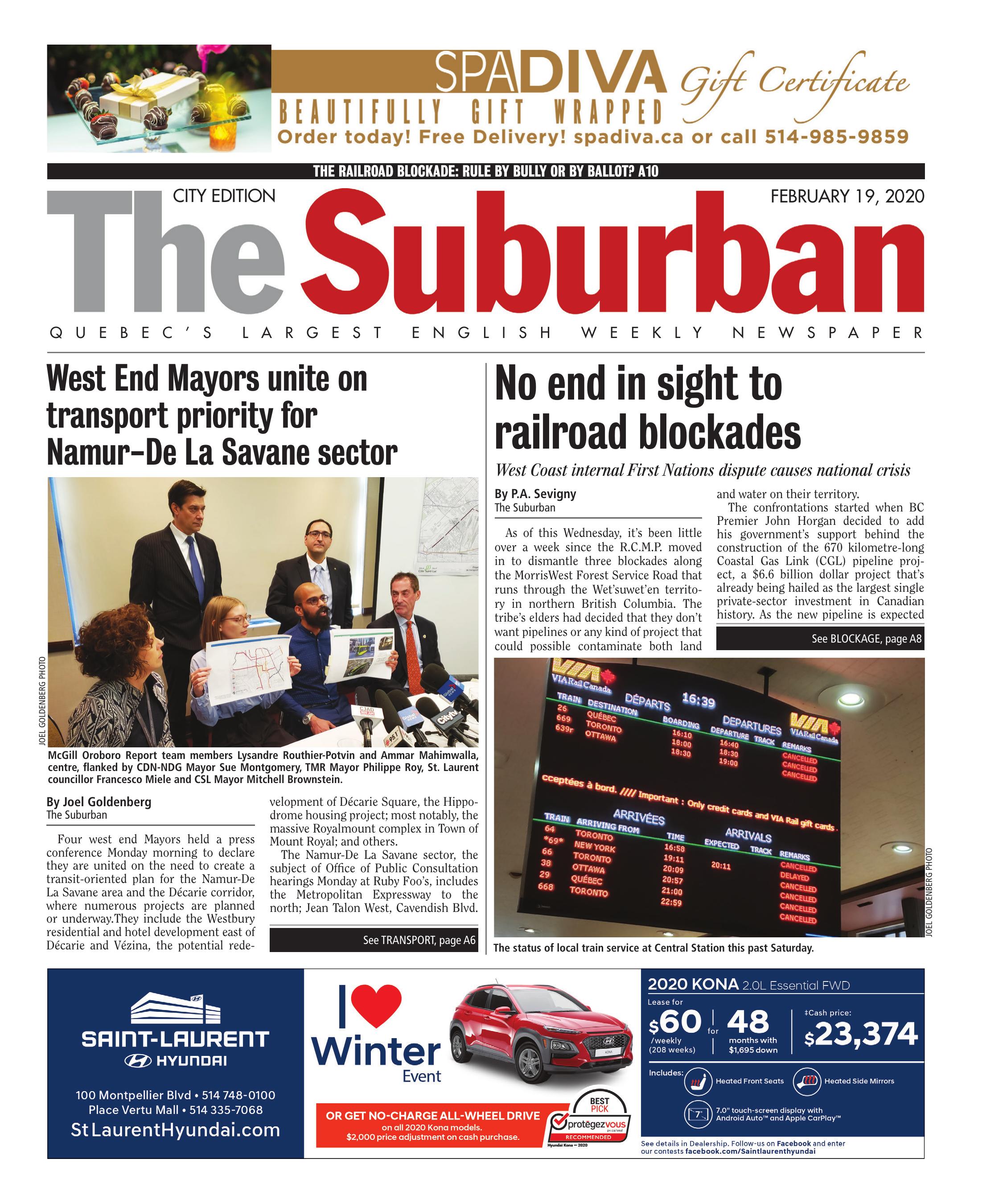 Four west end Mayors held a press conference Monday morning to declare they are united on the need to create a transit-oriented plan for the Namur-De La Savane area and the Décarie corridor, where numerous projects are planned or underway.They include the Westbury residential and hotel development east of Décarie and Vézina, the potential redevelopment of Décarie Square, the Hippodrome housing project; most notably, the massive Royalmount complex in Town of Mount Royal; and others.

“This is an historic moment for Montreal to showcase transit-oriented development,” Brownstein said. “It became very clear that if we all want our projects to succeed, we will have to agree on ways to move people more easily and freely in the future. We need urgent and major action in public transit, and we need the government and transit agencies, and the cities and the developers to work together,” he added, “to put transit first, not as an afterthought. It must be built into the equation now.”

Roy said the Mayors are already “looking at appropriate transit solutions to optimize the proximity to the Métro and reduce the reliance on private vehicles. We are all looking at green mobility solutions that will help overcome the presently highly congested roads around Namur–De La Savane.” Montgomery said her borough’s residents have dreamed of a new neighbourhood at the Hippodrome site, a “complete neighbourhood with all the services necessary for a great quality of life” and a “green and inclusive neighbourhood affordable to all.This dream would not be possible without an effective transit network.”

DeSousa issued a statement that a transit-oriented plan is essential and will also “help to attract future residents to their job opportunities in our borough.” Miele said that, as elected officials, “we have a responsibility to have an urban plan that’s oriented towards mass transit. “If we want to have 50,000 more people in an area like this one, we absolutely need to bring the actors together with a mass transit philosophy.”

They also cited the May 2019 Junca-Adenot report, initiated by Quebec Minister Chantal Rouleau and Montreal Mayor Valérie Plante, which said creative transit solutions are needed before an already bad traffic situation in the area becomes much worse. Part of the process involved CSL and the borough of St. Laurent together making a request to the McGill University urban planning school for their proposed “coordinated planning vision” for the sector, and the result was a December 2019 report, endorsed by the four Mayors, called Namur–De la Savane: Envisioning Change for the Heart of the Island, also known as the Oroboro Report.

The report proposes an active green network, an “all-electric (including trams without tracks) transit network connecting the different area projects, decking over the Décarie expressway [to improve access], the long-awaited Cavendish link between CSL and St. Laurent, and “new bike and pedestrian connections to the Hippodrome under the CP rail tracks from Décarie Square and Westbury projects.”Team member Ammar Mahimwalla explained that as the area will transition from light industrial and low-density to high-density residential and employment, “transportation and land use are key elements, and that’s the two elements we focus on in our report.” (The report can be seen at cotesaintluc.org/transitfirst.)

These proposals “can address the challenges of this very fragmented district,” the CSL Mayor said.

City_news
No end in sight to railroad blockades

Railroad protest on the South Shore.

The status of local train service at Central Station this past Saturday.

As of this Wednesday, it’s been little over a week since the R.C.M.P. moved in to dismantle three blockades along the MorrisWest Forest Service Road that runs through the Wet’suwet’en territory in northern British Columbia. The tribe’s elders had decided that they don’t want pipelines or any kind of project that could possibly contaminate both land and water on their territory.

The confrontations started when BC Premier John Horgan decided to add his government’s support behind the construction of the 670 kilometre-long Coastal Gas Link (CGL) pipeline project, a $6.6 billion dollar project that’s already being hailed as the largest single private-sector investment in Canadian history. As the new pipeline is expected to transport natural gas from Dawson Creek to an outlet near the Kitimat harbour where it’s to be sold and shipped to assorted Asian markets, web-borne documents indicate that the pipeline is also going to cut through the entire Wet’suwet’en territory on its way to the oceanside terminal.

CGL has been negotiating with assorted indigenous communities since 2012, and the pipeline has been approved by some 20 First Nations Band councils – including five of the six councils of the Wet’suwet’en nation. However, the nation’s hereditary chiefs claim that band councils are only responsible for territory within their own reserve, their law indicates that the councils have no jurisdiction over the entire nation. The hereditary chiefs claim to have never consented to the pipeline’s construction because they believe the project will pose a risk to the land, their water and their way of life.

However, on December 31, 2019, the BC Supreme Court granted CGL an ‘expanded’ injunction that allowed them to access the land and move anyone and everyone out of the way of the projected pipeline. Following the court’s decision, the tribe’s elders issued the company an eviction notice because the company was violating traditional Wet’suwet’en law. In order to enforce their decision, the tribe also built three blockades along the road in order to block the company’s access to the land. On the 6th of February, during the early hours of the morning, heavily armed RCMP officers dressed in tactical gear moved in on the first blockade and arrested the first six of 21 people who would be arrested during similar raids over the next two days.

As pictures of the arrests tore their way through social media, it only took a few hours before demonstrations began to stop traffic while barricades began to be thrown up on railroad tracks across the nation. Ten days later, much of the nation’s multi-billion dollar railroad infrastructure is still effectively paralyzed because of a protest that’s already caused millions of dollars worth of assorted commercial damage throughout the nation.

“These protesters, these activists may have the luxury of spending days at a time at a blockade, but they need to check their privilege and let people whose job depends on the railway system ...do their job,” said Conservative leader Andrew Scheer.

Following last weekend’s meeting with protest leaders near the Tyendinaga Mohawk community located near one of the critical blockades that’s closed down the busy Montreal – Toronto rail link, Canadian Indigenous Services Minister Marc Miller took the initiative when he agreed to sit down for talks that were “...sometimes painful” but that “...some progress” had been made on issues that mattered to both parties. While police are keeping a close eye on the protest, reports indicate that Prime Minister Trudeau is also working closely with his ministers in order to deal with the issue that could easily take a turn for the worse. Local Mohawk leader Kenneth Deer said that the barricades will come down -including that on the Candiac line — when the Wet’suwet’en elders have come to some kind of an agreement with CGL and the government.

“When they (the Wet’suwet’en elders) are satisfied, they can say ‘Thank you for your support, and you can take the barricades down now’,” he said, “...because it’s not up to us to take down those barricades.”