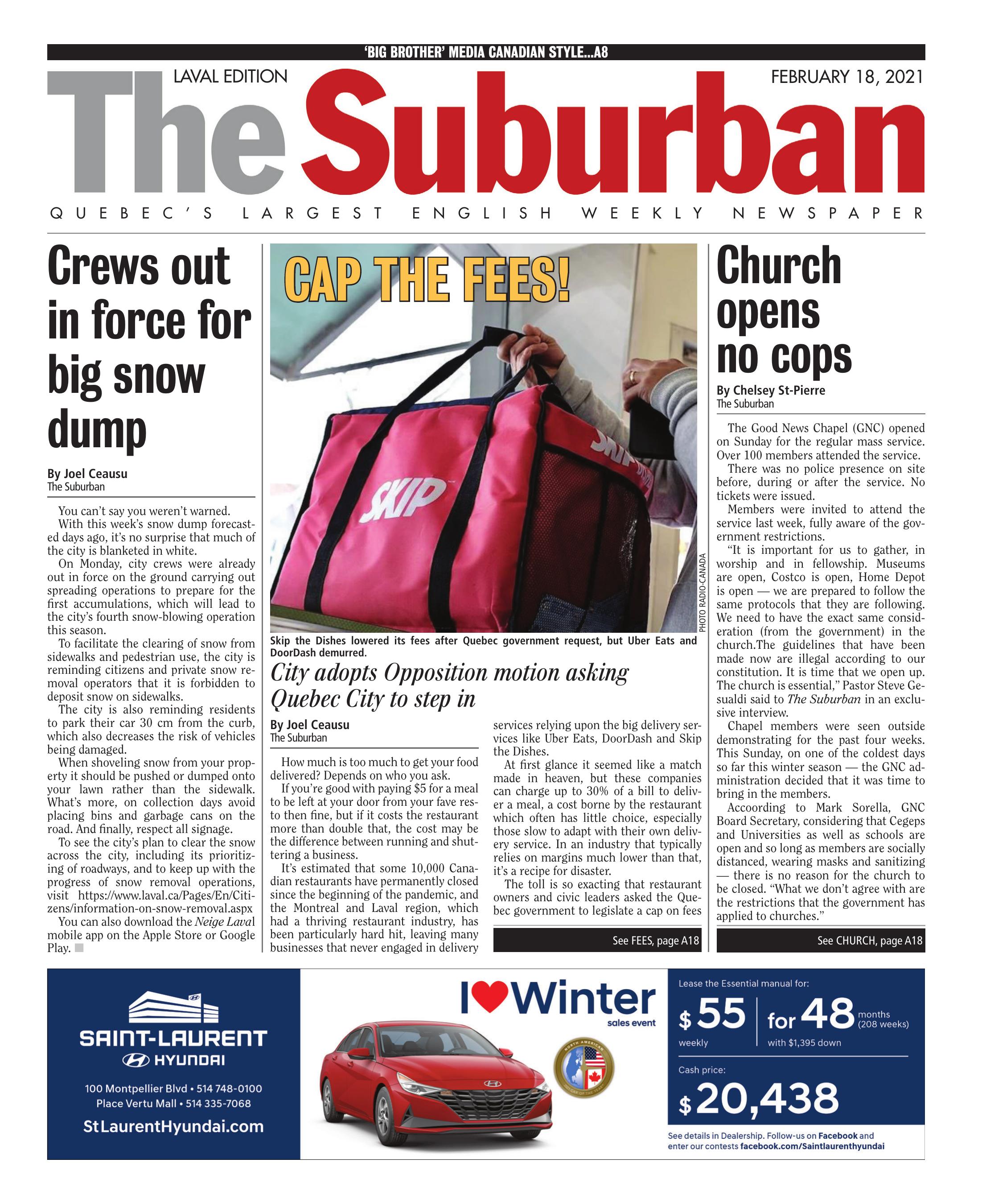 Local service Restoloco charges consumer about $3 and about half of what the big companies charge the restaurants.

Skip the Dishes lowered its fees after Quebec government request, but Uber Eats and DoorDash demurred.

How much is too much to get your food delivered? Depends on who you ask.

If you’re good with paying $5 for a meal to be left at your door from your fave resto then fine, but if it costs the restaurant more than double that, the cost may be the difference between running and shuttering a business.

It’s estimated that some 10,000 Canadian restaurants have permanently closed since the beginning of the pandemic, and the Montreal and Laval region, which had a thriving restaurant industry, has been particularly hard hit, leaving many businesses that never engaged in delivery services relying upon the big delivery services like Uber Eats, DoorDash and Skip the Dishes.

At first glance it seemed like a match made in heaven, but these companies can charge up to 30% of a bill to deliver a meal, a cost borne by the restaurant which often has little choice, especially those slow to adapt with their own delivery service. In an industry that typically relies on margins much lower than that, it’s a recipe for disaster.

The toll is so exacting that restaurant owners and civic leaders asked the Quebec government to legislate a cap on fees charged to restaurants. After Quebec Minister André Lamontagne asked them to do so, only SkipTheDishes agreed, lowering them to 18.75%, but DoorDash and Uber Eats demurred.

There are smaller, more affordable local operations like Restoloco which charges about $3 to the consumer and much lower rates to restaurants, but those are slow in getting on board with restaurants and the public.

Ontario and British Columbia have already introduced such measures and Quebec City has stated it will act. In Quebec’s third largest city the voices are unanimously in favour. ‘’We are glad that Quebec is taking action to reduce the rate charged by the various delivery platforms. Laval restaurateurs need all the support we can offer them” said Opposition leader Michel Trottier, after his party’s motion to ask Quebec City to cap fees at 15% was adopted at council last month. Thousands of restaurants have closed in Quebec over the last year, says motion sponsor and Fabreville councillor Claude Larochelle, and the ongoing restrictions “have put Laval’s 953 restaurants in a very difficult financial position.”

Deputy Mayor Stephen Boyer, responsible for economic issues, told The Suburban his party agreed unanimously with the motion because the situation is urgent. “The big companies that dominate the market are public companies that are very aggressive in their marketing and spend a lot of money on maintaining their presence and market share.” Their pricing has very little to do with the local restaurants who depend on them, or the drivers in their employ, who themselves are often in economically vulnerable positions. “Most of these companies are backed by big investors so that’s where the money is going, it’s not going to the drivers.”

So many restaurants were desperate to stay open that they took anything they could in terms of a lifeline to their customers says Boyer. “Many that remain open are working much harder and longer, and the large margins taken by the delivery services eat up any chance of profit.” They are just working to keep the doors open.

For his part, Larochelle said “After refusing to reduce the 8.5% interest rate and ban the 5% late penalty to homeowners who are unable to pay their tax bills, the Demers administration has finally agreed to take action to help our merchants. The food service industry is important in Laval, if we want to keep it, measures must be put in place to protect it.”

Laval_news
Crew out in force for big snow dump

You can’t say you weren’t warned.

With this week’s snow dump forecasted days ago, it’s no surprise that much of the city is blanketed in white.

On Monday, city crews were already out in force on the ground carrying out spreading operations to prepare for the first accumulations, which will lead to the city’s fourth snow-blowing operation this season.

To facilitate the clearing of snow from sidewalks and pedestrian use, the city is reminding citizens and private snow removal operators that it is forbidden to deposit snow on sidewalks.

The city is also reminding residents to park their car 30 cm from the curb, which also decreases the risk of vehicles being damaged.

When shoveling snow from your property it should be pushed or dumped onto your lawn rather than the sidewalk. What’s more, on collection days avoid placing bins and garbage cans on the road. And finally, respect all signage.

To see the city’s plan to clear the snow across the city, including its prioritizing of roadways, and to keep up with the progress of snow removal operations, visit https://www.laval.ca/Pages/En/Citizens/information-on-snow-removal.aspx

You can also download the Neige Laval mobile app on the Apple Store or Google Play.

The Good News Chapel (GNC) opened on Sunday for the regular mass service. Over 100 members attended the service.

There was no police presence on site before, during or after the service. No tickets were issued.

Members were invited to attend the service last week, fully aware of the government restrictions.

“It is important for us to gather, in worship and in fellowship. Museums are open, Costco is open, Home Depot is open — we are prepared to follow the same protocols that they are following. We need to have the exact same consideration (from the government) in the church.The guidelines that have been made now are illegal according to our constitution. It is time that we open up. The church is essential,” Pastor Steve Gesualdi said to The Suburban in an exclusive interview.

Chapel members were seen outside demonstrating for the past four weeks. This Sunday, on one of the coldest days so far this winter season — the GNC administration decided that it was time to bring in the members.

Accoording to Mark Sorella, GNC Board Secretary, considering that Cegeps and Universities as well as schools are open and so long as members are socially distanced, wearing masks and sanitizing — there is no reason for the church to be closed. “What we don’t agree with are the restrictions that the government has applied to churches.”

“There are definitely a lot of mixed emotions but I am convinced that church is an essential service. We see people at Costco’s and Walmarts — to me the church is as essential as getting food from a grocery store.” GNC member Daniel said to The Suburban.

During the service, many GNC members expressed their joyful emotions with the return of the Sunday service. Several were seen weeping and smiling joyfully. The ambiance was jovial with uplifting live music and members cheered as Pastor Steve walked onto the stage.

“Religious leaders are expected to lead by example and to encourage their worshippers to abide by the rules concerning masks, hand washing and physical distancing.” Premier Francois Legault said on Feb. 8th during the major COVID-related announcement where churches were given permission for 10 attendees at each service.

According to GNC church member, Lucy Conte, approximately 250 people attend the Sunday service at GNC each Sunday. A member could attend only once in 6 months if only ten people were allowed at a time she added.

“Any limitation is not sufficient, it is not good for the government to impose any regulation on the church.” Pastor Steve said to The Suburban. “We need to pray together now more than ever before.”