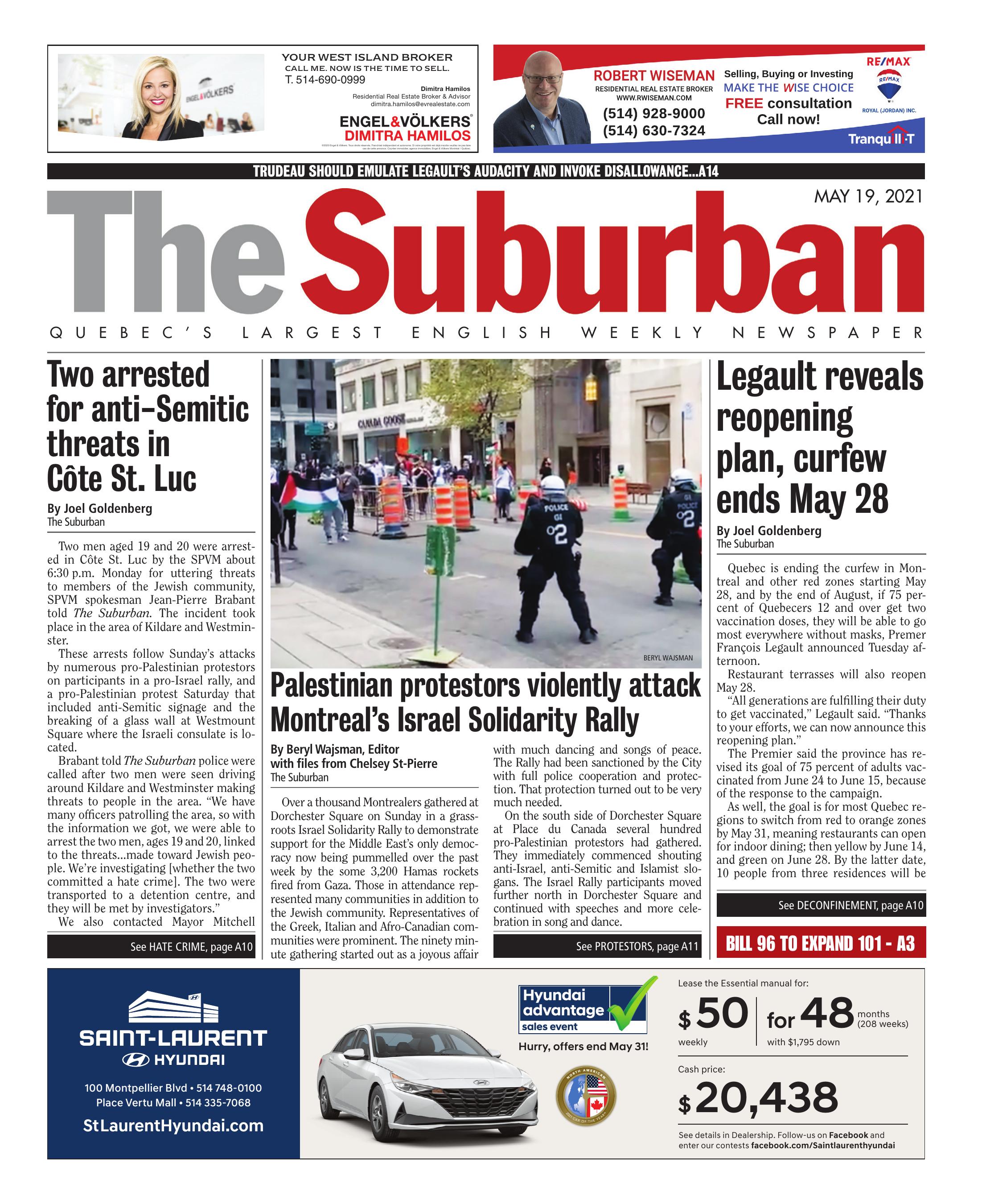 It started out as a joyous afternoon

Over a thousand Montrealers gathered at Dorchester Square on Sunday in a grassroots Israel Solidarity Rally to demonstrate support for the Middle East’s only democracy now being pummelled over the past week by the some 3,200 Hamas rockets fired from Gaza. Those in attendance represented many communities in addition to the Jewish community. Representatives of the Greek, Italian and Afro-Canadian communities were prominent. The ninety minute gathering started out as a joyous affair with much dancing and songs of peace. The Rally had been sanctioned by the City with full police cooperation and protection. That protection turned out to be very much needed.

On the south side of Dorchester Square at Place du Canada several hundred pro-Palestinian protestors had gathered. They immediately commenced shouting anti-Israel, anti-Semitic and Islamist slogans. The Israel Rally participants moved further north in Dorchester Square and continued with speeches and more celebration in song and dance.

The police called in more riot squad officers to hold the pro-Palestinian group in check in Place du Canada as several times dozens of them tried to cross René-Levesque Blvd, pull down police tape and break through police lines that were keeping the two groups apart. Despite the effective and heavy police presence, several attacks succeeded.

The first was a small band of pro-Palestinians who moved up Peel St. and pepper sprayed some of the Rally participants. Police officers on foot and on bicycles subdued them. A half hour later another band came from the east crossing Mansfield and beating up several Rally participants — one of whom lay unconscious for a few minutes on the ground — and they too were subdued by police who arrived quickly.

The worst attack came as the Israel Rally ended and participants were leaving Dorchester Square. A gang of some twenty men arrived from the east along René-Levesque and mounted the steps of Mary Queen of the World Cathedral. The riot police quickly moved in front of them just as they started to hurl large objects, rocks, smoke bombs and at least one green-smoke astringent projectile at several hundred Israel supporters who were milling about on the south end of Dorchester Square some thirty feet away. These reporters were in the midst of it and as our our eyes teared and our lungs seared we were told it was tear gas.

After that attack the remainder of the Israel Rally participants dispersed quickly. The pro-Palestinian group did not. Their taunts and projection of items were now turned onto the police. Police loudspeakers blared a warning that if they did not disperse they would be detained for participating in a now “illegal” gathering.

Minutes after that warning, police officers and riot squad members rushed north along Peel. Hundreds of pro-Palestinians had come out of four subway stops near de Maisonneuve and along St. Catherine and were attempting to make their way to Dorchester Square apparently to confront the Israel supporters who remained. Police presence increased and they were able to hold back what was now a mob by using tear gas and rushed them pushing them east along St.Catherine. But not before cars bearing Israeli flags were attacked by the protestors and in one case an Israeli flag was pulled off a car with the female driver still inside. The Suburban has a video of that incident as well as another showing two pro-Palestinians banging in the door of another car that had an Israeli flag on it.

{div}Aaron Simon, who was at Sunday’s pro-Israel rally and was hit in the back of the head with a rock while holding an Israel flag, causing swelling and a painful cut, was appalled by the violence from the pro-Palestinian side and disappointed in much of the media’s coverage, except that of The Suburban, which was on the scene at all times. “This was an Intifada in Montreal,” he said. “It was rage, and to me it was an act of terrorism. If it wasn’t for the police, it would have been a bloody mess. Clearly, the city is not taking this seriously enough. The Jewish community is very scared. This is out of control, we shouldn’t be this scared. This was a peaceful rally, and there was a mob scene, with people trying to get to us. They were out for blood. All we wanted to do was go back home. {/div}

At around three pm police received information that pro-Palestinians on social media were sending out messages for supporters to make their way to St. Catherine and Peel. It took well into Sunday night for police and riot squad officers to get control of the west central downtown core as de Maisonneuve, St. Catherine and René-Levesque were closed due to the havoc created by what some observers have put at some one thousand pro-Palestinians holding downtown hostage. The siege by the pro-Palestinian rioters was finally brought under control at around 9.30pm. Three officers and multiple Israel Rally attendees were injured. Police arrested 15 protestors and rioters on charges ranging from armed assault, obstruction of justice to criminal mischief.

Pro-Palestinian rioters stand on a bus shelter in downtown Montreal during Saturday's protest.

Two men aged 19 and 20 were arrested in Côte St. Luc by the SPVM about 6:30 p.m. last week for uttering threats to members of the Jewish community, SPVM spokesman Jean-Pierre Brabant told The Suburban. The incident took place in the area of Kildare and Westminster.

Brabant told The Suburban police were called after two men were seen driving around Kildare and Westminster making threats to people in the area. “We have many officers patrolling the area, so with the information we got, we were able to arrest the two men, ages 19 and 20, linked to the threats...made toward Jewish people. We’re investigating [whether the two committed a hate crime]. The two were transported to a detention centre, and they will be met by investigators.”

We also contacted Mayor Mitchell Brownstein about the incident. “Police intervened immediately and made arrests,” the Mayor told The Suburban. “The highest level of surveillance is being provided by station 9, supported by other neighborhood stations and Cote St. Luc Public Security.”

Also on the CSL Ideas Facebook page, members alerted the public of social media threats of possible anti-Jewish riots in Outremont and Boisbriand this Saturday, and utterances of CSL being an “area filled with Israelis,” that “any Israeli flag gets replaced with a Palestinian flag” and that “any Israeli [who gets] in front of us gets beat up.”

Hampstead has also “increased the Public Security surveillance on the synagogue and streets, and has increased patrols” throughout the town, Councillor Michael Goldwax wrote on the Hampstead Community Dialogue Facebook page.

Quebec is ending the curfew in Montreal and other red zones starting May 28, and by the end of August, if 75 percent of Quebecers 12 and over get two vaccination doses, they will be able to go most everywhere without masks, Premer François Legault announced Tuesday afternoon.

Restaurant terrasses will also reopen May 28.

“All generations are fulfilling their duty to get vaccinated,” Legault said. “Thanks to your efforts, we can now announce this reopening plan.”

The Premier said the province has revised its goal of 75 percent of adults vaccinated from June 24 to June 15, because of the response to the campaign.

As well, the goal is for most Quebec regions to switch from red to orange zones by May 31, meaning restaurants can open for indoor dining; then yellow by June 14, and green on June 28. By the latter date, 10 people from three residences will be able to meet.

Legault also announced that on May 28, gatherings of eight will be allowed in private yards, travel between regions will be allowed and “theatres and stadiums, indoor and outdoors, will be allowed to welcome 250 people per section for a maximum of 2,500 people.”

Starting June 11, “bar terrasses will also reopen, and starting June 25, people who have received two doses of vaccine will be able to see each other in homes without masks and distancing. Summer camps will reopen and festivals will be authorized for up to 2,500 people without sections. By the end of August, if we reach our goal of 75 percent of the population over 12 with two doses, masks won’t be mandatory in most public places. CEGEPs and universities will open in person.

“Please continue to follow the rules and get vaccinated with the first and second doses.”