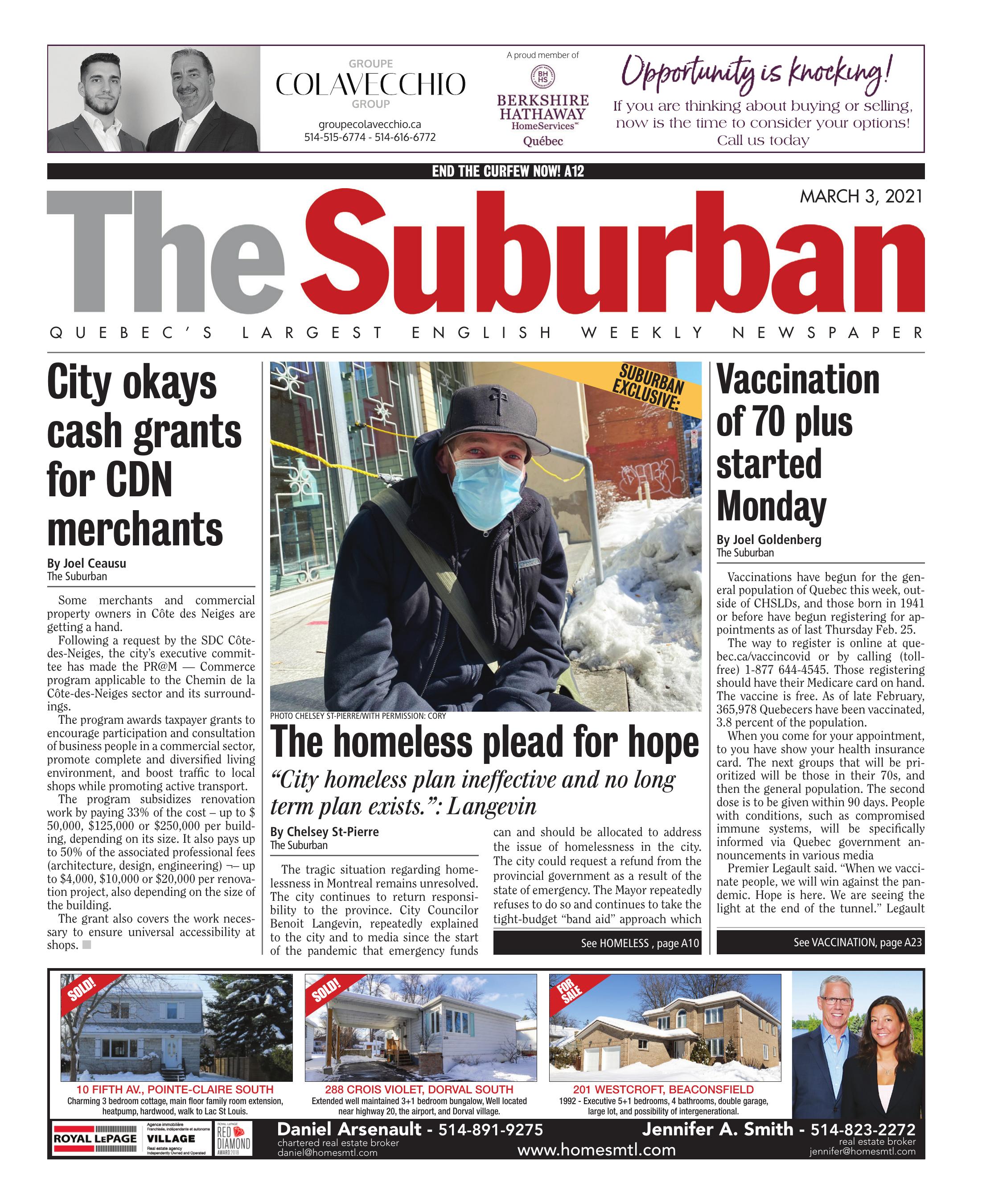 The tragic situation regarding homelessness in Montreal remains unresolved. The city continues to return responsibility to the province. City Councilor Benoit Langevin, repeatedly explained to the city and to media since the start of the pandemic that emergency funds can and should be allocated to address the issue of homelessness in the city. The city could request a refund from the provincial government as a result of the state of emergency. The Mayor repeatedly refuses to do so and continues to take the tight-budget “band aid” approach which according to Langevin barely puts a dent in the issue as a whole.

The COVID-19 pandemic has resulted in a dramatic increase in homelessness. At a recent city council meeting last Thursday, it was evident that no long term plan is in place. When Langevin attempted to address the issue, Plante told the administration that “We are coming up with a plan in a few days, we are waiting for Quebec.”

The city failed to effectively address the issue of homelessness throughout the COVID-19 crisis with an ineffective short term plan and in mid-February, the long term plan has yet to be open for discussion. “Opening and closing shelters and resource centers as time moves along only adds to the fragility of an already vulnerable population.” Langevin said to The Suburban.

The Suburban received permission from several homeless individuals to film and photograph them as they bravely spoke out about their circumstances, more specifically delving into how they are affected by the COVID-19 crisis and what day to day circumstances look like for them with the resources currently in place.

“Covid really did a lot of damage since this started.” Cory said to The Suburban. “The curfew really affected a lot of people because there are only two places where homeless people can stay overnight and if they get kicked out of those places, then they are out on the street. Sometimes it gets to -25 degrees and people are out on the street.” When asked about the curfew Cory told The Suburban that “If we cannot find a place to go, then we have no choice but to sleep outside — we suffer the consequences.”

Another interviewee named Junior became homeless following the loss his job as a result of the COVID-19 crisis. Junior told The Suburban that he was previously a US marine, an MMA fighter and a bodyguard. Aside from maintaining his day to day survival in the last 9 months since he became homeless after he lost his job due to COVID, Junior also helps out others at the Open Door center where he spends most of his time.

“The city can do a lot more, who needs a skating rink for the homeless? They need shelter, they need food and clothing. There are not many resources for the homeless right now.” Junior said to The Suburban.

Luon, another man staying at the Open Door center, told The Suburban that he tried to speak to Mayor Plante when she visited the area after the death of Raphael Andre and was told to go through the ‘proper channels’ and that he ultimately felt like his question was dismissed and left unanswered “When the Mayor says something, it has to be clear and our questions deserve answers. I am a citizen, am I not? We are lucky to have places like Open Door that are run and funded by people who care.” Luon said.

Some merchants and commercial property owners in Côte des Neiges are getting a hand.

Following a request by the SDC Côte-des-Neiges, the city’s executive committee has made the PR@M — Commerce program applicable to the Chemin de la Côte-des-Neiges sector and its surroundings.

The program awards taxpayer grants to encourage participation and consultation of business people in a commercial sector, promote complete and diversified living environment, and boost traffic to local shops while promoting active transport.

The grant also covers the work necessary to ensure universal accessibility at shops.

Vaccinations have begun for the general population of Quebec this week, outside of CHSLDs, and those born in 1941 or before have begun registering for appointments as of last Thursday Feb. 25.

The way to register is online at quebec.ca/vaccincovid or by calling (toll-free) 1-877 644-4545. Those registering should have their Medicare card on hand. The vaccine is free. As of late February, 365,978 Quebecers have been vaccinated, 3.8 percent of the population.

When you come for your appointment, to you have show your health insurance card. The next groups that will be prioritized will be those in their 70s, and then the general population. The second dose is to be given within 90 days. People with conditions, such as compromised immune systems, will be specifically informed via Quebec government announcements in various media

Premier Legault said. “When we vaccinate people, we will win against the pandemic. Hope is here. We are seeing the light at the end of the tunnel.” Legault said the Quebec population still has to be prudent in the coming weeks.”It will take three weeks before the vaccine takes effect, and we also have to be prudent because of the new variants, which are more contagious,” he added. “If we’re not careful in the next few weeks, we could see cases booming.”

Legault said that if the process goes well, more entertainment venues and religious institutions can open.” Now is stillnot the time to gather, we don’t want to see a spike, a third wave. I’m convinced that by being prudent, we saved lives,” he added.

The quebec.ca/vaccincovid website says, “the start of vaccination does not mean the end of health measures. It will take several months to protect a sufficiently large proportion of the population with the vaccine. Physical distancing of two metres, wearing a mask or face covering and handwashing must be maintained until further notice.”