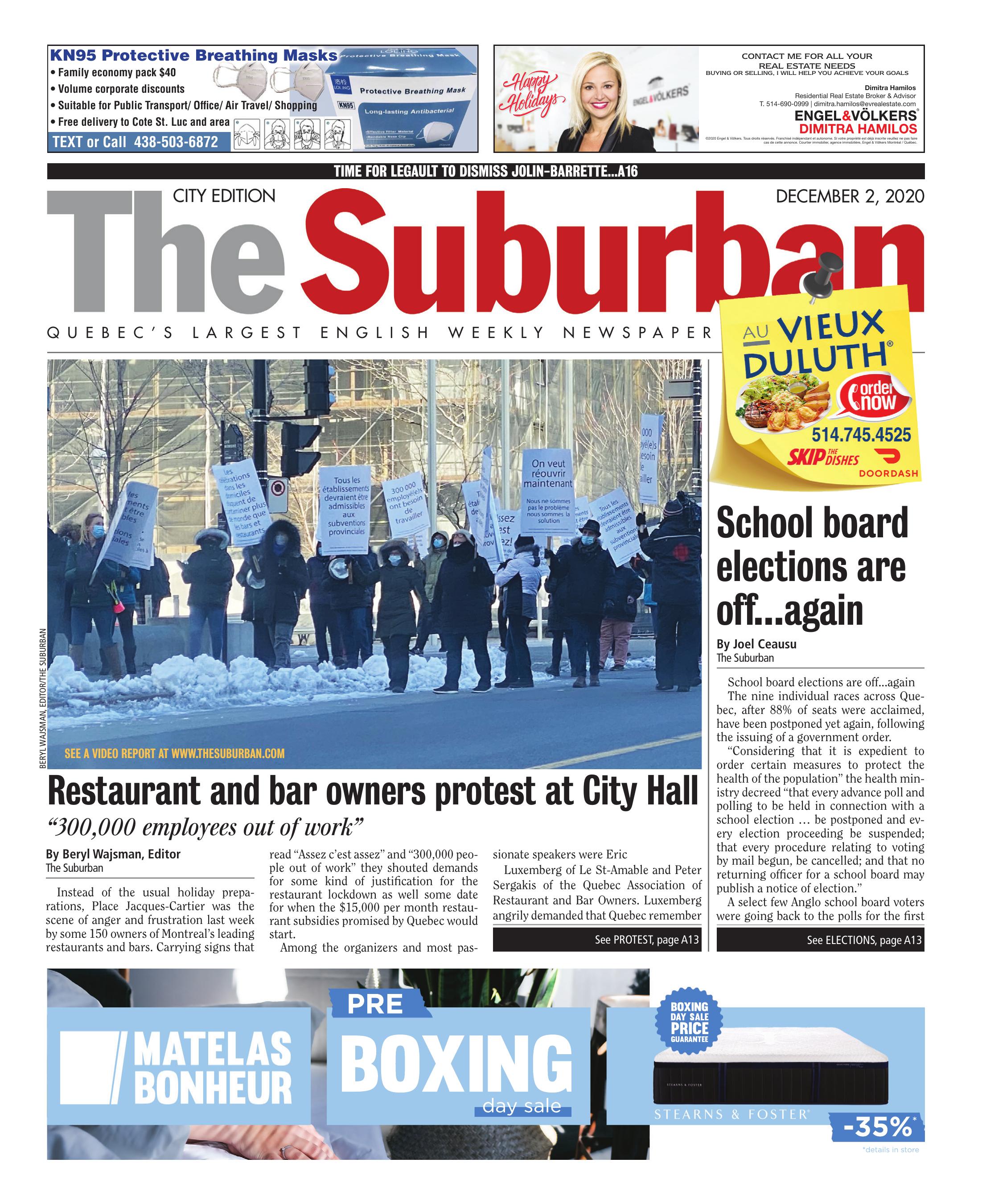 Instead of the usual holiday preparations, Place Jacques-Cartier was the scene of anger and frustration last week by some 150 owners of Montreal’s leading restaurants and bars. Carrying signs that read “Assez c’est assez” and “300,000 people out of work” they shouted demands for some kind of justification for the restaurant lockdown as well some date for when the $15,000 per month restaurant subsidies promised by Quebec would start.

Among the organizers and most passionate speakers were Eric

Luxemberg of Le St-Amable and Peter Sergakis of the Quebec Association of Restaurant and Bar Owners. Luxemberg angrily demanded that Quebec remember that “300,000 people are unemployed in the province because of the restaurant lockdown and that means people have trouble paying rent, car payments and even food.” Sergakis told The Suburban that perhaps no more than “30% of the restaurant industry may survive and there just won’t be anything left.” He was incredulous that Health Ministry spokesperson Marie-Claude Harvey admitted last week that restaurants were closed because of 400 positive tests “since the beginning of the pandemic.” Sergakis asked, “For 400 tests! Just 400?” He also reminded reporters that on Sept. 25 Public Health Director Horacio Arruda said ,”there is no evidence to support closing restaurants,” and then closed them just a few days later even though restaurants were following provincial guidelines on distancing, capacity and hygiene that in some cases cost restaurants tens of thousands of dollars.

Many protestors brought pots and pans and carrying the signs marched to City Hall before dispersing. Among the participants were members of the Union des tenanciers de Bar du Québec and the Corporation des propriétaires de bars, brasseries et tavernes du Québec, whose president Renaud Poulin demanded that the Quebec government ease eligibility requirements for aid, which at the moment, he said, preclude establishments operating slot machines and featuring nude dancing.

Speaking at a press conference held soon after the protest ended, Premier Legault addressed the delay in aid saying that he and Pierre Fitzgibbon, the province’s minister of economy and innovations, are aware of the issue and are “pushing” to solve it. “But, I also know that some restaurants, for all kinds of reasons, don’t want to present invoices and proof of the rent they pay. We manage the money of Quebecers, so we cannot pay without having any proof.”

School board elections are off...again

The nine individual races across Quebec, after 88% of seats were acclaimed, have been postponed yet again, following the issuing of a government order.

“Considering that it is expedient to order certain measures to protect the health of the population” the health ministry decreed “that every advance poll and polling to be held in connection with a school election … be postponed and every election proceeding be suspended; that every procedure relating to voting by mail begun, be cancelled; and that no returning officer for a school board may publish a notice of election.”

A select few Anglo school board voters were going back to the polls for the first time in six years on December 20. Elections of chairs and commissioners were supposed to take place on November 1, but since all positions to be filled by elections were located in red zone territories, the balloting was halted. After the widescale acclamations of commissioners and chairs earlier this month — 89 of the 104 positions — only a handful of posts remain contested, and Quebec’s education ministry was working with Élections Québec to get the process rolling again in the context of Covid-19 safety measures.