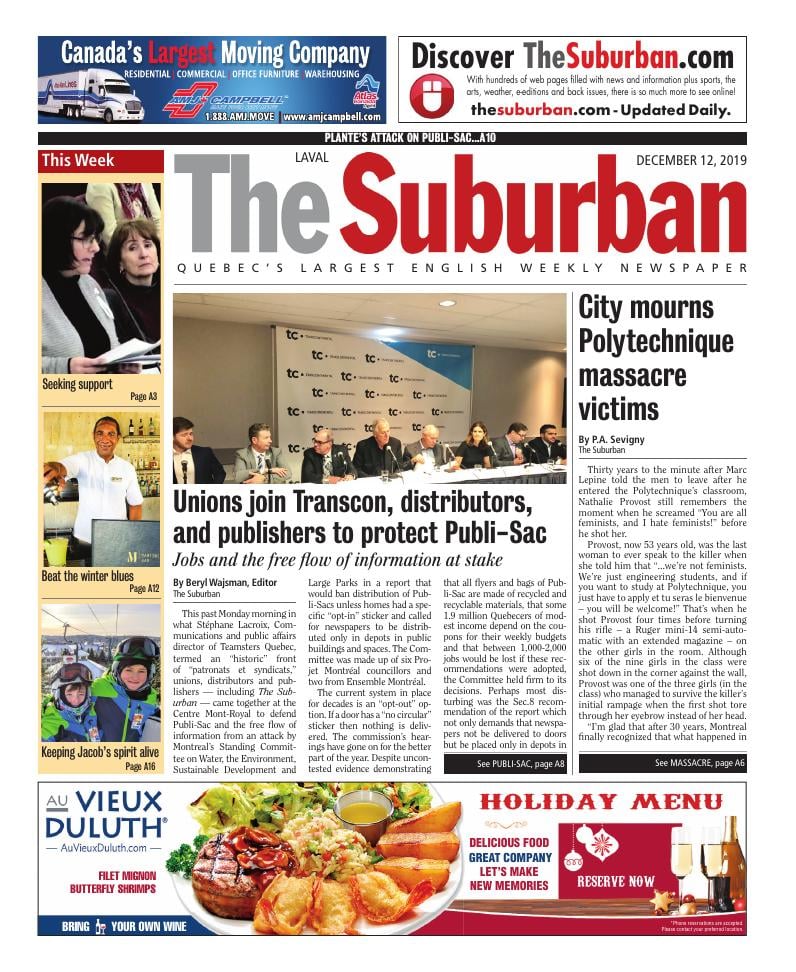 City_news
featured
Unions join Transcontinental, distributors and publishers in alliance to protect Publi-Sac,jobs and the free flow of information
By Beryl Wajsman, Editor The Suburban 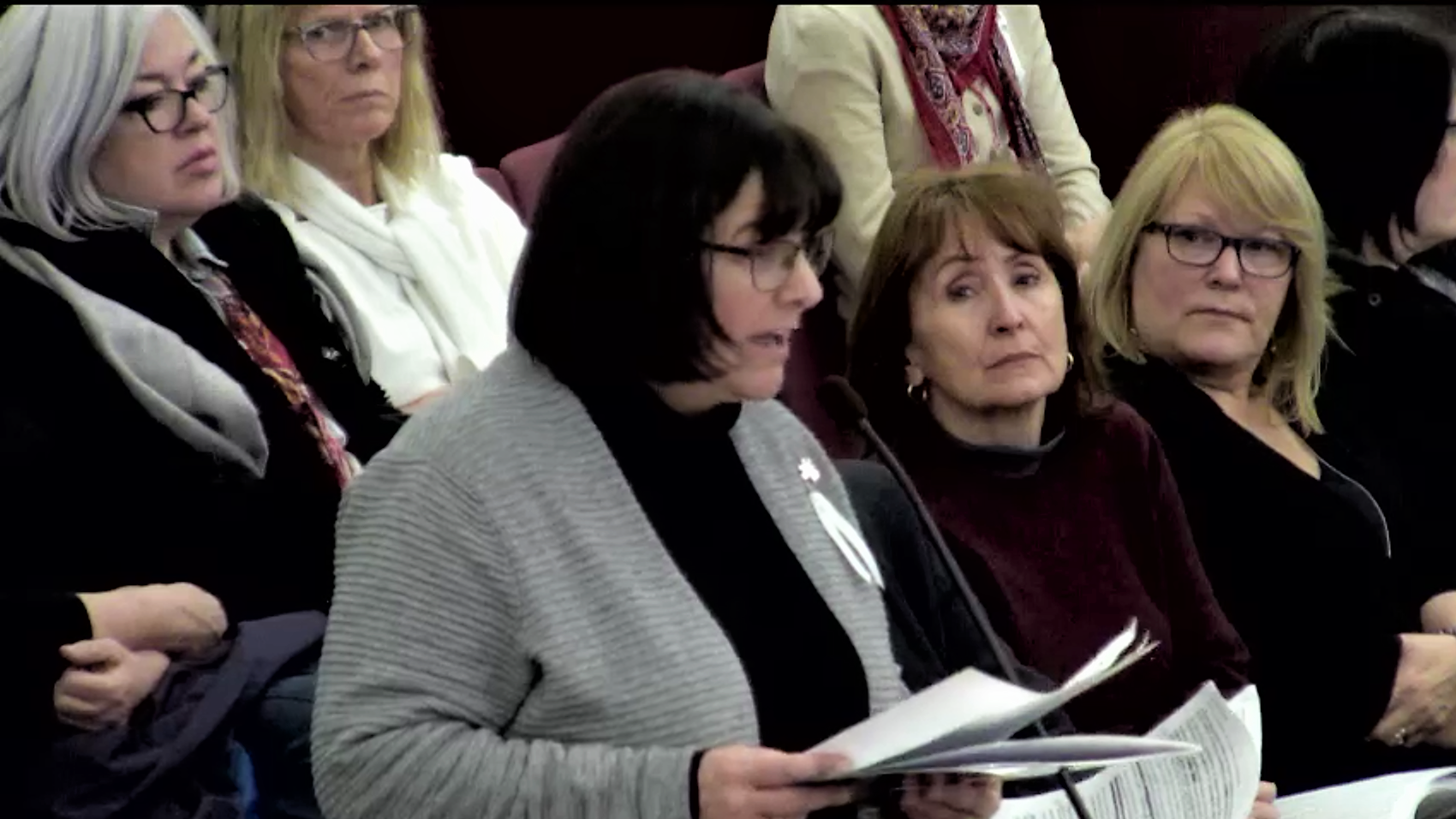 Thirty years to the minute after Marc Lepine told the men to leave after he entered the Polytechnique’s classroom, Nathalie Provost still remembers the moment when he screamed “You are all feminists, and I hate feminists!” before he shot her.

Provost, now 53 years old, was the last woman to ever speak to the killer when she told him that “...we’re not feminists. We’re just engineering students, and if you want to study at Polytechnique, you just have to apply et tu seras le bienvenue – you will be welcome!” That’s when he shot Provost four times before turning his rifle – a Ruger mini-14 semi-automatic with an extended magazine – on the other girls in the room. Although six of the nine girls in the class were shot down in the corner against the wall, Provost was one of the three girls (in the class) who managed to survive the killer’s initial rampage when the first shot tore through her eyebrow instead of her head.

“I’m glad that after 30 years, Montreal finally recognized that what happened in the Polytechnique was an anti-feminist attack,” said Provost. “Unlike other mass shooters, Marc Lépine made his motive crystal clear. He told me. He told us. He wrote it down. He did it because women bothered him, and if women bothered him, it’s because we are a society made of strong women.”

Thirty years to the day after the shooter shot and killed 14 innocent women, the city is finally coming to grips with what really happened during that late December afternoon.

Located within the park that’s dedicated to the memory of the 14 women who were the killer’s first victims, the city’s new panel no longer describes the event as a “tragedy” as much as it now explicitly mentions how the women were “...murdered during an anti-feminist attack” that occurred in the university’s ‘Polytechnique’ on the 6th of December, 1989.

During last Friday evening’s mountaintop memorial service, two students read out the victim’s names as 14 beacons began to light up the sky behind the choir that started to sing Yvon Deschamp’s “Aimons-Nous” followed by Leonard Cohen’s “Hallelujah” – the song that’s become the anthem of an entire generation. Remarks were delivered by Governor-General Julie Payette, Prime Minister Justin Trudeau, Premier Francois Legault, Mayor Valerie Plante and Genevieve Bergeron whose sister was one of the victims. Before he and his wife left their own flowers on the stone, Québec’s Premier François Legault expressed everyone’s sentiment when he poignantly said,”all of these women were robbed of their future simply because they were women.” 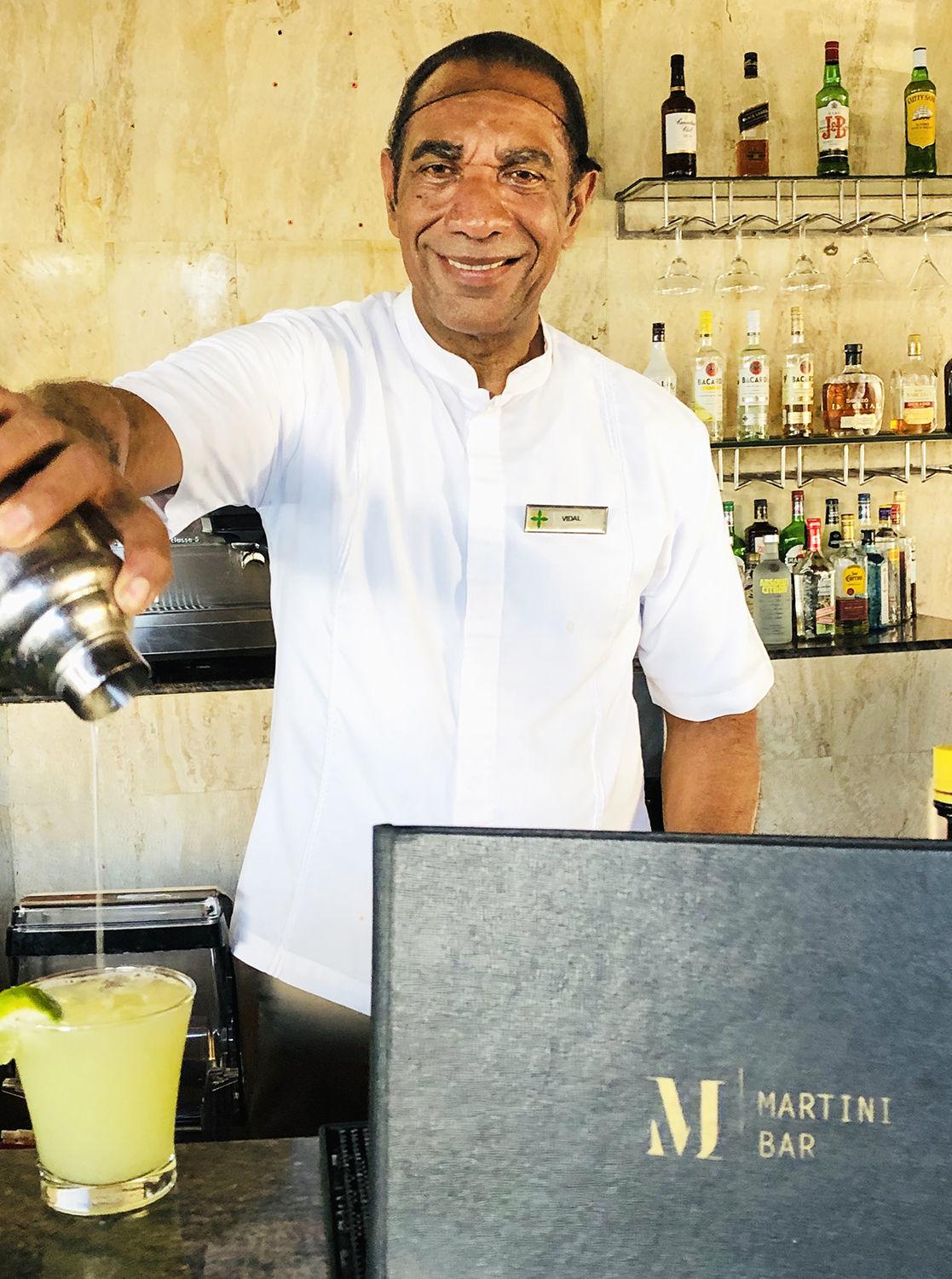 The Martini Bar at Excellence Punta Cana is where you’ll find Bartender Vidal shaking and stirring a variety of tropical cocktails. 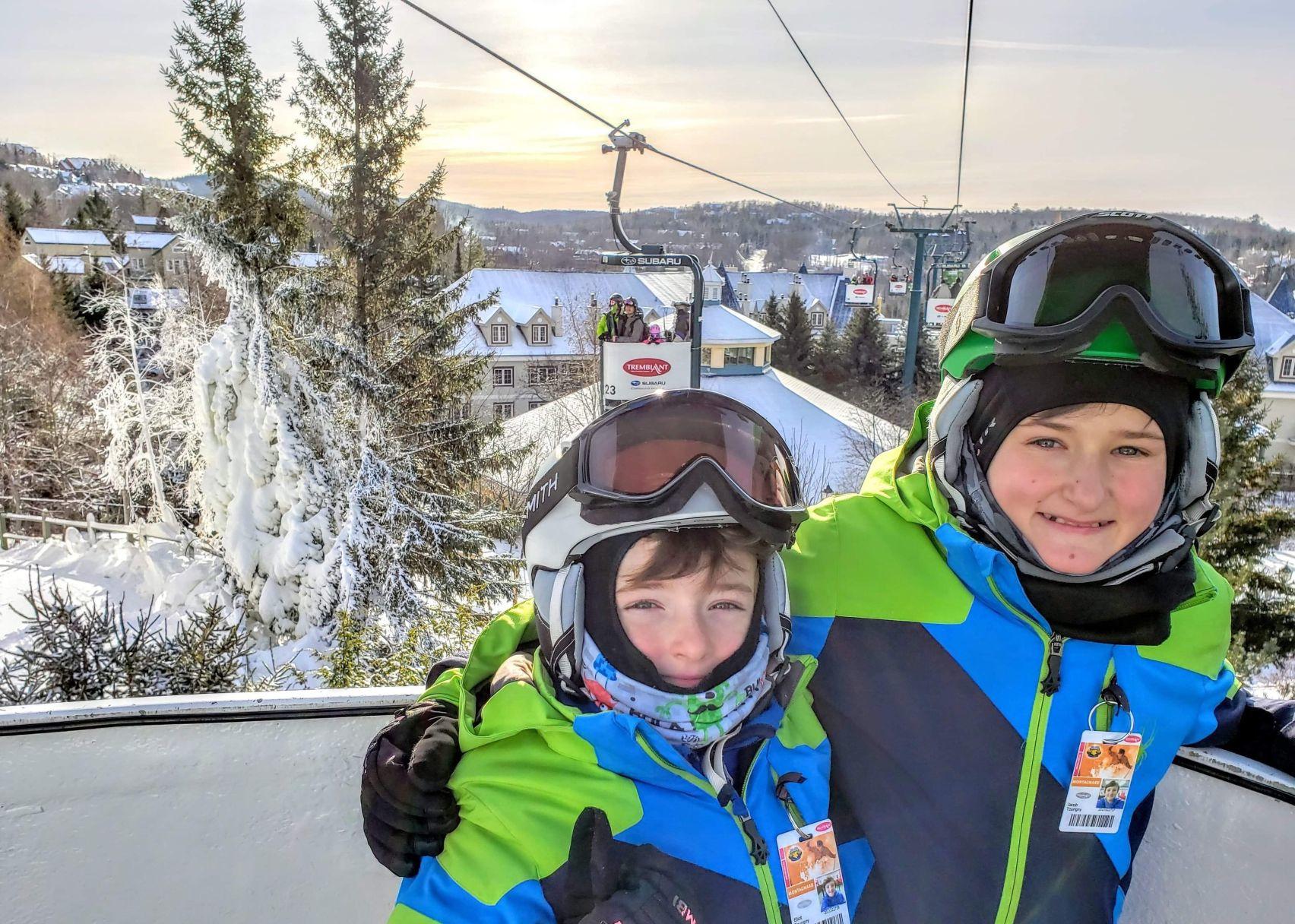 Nine-year-old younger Elliott (left) is raising money and participating in the event in memory of his big brother Jacob Tourigny along with other family and friends making up the Jacob Strong team. 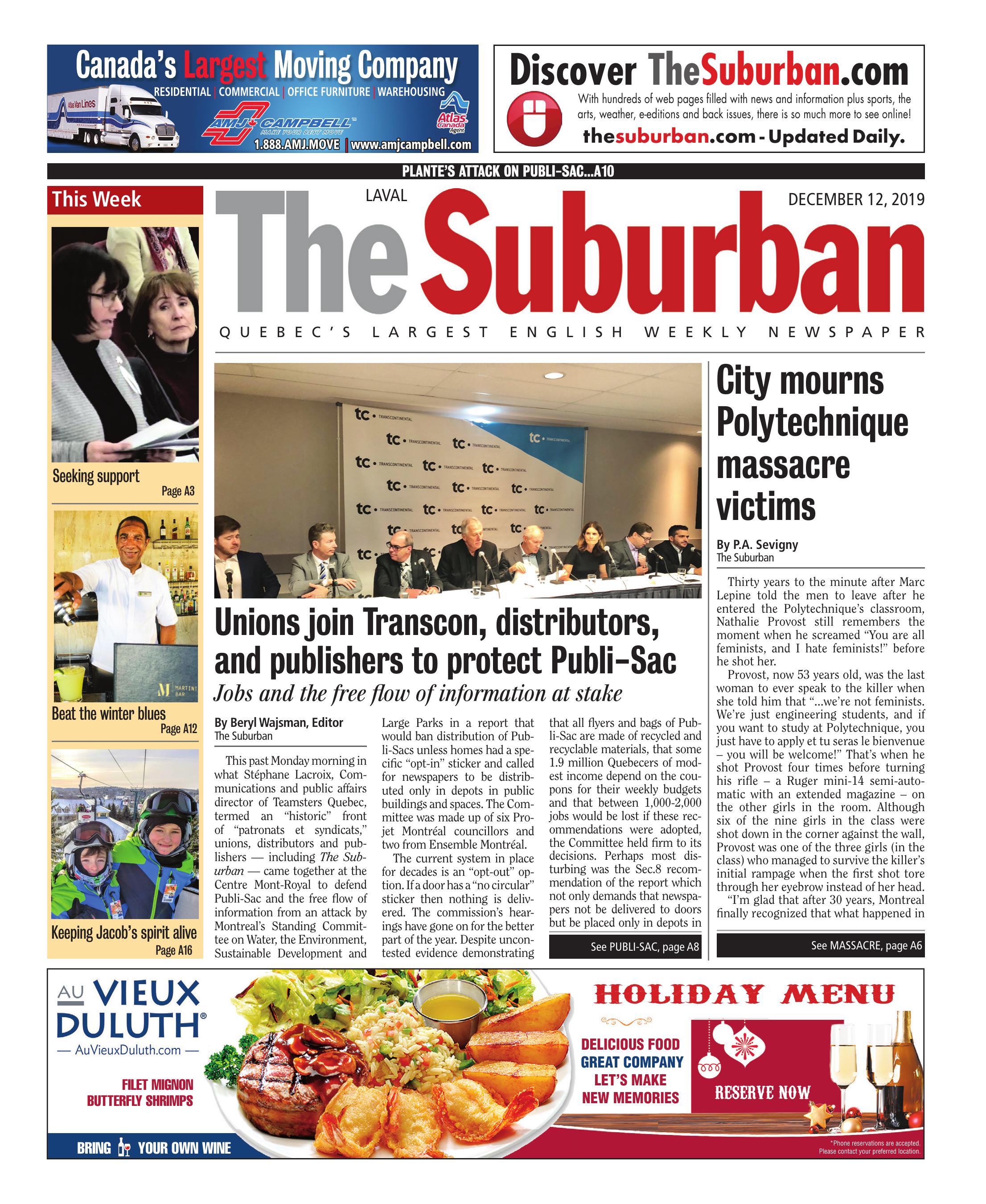