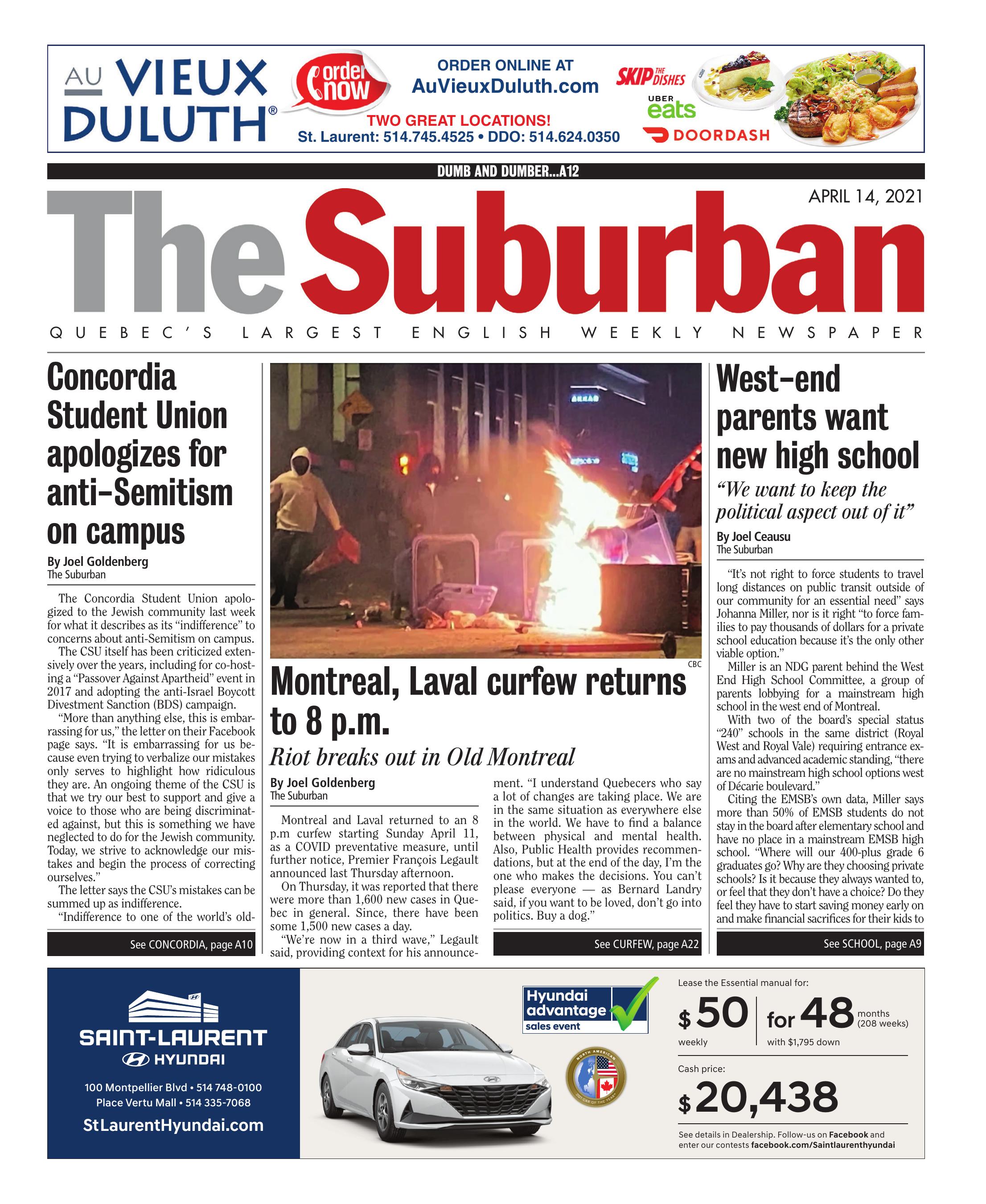 On Thursday, it was reported that there were more than 1,600 new cases in Quebec in general. Since, there have been some 1,500 new cases a day.

“We’re now in a third wave,” Legault said, providing context for his announcement. “I understand Quebecers who say a lot of changes are taking place. We are in the same situation as everywhere else in the world. We have to find a balance between physical and mental health. Also, Public Health provides recommendations, but at the end of the day, I’m the one who makes the decisions. You can’t please everyone — as Bernard Landry said, if you want to be loved, don’t go into politics. Buy a dog.”

Thousands of people reacted by holding a large protest in Old Montreal against the curfew Sunday night, calling for “freedom for the young.” The protest turned violent, with fires set and the windows of some businesses smashed. According to media reports, at least 108 tickets were handed out and at least seven people were arrested.

At last week’s press conference, the Premier also announced that the increase of cases in Quebec City, Lévis, Gatineau and Chaudière-Appalaches are such that the current restrictions, including the 8 p.m. curfew and the closure of non-essential businesses, will continue until April 18.

In densely populated Montreal and Laval, “the level of contagion is high, and we expect it to accelerate even more.

“That’s why we are taking a preventative measure, placing the curfew back to 8 p.m. to 5 a.m. If the situation explodes, it could lead to big problems and could be very concerning for hospitals.”

The Premier also said the Eastern Townships is under surveillance because of increases in that area as well.

Legault also praised the vaccination progress, adding that he was happy to see a waiting list for the Astra Zeneca vaccine, which was offered to those 55 and over in walk-in clinics starting April 8.

“The vaccines are our passport to freedom. The next few weeks are critical. What we’ve seen happening in many places, including Quebec City, can happen everywhere. We’re not safe from an explosion of cases, there is a danger. The variant is more contagious, more vicious. We’ve gone a good part of the way. We have to show solidarity.”

The Concordia Student Union apologized to the Jewish community last week for what it describes as its “indifference” to concerns about anti-Semitism on campus.

The CSU itself has been criticized extensively over the years, including for co-hosting a “Passover Against Apartheid” event in 2017 and adopting the anti-Israel Boycott Divestment Sanction (BDS) campaign.

“More than anything else, this is embarrassing for us,” the letter on their Facebook page says. “It is embarrassing for us because even trying to verbalize our mistakes only serves to highlight how ridiculous they are. An ongoing theme of the CSU is that we try our best to support and give a voice to those who are being discriminated against, but this is something we have neglected to do for the Jewish community. Today, we strive to acknowledge our mistakes and begin the process of correcting ourselves.”

The letter says the CSU’s mistakes can be summed up as indifference.

“This indifference has led to numerous opportunities being missed by the Concordia Student Union to help the Jewish community and to tackle issues of anti-Semitism on our campus head-on. By doing so, the CSU has assisted in fostering a campus culture where Jewish students are afraid to openly identify as Jewish. Instead of choosing to tuck their Star of David necklaces under their shirts out of fear of having insults hurled at them for things they do not control and are not responsible for. Our silence on these issues only benefits the oppressors and sets the belief that these acts are somehow justifiable which encourages the oppressors to continue this behavior.”

The CSU proposed measures over the next year “to help when acts of anti-Semitism occur and that we will give equal attention to this form of discrimination as any other:

• “The initialization of an anti-Semitism training for all incoming CSU Representatives to better understand this often understated form of discrimination within our campus.”

• “As many instances of anti-Semitism occur unpredictably on campus, the development of a Bystander Prevention Program (BPP) for the student body allowing them to identify and safely intervene and/or support Jewish students if they witness an act of anti-Semitism.”

• “A mandatory training to all CSU Club Executives so that they may be able to identify anti-Semitism and host events in which the Jewish community can feel safe and participate in.”

• “To work with Concordia to quickly remove the anti-Semitic graffiti/vandalism which is found around our campus and leads to an unwelcoming atmosphere for Jewish students on campus.”

“While we stood idly by in the past while acts of anti-Semitism occurred, we hope not to repeat those mistakes again and hope the Jewish community will give us another chance to support them in the future,” the letter concludes.

Her father, former Côte St. Luc councillor Glenn Nashen, pointed out that Nicole and her friend Harrison Kirshner “worked tirelessly on this issue...they brought in experts and community professionals to help educate their fellow councillors and after years, if not decades of anti-Semitism, they convinced the CSU to turn its back on years of shameful action.”

“It's not right that a public school system should be failing the very people they are supposed to be servicing."

“It’s not right to force students to travel long distances on public transit outside of our community for an essential need” says Johanna Miller, nor is it right “to force families to pay thousands of dollars for a private school education because it’s the only other viable option.”

Miller is an NDG parent behind the West End High School Committee, a group of parents lobbying for a mainstream high school in the west end of Montreal.

With two of the board’s special status “240” schools in the same district (Royal West and Royal Vale) requiring entrance exams and advanced academic standing, “there are no mainstream high school options west of Décarie boulevard.”

Citing the EMSB’s own data, Miller says more than 50% of EMSB students do not stay in the board after elementary school and have no place in a mainstream EMSB high school. “Where will our 400-plus grade 6 graduates go? Why are they choosing private schools? Is it because they always wanted to, or feel that they don’t have a choice? Do they feel they have to start saving money early on and make financial sacrifices for their kids to go to high school?”

Indeed, the committee website featured a striking message about the public school system, that there is zero “obligation from the EMSB to enroll EMSB students in a 240 status school.”

Westmount is the only viable alternative because Marymount is not a French immersion school. Commissioner Joe Lalla says improved transportation to Westmount could help local families, but it is at capacity and may soon start refusing students.

“I believe earlier attempts to create a mainstream school failed primarily because it was a top-down project” Miller told The Suburban, adding the effort “also brought in a city council and then the community without consulting parents,” one that ended up yet again as a special status proposition. That effort only garnered the interest of some 40 families.

Indeed, the town hall and information sessions for families even featured some local politicians trying to convince elite Montreal student athletes to change disciplines to attend the would-be school at Wagar. “This is coming from parents and we want to keep the political aspect out of it” Miller told The Suburban. “Especially with an election coming up. We’re not interested in those with personal political agendas.”

Asked if the west-end population has been written off by the EMSB as 240 or private school clientele, Lalla told The Suburban that the decision to go with a 240-status last time around was made by the organizing committee at the end of the process. He is hopeful though that the EMSB administration and council of commissioners will support any initiative from parents “which has merit, is realistic and affordable, and is backed up with proper research and factual information.”

As parent of a grade 4 student, Miller says “It’s not right that a public school system should be failing the very people they are supposed to be servicing. We are requesting a mainstream high school that is a school for everybody, not just kids who excel academically. The board should be taking this opportunity to say: ‘We are capable and are able to see this problem and look at how to handle this,’ and show the government if they want, why they should maintain school board status.”

For many, with three full French immersion elementary schools and dozens of families on waiting lists, the lack of local options is belying the board’s devotion to bilingualism. “Parents want their kids to be bilingual with French programs and the EMSB isn’t providing the services, so they are failing us there. If the West End didn’t have as many elementary schools as it does there would be no question.”

“If the board smartened up and did the homework that they were supposed to have done over a decade ago in terms of socio-demographics they would have seen this situation, this bubble coming. But they didn’t and they still don’t.”

Lalla says it’s untrue that there are no mainstream school options, just none nearby. “Unfortunately, some are far and some are close to capacity. What these parents want is a mainstream high school located west of Décarie. And I fully understand that.” He says while the previous attempt to open a school was initiated by the board and focused primarily on Côte St. Luc, the current movement is driven by parents from NDG, Montreal West, Cote St. Luc and Hampstead. “This latest request is well organized, determined and serious.”

After the previous failed attempt, Royal Vale High School made some changes to its program to make it easier for students to be admitted, such as offering a Flex French program (similar to Core English) and a number of concentrations. (French immersion was cancelled and replaced by Flex in Secondary 2 and 3 this year, a decision that parents were advised of 90 minutes before the start of the school year and attributed to pandemic guidelines.)

The committee will be gathering signatures until April 30 for a petition that will be presented to the board at the May 5 council meeting. Miller says she is hoping to see at least 1000 signatures.

For more information or to sign the petition, visit https://westendhighschool.wordpress.com