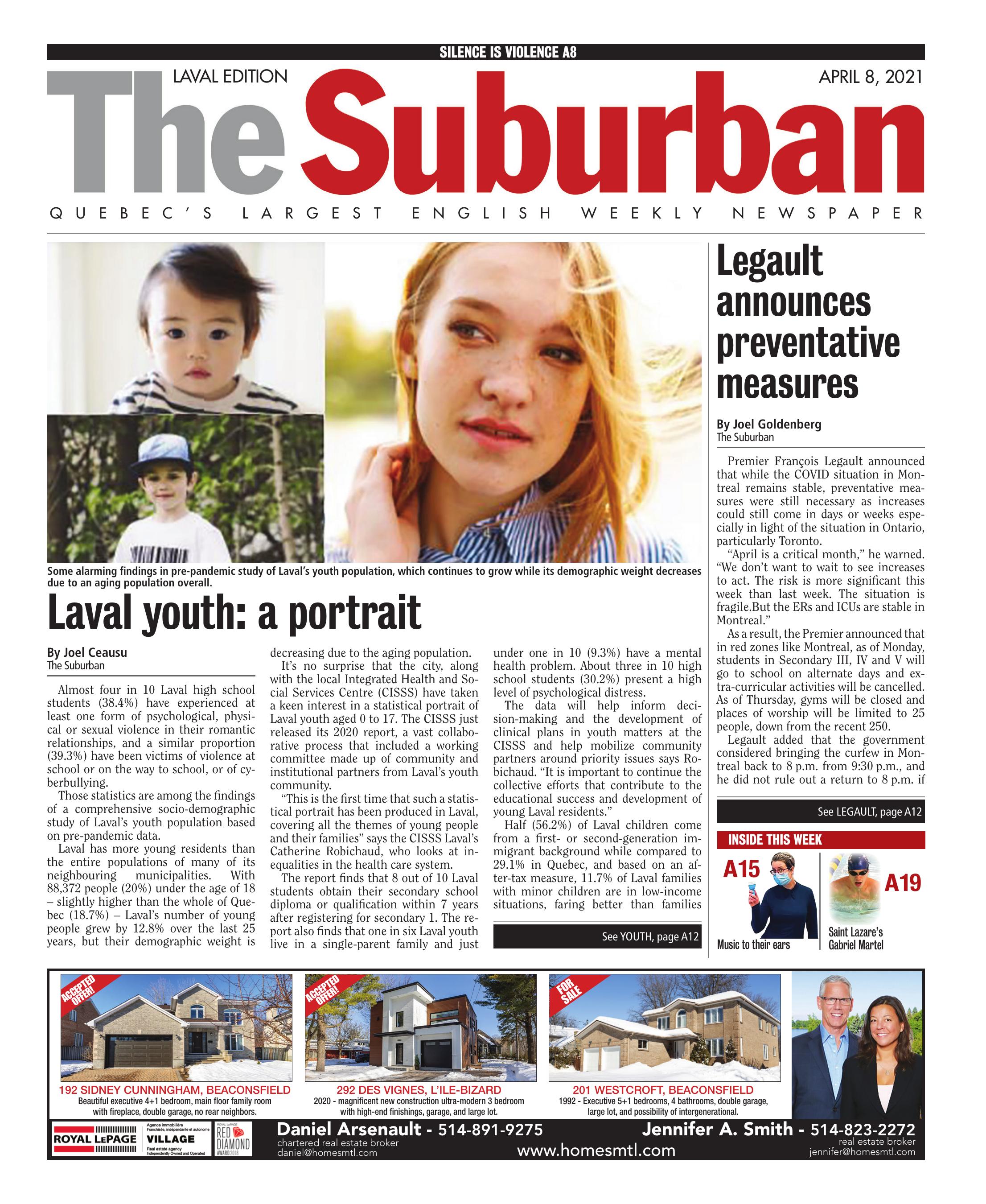 Some alarming findings in pre-pandemic study of Laval’s youth population, which continues to grow while its demographic weight decreases due to an aging population overall.

Almost four in 10 Laval high school students (38.4%) have experienced at least one form of psychological, physical or sexual violence in their romantic relationships, and a similar proportion (39.3%) have been victims of violence at school or on the way to school, or of cyberbullying.

Those statistics are among the findings of a comprehensive socio-demographic study of Laval’s youth population based on pre-pandemic data.

Laval has more young residents than the entire populations of many of its neighbouring municipalities. With 88,372 people (20%) under the age of 18 – slightly higher than the whole of Quebec (18.7%) – Laval’s number of young people grew by 12.8% over the last 25 years, but their demographic weight is decreasing due to the aging population.

It’s no surprise that the city, along with the local Integrated Health and Social Services Centre (CISSS) have taken a keen interest in a statistical portrait of Laval youth aged 0 to 17. The CISSS just released its 2020 report, a vast collaborative process that included a working committee made up of community and institutional partners from Laval’s youth community.

“This is the first time that such a statistical portrait has been produced in Laval, covering all the themes of young people and their families” says the CISSS Laval’s Catherine Robichaud, who looks at inequalities in the health care system.

The report finds that 8 out of 10 Laval students obtain their secondary school diploma or qualification within 7 years after registering for secondary 1. The report also finds that one in six Laval youth live in a single-parent family and just under one in 10 (9.3%) have a mental health problem. About three in 10 high school students (30.2%) present a high level of psychological distress.

The data will help inform decision-making and the development of clinical plans in youth matters at the CISSS and help mobilize community partners around priority issues says Robichaud. “It is important to continue the collective efforts that contribute to the educational success and development of young Laval residents.”

View the full report (in French only) at: https://www.lavalensante.com/accueil/nouvelles/news/portrait-sociodemographique-et-de-sante-2020-des-jeunes-lavallois-de-0-a-17-ans

Premier François Legault announced that while the COVID situation in Montreal remains stable, preventative measures were still necessary as increases could still come in days or weeks especially in light of the situation in Ontario, particularly Toronto.

“April is a critical month,” he warned. “We don’t want to wait to see increases to act. The risk is more significant this week than last week. The situation is fragile.But the ERs and ICUs are stable in Montreal.”

As a result, the Premier announced that in red zones like Montreal, as of Monday, students in Secondary III, IV and V will go to school on alternate days and extra-curricular activities will be cancelled. As of Thursday, gyms will be closed and places of worship will be limited to 25 people, down from the recent 250.

Legault added that the government considered bringing the curfew in Montreal back to 8 p.m. from 9:30 p.m., and he did not rule out a return to 8 p.m. if there is an increase in cases.

“There are many workers working later and people want to walk when it’s still light. The situation is still under control, but we’re keeping an eye on this from one hour to the next.”

Legault also warned that businesses which break the rules can be closed on the authority of provincial public health officials, especially in light of a single Quebec City gym in which COVID spread to upwards of 200 people.

Health Minister Christian Dubé announced that, starting Thursday, Quebecers 55 and over will be able to get the AstraZeneca vaccine at designated sites. The province had suspended its use for that age group because of possible blood clotting issues in Europe.

“All vaccinations are safe and efficient, the benefits outweigh the risks.”

Dubé also said the next priority group will be essential workers at high risk, and those with chronic illnesses.