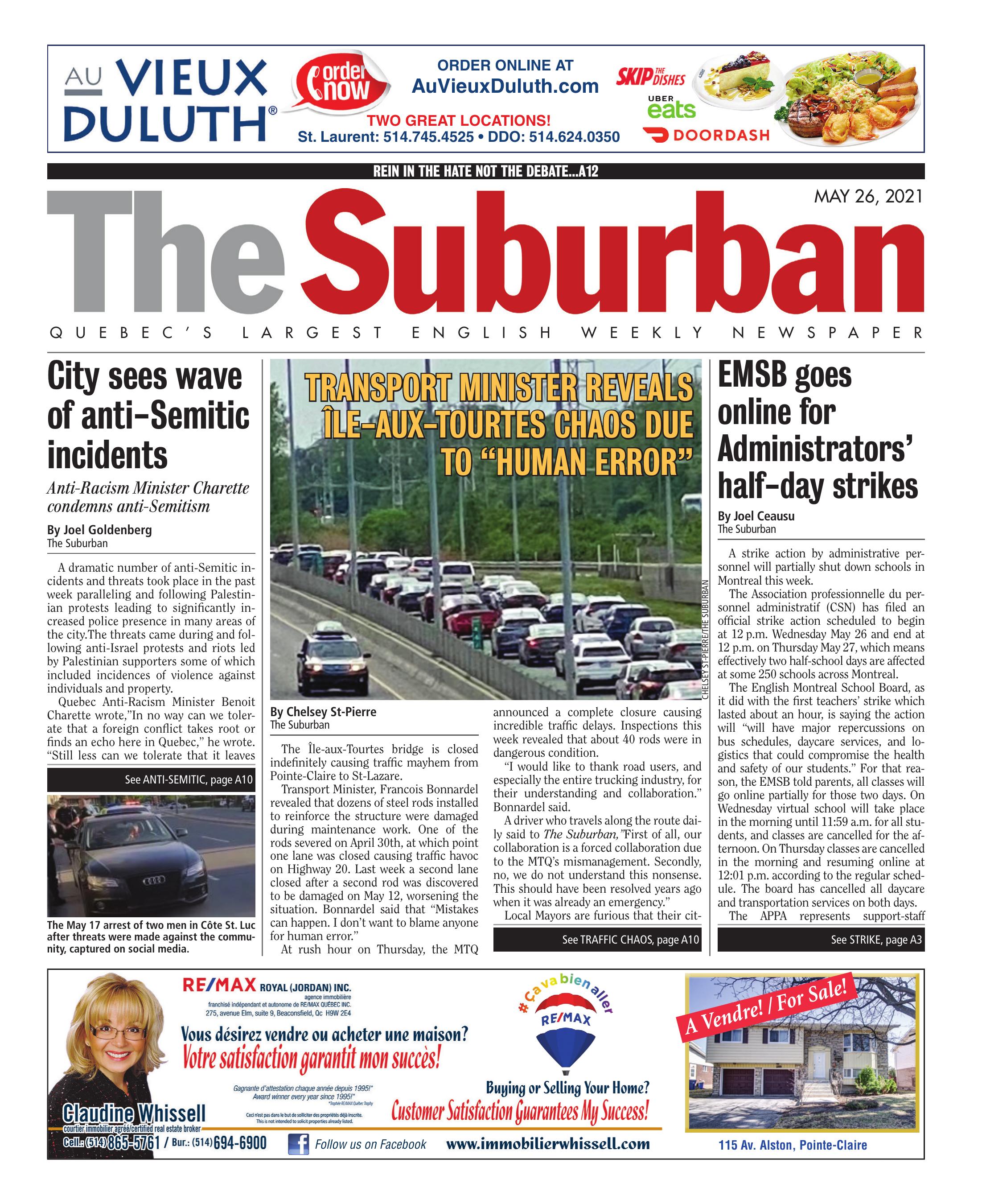 The Île-aux-Tourtes bridge is closed indefinitely causing traffic mayhem from Pointe-Claire to St-Lazare.

Transport Minister, Francois Bonnardel revealed that dozens of steel rods installed to reinforce the structure were damaged during maintenance work. One of the rods severed on April 30th, at which point one lane was closed causing traffic havoc on Highway 20. Last week a second lane closed after a second rod was discovered to be damaged on May 12, worsening the situation. Bonnardel said that “Mistakes can happen. I don’t want to blame anyone for human error.”

At rush hour on Thursday, the MTQ announced a complete closure causing incredible traffic delays. Inspections this week revealed that about 40 rods were in dangerous condition.

“I would like to thank road users, and especially the entire trucking industry, for their understanding and collaboration.” Bonnardel said.

A driver who travels along the route daily said to The Suburban,”First of all, our collaboration is a forced collaboration due to the MTQ’s mismanagement. Secondly, no, we do not understand this nonsense. This should have been resolved years ago when it was already an emergency.”

Local Mayors are furious that their cities are completely flooded with traffic for several hours a day as road users try to by-pass the backups. “Sainte-Anne-de-Bellevue will be completely paralyzed at rush hour,” Sainte-Anne-de-Bellevue Mayor, Paola Hawa said. “Even last week, when they closed a lane on the Île-aux-Tourtes bridge, our town was paralyzed from 2 p.m. to 9 p.m. “

“Not only do we have to live with a traffic lane that makes no sense, but in addition, it becomes a matter of safety for the whole region,” Île-Perrot Mayor, Pierre Séguin stated. “This historical error has gone far beyond reasonable bounds. In the 90s, plans were designed and commitments made by Quebec. More than 25 years later, we ask for new commitments. And this time around, I hope that together we will make sure that they are respected.”

The Île-aux-Tourtes bridge is an essential artery with an average of 85,000 vehicles per day between Saint-Charles Boulevard and Vaudreuil-Dorion. Île-aux-Tourtes traffic will now have to merge with Highway 20 and Highway 30. With the closure, traffic on Highway 20 West is heavy by 1 p.m. and by 2 p.m., it is completely congested, grinding to a halt by 2:30 p.m.

The May 17 arrest of two men in Côte St. Luc after threats were made against the community, captured on social media.

A dramatic number of anti-Semitic incidents and threats took place in the past week paralleling and following Palestinian protests leading to significantly increased police presence in many areas of the city.The threats came during and following anti-Israel protests and riots led by Palestinian supporters some of which included incidences of violence against individuals and property.

Quebec Anti-Racism Minister Benoit Charette wrote,”In no way can we tolerate that a foreign conflict takes root or finds an echo here in Quebec,” he wrote. “Still less can we tolerate that it leaves room for anti-Semitism. We can in Quebec express ourselves freely on the Israeli-Palestinian conflict, but at no time will violence, intimidation and hateful or racist remarks be tolerated.”

In Montreal, on May 15 pro-Palestinian demonstrators rushed a glass wall and destroyed it at Westmount Square. Many carried anti-Semitic signs comparing Israel to Nazi Germany and calling for “Palestine from the river (Jordan) to the sea (Mediterranean)” implying a genocide of Jews.

This was followed the next day by a peaceful pro-Israel rally at Dorchester Square where participants were chased and attacked with rocks, pepper spray, fists and even tear gas by nearby pro-Palestinians, forcing police to deploy their own tear gas against the anti-Israel rioters. The rioters rampaged through downtown streets for hours that day.

For the next week, the incidents and threats were directed at the Jewish community via actual acts and social media. They included:

• The arrest of two 19-year-old men in Côte St. Luc Monday May 17 for uttering anti-Semitic threats, which was captured on social media.

• In Hampstead on May 16, three teenagers yelled profanities at a passing car with an Israeli flag.

• An Israeli flag installed by Côte St. Luc on Cavendish Blvd. was stolen. Mayor Mitchell Brownstein said it would be replaced.

• Ysabella Hazan, a 21-year-old speaker at the May 16 pro-Israel rally, received numerous death threats and vile messages on social media and she said some posters tried to find out where she lives. One said “I hope you will die after being raped by your own kind Zionist terrorist bitch.”As the violence unfolded on May 16, Hazan posted on Facebook, “Montreal, you should be furious that Jews who gathered peacefully were hunted down. Jews were literally chased. As long as this is not condemned by the pro-Palestinian movement at large, anti-Semitism will only grow.”

• Posts on Facebook revealed screenshots of various social media threats against the Jewish community. One was “We’re going to Côte St. Luc where all the Jews are. [...] F--k Israel, bunch of Jews!” Another called on followers to replace the Isareli flags in CSL with Palestinian ones, and to beat up any Israelis “who get in the way.” Another pro-Palestinian claimed to have compiled a list of what he called “Zionist terrorists.”

Prime Minister Justin Trudeau, Mount Royal MP Anthony Housefather, Irwin Cotler of the Raoul Wallenberg Centre for Human Rights and others have posted their horrified reactions to the anti-Semitic events of May 16 and the aftermath in local communities. The SPVM stated that it is taking all these threats and posts seriously and have increased the number and frequency of police cruisers and patrols in Jewish areas. “Death threats and threats of violence against Jews on the street or online are horrendous and must be unequivocally condemned,” Federation CJA CEO Yair Szlak stated. He called on Jews to be vigilant but not to give in to fear.

A strike action by administrative personnel will partially shut down schools in Montreal this week.

The Association professionnelle du personnel administratif (CSN) has filed an official strike action scheduled to begin at 12 p.m. Wednesday May 26 and end at 12 p.m. on Thursday May 27, which means effectively two half-school days are affected at some 250 schools across Montreal.

The English Montreal School Board, as it did with the first teachers’ strike which lasted about an hour, is saying the action will “will have major repercussions on bus schedules, daycare services, and logistics that could compromise the health and safety of our students.” For that reason, the EMSB told parents, all classes will go online partially for those two days. On Wednesday virtual school will take place in the morning until 11:59 a.m. for all students, and classes are cancelled for the afternoon. On Thursday classes are cancelled in the morning and resuming online at 12:01 p.m. according to the regular schedule. The board has cancelled all daycare and transportation services on both days.

The APPA represents support-staff employees from the EMSB and the Centre de services scolaire de Montréal, including administrative personnel, technicians, special education and daycare personnel, and student supervisors. Expressing dissatisfaction with collective bargaining negotiations the union obtained a 93.5% strike mandate from its members.

At the CSSDM, for elementary students, classes on both days are suspended for the full day and there will be no distance learning. However, teachers will be giving students work they can do independently to ensure continuity with what they’re doing in class, and students can reach their teacher via Teams or by email during the half day when there is no strike.

alternating presence of school groups continues, which means students who are normally in class on Wednesday morning or Thursday afternoon will be in those classes for those periods. If they are in virtual learning their situation does not change.

“Schools and centres remain functional because of us” says a union statement regarding the ongoing negotiations with public sector workers, saying a settlement is possible “if the government accepts to treat all public sector workers equitably, especially considering the role of school support staff since the beginning of the pandemic.”