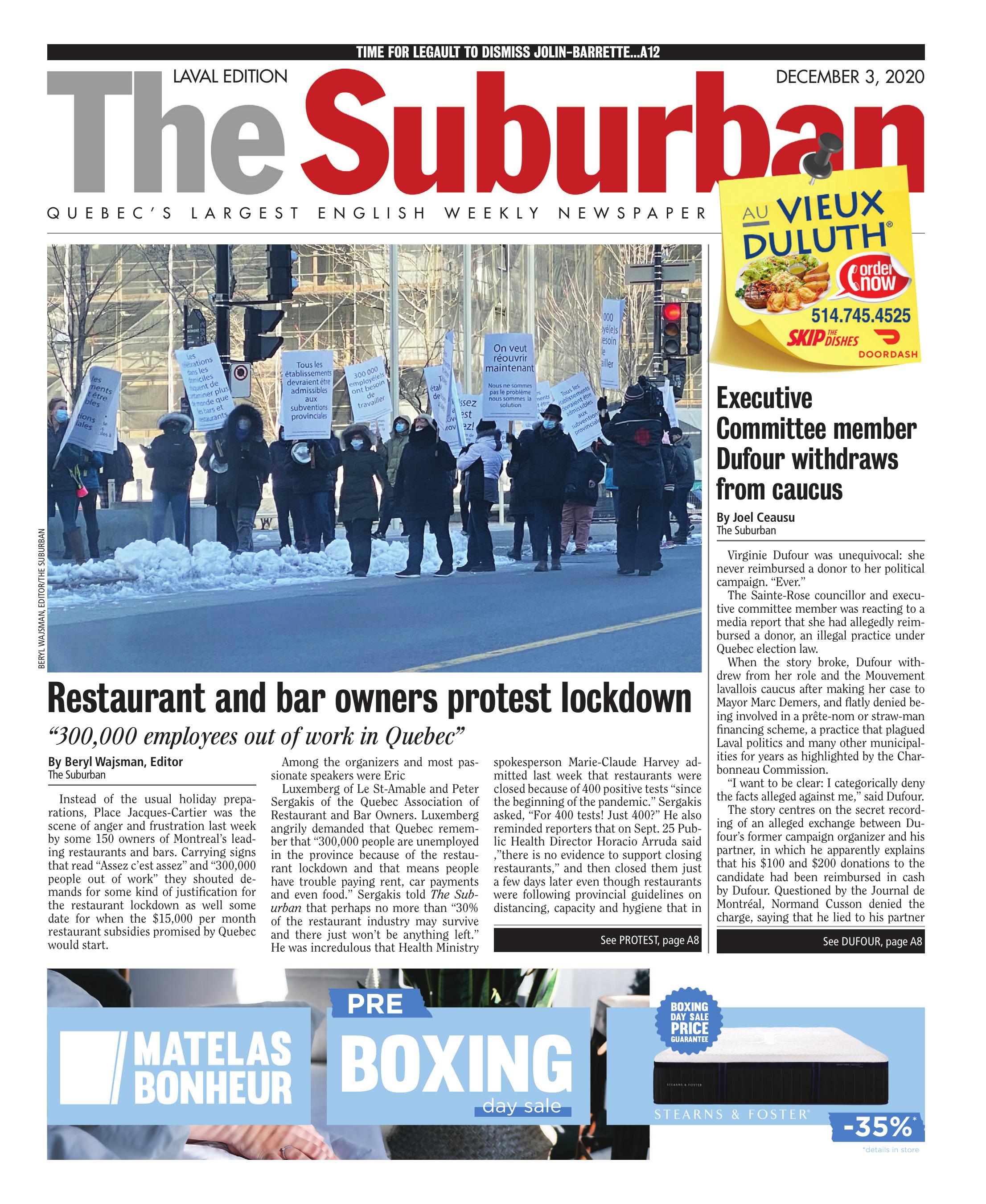 Instead of the usual holiday preparations, Place Jacques-Cartier was the scene of anger and frustration last week by some 150 owners of Montreal’s leading restaurants and bars. Carrying signs that read “Assez c’est assez” and “300,000 people out of work” they shouted demands for some kind of justification for the restaurant lockdown as well some date for when the $15,000 per month restaurant subsidies promised by Quebec would start.

Among the organizers and most passionate speakers were Eric

Luxemberg of Le St-Amable and Peter Sergakis of the Quebec Association of Restaurant and Bar Owners. Luxemberg angrily demanded that Quebec remember that “300,000 people are unemployed in the province because of the restaurant lockdown and that means people have trouble paying rent, car payments and even food.” Sergakis told The Suburban that perhaps no more than “30% of the restaurant industry may survive and there just won’t be anything left.” He was incredulous that Health Ministry spokesperson Marie-Claude Harvey admitted last week that restaurants were closed because of 400 positive tests “since the beginning of the pandemic.” Sergakis asked, “For 400 tests! Just 400?” He also reminded reporters that on Sept. 25 Public Health Director Horacio Arruda said ,”there is no evidence to support closing restaurants,” and then closed them just a few days later even though restaurants were following provincial guidelines on distancing, capacity and hygiene that in some cases cost restaurants tens of thousands of dollars.

Many protestors brought pots and pans and carrying the signs marched to City Hall before dispersing. Among the participants were members of the Union des tenanciers de Bar du Québec and the Corporation des propriétaires de bars, brasseries et tavernes du Québec, whose president Renaud Poulin demanded that the Quebec government ease eligibility requirements for aid, which at the moment, he said, preclude establishments operating slot machines and featuring nude dancing.

Speaking at a press conference held soon after the protest ended, Premier Legault addressed the delay in aid saying that he and Pierre Fitzgibbon, the province’s minister of economy and innovations, are aware of the issue and are “pushing” to solve it. “But, I also know that some restaurants, for all kinds of reasons, don’t want to present invoices and proof of the rent they pay. We manage the money of Quebecers, so we cannot pay without having any proof.”

Dufour on DGEQ investigation: "This is what I wanted from the very beginning since I truly believe this will help clear my name."

Virginie Dufour was unequivocal: she never reimbursed a donor to her political campaign. “Ever.”

The Sainte-Rose councillor and executive committee member was reacting to a media report that she had allegedly reimbursed a donor, an illegal practice under Quebec election law.

When the story broke, Dufour withdrew from her role and the Mouvement lavallois caucus after making her case to Mayor Marc Demers, and flatly denied being involved in a prête-nom or straw-man financing scheme, a practice that plagued Laval politics and many other municipalities for years as highlighted by the Charbonneau Commission.

“I want to be clear: I categorically deny the facts alleged against me,” said Dufour.

The story centres on the secret recording of an alleged exchange between Dufour’s former campaign organizer and his partner, in which he apparently explains that his $100 and $200 donations to the candidate had been reimbursed in cash by Dufour. Questioned by the Journal de Montréal, Normand Cusson denied the charge, saying that he lied to his partner to assuage her concerns that he was supporting Dufour financially.

Municipal political donations are capped at $100 per elector in money goods or services per calendar year, with an additional $100 during an election year.

In a video posted to Facebook, Dufour, a politician who has been lauded for her abilities, acumen and leadership by friends and foes alike, said “I was floored by this story. I never reimbursed anyone; I never participated in any such schemes. It goes against all my principles and everything I’ve fought so hard for. I won’t allow my reputation to be tarnished by a couple’s chicanerie, or some revenge story.”

In prête-nom schemes, contributors donate to a candidate or party and then are reimbursed the amount donated to channel more cash into a campaign than is permitted by law. Apart from the stain on a candidate’s or party’s reputation at a crucial time, violators face serious sanctions: fines from $5,000 up to $20,000, loss of rights to vote or stand or election; and to enter into a public contract, for both the donor and those reimbursing them.

All donors must sign a declaration that their contribution is made from their own assets, voluntarily, without compensation or for a consideration, and that it was not and will not be reimbursed in any way.

“The allegations against Virginie Dufour are serious and, if true, unacceptable,” said Laval Mayor Marc Demers. “Ms. Dufour reiterated to me her commitment to the values of integrity and ethics that are essential to our administration.”

Dufour said she has asked Quebec’s Director General of Elections (DGEQ) and Laval’s Office of Integrity and Ethics (BIELT) police unit to investigate the allegations. “I have a strong work ethic and I have absolutely nothing to hide. That is why I myself have taken the lead in calling for an investigation by the relevant authorities. Of course I offer them my full cooperation.”

The widely disseminated clip consists almost exclusively of Dumas speaking in a restaurant, condemning some of own his colleagues and advising his opponent on how to deal with the ruling administration. Dumas never responded to requests for comment, but a city hall political staffer insisted the recording was fake and its use illegal, suggesting someone employed audio equipment to record, mix and alter the dialogue.