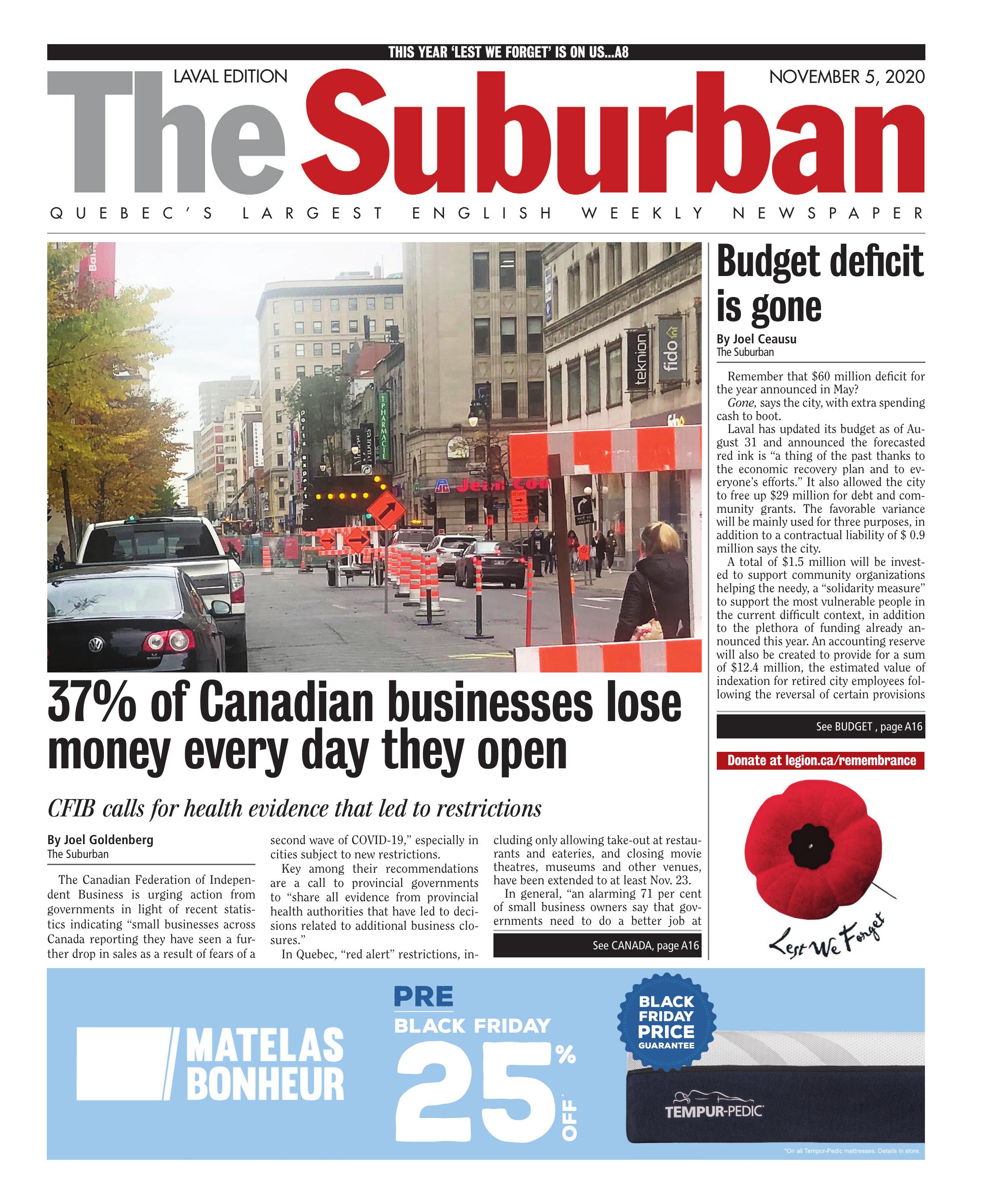 The Canadian Federation of Independent Business is urging action from governments in light of recent statistics indicating “small businesses across Canada reporting they have seen a further drop in sales as a result of fears of a second wave of COVID-19,” especially in cities subject to new restrictions.

Key among their recommendations are a call to provincial governments to “share all evidence from provincial health authorities that have led to decisions related to additional business closures.”

In Quebec, “red alert” restrictions, including only allowing take-out at restaurants and eateries, and closing movie theatres, museums and other venues, have been extended to at least Nov. 23.

In general, “an alarming 71 per cent of small business owners say that governments need to do a better job at reporting COVID-19 related health statistics in order to support consumer confidence,” stated CFIB president Dan Kelly. “A growing number of small firms are feeling punished by provincial governments despite taking major steps to protect the health and well-being of their customers and employees. This needs to change.”

Kelly added that, in general, “small businesses still haven’t recovered from the first wave of COVID-19 lockdown measures. In fact, 37 per cent of all businesses across Canada report they are actually losing money every day they are open. The new round of restrictions in several regions are already proving to be devastating to them, especially as new supports from government remain in the development stage.”

For Montreal, according to the CFIB survey, 57 percent of businesses “have seen a further drop in sales as a result/fear of the ‘second wave;’ and 45 per cent of businesses are “losing money right now for every day they are open.”

The CFIB is urging governments to:

• “Provide a top-up to 90 per cent for the Canada Emergency Wage Subsidy (CEWS) for firms subject to additional COVID-19 related closures as is planned for the rent subsidy.”

• “Immediately deliver on promised expansion of the Canada Emergency Business Account (CEBA) loan program by $20,000 with an extra $10,000 forgivable portion.”

• “Immediately deliver on the new Canada Emergency Rent Subsidy (CERS), ensuring all firms subject to additional COVID-19 related full or partial closures can access the top-up to 90 per cent.”

• “Ensure new businesses started in 2020 can access all the major government support programs, including CEBA, CEWS and CERS.”

• “Deliver retroactive rent support to those firms whose landlords refused to participate in the Canada Emergency Commercial Rent Assistance (CECRA) from April to September.”

Cuts, savings, rebates, and redemptions helped push the city from red to black this year despite Covid, says the administration

Remember that $60 million deficit for the year announced in May?

Gone, says the city, with extra spending cash to boot.

Laval has updated its budget as of August 31 and announced the forecasted red ink is “a thing of the past thanks to the economic recovery plan and to everyone’s efforts.” It also allowed the city to free up $29 million for debt and community grants. The favorable variance will be mainly used for three purposes, in addition to a contractual liability of $ 0.9 million says the city.

A total of $1.5 million will be invested to support community organizations helping the needy, a “solidarity measure” to support the most vulnerable people in the current difficult context, in addition to the plethora of funding already announced this year. An accounting reserve will also be created to provide for a sum of $12.4 million, the estimated value of indexation for retired city employees following the reversal of certain provisions of Law 15. That judgment is currently under appeal, but the city intends to prepare in case it is upheld.

Finally, the city’s pension plan notes, representing approximately $31 million, will be redeemed early, for a total of $14.2 million, due to Bill 54 adopted in the early 2000s. Cities have a certain vulnerability on the pension system and by acting now to guarantee its financial health, the city is protecting itself against possible stock market risks since it is jointly responsible for deficits.

Laval Mayor Marc Demers lauded his administration’s move: “I am very proud to take another step in this direction by reserving the sums required for the possible settlement of the pension plans. I could not have imagined leaving such a financial burden on generations to come. Acting today is a question of fairness.”

Hot of the announcement of a municipal tax freeze after 7 years, Demers also signalled good news for community groups as the city closes in on an election year. “I know that 2020 is a particularly difficult year for many Laval residents. In such circumstances, it was essential that the City give an extra boost to its less fortunate citizens. I am therefore very proud to announce that this sound financial management will allow us to significantly increase the funding of several community organizations helping the most disadvantaged.

Compared to the initial budget, the pandemic caused a drop of $21.5 million, mainly due to the reduction in fines and penalties ($6 million), lower than expected returns on investments ($5.6 million) and bad debts ($3.1 million).

The rise in black ink however, is explained by a boost in transfer (welcome) taxes – $12 million more than expected; cuts to expenses and salaries ($23.9 million); a $3.2 million rebate from the ARTM instead of $19 million to be paid; and the settlement of the Commodore development lawsuit against the city, freeing up $10 million in funds placed pending the settlement.

With the update, Demers declared Laval is back on the road to financial health. “In the midst of a global pandemic, I think we can speak of an achievement.”