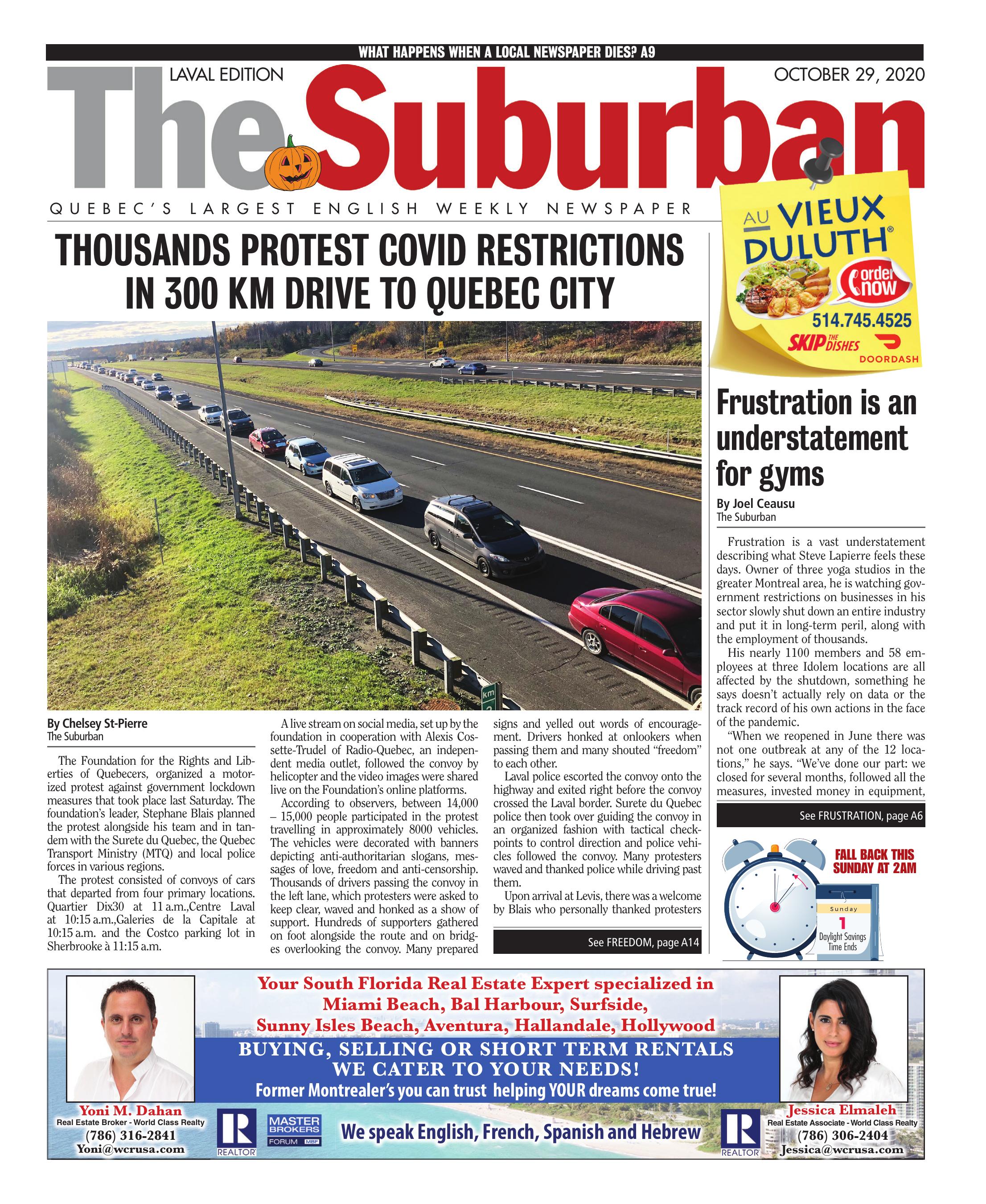 The Foundation for the Rights and Liberties of Quebecers, organized a motorized protest against government lockdown measures that took place last Saturday. The foundation’s leader, Stephane Blais planned the protest alongside his team and in tandem with the Surete du Quebec, the Quebec Transport Ministry (MTQ) and local police forces in various regions.

The protest consisted of convoys of cars that departed from four primary locations.Quartier Dix30 at 11 a.m.,Centre Laval at 10:15 a.m.,Galeries de la Capitale at 10:15 a.m. and the Costco parking lot in Sherbrooke à 11:15 a.m.

A live stream on social media, set up by the foundation in cooperation with Alexis Cossette-Trudel of Radio-Quebec, an independent media outlet, followed the convoy by helicopter and the video images were shared live on the Foundation’s online platforms.

According to observers, between 14,000 – 15,000 people participated in the protest travelling in approximately 8000 vehicles. The vehicles were decorated with banners depicting anti-authoritarian slogans, messages of love, freedom and anti-censorship. Thousands of drivers passing the convoy in the left lane, which protesters were asked to keep clear, waved and honked as a show of support. Hundreds of supporters gathered on foot alongside the route and on bridges overlooking the convoy. Many prepared signs and yelled out words of encouragement. Drivers honked at onlookers when passing them and many shouted “freedom” to each other.

Laval police escorted the convoy onto the highway and exited right before the convoy crossed the Laval border. Surete du Quebec police then took over guiding the convoy in an organized fashion with tactical checkpoints to control direction and police vehicles followed the convoy. Many protesters waved and thanked police while driving past them.

Upon arrival at Levis, there was a welcome by Blais who personally thanked protesters passing over the bridge where he stood with a crowd of approximately twenty other people waving at the drivers as they passed by them.

The Foundation has raised over half a million dollars to date for the purpose of suing federal and provincial governments for alleged damages caused by lockdown measures. Toronto lawyer, Rocco Galati has taken the lead in the legal challenges by way of injunctions, claiming that the government restrictions are in violation of the Canadian constitution and Blais intends to take a similar approach with a legal team here in Quebec.

City_news
featured
Frustration is an understatement

When reopened, studios implemented increased hygiene measures, smaller classes and new schedules, and not one outbreak reported in 12 locations.

Frustration is a vast understatement describing what Steve Lapierre feels these days. Owner of three yoga studios in the greater Montreal area, he is watching government restrictions on businesses in his sector slowly shut down an entire industry and put it in long-term peril, along with the employment of thousands.

His nearly 1100 members and 58 employees at three Idolem locations are all affected by the shutdown, something he says doesn’t actually rely on data or the track record of his own actions in the face of the pandemic.

“When we reopened in June there was not one outbreak at any of the 12 locations,” he says. “We’ve done our part: we closed for several months, followed all the measures, invested money in equipment, special products, plexiglass, new sanitizing measures and materials. For an industry that does not have a big profit margin that makes a huge difference,” he says, noting with irony that while his studio is shut down, anyone can easily buy similar products at a big box store where you can linger for hours shopping, brushing up against people, touching multiple items “and then stand in line for a cheap hotdog on your way out.”

He’s one of a growing group of business operators protesting the government’s latest shutdown order and planning a one-day opening this Thursday – at least symbolically, for a show of much needed solidarity. Unfortunately says Lapierre, the government’s decree calls for fines not only for defiant business owners but their clients as well. “I can live with the fact that I get a fine, but maybe some of my clients will show up unaware. I may open but not for yogis, so think of us as a mini-mall where customers are welcome to visit our boutique to purchase a towel or a mat.”

That resonates with Louis, manager of a small cross-training centre in Rosemont. “One of the worse problems is our message as businesspersons who run a payroll is lost in the noise,” he told The Suburban. “If I say the government is doing it all wrong, people think I’m crazy because the loudest voices are the conspiracy wannabes making us all look stupid.”

He says his 11 employees and hundreds of clients depend on him, and his voice “is drowned out because of guys like (Alexis Cossette) Trudel”- (a Quebec vlogger who has been ejected from Facebook and YouTube for spreading conspiracy theories, including QAnon and its pedophile-satanic-cannibal ‘deep-state’ narrative,) “so everybody lumps us together with this con.”

“In the meantime, I can walk into Canadian Tire and buy frying pans, Halloween decorations and hang around with 50 people. But I can’t do burpees with four clients in my space with the doors open. You have to love that!”

Indeed, if even a Montreal borough can invite residents to play ping pong, pickle ball, badminton and other activities in its sports centre, and it’s okay for anyone to just walk in and linger in a big box store and buy non-essentials, why can’t six healthy people safely engage in a fitness and wellness pursuit?

“Because we are easy targets,” says Lapierre. “At any moment one of my landlords can pull the plug on me, and at any moment the bank can pull the plug on me. It’s easy for those in government with cushy jobs and great salaries to sit and say ‘well we have to make difficult decisions’ on our backs. Why are the most vulnerable businesses being targeted with these restrictions? Why not go after the bigger players who have deep pockets and can afford to be shut down for a few months? They’ll still be there.”

Lapierre says years of toiling and sacrifices to launch and maintain a small business doesn’t matter anymore. “Show us the science: Where are the outbreaks in the gyms and yoga studios? Why not close down shopping centres and large stores? We say go ahead we’ll shut down but show us one study that shows we are at the highest risks, that it’s actually happening.”

He says “(Premier François) Legault and (Public health director Dr. Horacio) Arruda and all ministers should take a massive pay cut and contribute to a fund to help” those whose livelihoods are affected by their decisions, which he calls “a big improvisation” and just “to look like they are doing something.”

“We’re not Apple. We don’t have billions and can charge whatever we want. What should I do? I’ve already poured more money into trying to stay alive. Should I risk it all? Everything, all my security for my children to buy a little more time until the government decides something else?”

He predicts a yoyo season. “They are making us make these sacrifices now to offer the population a nice Christmas and then when we’re back at it when flu season hits. And we won’t be going by how many infections but by what the medical system can support.”

He says some 17 yoga studios have shut down in the Montreal area, and for those that remain open, along with gyms that have not succumbed, it won’t be easy. “We will be opening with much more debt, more costs, fewer clients with fewer resources,” adding that people have also spent a year being told the activity is dangerous and high risk.

“Legault is going to fine me?” laughs Louis. “Good. Put that on my creditor list when I call the trustees!”