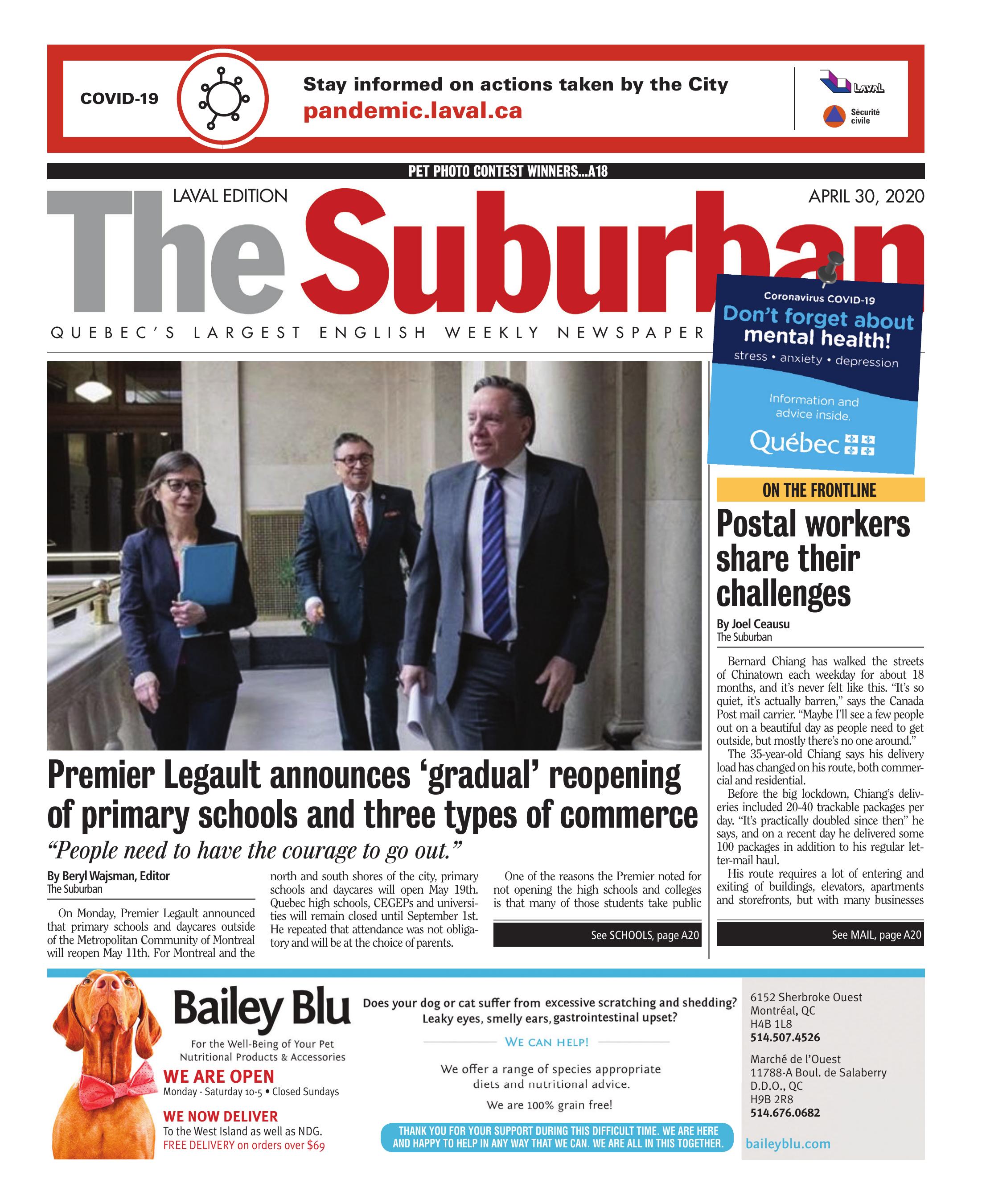 On Monday, Premier Legault announced that primary schools and daycares outside of the Metropolitan Community of Montreal will reopen May 11th. For Montreal and the north and south shores of the city, primary schools and daycares will open May 19th. Quebec high schools, CEGEPs and universities will remain closed until September 1st. He repeated that attendance was not obligatory and will be at the choice of parents.

One of the reasons the Premier noted for not opening the high schools and colleges is that many of those students take public transport and it would be difficult to maintain social distance guidelines in public transit. There will be a limit of 15 students per class Quebec is preparing a broader plan to offer instruction out of the classroom to high school students.

The Premier stressed that this move was important for the welfare of the students particularly for those with learning difficulties. He said that they cannot be left without instruction for six months. They could fall behind too drastically. Another reason to return primary school students is that medical authorities agree that the risks for those that young are “minimal.” The Premier added, “Life has to go on. The medical and hospital situations have stabilized. Children need social interaction. And our society needs to develop some natural immunity.”

The Premier concluded with the following caution, “If the situation continues as stable as today — and only if — then the schools will be open. School attendance will not be obligatory. If the numbers change in the next few days we will adjust the schedule. Our plan is always governed by prudence, prudence and more prudence.” Mr. Legault also said people must have the courage to start going out while maintaining social distance guidelines.

On Tuesday, accompanied by Economy Minister Pierre Fitzgibbon, the Premier also announced that three areas of commerce will be the first to reopen over the next few weeks. Any retail business with a door that opens to the street, construction and manufacturing. Shopping centers and office towers will stay closed.The businesses that open must respect social distancing measures.

Retailers everywhere in Quebec except for the Greater Montreal area can open May 4th. In the GMA they can open May 11. Manufacturers in all areas of Quebec including Montreal can open on May 11. Manufacturers who have 50 employees or less can operate at full capacity. Manufacturers who have more than 50 employees can have 50 employees plus half of the balance.If all goes well, Minister Fitzgibbon said, then manufacturers can go to full employee capacity on May 25. Construction can resume at full employee capacity on May 11. He also announced that for the full month of May all large stores will remain closed on Sundays. Local groceries, pharmacies and gas stations will be open.

Chiang, sporting a mask designed by his wife Melissa Nault of Montreal’s Adopt a Fabric project, says he feels pretty safe out there.

Bernard Chiang has walked the streets of Chinatown each weekday for about 18 months, and it’s never felt like this. “It’s so quiet, it’s actually barren,” says the Canada Post mail carrier. “Maybe I’ll see a few people out on a beautiful day as people need to get outside, but mostly there’s no one around.”

The 35-year-old Chiang says his delivery load has changed on his route, both commercial and residential.

Before the big lockdown, Chiang’s deliveries included 20-40 trackable packages per day. “It’s practically doubled since then” he says, and on a recent day he delivered some 100 packages in addition to his regular letter-mail haul.

His route requires a lot of entering and exiting of buildings, elevators, apartments and storefronts, but with many businesses and offices shuttered he doesn’t feel particularly concerned about exposure. “The pressure to maintain social distancing has not been there, as there are so few people around it makes it easy for me to move around.” Fewer people means dodging fewer people on sidewalks and fewer to interact with, even on a weekday morning at de la Gauchetière and Saint-Laurent, with no traffic and hardly anybody in site.

His routine has changed with new protocols in place from start to finish, carrying sanitizers and liquid soaps and staggering of schedules to minimize occupancy of sorting stations.

People he does encounter, “well they seem a lot friendlier these days. They are appreciative to see someone.” He says there are more people who seem to be disconnected, and more likely to engage when they see somebody. “Human beings are meant to be social and the fact that I can talk to people, it helps keep our minds busy and maybe helps us forget about the more dire situation out there.”

For his part, Russell Nault is feeling his unofficial role as eyes and ears of the neighbourhood a little more these days. The mail carrier knows every nook and cranny of his Ville Émard and Côte-Saint-Paul route, and knows when something’s amiss.

“I know my area, I know people my people” he told The Suburban, adding, “my customers have been exceptional. I ring the bell, they’ll knock on the window and give me a wave.”

Nault says most people on his route are respecting stay-at-home instructions, save for a few older folks, including one older lady well into her 80s. “She asks me (through the door) if it’s too cold to run errands or hang laundry. I tell her ‘Stay inside, let your neighbours do your errands.’ I don’t know if she’ll listen.”

Normally, Nault would find keys hanging in a door lock a couple of times per month. Usually, he knocks, rings, and then deposits the keys in the mailbox with a note. “Right now, there are no keys in the doors, because nobody’s going out…We have to look out for older people, especially those that are alone. Everyday we see them, we greet them. We know who’s who, and often they know my schedule and will wait at the window. If I feel like something’s up, I start knocking on doors.”

Nault says packages are delivered without signatures and that means deliveries of marijuana and from Customs get a call card instead, summoning the receiver to a postal outlet to pick it up themselves. Otherwise, “when we deliver a parcel, we put it on the stoop, scan it, ring the bell, and go back six feet to wait for the customer to respond. When they open the door, we scan it as delivered.”

At the Champlain station where he begins his day, he says routines continue to change. “We used to come in a half hour before, chinwag with everyone, now it’s five minutes and get to work, no mingling. Basically it’s ‘come in, get your stuff and get out’.”

For Chiang, one of his biggest concerns comes at day’s end, which also has its protocols, as his three young children are accustomed to embracing him when he walks through the door. “As soon as I walk in they scream and run towards me but I keep them at bay” he laughs, explaining a laborious process that involves a vestibule, outer layers of clothing, washing and changing “before letting them attack me. It’s like a decompression chamber!”