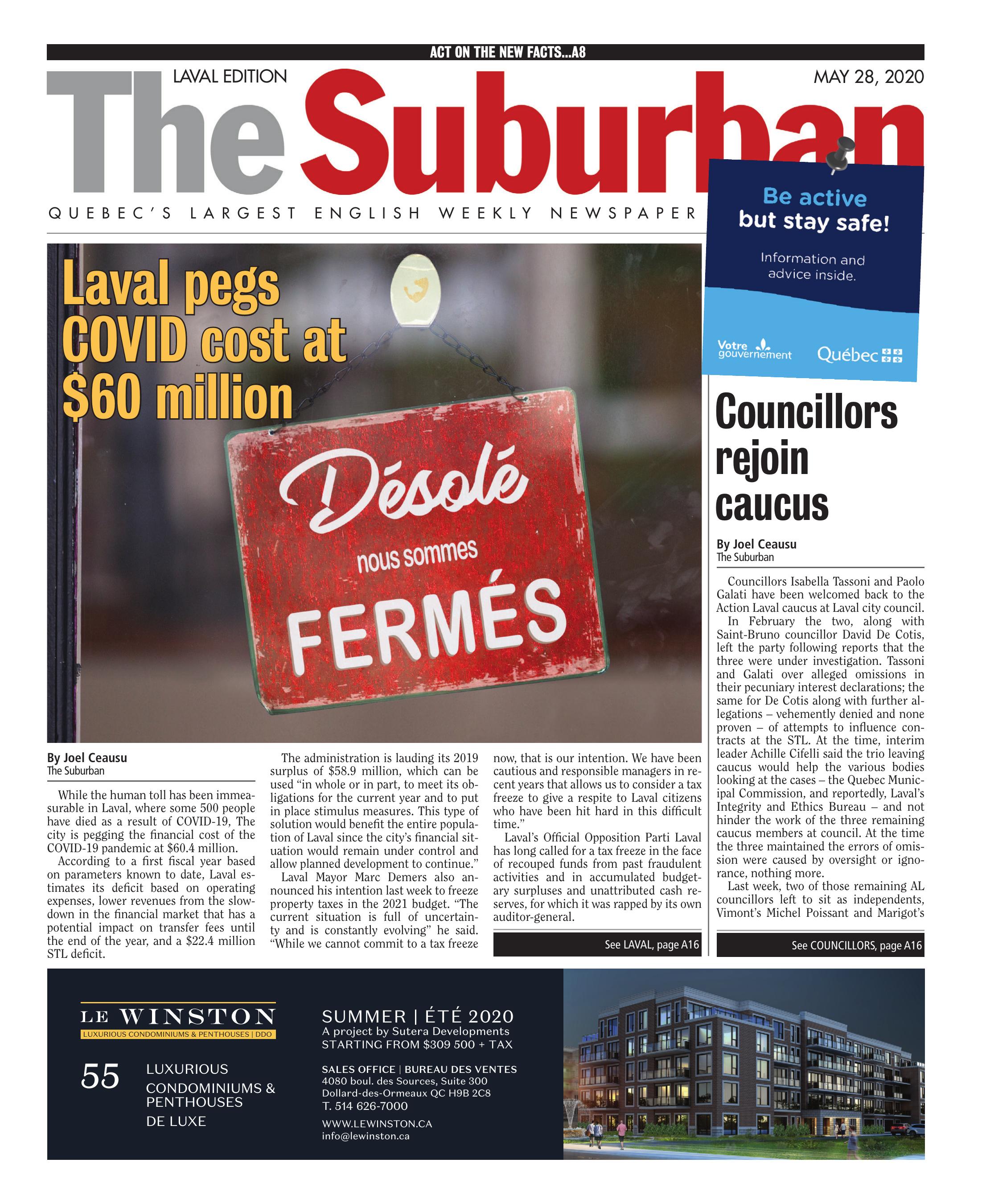 According to a first fiscal year based on parameters known to date, Laval estimates its deficit based on operating expenses, lower revenues from the slowdown in the financial market that has a potential impact on transfer fees until the end of the year, and a $22.4 million STL deficit.

The administration is lauding its 2019 surplus of $58.9 million, which can be used “in whole or in part, to meet its obligations for the current year and to put in place stimulus measures. This type of solution would benefit the entire population of Laval since the city’s financial situation would remain under control and allow planned development to continue.”

Laval Mayor Marc Demers also announced his intention last week to freeze property taxes in the 2021 budget. “The current situation is full of uncertainty and is constantly evolving” he said. “While we cannot commit to a tax freeze now, that is our intention. We have been cautious and responsible managers in recent years that allows us to consider a tax freeze to give a respite to Laval citizens who have been hit hard in this difficult time.”

Laval’s Official Opposition Parti Laval has long called for a tax freeze in the face of recouped funds from past fraudulent activities and in accumulated budgetary surpluses and unattributed cash reserves, for which it was rapped by its own auditor-general.

The city’s $921.4 million budget included a 1.4 percent property tax increase, the sixth hike in as many years.

In March the Demers administration’s council majority handily rejected an opposition councilor’s prescient motion to increase discretionary funds for distribution by councilors to local community organizations sure to feel the pinch in favour of large-scale funding of $400,000 to Centraide, and then last week announced financial support to local organizations that are feeling the brunt of the pandemic as predicted, prompting criticism from Vimont independent councillor Michel Poissant.

“Last month they laughed at my proposal to help local groups, and then they make a big deal about giving $40,000 to one of those groups a few weeks later,” he said, adding the administration is using the current crisis “to continue its irresponsible management.”

Also this month, the city settled out of court in the Commodore affair, with a payout upwards of $13.7 million in cash and land transfers to end a $66.3 million lawsuit.

Councillors Isabella Tassoni and Paolo Galati have been welcomed back to the Action Laval caucus at Laval city council.

In February the two, along with Saint-Bruno councillor David De Cotis, left the party following reports that the three were under investigation. Tassoni and Galati over alleged omissions in their pecuniary interest declarations; the same for De Cotis along with further allegations – vehemently denied and none proven – of attempts to influence contracts at the STL. At the time, interim leader Achille Cifelli said the trio leaving caucus would help the various bodies looking at the cases – the Quebec Municipal Commission, and reportedly, Laval’s Integrity and Ethics Bureau – and not hinder the work of the three remaining caucus members at council. At the time the three maintained the errors of omission were caused by oversight or ignorance, nothing more.

“In May, after fully cooperating with the Quebec Municipal Commission and obtaining confirmation that the Commission is terminating any investigation and will not proceed with any proceedings,” said Cifelli in a statement, the two councillors correcting the issue (Tassoni’s land holdings and Galati’s interest in a real estate firm not disclosed in mandatory pecuniary interest declarations) and were fully reinstated, joining sole sitting councillor Aglaia Revelakis. De Cotis was not mentioned in the release.

Cifelli told The Suburban that Poissant and Hébert knew of the decision “but according to them, what they did was not forgivable, nor acceptable. Imagine the investigation and conclusion is acceptable for the Commission Municipale du Quebec to close both their files, but not for Poissant.” Poissant said “ethics are serious business, and even if something is legal, the perception of an elected official’s behaviour is important, and affects the confidence of the population in their politicians.”

De Cotis founded Mouvement Lavallois Équipe Marc Demers, and in 2018 led a faction of 10 city councillors away from the party, alleging Demers’ lack of respect for democracy and heavy-handed rule at council, eventually joining with lone Action Laval councillor Aglaia Revelakis. Tassoni is a first-term councillor elected with ML, who followed De Cotis to sit as an independent before joining Action Laval, then leaving, and now returning. Galati is formerly of Action Laval, then Mouvement Lavallois, then independent and then Action Laval again before his withdrawal in February to sit as an independent and rejoining the caucus this week.