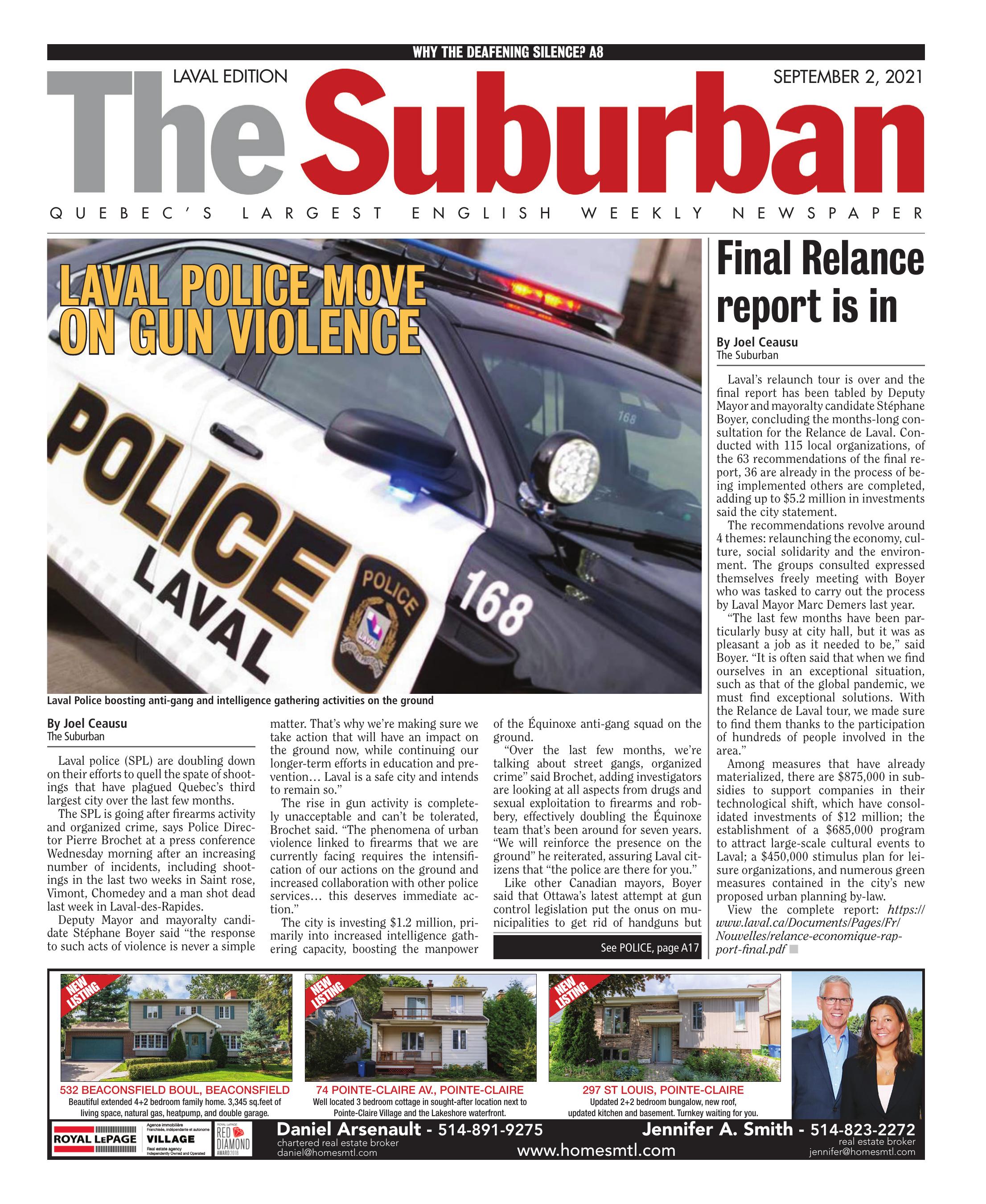 Laval police (SPL) are doubling down on their efforts to quell the spate of shootings that have plagued Quebec’s third largest city over the last few months.

The SPL is going after firearms activity and organized crime, says Police Director Pierre Brochet at a press conference Wednesday morning after an increasing number of incidents, including shootings in the last two weeks in Saint rose, Vimont, Chomedey and a man shot dead last week in Laval-des-Rapides.

Deputy Mayor and mayoralty candidate Stéphane Boyer said “the response to such acts of violence is never a simple matter. That’s why we’re making sure we take action that will have an impact on the ground now, while continuing our longer-term efforts in education and prevention… Laval is a safe city and intends to remain so.”

The rise in gun activity is completely unacceptable and can’t be tolerated, Brochet said. “The phenomena of urban violence linked to firearms that we are currently facing requires the intensification of our actions on the ground and increased collaboration with other police services… this deserves immediate action.”

The city is investing $1.2 million, primarily into increased intelligence gathering capacity, boosting the manpower of the Équinoxe anti-gang squad on the ground.

“Over the last few months, we’re talking about street gangs, organized crime” said Brochet, adding investigators are looking at all aspects from drugs and sexual exploitation to firearms and robbery, effectively doubling the Équinoxe team that’s been around for seven years. “We will reinforce the presence on the ground” he reiterated, assuring Laval citizens that “the police are there for you.”

Like other Canadian mayors, Boyer said that Ottawa’s latest attempt at gun control legislation put the onus on municipalities to get rid of handguns but lacked real power to stop the flow in Canadian cities. “Despite the concrete actions taken today by our administration, the fact remains that this issue has no borders” he added. “That is why we are working closely with the Ministry of Public Security, in order to is implementing a concerted regional approach.”

Sophie Trottier says the added budget and more personnel will help the fight against guns on Laval streets, but the Action Laval mayoralty hopeful added “it is upstream of the problem that action must be taken. If we keep the system as it is now, we will be removing weapons on one end, while more are added on the other end.”

In a statement, the party said young people have no activities after school, no supervision, no social structure to supervise them and outdated infrastructure. “We are leaving the field open to street gangs,” adding that the party wants to set up these structures and organizations. The party also denounced Boyer for announcing a budget of $ 1.2 million for the fight against guns and street gangs “unilaterally, without consulting the representatives of the Laval population, the municipal councillors.”

Laval, which has seen some 30 firearms seized since January and a spate of shootings, has opposed the delegation of handgun control to municipalities proposed by the federal government in Bill C-21, which died on the order paper when the Trudeau government dissolved Parliament to launch an election two years into its mandate. Last week, Montreal Mayor Valérie Plante called for a complete handgun ban, also criticizing the federal attempt to download responsibility to cities in the legislation, which even staunch gun-control advocates criticized as weak. Plante also announced an investment of $5.5 million to increase police manpower this week.

Laval_news
Final Relance report is in

Laval’s relaunch tour is over and the final report has been tabled by Deputy Mayor and mayoralty candidate Stéphane Boyer, concluding the months-long consultation for the Relance de Laval. Conducted with 115 local organizations, of the 63 recommendations of the final report, 36 are already in the process of being implemented others are completed, adding up to $5.2 million in investments said the city statement.

The recommendations revolve around 4 themes: relaunching the economy, culture, social solidarity and the environment. The groups consulted expressed themselves freely meeting with Boyer who was tasked to carry out the process by Laval Mayor Marc Demers last year.

“The last few months have been particularly busy at city hall, but it was as pleasant a job as it needed to be,” said Boyer. “It is often said that when we find ourselves in an exceptional situation, such as that of the global pandemic, we must find exceptional solutions. With the Relance de Laval tour, we made sure to find them thanks to the participation of hundreds of people involved in the area.”

Among measures that have already materialized, there are $875,000 in subsidies to support companies in their technological shift, which have consolidated investments of $12 million; the establishment of a $685,000 program to attract large-scale cultural events to Laval; a $450,000 stimulus plan for leisure organizations, and numerous green measures contained in the city’s new proposed urban planning by-law.