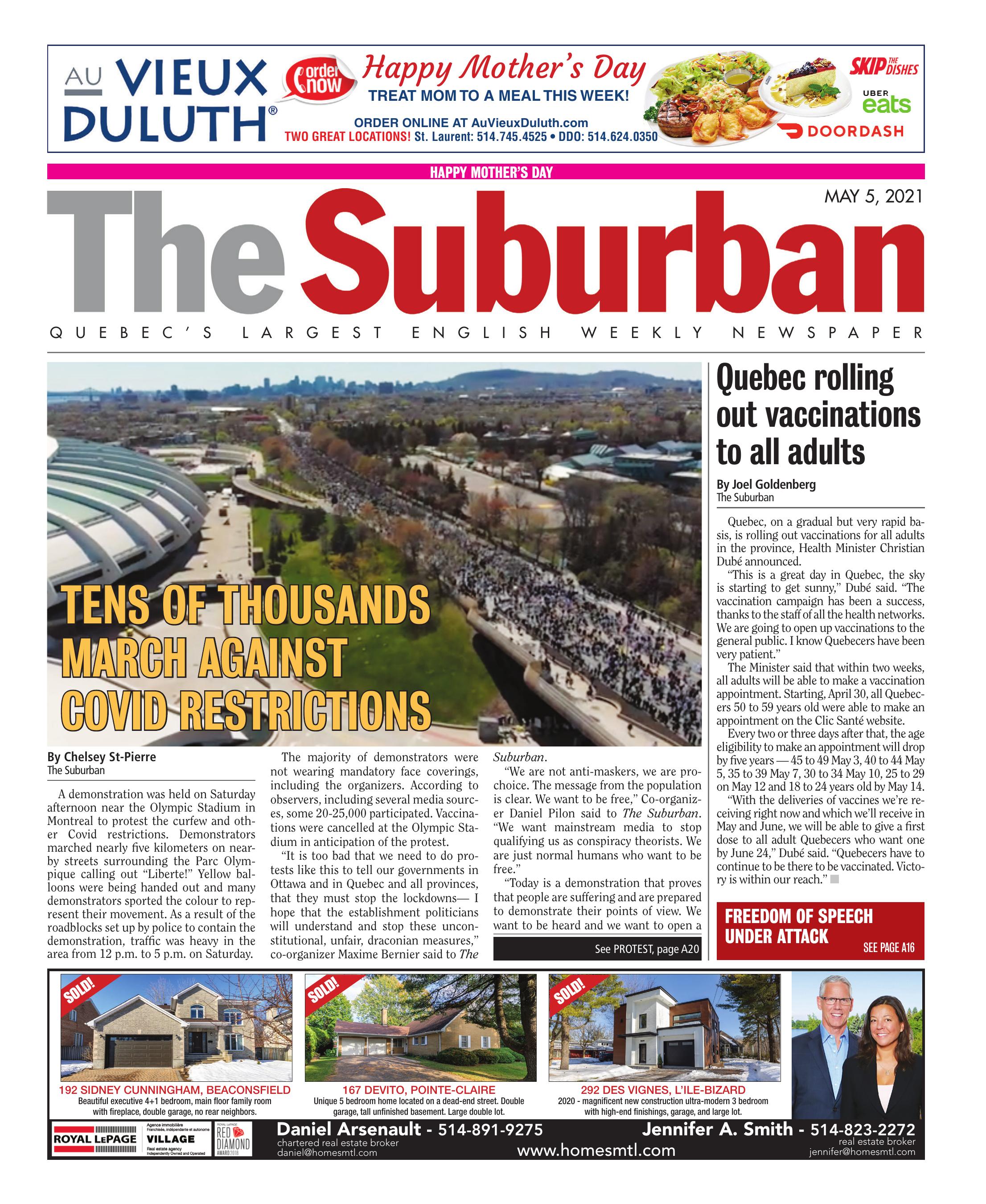 A demonstration was held on Saturday afternoon near the Olympic Stadium in Montreal to protest the curfew and other Covid restrictions. Demonstrators marched nearly five kilometers on nearby streets surrounding the Parc Olympique calling out “Liberte!” Yellow balloons were being handed out and many demonstrators sported the colour to represent their movement. As a result of the roadblocks set up by police to contain the demonstration, traffic was heavy in the area from 12 p.m. to 5 p.m. on Saturday.

The majority of demonstrators were not wearing mandatory face coverings, including the organizers. According to observers, including several media sources, some 20-25,000 participated. Vaccinations were cancelled at the Olympic Stadium in anticipation of the protest.

“It is too bad that we need to do protests like this to tell our governments in Ottawa and in Quebec and all provinces, that they must stop the lockdowns— I hope that the establishment politicians will understand and stop these unconstitutional, unfair, draconian measures,” co-organizer Maxime Bernier said to The Suburban.

“We are not anti-maskers, we are pro-choice. The message from the population is clear. We want to be free,” Co-organizer Daniel Pilon said to The Suburban. “We want mainstream media to stop qualifying us as conspiracy theorists. We are just normal humans who want to be free.”

“Today is a demonstration that proves that people are suffering and are prepared to demonstrate their points of view. We want to be heard and we want to open a dialogue, without confrontation with the government that makes sense,” the third co-organizer, Samuel Grenier, told us.

In a social media post, Montreal Mayor Valerie Plante wrote that she is not questioning the right to protest, but implementing and adhering to strict public health measures is the best way to return to normality. “After the demonstration ended, hundreds of demonstrators remained on site and at around 4:30 p.m. as police asked them to leave, they began throwing cans, rocks, garbage and even fireworks at officers,” SPVM spokesperson Manuel Couture told The Suburban. “They dispersed and continued re-appearing at nearby parks in smaller groups causing disturbances until about 7:30 p.m.”

Five persons were arrested and 28 tickets for violation of sanitary measures were handed out throughout the demonstration.

Quebec, on a gradual but very rapid basis, is rolling out vaccinations for all adults in the province, Health Minister Christian Dubé announced.

“This is a great day in Quebec, the sky is starting to get sunny,” Dubé said. “The vaccination campaign has been a success, thanks to the staff of all the health networks. We are going to open up vaccinations to the general public. I know Quebecers have been very patient.”

“With the deliveries of vaccines we’re receiving right now and which we’ll receive in May and June, we will be able to give a first dose to all adult Quebecers who want one by June 24,” Dubé said. “Quebecers have to continue to be there to be vaccinated. Victory is within our reach.”