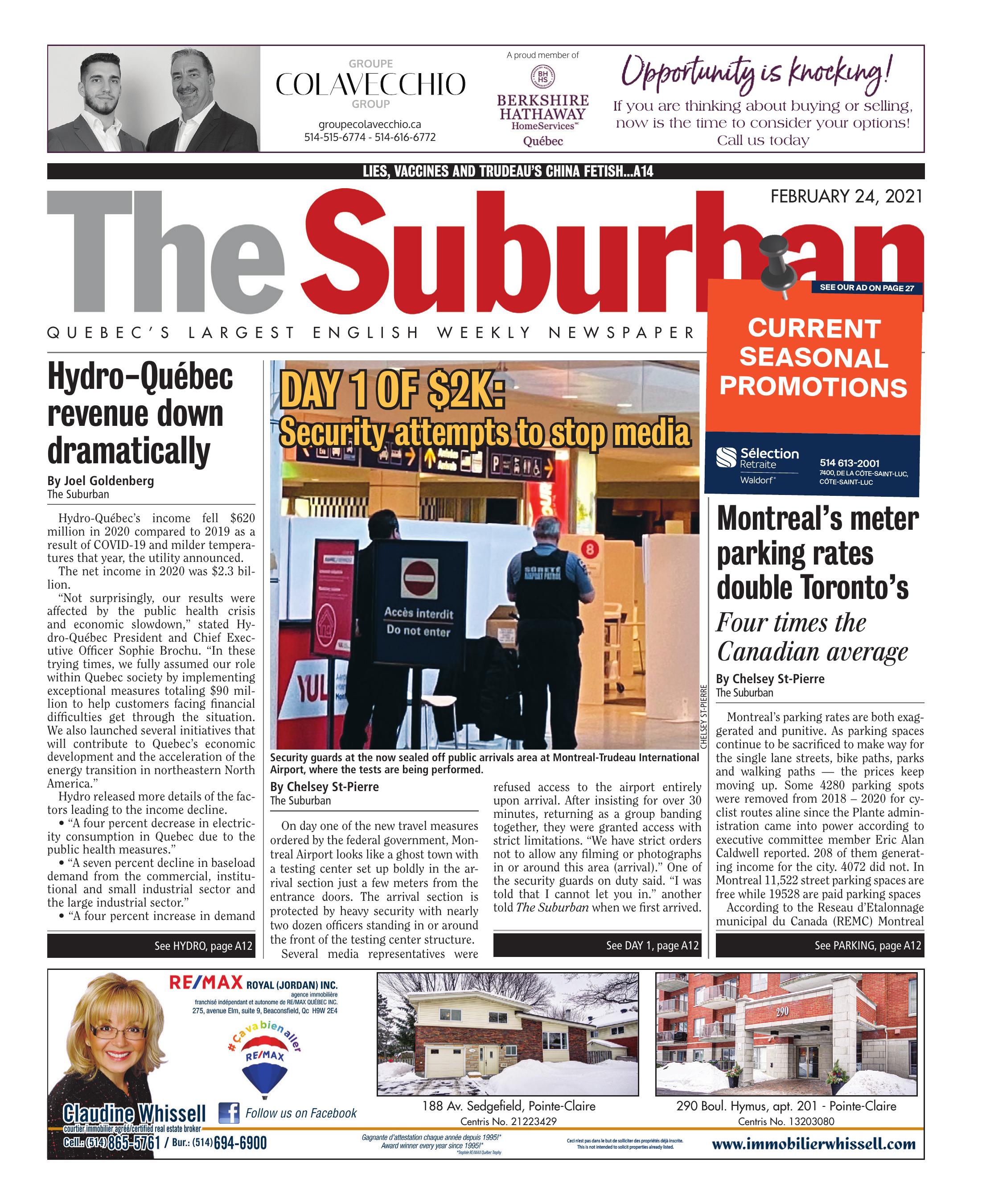 Several media representatives were refused access to the airport entirely upon arrival. After insisting for over 30 minutes, returning as a group banding together, they were granted access with strict limitations. “We have strict orders not to allow any filming or photographs in or around this area (arrival).” One of the security guards on duty said. “I was told that I cannot let you in.” another told The Suburban when we first arrived.

The Suburban also attempted to interview the hotel managers of Aloft Montreal Airport, Crowne Plaza Montreal Airport, Holiday Inn Express and Suites and Montreal Airport Marriott In-Terminal — all of which said to us “We are not able to offer any comment.” It seemed evident that both airport staff and hotel staff were instructed not to share any information with the media.

An announcement heard over loud speakers every 15 minutes or so inside the airport repeats “Federal authorities require returning travelers to quarantine upon arrival. Failure to comply will result in fines, penalties or imprisonment.”

The departure section is scarce, the majority of check-in booths are closed and baggage check is operating at minimal capacity. In a 30 minute period, less than a half dozen people were seen registering at the departure booths.

Incoming travelers are required to be tested at their own cost before leaving the airport in shuttle busses to quarantine in one of four government approved local hotels also at their own cost.

City_news
Dramatic Hydro revenue fall due to COVID and weather

Hydro-Québec’s income fell $620 million in 2020 compared to 2019 as a result of COVID-19 and milder temperatures that year, the utility announced.

“Not surprisingly, our results were affected by the public health crisis and economic slowdown,” stated Hydro-Québec President and Chief Executive Officer Sophie Brochu. “In these trying times, we fully assumed our role within Quebec society by implementing exceptional measures totaling $90 million to help customers facing financial difficulties get through the situation. We also launched several initiatives that will contribute to Quebec’s economic development and the acceleration of the energy transition in northeastern North America.”

Hydro released more details of the factors leading to the income decline.

• “A four percent decrease in electricity consumption in Quebec due to the public health measures.”

• “A four percent increase in demand from the residential sector.”

• Outside Quebec, “a $537-million contribution to net income.”

• “A price decline of some 25% on the company’s main export markets.”

• “A decrease mitigated by positive impact of sales and risk management strategies.”

More specifically, in Quebec, “net electricity sales decreased by $146 million essentially because of the impact of temperatures, which were milder in 2020 than in 2019 during most of the months when heating requirements affect customers’ energy consumption.

“On markets outside Québec, net electricity exports declined by $116 million on account of first-quarter temperature variances, which resulted in lower demand and prices on export markets, and the repercussions of the pandemic, which also led to lower prices and market requirements, especially in the second quarter. Operational expenditure was $328 million higher than the previous year, partly because of the effect of the pandemic—in particular the rise in the allowance related to the collectibility risk for certain accounts receivable—and an increase in the Pension Plan’s current service cost, mainly due to a decrease in the discount rates.”

“Although we faced strong headwinds in 2020, we’ll be able to pay a dividend of over $1.7 billion to our shareholder, the Quebec government,” stated Jean-Hugues Lafleur, Executive Vice President and Chief Financial Officer. “This amount, combined with the economic spinoffs of our operations throughout the province, confirms Hydro-Québec’s role as a major contributor to the Quebec economy.”

Montreal’s parking rates are both exaggerated and punitive. As parking spaces continue to be sacrificed to make way for the single lane streets, bike paths, parks and walking paths — the prices keep moving up. Some 4280 parking spots were removed from 2018 – 2020 for cyclist routes aline since the Plante administration came into power according to executive committee member Eric Alan Caldwell reported. 208 of them generating income for the city. 4072 did not. In Montreal 11,522 street parking spaces are free while 19528 are paid parking spaces

According to the Reseau d’Etalonnage municipal du Canada (REMC) Montreal earned $6,981 per paid parking space in 2019. That’s almost double Toronto’s average revenues of $3,543 per paid parking space according to the Toronto Parking Authority’s Operating Budget notes. The Canadian median is $1,563. There are also the tickets. Confusing signage being one of the main culprits.

Montreal Parking operates 28 municipal parking lots, totaling 3,084 paid spaces. “If you want to park your car on the street in Montréal, you need to pay attention to signage,” the City of Montreal marked on their webpage.

Parking is generally paid on major thoroughfares and shopping streets. In some sectors, parking spaces are reserved for residents if they have a permit.

Some 5,889 bicycle racks (rings) are installed on parking meters in the various boroughs of Montreal. There are no fees associated with the use of these racks.

Free parking for motorcycles is also available from April 1 to October 31 in downtown Montreal.