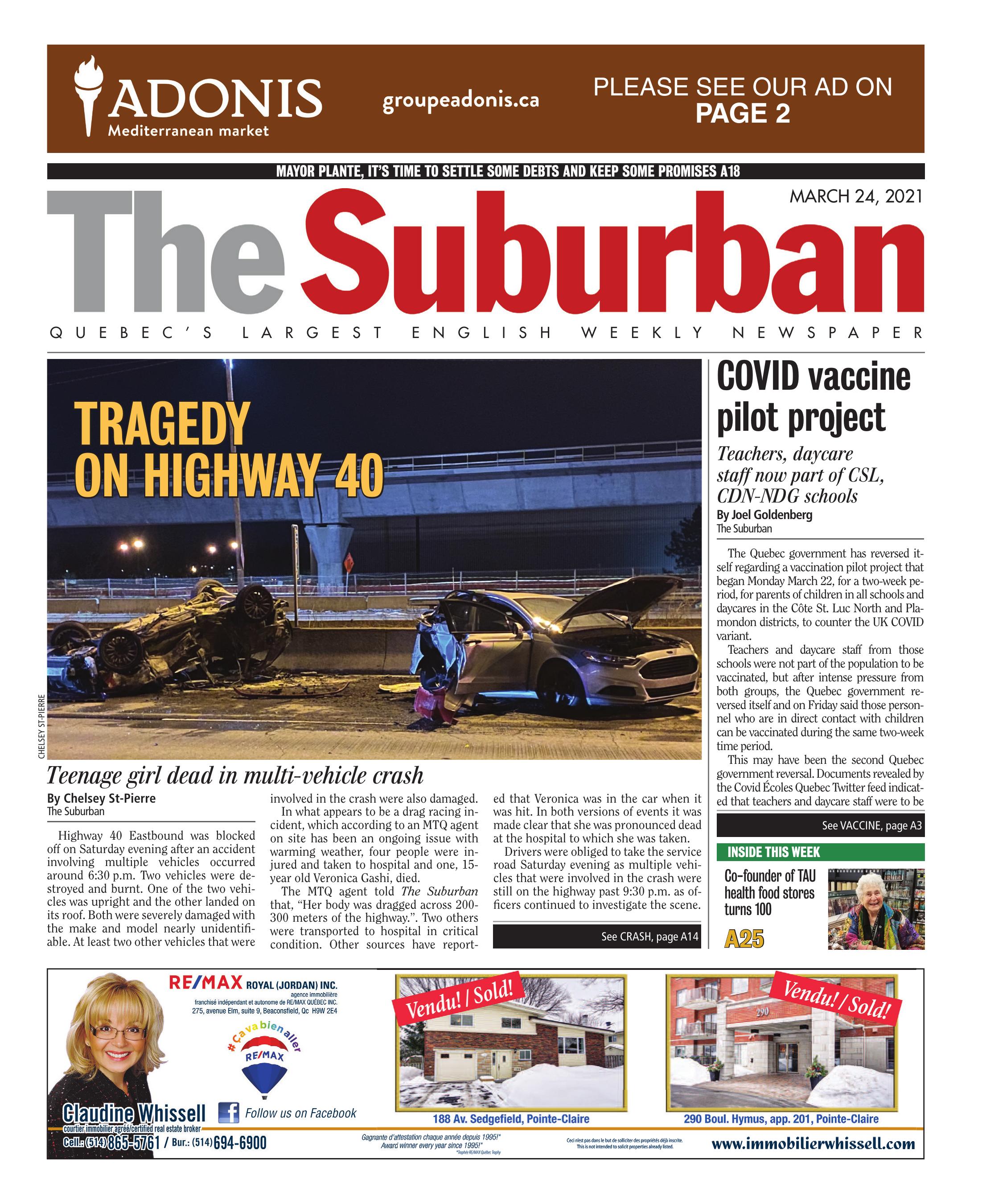 Highway 40 Eastbound was blocked off on Saturday evening after an accident involving multiple vehicles occurred around 6:30 p.m. Two vehicles were destroyed and burnt. One of the two vehicles was upright and the other landed on its roof. Both were severely damaged with the make and model nearly unidentifiable. At least two other vehicles that were involved in the crash were also damaged.

In what appears to be a drag racing incident, which according to an MTQ agent on site has been an ongoing issue with warming weather, four people were injured and taken to hospital and one, 15-year old Veronica Gashi, died.

The MTQ agent told The Suburban that, “Her body was dragged across 200-300 meters of the highway.”. Two others were transported to hospital in critical condition. Other sources have reported that Veronica was in the car when it was hit. In both versions of events it was made clear that she was pronounced dead at the hospital to which she was taken.

Drivers were obliged to take the service road Saturday evening as multiple vehicles that were involved in the crash were still on the highway past 9:30 p.m. as officers continued to investigate the scene.

Two relatives of the victims arrived on site around 8:20 p.m. but could not offer any comments as they were set to meet with investigators.

Christian Liberale, a driver passing by, pulled to the side of the road moments after the accident occured in a heroic effort to save the victims of the crash. He managed, with help, to remove one of the victims who was stuck in the backseat of one of the vehicles while it was on fire. He managed to move the victim’s body a safe distance away from the vehicle moments before the vehicle burst into flames.

While there, Liberale took a series of photos where a group of young people can be seen holding and loading up a person into a vehicle. In a second photo with the time stamp a minute later, the vehicle that the person was loaded into, a black mercedes, was no longer there.

According to Surete du Quebec spokesperson, Anik Lamirande, one of the four victims whom she referred to as the principal suspect is presently in critical condition and may be facing charges of reckless driving causing death. “We cannot confirm this at this time, however when her health permits, we will interrogate her.” she told The Suburban.

“With the information we have at this time, it appears that speed was the primary cause.” Lamirande said.

According to Societe l’Assurance Automobile du Quebec (SAAQ) statistics, the category of persons aged 16-24 represents 14% of all road accidents while they are only 8% of Quebec driver’s permit holders. 54% of accidents involving persons in the age group of 16-24 were caused by speeding with 29% pertaining to speeding infractions of 45 km above the speed limit, or more.

“The number of speeding infractions involving persons in the 16-24 age category is double the number of infractions of all age categories 25 and over.” SAAQ spokesperson, Gino Desrosiers said to The Suburban. “The lack of experience and maturity combined with the sense of invincibility tends to play a role in many of those cases.” he said.

The Quebec government has reversed itself regarding a vaccination pilot project that began Monday March 22, for a two-week period, for parents of children in all schools and daycares in the Côte St. Luc North and Plamondon districts, to counter the UK COVID variant.

Teachers and daycare staff from those schools were not part of the population to be vaccinated, but after intense pressure from both groups, the Quebec government reversed itself and on Friday said those personnel who are in direct contact with children can be vaccinated during the same two-week time period.

This may have been the second Quebec government reversal. Documents revealed by the Covid Écoles Quebec Twitter feed indicated that teachers and daycare staff were to be part of the pilot project, but Mylène Drouin, Montreal’s public health director, told The Suburban that had been an error and apologized.

Parents of all the affected daycares and schools are supposed to have been notified, and there is a special section of the Clic-santé website for them to use. The vaccination sites are the Donald Berman Maimonides Geriatric Centre, the Jewish General Hospital, the Bill Durnan Arena and the latest, the Université de Montréal MIL campus at 1375 Thérèse-Lavoie-Roux, which begins operations in general Friday March 19. The latter was the locale of a press conference Thursday, at which the pilot vaccination project was officially announced.

The northern CSL area includes Côte St. Luc except for most of the area south of Fleet Road. According to the City of Côte St. Luc, the affected schools include École des Amis-du-Monde, Académie Yéshiva Yavné, Hebrew Academy, École Maïmonide, John Grant High School, École de la Mosaïque, JPPS and Bialik, but not Merton School. CSL posted on Facebook that “regarding Merton School, the city has been requesting that it, too, be included in the vaccine-for-parents pilot project. Ultimately Santé Montreal—which is part of the Quebec health ministry—will decide. If there is news to report, we will share.”

Dr. Debbie Schwarz has written to Drouin that “almost all of Merton’s families live within CSL, many in the H4W postal code region, one of the designated COVID variant ‘hot spots.’ In order to conduct this pilot project in the most scientific manner, and to maximize its success, it would only make sense to vaccinate all parents with students in all of CSL’s schools, not excluding a central area of the outbreak. If not all of the region’s schools are included, any conclusions drawn from this pilot project will be potentially invalid.”

The other area affected is Côte des Neiges-NDG, mainly Snowdon, east of Décarie bordered by the Villa Maria Métro station to the south, Lavoie to the east and Vézina to the north. Schools and daycares affected include Herzliah, the Sylvan Adams YM-YWHA daycare, Coronation and others, but according to a document released by Covid Écoles Quebec, there is no plan to release an official list of affected schools and daycares for privacy reasons.

Sources have said the H3S postal code, further east into Côte des Neiges-NDG up to the border with Outremont, is also affected. But when we asked at Thursday’s press conference if this is the case, Drouin did not know offhand.

“What we’ve seen in Montreal is we have more and more variants and we have a concentration of variants in specific sectors, mostly in Côte St. Luc and the Plamondon district,” Drouin said. “We have variants in other territories, but we are not seeing community transmission in other neighbourhoods. The CSL and Plamondon areas represent 26 percent of all our new cases of variants. For instance, in CSL, we have seen that 86 percent of variant cases were associated with outbreaks in a daycare centre or school. We will see if we are able to reduce the transmission rate in households and reduce the spread of the virus to other territories.

“This is a pilot project and we will evaluate the outcome.”

Francine Dupuis, CIUSSS West-Central Montreal Associate CEO, said the letters sent to the parents involved include all the details as to how to get the vaccination.

Drouin was also asked why Merton School in southern CSL was left out. She repeated that the effort is a pilot project and that margins have to be defined.

’We know we have schools in other territories that have the variants, and we will be aggressive, but for the time being, we’ll see if we can have interesting results, to gain more knowledge, not only to protect the most vulnerable, but to reduce transmission.”

Côte St. Luc Mayor Mitchell Brownstein told The Suburban that he has been asked to assist in “sending the message to everyone eligible to do their civic duty and get vaccinated.

“We will use all our communication abilities to advise our population.”

We also asked Dupuis about the vaccination of health workers who work in private practice and GMF clinics, who do not also work in hospitals or take part in home care. She had previously told us they would likely receive vaccinations the week of March 15, but it has not happened yet.

Dupuis expressed sympathy for that group.

“The Ministry has announced that they will be the next group — perhaps not [the week of March 22], but probably the week after. They’re at the top of the list.”

“We really want to concentrate on the general population, because the more we vaccinate the first dose, the less chance the variant can win the battle.” 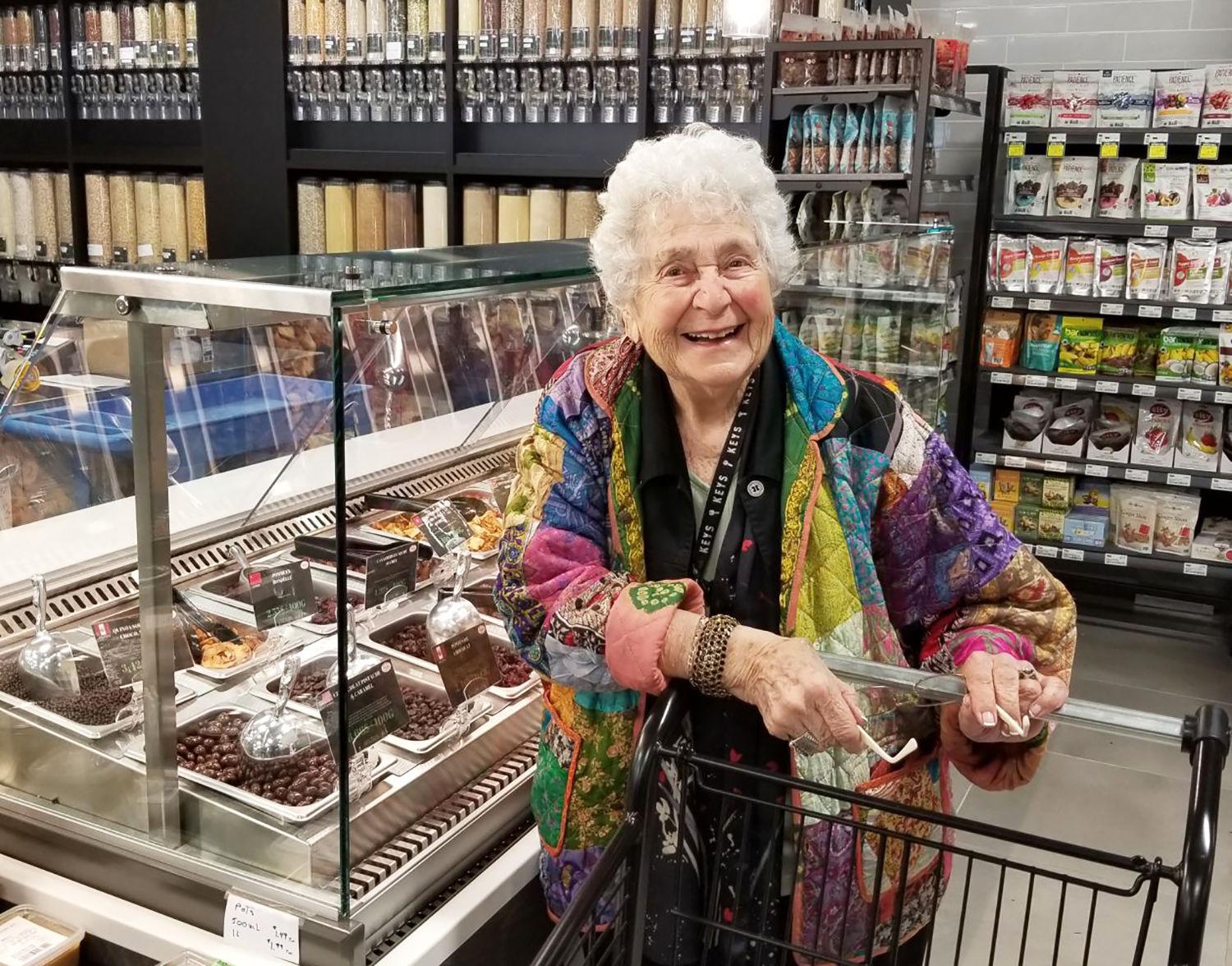