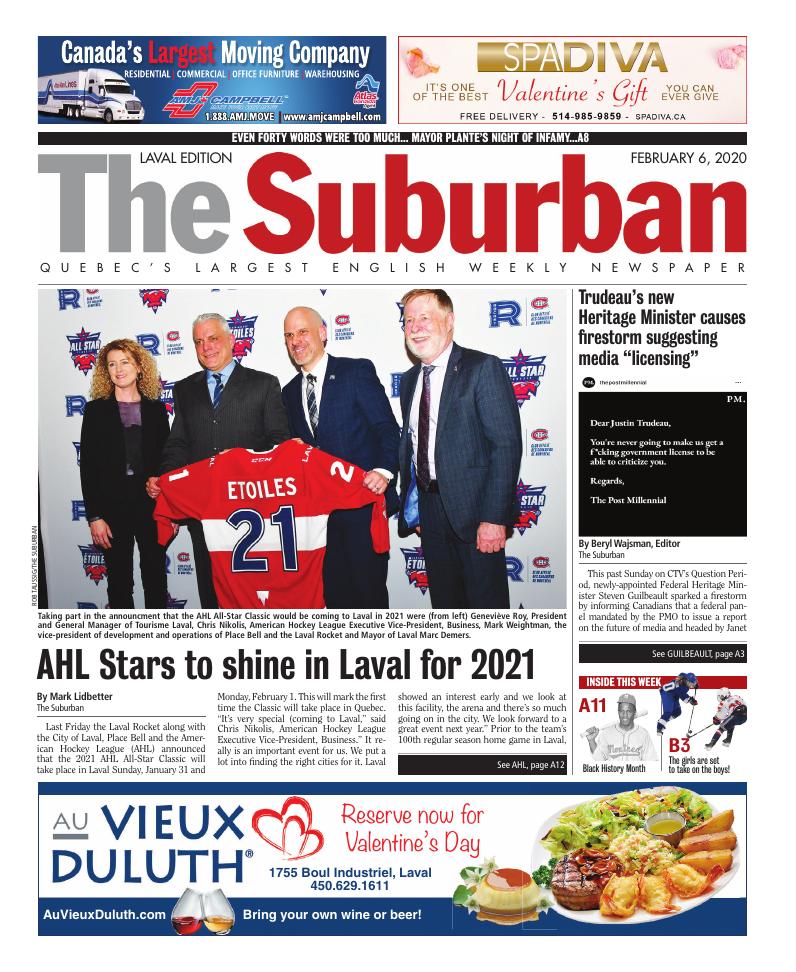 Sports
AHL Stars to shine in Laval for 2021 All-Star Classic
By Mark Lidbetter The Suburban
02.06.20
Rob Taussig The Suburban

Taking part in the announcment that the AHL All-Star Classic would be coming to Laval in 2021 were (from left) Geneviève Roy, President and General Manager of Tourisme Laval, Chris Nikolis, American Hockey League Executive Vice-President, Business, Mark Weightman, the vice-president of development and operations of Place Bell and the Laval Rocket and Mayor of Laval Marc Demers.

(From left) Chris Nikolis, American Hockey League Executive Vice-President, Business, Mayor of Laval Marc Demers and Mark Weightman, the vice-president of development and operations of Place Bell and the Laval Rocket took part in announcing that the AHL All-Star Classic will take place in Laval in 2021.

“Since their very first game at Place Bell, the Rocket has conquered the hearts of fans while shining a bright light on the City of Laval,” said Mayor of Laval Marc Demers. “The announcement that the American Hockey League’s All-Star Classic will be coming to Laval represents a tremendous source of pride that will allow more people to discover our exceptional island.”

Last Friday the Laval Rocket along with the City of Laval, Place Bell and the American Hockey League (AHL) announced that the 2021 AHL All-Star Classic will take place in Laval Sunday, January 31 and Monday, February 1. This will mark the first time the Classic will take place in Quebec. “It’s very special (coming to Laval,” said Chris Nikolis, American Hockey League Executive Vice-President, Business.” It really is an important event for us. We put a lot into finding the right cities for it. Laval showed an interest early and we look at this facility, the arena and there’s so much going on in the city. We look forward to a great event next year.” Prior to the team’s 100th regular season home game in Laval, Mark Weightman, the vice-president of development and operations of Place Bell and the Laval Rocket made the announcement before unveiling the official All-Star Classic logo in the presence of members of the Laval and Montreal business and political communities, the club’s main partners, sports personalities and ardent Rocket fans. “We’re all very proud of this announcement,” Mark Weightman said. “From my perspective of doing two Grey Cups and a Vanier Cup, this to me is a very similar three day festival. It celebrates our league our sport in a new market that’s grown exceptionally so I am very happy and proud.” It will be a full weekend as the Rocket is planning major festivities to celebrate Laval and its sporting community. The AHL club has been a presence in Laval from their arrival and will make the city front and centre for this major event, including establishing an entertainment hub for the Classic at Centroplois. “Since their very first game at Place Bell, the Rocket has conquered the hearts of fans while shining a bright light on the City of Laval,” said Mayor of Laval Marc Demers. “The announcement that the American Hockey League’s All-Star Classic will be coming to Laval represents a tremendous source of pride that will allow more people to discover our exceptional island.” Sunday will feature the popular Skills competition and on the Monday there will be the AHL Hall of Fame Induction and Awards Ceremony followed by the 2021 AHL All-Star Challenge that evening. “Tourisme Laval is proud to welcome this wonderful festival that will boost our regional economy and put a spotlight on our city and its sports scene across North America,” said Geneviève Roy, President and General Manager of Tourisme Laval. “This event will showcase Greater Montreal’s winter tourism offering, highlight the attractiveness of downtown Laval, and help position the region as an authentic family destination with unique and memorable experiences.” The 2021 AHL All-Star Classic will feature the top young talent in the American Hockey League: since 1995, more than 94 percent of All-Star Classic participants have gone on to compete in the National Hockey League. Among those who graduated to the NHL are Patrice Bergeron, Ben Bishop, Zdeno Chara, Logan Couture, Connor Hellebuyck, Braden Holtby, William Nylander, Kyle Palmieri, Zach Parise, Tuukka Rask, Pekka Rinne and Eric Staal.

This past Sunday on CTV’s Question Period, newly-appointed Federal Heritage Minister Steven Guilbeault sparked a firestorm by informing Canadians that a federal panel mandated by the PMO to issue a report on the future of media and headed by Janet Yale, recommended that all companies that deliver “audio, audiovisual, and alphanumeric news content” to Canadians should be regulated, through some form of a licence or registration. Guilbeault stated to Evan Solomon that, “If you’re a distributor of content in Canada and obviously if you’re a very small media organization the requirement probably wouldn’t be the same if you’re Facebook, or Google. There would have to be some proportionality embedded into this, but we would ask that they have a license, yes.” Those last ten words unleashed the torrent of opposition.

When asked what the “media content” meant precisely, Guilbeault said “...the important answer is not what my definition is, but in the report, they refer to media as anyone who produces content, and then they say that for news agencies, there will be no licensing required.”

The backlash over Guilbeault’s comments and the Yale Report is coming from media circles as well as political ones and is being fed by a deep suspicion — particularly in digital media — that the federal government will attempt to implement the Report’s media constraints just as the Quebec government tried to with the Payette Report until The Suburban led the successful fight against it. Montreal’s Matthew Azrieli, the Publisher of the online Post-Millenial, scathingly reflected the fears and frustrations of many with the illustration accompanying this story that the Post-Millenial put up on social media.

Speaking to The Suburban, Azrieli said,”In only two and a half years, The Post Millennial has acquired a minimum monthly audience of over 3,000,000 unique users. Over 80% of our audience is Canadian. We have grown so much in such little time because we have stood almost alone in Canadian digital media as one of the few online outlets representing any perspective other than the mainstream Liberal Party narrative. We tell the stories that establishment media outlets simply don’t tell. Assume, for a moment, that The Post Millennial cannot acquire a license due to our paper’s editorial stance. The bulwark of our readers live in small, rural communities in Ontario, Saskatchewan, Alberta, and British Columbia. The local papers of these towns have been shuttered and closed down. The resources that the federal government should have given to these local outlets were instead diverted to established media entities in Toronto and Montreal. The feeling of “Western alienation” is very real for these communities.”

Azrieli comtinued, “What would happen if the Trudeau government deemed the only credible news source they have unworthy of licensing? We are committed to standing for all Canadians and presenting the news without government interference.”

Monday morning Guilbeault attempted to walk back his Sunday remarks, but that brought only more confusion and condemnation. Guilbeault stated that the report’s licensing recommendation wouldn’t apply to news media outlets and that he was referring to outlets that produce and distribute content. He said, “The word “media” can be confusing, I recognize that, because the report talks about media, but not necessarily in the sense of news agencies and maybe the confusion comes from there.”

Conservative leader Andrew Scheer led off Question Period on Monday stating, “George Orwell’s ‘1984’ was supposed to be a cautionary tale about the evils of big government, not an instruction manual for this Prime Minister. Trudeau answered, “I want to be unequivocal. We will not impose licensing requirements on news organizations, nor will we regulate news content.”

Conservative MP Michelle Rempel Garner, who is her party’s industry and economic development critic, said it was unacceptable that Guilbeault suggested he needed to clarify the government’s position on account of public confusion. She said that more concrete clarity is necessary about the Liberals’ position. “I think that the government has to be very clear about one thing: that the role of the state is to not interfere in people’s rights.”

Appearing on CTV’s “Power Play” Monday , Guilbeault said that when it comes to what qualifies as a news organization, “the government is not in the business of deciding that.” He tried to walk back his Sunday comments again saying the government,”..has no intention to impose licensing requirements on news organizations, nor would we try to regulate news content. We are committed to a free and independent press, which is essential to our democracy.”

Rempel Garner later also appeared on CTV’s Power Play and called Guilbeault’s interview on the same show “a trainwreck.” She pointedly said, “He couldn’t even define what news meant in regards to new regulation.” NDP MP Heather McPherson also expressed concerns on Power Play, saying Guilbeault’s clarification had been “opaque, at best.” She emphasized that,”All Canadians need to know that we have a free and independent press.” 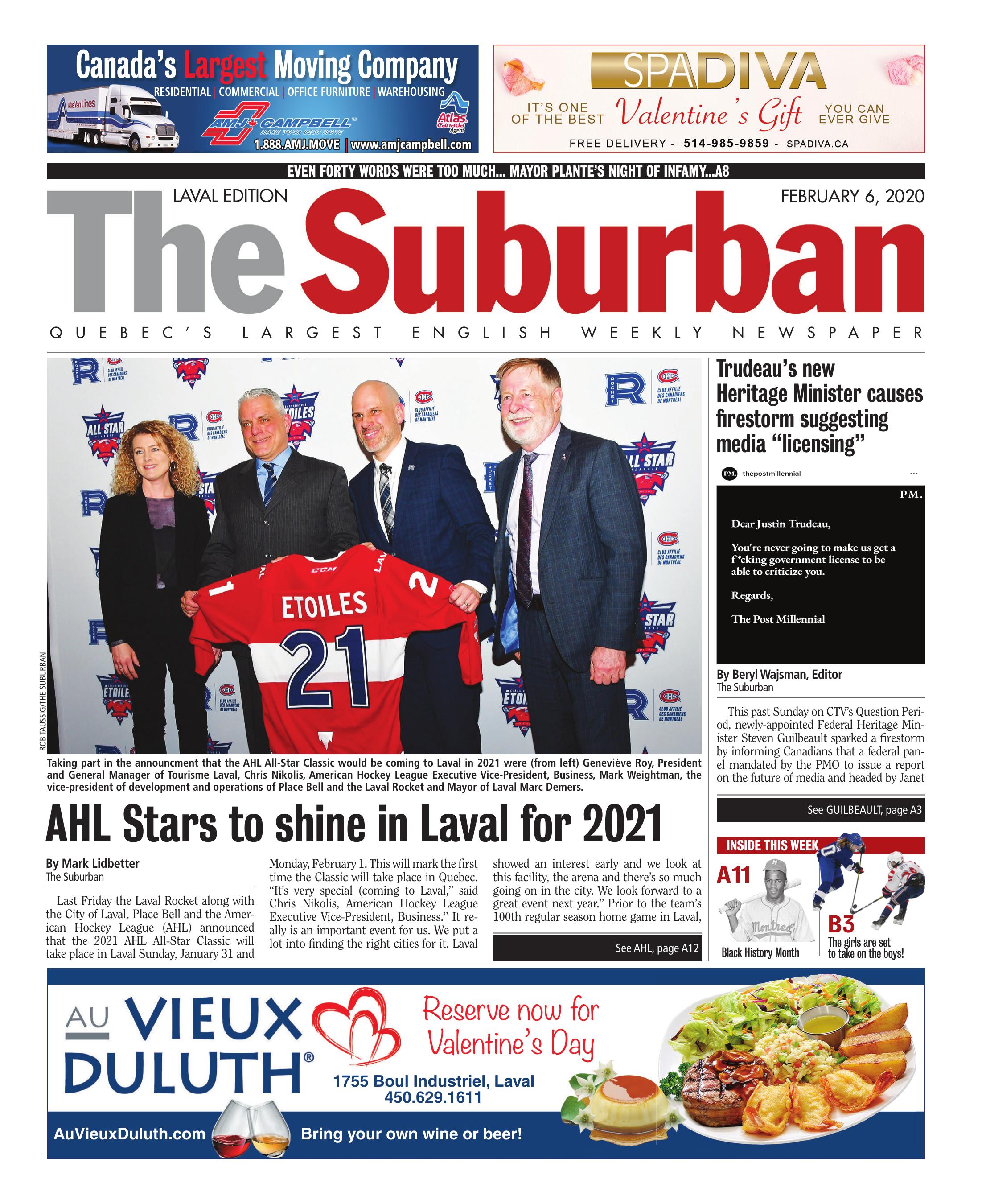