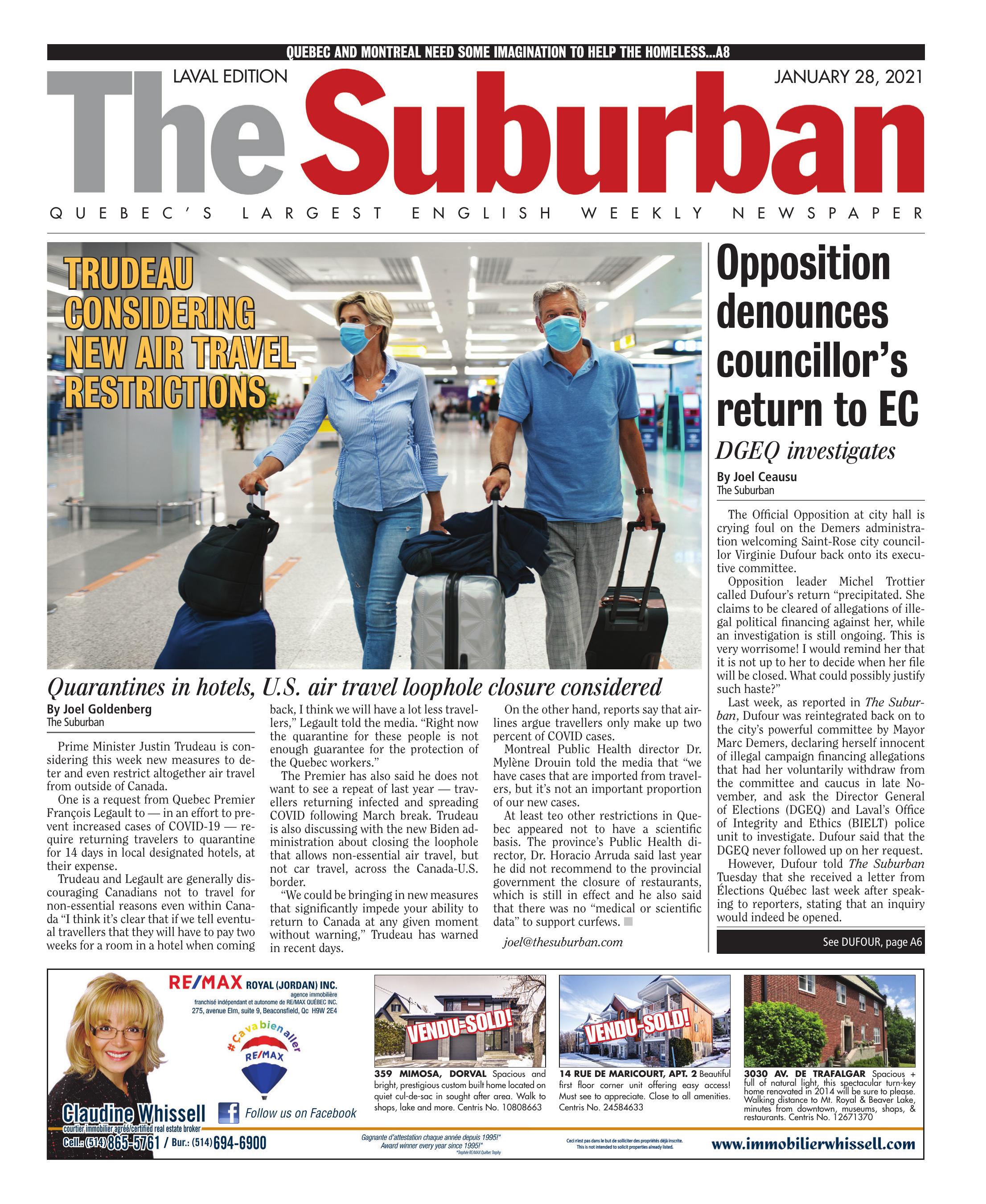 Prime Minister Justin Trudeau is considering this week new measures to deter and even restrict altogether air travel from outside of Canada.

One is a request from Quebec Premier François Legault to — in an effort to prevent increased cases of COVID-19 — require returning travelers to quarantine for 14 days in local designated hotels, at their expense.

Trudeau and Legault are generally discouraging Canadians not to travel for non-essential reasons even within Canada “I think it’s clear that if we tell eventual travellers that they will have to pay two weeks for a room in a hotel when coming back, I think we will have a lot less travellers,” Legault told the media. “Right now the quarantine for these people is not enough guarantee for the protection of the Quebec workers.”

The Premier has also said he does not want to see a repeat of last year — travellers returning infected and spreading COVID following March break. Trudeau is also discussing with the new Biden administration about closing the loophole that allows non-essential air travel, but not car travel, across the Canada-U.S. border.

“We could be bringing in new measures that significantly impede your ability to return to Canada at any given moment without warning,” Trudeau has warned in recent days.

On the other hand, reports say that airlines argue travellers only make up two percent of COVID cases.

Montreal Public Health director Dr. Mylène Drouin told the media that “we have cases that are imported from travelers, but it’s not an important proportion of our new cases.

At least teo other restrictions in Quebec appeared not to have a scientific basis. The province’s Public Health director, Dr. Horacio Arruda said last year he did not recommend to the provincial government the closure of restaurants, which is still in effect and he also said that there was no “medical or scientific data” to support curfews.

Dufour on DGEQ investigation: "This is what I wanted from the very beginning since I truly believe this will help clear my name."

The Official Opposition at city hall is crying foul on the Demers administration welcoming Saint-Rose city councillor Virginie Dufour back onto its executive committee.

Opposition leader Michel Trottier called Dufour’s return “precipitated. She claims to be cleared of allegations of illegal political financing against her, while an investigation is still ongoing. This is very worrisome! I would remind her that it is not up to her to decide when her file will be closed. What could possibly justify such haste?”

Last week, as reported in The Suburban, Dufour was reintegrated back on to the city’s powerful committee by Mayor Marc Demers, declaring herself innocent of illegal campaign financing allegations that had her voluntarily withdraw from the committee and caucus in late November, and ask the Director General of Elections (DGEQ) and Laval’s Office of Integrity and Ethics (BIELT) police unit to investigate. Dufour said that the DGEQ never followed up on her request.

However, Dufour told The Suburban Tuesday that she received a letter from Élections Québec last week after speaking to reporters, stating that an inquiry would indeed be opened. “I am relieved that an inquiry will be opened, this is what I wanted from the very beginning since I truly believe this will help clear my name. As I said before, I’ll fully collaborate with the authorities.” Élections Québec won't confirm or deny an investigation. If, however, an investigation reveals a violation of the law, a statement of offense is issued which will be public.

In November, a secret recording of an alleged exchange between Dufour’s former campaign organizer and his partner was obtained by Journal de Montréal, in which he reportedly explains that his $100 and $200 donations to the candidate had been reimbursed in cash by Dufour. Questioned by reporters, Normand Cusson denied the charge, saying he lied to his partner to assuage her concerns over his supporting Dufour financially.

Dufour said the BIELT unit informed her that the file was closed, and her legal team obtained an affidavit from Cusson, confirmed by The Suburban, declaring the charges to be untrue.

Municipal political donations are capped at $100 per elector in money, goods or services per calendar year, with an additional $100 during an election year. In prête-nom schemes, contributors donate to a candidate or party and then are reimbursed the amount donated to channel more cash into a campaign than is permitted by law. Violators face fines from $5,000 up to $20,000, loss of rights to vote or stand for election; and to enter into a public contract.

Trottier says the Demers administration is “overruling the competent authorities. There is an investigation that is underway, it is important that we go through this process before drawing any conclusions.” He further lambasted her defense, relying on an affidavit “from someone who says that he must be believed when he says he lied, you will agree that this raises questions, especially when you know that until recently, there were contractual ties between Mr. Cusson's business and Mouvement lavallois!”