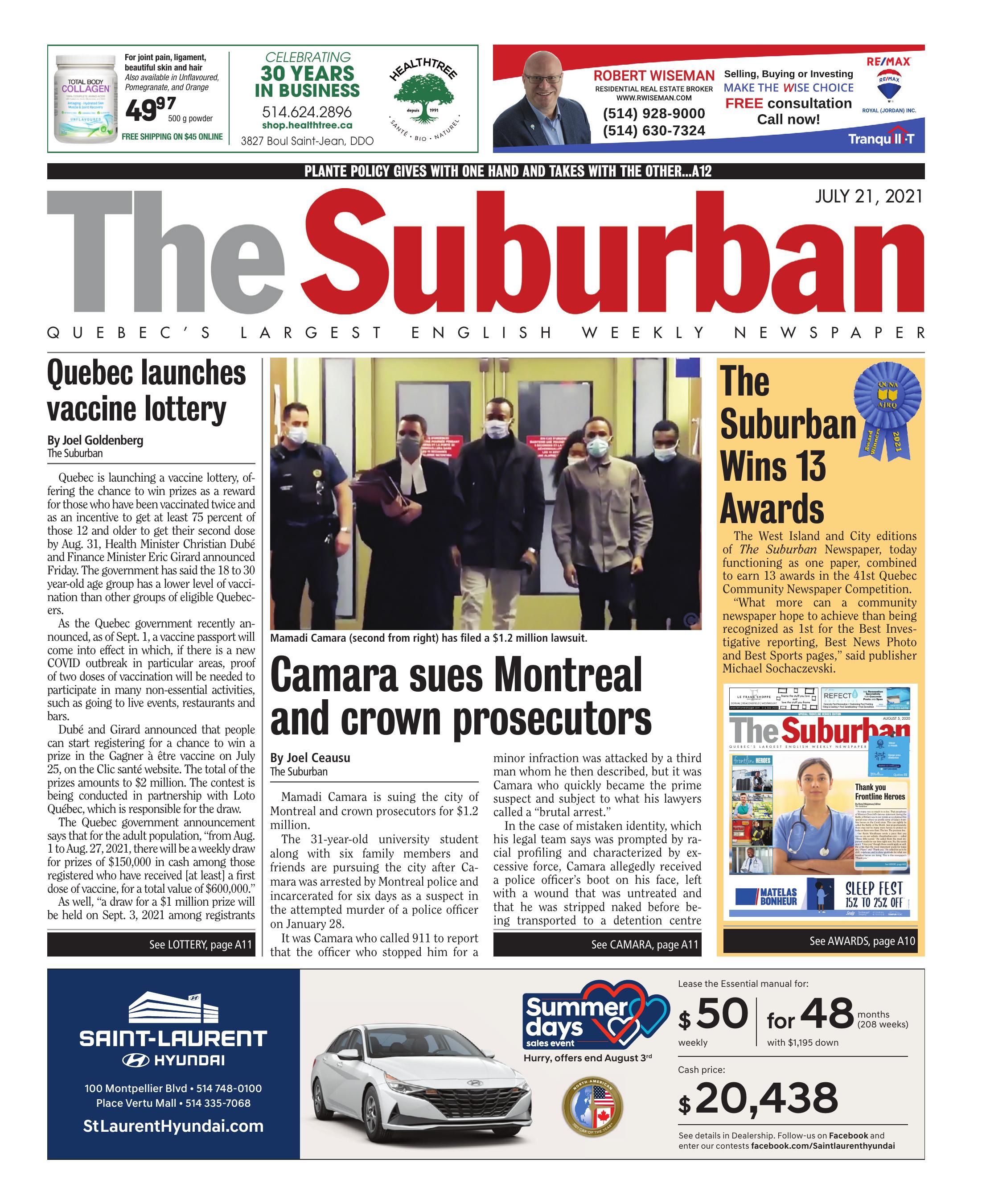 Mamadi Camara (second from right) has filed a $1.2 million lawsuit.

Mamadi Camara is suing the city of Montreal and crown prosecutors for $1.2 million.

The 31-year-old university student along with six family members and friends are pursuing the city after Camara was arrested by Montreal police and incarcerated for six days as a suspect in the attempted murder of a police officer on January 28.

It was Camara who called 911 to report that the officer who stopped him for a minor infraction was attacked by a third man whom he then described, but it was Camara who quickly became the prime suspect and subject to what his lawyers called a “brutal arrest.”

In the case of mistaken identity, which his legal team says was prompted by racial profiling and characterized by excessive force, Camara allegedly received a police officer’s boot on his face, left with a wound that was untreated and that he was stripped naked before being transported to a detention centre and incarcerated for almost a week and identified as a cop killer and where he was viewed as “a monster,” Camara told Radio-Canada in a moving appearance on television in February.

After six days a video emerged showing his innocence and he was released, receiving a formal apology from SPVM Chief Sylvain Caron. Another suspect was arrested in Toronto in March.

Lawyers say the arrest and interrogation traumatized Camara, his pregnant wife, his neighbors, family members who were questioned extensively and say they bear heavy emotional scars from the ordeal and jeopardized his schooling and residence in Canada.

In February the Quebec government appointed a judge to look into the affair, with a report due next month.

Quebec is launching a vaccine lottery, offering the chance to win prizes as a reward for those who have been vaccinated twice and as an incentive to get at least 75 percent of those 12 and older to get their second dose by Aug. 31, Health Minister Christian Dubé and Finance Minister Eric Girard announced Friday. The government has said the 18 to 30 year-old age group has a lower level of vaccination than other groups of eligible Quebecers.

As the Quebec government recently announced, as of Sept. 1, a vaccine passport will come into effect in which, if there is a new COVID outbreak in particular areas, proof of two doses of vaccination will be needed to participate in many non-essential activities, such as going to live events, restaurants and bars.

Dubé and Girard announced that people can start registering for a chance to win a prize in the Gagner à être vaccine on July 25, on the Clic santé website. The total of the prizes amounts to $2 million. The contest is being conducted in partnership with Loto Québec, which is responsible for the draw.

As well, “a draw for a $1 million prize will be held on Sept. 3, 2021 among registrants who are [fully] vaccinated. The first dose must have been received before Aug. 3 and the second dose before Aug. 31 inclusive.”

“The vaccine competition is an initiative that will, on the one hand, maximize the vaccination rate in Quebec in all age groups and, on the other hand, promote the administration of the second dose before Aug. 31,” Dubé said. “Getting your second dose by Aug. 31, earlier than your appointment, is essential for optimal longer-term protection, especially against variants.”

Girard said that “today, we are adding an additional tool to stimulate some people who are a little more hesitant to get vaccinated.”

The government’s announcement points out that the rules for the lottery will be published in the days before the July 25 registration start date.

“To participate in the vaccine competition draws, people must register by visiting the vaccine proof portal (Clic Santé). To be valid, registration must be made no later than 11:59 p.m. the day before the draw. Note, however, that for the last draw, on Sept. 3, people must have received their second dose of vaccine AND have registered before Aug. 31 at 11:59 p.m.”

For those 12 to 17, “it is the parent or guardian who will register on the portal and consent to the participation of the minor in the scholarship draws.”

The Suburban was awarded for their coverage of the Herron tragedy

The West Island and City editions of The Suburban Newspaper, today functioning as one paper, combined to earn 13 awards in the 41st Quebec Community Newspaper Competition.

“What more can a community newspaper hope to achieve than being recognized as 1st for the Best Investigative reporting, Best News Photo and Best Sports pages,” said publisher Michael Sochaczevski.

“It is very gratifying to be recognized by our peers in so many varied and different categories, such as Best Editorial page, Best News Story, Best Feature Series and Best Column Writing,” said editor Beryl Wajsman.

Judge Ryan McDonald wrote, “The staff at The Suburban took its readers into the tragedy unfolding at the Herron through exclusive reporting. They painted a picture ……. during the pandemic.” Mr. Wajsman was also gratified to see newcomer Chelsey St. Pierre get recognized for Best Investigative Story and that the two of them shared an award for Best News Story.

Anthony Bonaparte continued his accumulation of awards again being recognized as among the Best cartoonists in the industry.

Mark Lidbetter, our esteemed Sports editor not only helped us win Best Sports pages, but was also personally recognized in the Best Feature Series for his coverage of what was happening to Amateur sports during the pandemic.

The Suburban team was very pleased that our Special Section tribute to the pandemic front line workers took second place. Editorial, Sales and Production all came together to make that a successful, important and well conceived section that will be treasured for years to come.

And what newspaper would be complete without an award for Best Ad and Best Ad Creation (small format). Judge Emily Griffoen wrote about Oliver Sutton’s creation, “The ad is bold, clear and values its audience.”

Yes we do! Thank you for your continued support and don’t forget to check us out on our new website at www.thesuburban.com.