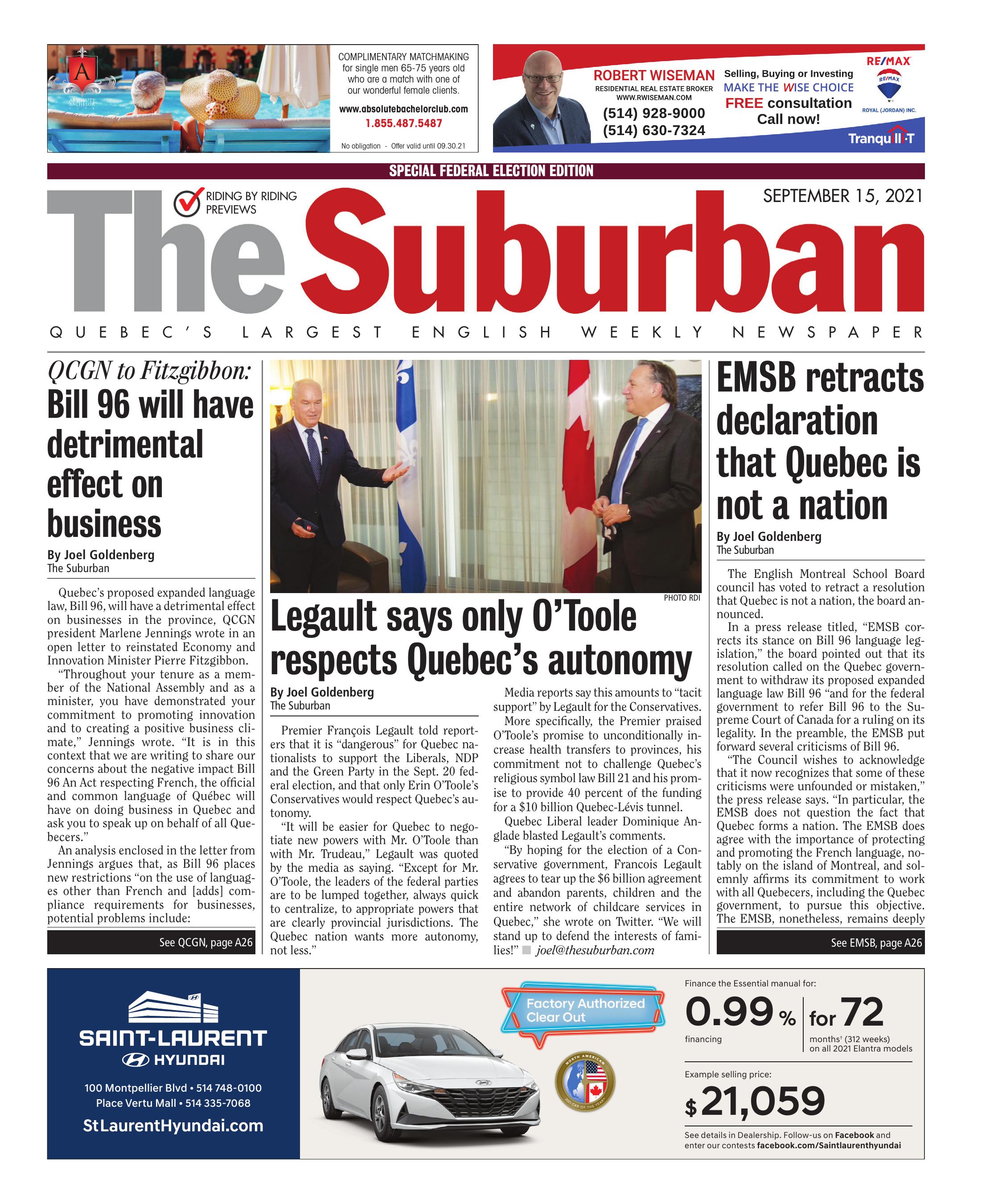 Premier François Legault told reporters that it is “dangerous” for Quebec nationalists to support the Liberals, NDP and the Green Party in the Sept. 20 federal election, and that only Erin O’Toole’s Conservatives would respect Quebec’s autonomy.

“It will be easier for Quebec to negotiate new powers with Mr. O’Toole than with Mr. Trudeau,” Legault was quoted by the media as saying. “Except for Mr. O’Toole, the leaders of the federal parties are to be lumped together, always quick to centralize, to appropriate powers that are clearly provincial jurisdictions. The Quebec nation wants more autonomy, not less.”

Media reports say this amounts to “tacit support” by Legault for the Conservatives.

More specifically, the Premier praised O’Toole’s promise to unconditionally increase health transfers to provinces, his commitment not to challenge Quebec’s religious symbol law Bill 21 and his promise to provide 40 percent of the funding for a $10 billion Quebec-Lévis tunnel.

“By hoping for the election of a Conservative government, Francois Legault agrees to tear up the $6 billion agreement and abandon parents, children and the entire network of childcare services in Quebec,” she wrote on Twitter. “We will stand up to defend the interests of families!”

Quebec’s proposed expanded language law, Bill 96, will have a detrimental effect on businesses in the province, QCGN president Marlene Jennings wrote in an open letter to reinstated Economy and Innovation Minister Pierre Fitzgibbon.

“Throughout your tenure as a member of the National Assembly and as a minister, you have demonstrated your commitment to promoting innovation and to creating a positive business climate,” Jennings wrote. “It is in this context that we are writing to share our concerns about the negative impact Bill 96 An Act respecting French, the official and common language of Québec will have on doing business in Quebec and ask you to speak up on behalf of all Quebecers.”

An analysis enclosed in the letter from Jennings argues that, as Bill 96 places new restrictions “on the use of languages other than French and [adds] compliance requirements for businesses, potential problems include:

• “Significantly increasing the amount of red-tape and administrative costs faced by small and medium sized businesses already suffering from the economic effects of the pandemic.”

• Restricting “the ability of employers to require knowledge of a language other than French for hiring and promotion, which could have a detrimental impact on their capacity to compete in markets outside Quebec.”

• Making it harder for “businesses to make and enforce contracts due to the need to provide court documents in French, which will lead to delays in accessing justice and discourage businesses from investing in Quebec.”

• Severely impacting “the ability of Quebec to attract, recruit and retain world-class talent because of limitations on access to English schools and to government services in English.”

• An increased risk for Quebec enterprises “in the face of strengthened and unsupervised search powers provided to the Office Québécois de la Langue Française, and the new and strengthened penalties associated with non-compliance with the Charter of the French Language.”

“In effect, businesses – like all legal persons – will have no judicial recourse to challenge the application of the Charter of the French Language— as amended by Bill 96) — in cases where they feel their rights have been violated.”

The English Montreal School Board council has voted to retract a resolution that Quebec is not a nation, the board announced.

In a press release titled, “EMSB corrects its stance on Bill 96 language legislation,” the board pointed out that its resolution called on the Quebec government to withdraw its proposed expanded language law Bill 96 “and for the federal government to refer Bill 96 to the Supreme Court of Canada for a ruling on its legality. In the preamble, the EMSB put forward several criticisms of Bill 96.

“The Council wishes to acknowledge that it now recognizes that some of these criticisms were unfounded or mistaken,” the press release says. “In particular, the EMSB does not question the fact that Quebec forms a nation. The EMSB does agree with the importance of protecting and promoting the French language, notably on the island of Montreal, and solemnly affirms its commitment to work with all Quebecers, including the Quebec government, to pursue this objective. The EMSB, nonetheless, remains deeply concerned with how Bill 96 will impact Quebec’s English-language community.”

The EMSB added that its new resolution “remains very critical of the attempt to shield judicial scrutiny by introducing the notwithstanding clause in Bill 96 and still calls on the Quebec government to withdraw the legislation in its present form.”

EMSB chairman Joe Ortona was dismissed as an Ensemble Montréal candidate because of the original EMSB declaration Quebec is not a nation.

Simon Jolin-Barrette, minister responsible for the French language, has released a statement saying “the damage has already been done. The comments made by EMSB last week were contemptuous and unacceptable. Quebec bashing has no place and must stop.”