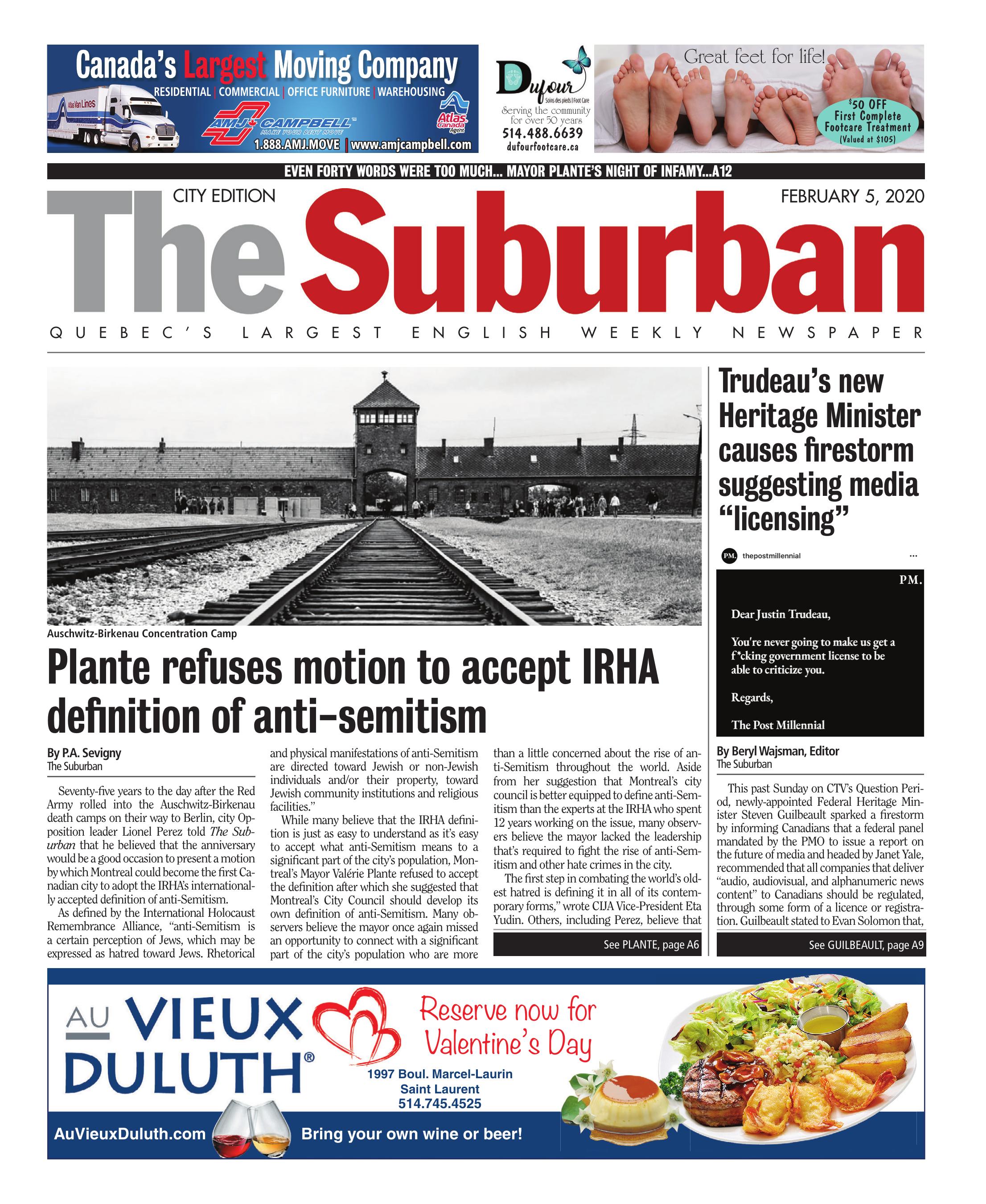 Seventy-five years to the day after the Red Army rolled into the Auschwitz-Birkenau death camps on their way to Berlin, city Opposition leader Lionel Perez told The Suburban that he believed that the anniversary would be a good occasion to present a motion by which Montreal could become the first Canadian city to adopt the IRHA’s internationally accepted definition of anti-Semitism.

As defined by the International Holocaust Remembrance Alliance, “anti-Semitism is a certain perception of Jews, which may be expressed as hatred toward Jews. Rhetorical and physical manifestations of anti-Semitism are directed toward Jewish or non-Jewish individuals and/or their property, toward Jewish community institutions and religious facilities.”

While many believe that the IRHA definition is just as easy to understand as it’s easy to accept what anti-Semitism means to a significant part of the city’s population, Montreal’s Mayor Valérie Plante refused to accept the definition after which she suggested that Montreal’s City Council should develop its own definition of anti-Semitism. Many observers believe the mayor once again missed an opportunity to connect with a significant part of the city’s population who are more than a little concerned about the rise of anti-Semitism throughout the world. Aside from her suggestion that Montreal’s city council is better equipped to define anti-Semitism than the experts at the IRHA who spent 12 years working on the issue, many observers believe the mayor lacked the leadership that’s required to fight the rise of anti-Semitism and other hate crimes in the city.

The first step in combating the world’s oldest hatred is defining it in all of its contemporary forms,” wrote CIJA Vice-President Eta Yudin. Others, including Perez, believe that the IRHA definition could have become a useful tool by which the city could establish a critical baseline to carry on their fight against racism, hate crimes and assorted hate-related criminal activity.

“Of course we need to remember what happened during the Holocaust,” said Perez, “but as elected officials, we must act to see that it never happens again.” The same night Plante rejected the motion, the city of Vaughan, Ontario under the leadership of Mayor Maurizio Bevilacqua passed a similar resolution. Toronto had already designated January 27th as an official Holocaust Remembrance Day.

The Centre for Israel and Jewish Affairs (CIJA) has launched a petition to combat anti-Semitism in Montreal. The petition, which can be viewed at cija.ca/ihra-montreal, is referred to as a “call to action” to have Mayor Plante adopt the IHRA working definition of anti-Semitism, which she refused to do at council. “We know that anti-Semitism has been rising across Canada, including right here in Montreal,” the CIJA statement says. “We also know that the first step in combating anti-Semitism is to define it. Montreal’s Mayor had the opportunity to take this important first step on Tuesday, January 27, but failed to do so.”The statement also points out that the IHRA definition has been adopted by countries and cities around the world, “including in London, UK, Vaughan, ON (on the same night Plante rjected it), and by the Government of Canada.The CIJA statement also says, “Suggesting that city council is better equipped to define anti-Semitism than the Jewish community is ludicrous. We are asking for your help to let the Mayor know that you want city council to reverse this decision, and adopt the IHRA definition. Join us in telling Mayor Plante that combating anti-Semitism is important to you!”

This past Sunday on CTV’s Question Period, newly-appointed Federal Heritage Minister Steven Guilbeault sparked a firestorm by informing Canadians that a federal panel mandated by the PMO to issue a report on the future of media and headed by Janet Yale, recommended that all companies that deliver “audio, audiovisual, and alphanumeric news content” to Canadians should be regulated, through some form of a licence or registration. Guilbeault stated to Evan Solomon that, “If you’re a distributor of content in Canada and obviously if you’re a very small media organization the requirement probably wouldn’t be the same if you’re Facebook, or Google. There would have to be some proportionality embedded into this, but we would ask that they have a license, yes.” Those last ten words unleashed the torrent of opposition.

When asked what the “media content” meant precisely, Guilbeault said “...the important answer is not what my definition is, but in the report, they refer to media as anyone who produces content, and then they say that for news agencies, there will be no licensing required.”

The backlash over Guilbeault’s comments and the Yale Report is coming from media circles as well as political ones and is being fed by a deep suspicion — particularly in digital media — that the federal government will attempt to implement the Report’s media constraints just as the Quebec government tried to with the Payette Report until The Suburban led the successful fight against it. Montreal’s Matthew Azrieli, the Publisher of the online Post-Millenial, scathingly reflected the fears and frustrations of many with the illustration accompanying this story that the Post-Millenial put up on social media.

Speaking to The Suburban, Azrieli said,”In only two and a half years, The Post Millennial has acquired a minimum monthly audience of over 3,000,000 unique users. Over 80% of our audience is Canadian. We have grown so much in such little time because we have stood almost alone in Canadian digital media as one of the few online outlets representing any perspective other than the mainstream Liberal Party narrative. We tell the stories that establishment media outlets simply don’t tell. Assume, for a moment, that The Post Millennial cannot acquire a license due to our paper’s editorial stance. The bulwark of our readers live in small, rural communities in Ontario, Saskatchewan, Alberta, and British Columbia. The local papers of these towns have been shuttered and closed down. The resources that the federal government should have given to these local outlets were instead diverted to established media entities in Toronto and Montreal. The feeling of “Western alienation” is very real for these communities.”

Azrieli comtinued, “What would happen if the Trudeau government deemed the only credible news source they have unworthy of licensing? We are committed to standing for all Canadians and presenting the news without government interference.”

Monday morning Guilbeault attempted to walk back his Sunday remarks, but that brought only more confusion and condemnation. Guilbeault stated that the report’s licensing recommendation wouldn’t apply to news media outlets and that he was referring to outlets that produce and distribute content. He said, “The word “media” can be confusing, I recognize that, because the report talks about media, but not necessarily in the sense of news agencies and maybe the confusion comes from there.”

Conservative leader Andrew Scheer led off Question Period on Monday stating, “George Orwell’s ‘1984’ was supposed to be a cautionary tale about the evils of big government, not an instruction manual for this Prime Minister. Trudeau answered, “I want to be unequivocal. We will not impose licensing requirements on news organizations, nor will we regulate news content.”

Conservative MP Michelle Rempel Garner, who is her party’s industry and economic development critic, said it was unacceptable that Guilbeault suggested he needed to clarify the government’s position on account of public confusion. She said that more concrete clarity is necessary about the Liberals’ position. “I think that the government has to be very clear about one thing: that the role of the state is to not interfere in people’s rights.”

Appearing on CTV’s “Power Play” Monday , Guilbeault said that when it comes to what qualifies as a news organization, “the government is not in the business of deciding that.” He tried to walk back his Sunday comments again saying the government,”..has no intention to impose licensing requirements on news organizations, nor would we try to regulate news content. We are committed to a free and independent press, which is essential to our democracy.”

Rempel Garner later also appeared on CTV’s Power Play and called Guilbeault’s interview on the same show “a trainwreck.” She pointedly said, “He couldn’t even define what news meant in regards to new regulation.” NDP MP Heather McPherson also expressed concerns on Power Play, saying Guilbeault’s clarification had been “opaque, at best.” She emphasized that,”All Canadians need to know that we have a free and independent press.”