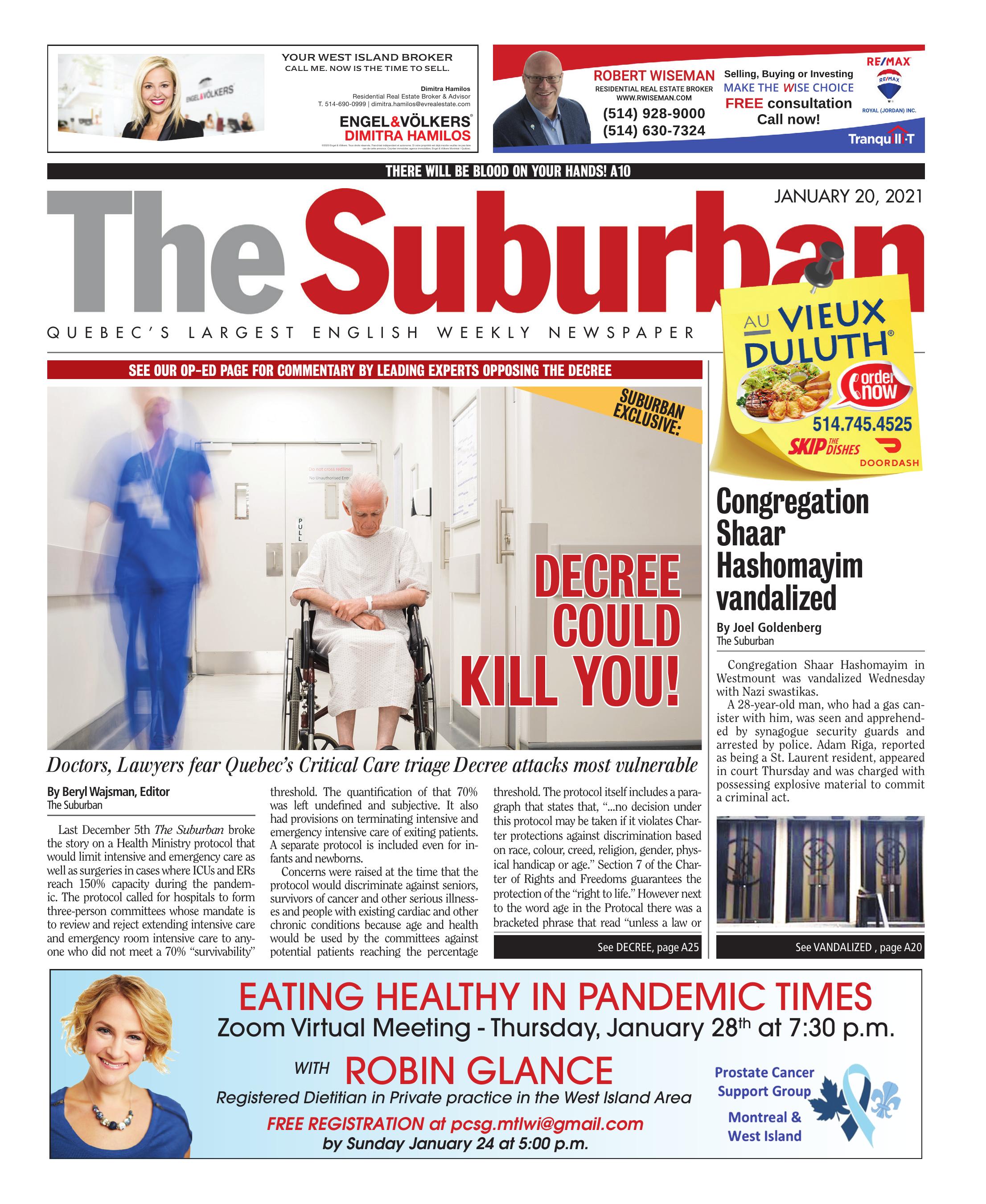 Concerns were raised at the time that the protocol would discriminate against seniors, survivors of cancer and other serious illnesses and people with existing cardiac and other chronic conditions because age and health would be used by the committees against potential patients reaching the percentage threshold. The protocol itself includes a paragraph that states that, “...no decision under this protocol may be taken if it violates Charter protections against discrimination based on race, colour, creed, religion, gender, physical handicap or age.” Section 7 of the Charter of Rights and Freedoms guarantees the protection of the “right to life.” However next to the word age in the Protocal there was a bracketed phrase that read “unless a law or regulation allows it.” At the time many legal experts warned that the “survivability” percentage though not an overt discrimination based on age amounted to the same thing because with age come infirmities that would inevitability hold seniors below the required threshold and the Protocol was a covert age-based discriminatory document.

But as long as the Protocol retained its status as a guideline document leaving final decisions to attending physicians, health care accessibility was unaffected. All that changed last Wednesday. After press time, The Suburban received a call from a reliable and senior source in the Montreal medical community about a virtual meeting that had been held at the MUHC. The meeting included doctors representing the various constituent hospitals of the MUHC and was reportedly directed by senior members of the MUHC’s medical management. The latter informed the assembled that the MUHC had begun implementing some of the Protocol including training the three person committees and doing simulation triage on patient admissions and exclusions. The attendees were also informed that the MUHC expected the other hospitals to follow suit. The Suburban source reported that objections were raised immediately both on grounds of conscience and lack of necessity. The MUHC representatives’ answer was that preparation was necessary because the Protocol may soon be mandatory through the force of Ministerial Decree to be signed possibly in the next few weeks by the Quebec Minister of Justice. In no other western industrialized jurisdiction has the state mandated forced limits on access to critical care — nor withdrawal of that care.

Dr. François Marquis, Director of Intensive Care at Maisonneuve-Rosemont, was first out of the gate with his concerns saying on CTV that, “I was not raised for this nor trained for this. I will not be someone who would pull out a breathing tube.”

Dr. Peter Goldberg, MUHC Director of Critical Care, told The Gazette on Tuesday night that, “...this is something that is out of The Twilight Zone. I see real dangers in this, not only in that we are going to be asked to discontinue patients who would have otherwise been allowed to continue, but about the long-term effect of the trust between the community and healthcare providers after all this is over. I’m very concerned about whether we’ll ever regain that trust, even though people will know the government mandated it. I’m not sure if our patients will ever look at us the same way anymore.”

Dr. Paul Saba of Lachine Hospital (St. Joseph’s) and President of Physicians for Social Justice told The Suburban that, “This is unconscionable, unethical and unnecessary. We have the resources. The government claims this is necessary because of a shortage of nurses. Then call on the army as it did for seniors residences. Patients who are the most ill and require the most care are admitted to the ICU. Under this protocol everything is turned upside down. The sickest are blocked access to critical care beds and replaced by the healthiest. This goes against all medical ethics. The protocol also encourages abandoning those who are longer than 21 days on a ventilator and not showing clinical signs of improvement. If this protocol had been invoked a few years ago, both my patient Shirley who was in her 40s and my father-in-law who was 70 would no longer be alive today. Both were on ventilators for three or more weeks. Furthermore, a protocol for ICU access for children and newborns is included in a separate set of directives. My daughter Jessica who was born with a severe cardiac abnormality, spent weeks in the neonatal care unit of the Montreal Children’s Hospital. Given the severity of her condition, she might not have made it into the neonatal ICU with this scoring system. After amazing medical care, she is now a thriving 11-year-old.”

Brigitte Brabant, an attorney specializing in Health Law and Ethics and attorney Nathalie Johnson wrote in Le Devoir in an opinion piece you can read in full on The Suburban‘s oped page, “In maximizing the use of resources at the expense of individual patients’ rights, these protocols would represent a fundamental reversal of the universal and egalitarian approach that currently prevails in our health care system. The individual’s right to receive medically necessary care would be subordinated to the “common good.” Though it is mentioned in these protocols that they should not be applied in a discriminatory manner, this will nevertheless be the case. In fact, those excluded from care (as a result of a determination that they won’t be able to recover as quickly as others) will, for the most part, be individuals in vulnerable conditions due to their age, their disability, their chronic illness, or their lack of home support or financial means. In this respect, it should be remembered that it isn’t because a norm or rule is based on scientific criteria that it isn’t discriminatory. It is not too late to avoid the worst injustices and, above all, the erosion of the principle of universal access to health care.”

The Suburban reached out to sources in the Quebec government on whether a Decree was imminent, the answers were noncommittal other than that our concerns were “noted.” The Suburban offered to print any position statement the MUHC might have on this issue but none has been forthcoming by press time. What has critics concerned however was former director of the MUHC Centre for Applied Ethics Dr. Eugene Bereza’s appearance on CTV last Wednesday. He said, “What we’re saying is people, the elderly, who have had their life to live, so to speak, will be less prioritized than someone in their twenties, who haven’t had an opportunity to go through those life cycles.” Under the Canadian and Quebec Charters that statement would be a violation of the protection against age discrimination. When anchor Mitsumi Takahashi asked Bereza what would happen if a doctor conscientiously objected to “pulling the plug.” Bereza answered, “Well, doctors have a right to object, but then we’ll just have to find one who doesn’t.”

The vandalism at the Shaar Hashomayim.

A 28-year-old man, who had a gas canister with him, was seen and apprehended by synagogue security guards and arrested by police. Adam Riga, reported as being a St. Laurent resident, appeared in court Thursday and was charged with possessing explosive material to commit a criminal act.

Ville-Marie—Le Sud-Ouest—Île-des-Soeurs MP Marc Miller condemned the attack. “The desecration of Montreal’s Shaar Hashomayim with the most vile and abhorrent symbol of evil and hate is an utter disgrace,” he wrote on Twitter. “I ask all Canadians to stand with Shaar Hashomayin and members of the Jewish faith as we condemn this act that has no place in this country!”

Mount Royal MP Anthony Housefather also condemned the attack.”This is a disgraceful anti-Semitic act.” he wrote. “Let’s join together as a Montreal, Quebec and Canadian community to denounce it and stand with Shaar Hashomayim members and the Jewish community.”

“The Jewish community is outraged by today’s vile assault on Congregation Shaar Hashomayim in Westmount,” says a statement from Federation CJA. “This attack targets the entire community and all those who embrace civility and tolerance.”

Richard Marceau, the former BQ MP who converted to Judaism in 2004, reacted as well. “My friend Rabbi Adam Scheier’s synagogue was vandalized today,” he wrote. “When I am in Montreal for Shabbat, this is usually where I go to pray. Think of the message sent to the entire Jewish community, to see Nazi symbols on a house of worship.”

“This incident is another jarring reminder of the constant need for vigilance in protecting our Jewish communal institutions,” said Michael Mostyn, Chief Executive Officer of B’nai Brith Canada. “Antisemitism can rear its ugly head anywhere and any time, and we must always do our part to combat it when it does.”

“B’nai Brith will be following up with the Montreal Hate Crimes Unit and those affected, to do whatever we can to ensure that justice is served in this case,” said Harvey Levine, B’nai Brith’s Quebec Regional Director.

Westmount Mayor Christina Smith commented that “all of us on City Council and all Westmounters were shocked and outraged to learn that an act against the Jewish community took place this afternoon at the Congregation Shaar Hashomayim. This is a symbol of hatred, which has no place in this or any other community.

“This anti-Semitic act is against our fundamental values and beliefs. We are an inclusive and tolerant city and we are proud of that. On behalf of the City of Westmount, I want to assure members of the congregation and the entire Jewish community that we are committed to working with them to combat hatred and to build bridges of understanding and solidarity between neighbours of all backgrounds.”