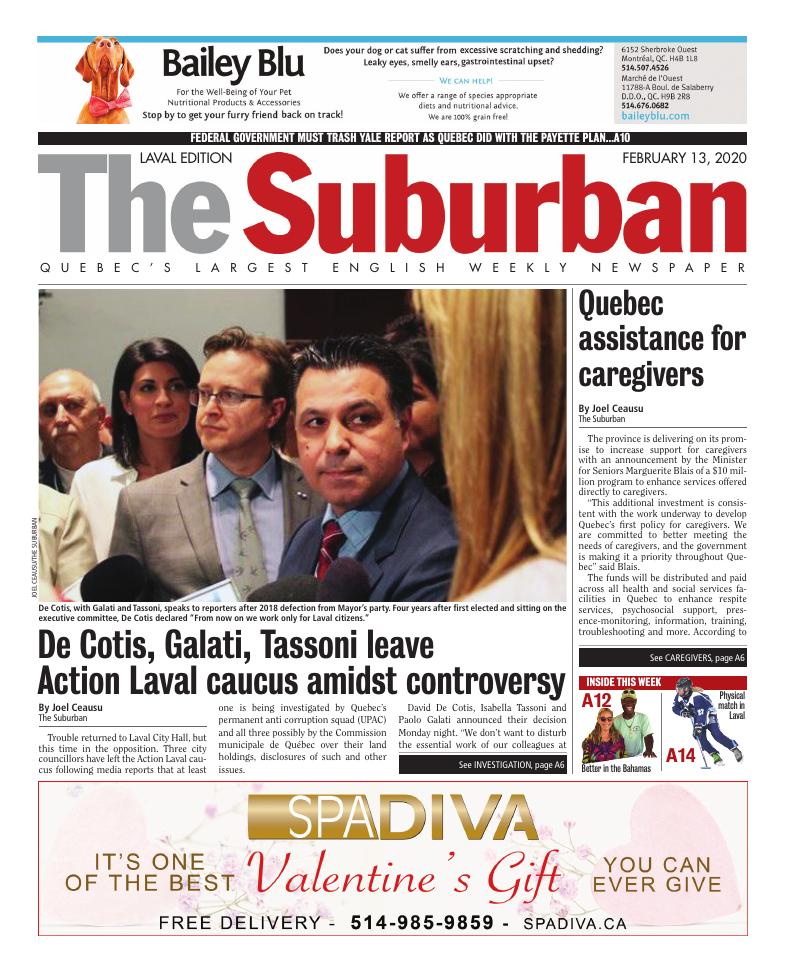 De Cotis seen with with Galati and Tassoni in 2018, says allegations are false.

Trouble returned to Laval City Hall, but this time in the opposition. Three city councillors have left the Action Laval caucus following media reports that at least one is being investigated by Quebec’s permanent anti corruption squad (UPAC) and all three possibly by the Commission municipale de Québec over their land holdings, disclosures of such and other issues.

David De Cotis, Isabella Tassoni and Paolo Galati announced their decision Monday night. “We don’t want to disturb the essential work of our colleagues at City Council” the three said in a joint statement. “That’s why as of now we are withdrawing from the caucus and we will collaborate with different bodies to shed light on this situation.”

Party leader Achille Cifelli said in that statement that “Action Laval is an honest party comprised of hundreds of men and women working for the good of Laval residents. It’s very important to take the necessary time to shed light on all these allegations and that’s why I accepted the decision.” He added that neither he nor any member of Action Laval will further comment on ongoing investigations.

UPAC will not confirm whether they are investigating the trio, as is their normal practice, but the investigation allegedly began with a complaint to Laval’s Bureau of ethics and integrity BIEL.

The move comes following revelations in a Journal de Montréal story and other media about Saint-Bruno councillor De Cotis’ and Laval-des-Rapides councillor Tassoni’s ownership of land in Laval that was not disclosed as per obligations of elected officials, as well as related issues, including development and city dealings with said properties. Galati’s interests in a real estate investment company were also mentioned in the report as having not been disclosed. According to the reports, all three have said the matter is one of simple mistakes, omissions or ignorance of requirements.

In response, Mayor Marc Demers commented on Facebook that “In a city council, it is essential that everyone commits to combatting ethical violations. This is why many trainings, presentations and instructions are given to elected officials, so that everyone can respect their obligations.” Demers reiterated that he was troubled by the affair, given Laval’s past mired in corruption scandals. “I hope that the actions of some individuals will not detract from the tremendous work done by the city over the past six years to restore the reputation of the City of Laval.”

Official Opposition leader Michel Trottier and Fabreville’s Claude Larochelle said the news was “disturbing and shocking,” calling it “a troubling situation that once again tarnishes the image of municipal politics in Laval… When it’s not Demers, it’s his exes who put us in the headlines for the wrong reasons,” said Trottier, who wasn’t buying simple omissions as an excuse. “The omissions made by Tassoni, Galati and De Cotis are not trivial. Every year, elected officials have the obligation to declare their pecuniary interests in order to prevent any potential conflict of interest and to ensure a certain transparency towards the city. There’s a limit to taking the people of Laval for fools.”

De Cotis founded Mouvement Lavallois Équipe Marc Demers, and in 2018 led a faction of 10 city councillors away from the party he founded, alleging Demers’ lack of respect for democracy and heavy-handed rule at council, eventually joining with lone Action Laval councillor Aglaia Revelakis. Tassoni is a first-term councillor elected with ML, and Galati is formerly of Action Laval, then Mouvement Lavallois, then independent and then Action Laval again before his withdrawal this week, and is currently chair of the Sir Wilfrid Laurier School Board.

The SWL board, which has numerous dealings concerning property and land with municipalities it serves, says it will not comment on the reports given the allegations “do not involve our school board.”

City_news
Quebec assistance for caregivers
By Joel Ceausu The Suburban

The province is delivering on its promise to increase support for caregivers with an announcement by the Minister for Seniors Marguerite Blais of a $10 million program to enhance services offered directly to caregivers.

“This additional investment is consistent with the work underway to develop Quebec’s first policy for caregivers," said Blais. "We are committed to better meeting the needs of caregivers, and the government is making it a priority throughout Quebec."

The funds will be distributed and paid across all health and social services facilities in Quebec to enhance respite services, psychosocial support, presence-monitoring, information, training, troubleshooting and more. According to a government statement, in Quebec, one-quarter of the population aged 15 and over, or some 1,675,000 people, is considered a close caregiver.

In Laval, Sainte-Rose MNA Christopher Skeete called it great news that will “help increase the various services available to people in our region who are dedicated to caring for a loved one. I am very sensitive to their situation. Our government is committed to making a real difference in the quality of life for caregivers, and this announcement demonstrates that we are acting.”

The new policy will be finalized in the spring and will be followed by an inter-departmental government action plan that includes concrete and diverse measures to ensure an appropriate response to caregiver needs. 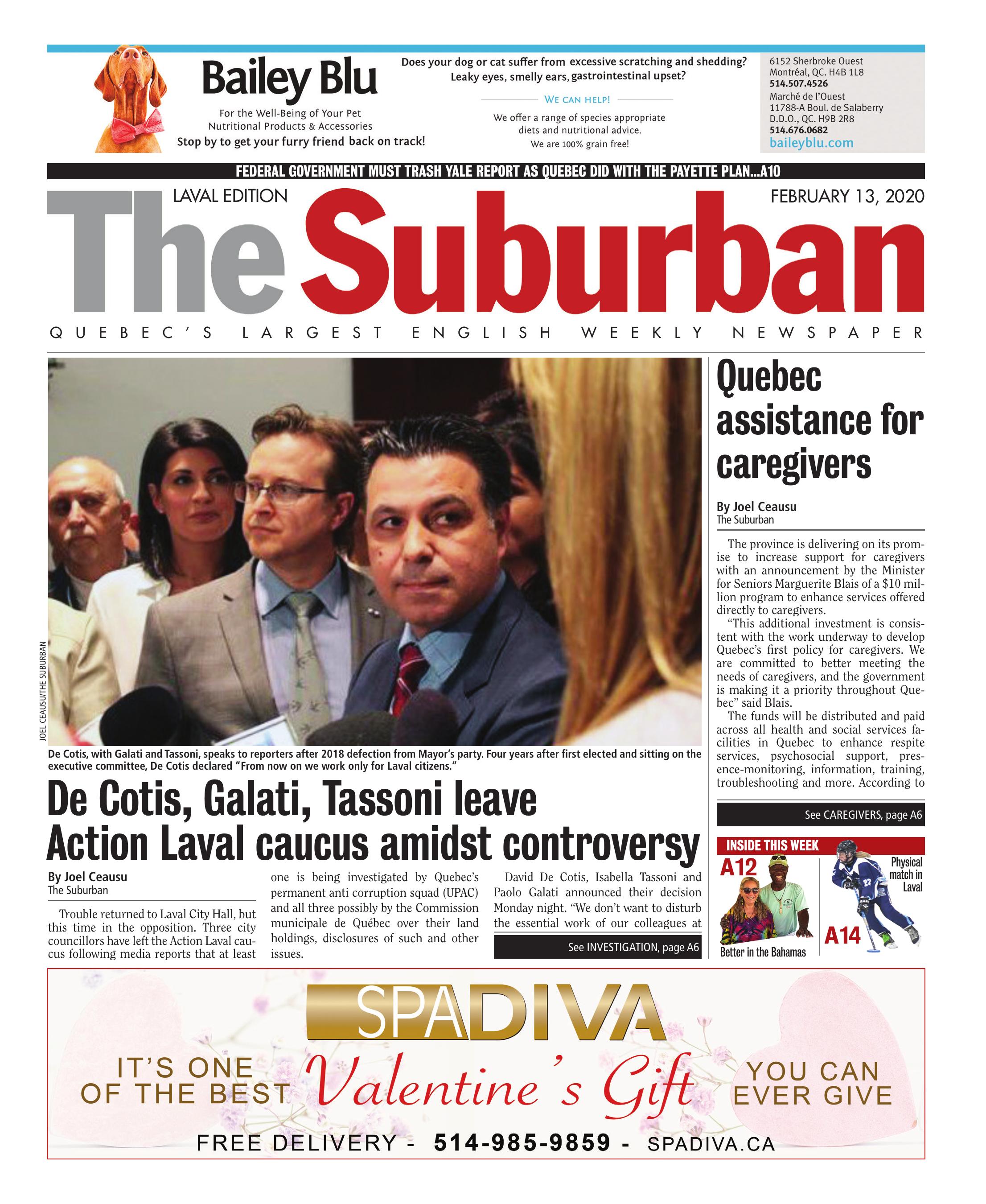