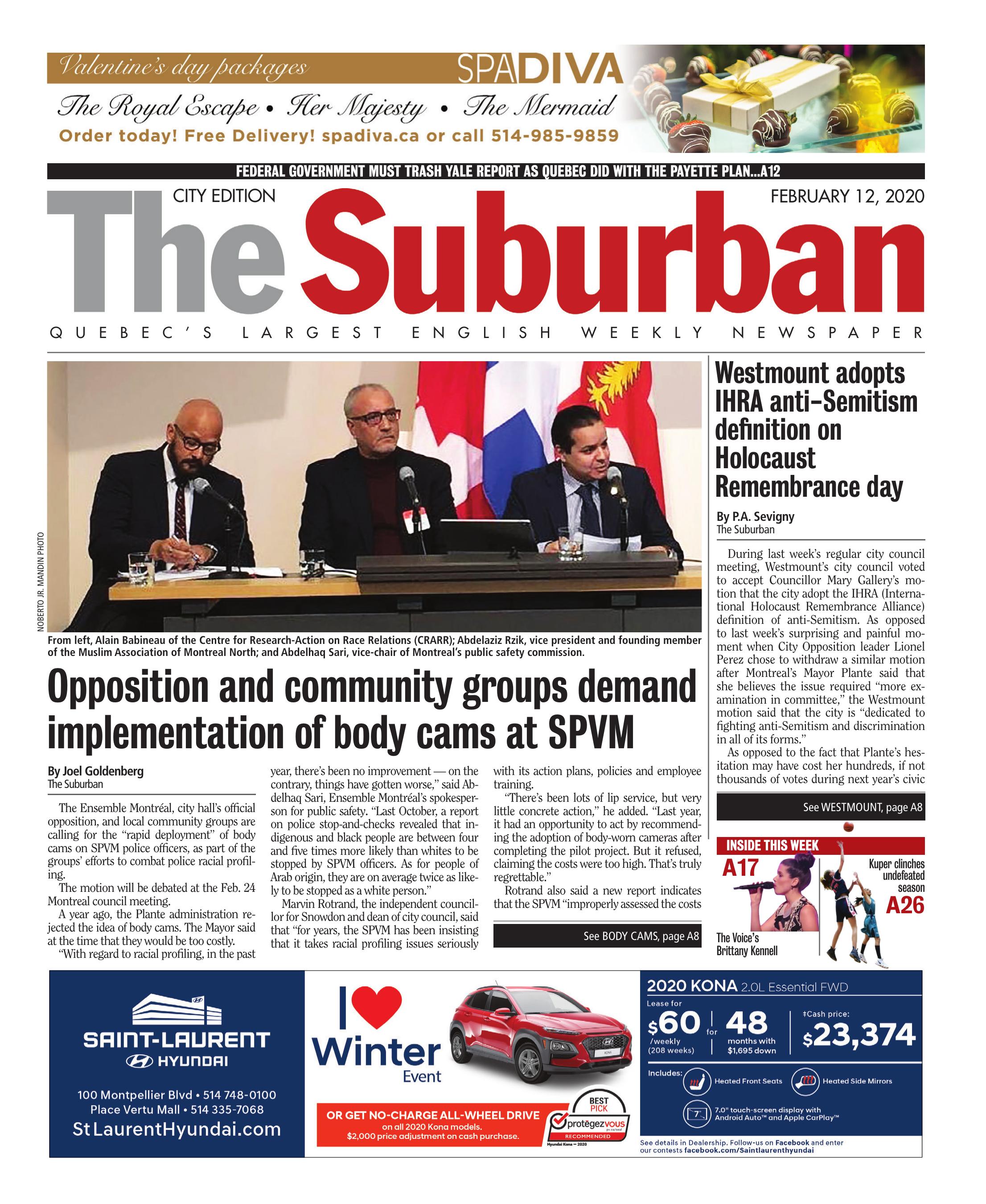 From left, Alain Babineau of the Centre for Research-Action on Race Relations (CRARR); Abdelaziz Rzik, vice president and founding member of the Muslim Association of Montreal North; and Abdelhaq Sari, vice-chair of Montreal’s public safety commission.

The Ensemble Montréal, city hall’s official opposition, and local community groups are calling for the “rapid deployment” of body cams on SPVM police officers, as part of the groups’ efforts to combat police racial profiling.

The motion will be debated at the Feb. 24 Montreal council meeting.

A year ago, the Plante administration rejected the idea of body cams. The Mayor said at the time that they would be too costly.

“With regard to racial profiling, in the past year, there’s been no improvement — on the contrary, things have gotten worse,” said Abdelhaq Sari, Ensemble Montréal’s spokesperson for public safety. “Last October, a report on police stop-and-checks revealed that indigenous and black people are between four and five times more likely than whites to be stopped by SPVM officers. As for people of Arab origin, they are on average twice as likely to be stopped as a white person.”

Marvin Rotrand, the independent councillor for Snowdon and dean of city council, said that “for years, the SPVM has been insisting that it takes racial profiling issues seriously with its action plans, policies and employee training.

“There’s been lots of lip service, but very little concrete action,” he added. “Last year, it had an opportunity to act by recommending the adoption of body-worn cameras after completing the pilot project. But it refused, claiming the costs were too high. That’s truly regrettable.”

Rotrand also said a new report indicates that the SPVM “improperly assessed the costs of the project as well as the impact of body cams on public confidence.”

“According to the SPVM, it would cost $17.4 million to implement the technology, and $24 million per year in staff and management costs. These costs are excessive and reflect neither reality nor the many technologies on the market. For example, they chose the most expensive technology for video data storage, while other cities are doing it for much less with other technologies.”

Sari said the cameras “have proven their worth in other cities.

“They protect both the residents and the police. The captured video provides an additional tool to complement officers’ event reports, facilitates evidence sharing with Crown prosecutors, improves public perception of the role of police, and decreases vexatious and unfounded complaints against police officers. Our motion calls on the Plante administration to review its previous decision and authorize deployment of body cameras as fast as possible.”

The Ensemble Montréal motion is supported by many local groups that defend the rights of Montrealers “from diverse origins,” including the Centre for Research-Action on Race Relations (CRARR).

“What Montrealers tell us is that the issue of racial profiling is far from being resolved,” said Alain Babineau of CRARR. “We have to put the subject of body cams back on the table. Let’s not forget that the technology has greatly evolved since the pilot project ended in 2017. We are of the opinion that body cameras will protect both police and residents. It’s a win-win solution.

Abdelaziz Rzik, vice president and founding member of the Muslim Association of Montreal North and a member of the Arab communities’ SPVM oversight committee from 2008 to 2018, said his goal has “always been to combat profiling and enable mutual respect between police officers and the members of my community. Real action is required to enable us to work together — they must deploy these body cameras.”

During last week’s regular city council meeting, Westmount’s city council voted to accept Councillor Mary Gallery’s motion that the city adopt the IHRA (International Holocaust Remembrance Alliance) definition of anti-Semitism. As opposed to last week’s surprising and painful moment when City Opposition leader Lionel Perez chose to withdraw a similar motion after Montreal’s Mayor Plante said that she believes the issue required “more examination in committee,” the Westmount motion said that the city is “dedicated to fighting anti-Semitism and discrimination in all of its forms.”

As opposed to the fact that Plante’s hesitation may have cost her hundreds, if not thousands of votes during next year’s civic election, Westmount’s Mayor Christina Smith wrote that “on the occasion of (the) Auschwitz Liberation and International Holocaust Remembrance day, Westmount wanted to meaningfully commit itself to countering anti-Semitism today.”

While he continues to believe that the Holocaust began when people stopped paying attention to what was being said and done to German Jews on the street before Hitler opened the death camps, he also said that “as elected officials, we must act to see that it never happens again.”

Aside from the 31 nations (including Canada) that have already accepted the IHRA definition — Westmount is the second Canadian municipality – after Ontario’s Vaughan Township – to have accepted the IHRA definition as public policy. Toronto did adopt a motion last year that the city would mark January 27 as International Holocaust Remembrance Day as the United Nations does.