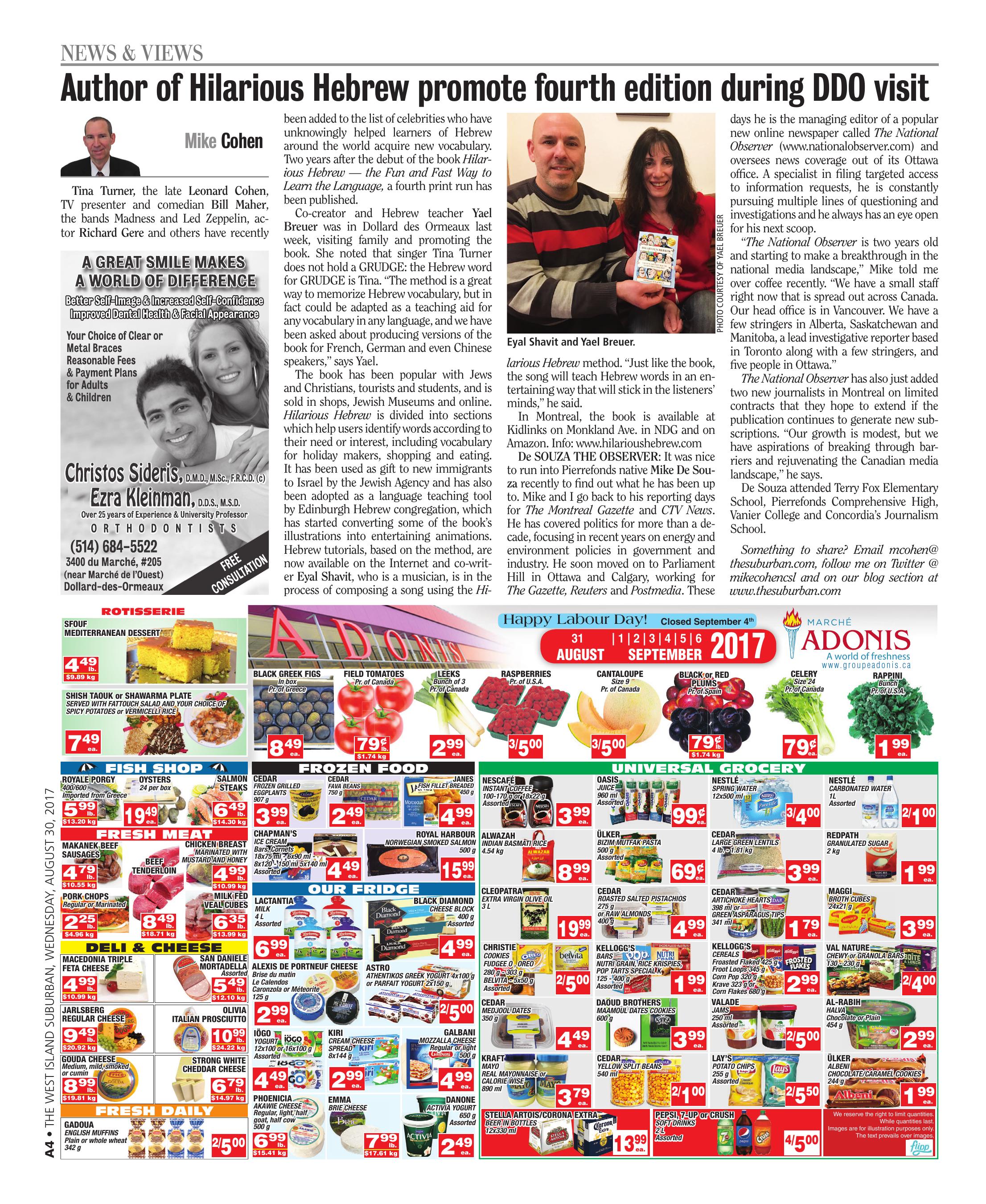 Tina Turner, the late Leonard Cohen, TV presenter and comedian Bill Maher, the bands Madness and Led Zeppelin, actor Richard Gere and others have recently been added to the list of celebrities who have unknowingly helped learners of Hebrew around the world acquire new vocabulary. Two years after the debut of the book Hilarious Hebrew — the Fun and Fast Way to Learn the Language, a fourth print run has been published.

Co-creator and Hebrew teacher Yael Breuer was in Dollard des Ormeaux last week, visiting family and promoting the book. She noted that singer Tina Turner does not hold a GRUDGE: the Hebrew word for GRUDGE is Tina. “The method is a great way to memorize Hebrew vocabulary, but in fact could be adapted as a teaching aid for any vocabulary in any language, and we have been asked about producing versions of the book for French, German and even Chinese speakers,” says Yael.

The book has been popular with Jews and Christians, tourists and students, and is sold in shops, Jewish Museums and online. Hilarious Hebrew is divided into sections which help users identify words according to their need or interest, including vocabulary for holiday makers, shopping and eating. It has been used as gift to new immigrants to Israel by the Jewish Agency and has also been adopted as a language teaching tool by Edinburgh Hebrew congregation, which has started converting some of the book’s illustrations into entertaining animations. Hebrew tutorials, based on the method, are now available on the Internet and co-writer Eyal Shavit, who is a musician, is in the process of composing a song using the Hilarious Hebrew method. “Just like the book, the song will teach Hebrew words in an entertaining way that will stick in the listeners’ minds,” he said.

In Montreal, the book is available at Kidlinks on Monkland Ave. in NDG and on Amazon. Info: www.hilarioushebrew.com

De SOUZA THE OBSERVER: It was nice to run into Pierrefonds native Mike De Souza recently to find out what he has been up to. Mike and I go back to his reporting days for The Montreal Gazette and CTV News. He has covered politics for more than a decade, focusing in recent years on energy and environment policies in government and industry. He soon moved on to Parliament Hill in Ottawa and Calgary, working for The Gazette, Reuters and Postmedia. These days he is the managing editor of a popular new online newspaper called The National Observer (www.nationalobserver.com) and oversees news coverage out of its Ottawa office. A specialist in filing targeted access to information requests, he is constantly pursuing multiple lines of questioning and investigations and he always has an eye open for his next scoop.

“The National Observer is two years old and starting to make a breakthrough in the national media landscape,” Mike told me over coffee recently. “We have a small staff right now that is spread out across Canada. Our head office is in Vancouver. We have a few stringers in Alberta, Saskatchewan and Manitoba, a lead investigative reporter based in Toronto along with a few stringers, and five people in Ottawa.”

The National Observer has also just added two new journalists in Montreal on limited contracts that they hope to extend if the publication continues to generate new subscriptions. “Our growth is modest, but we have aspirations of breaking through barriers and rejuvenating the Canadian media landscape,” he says.