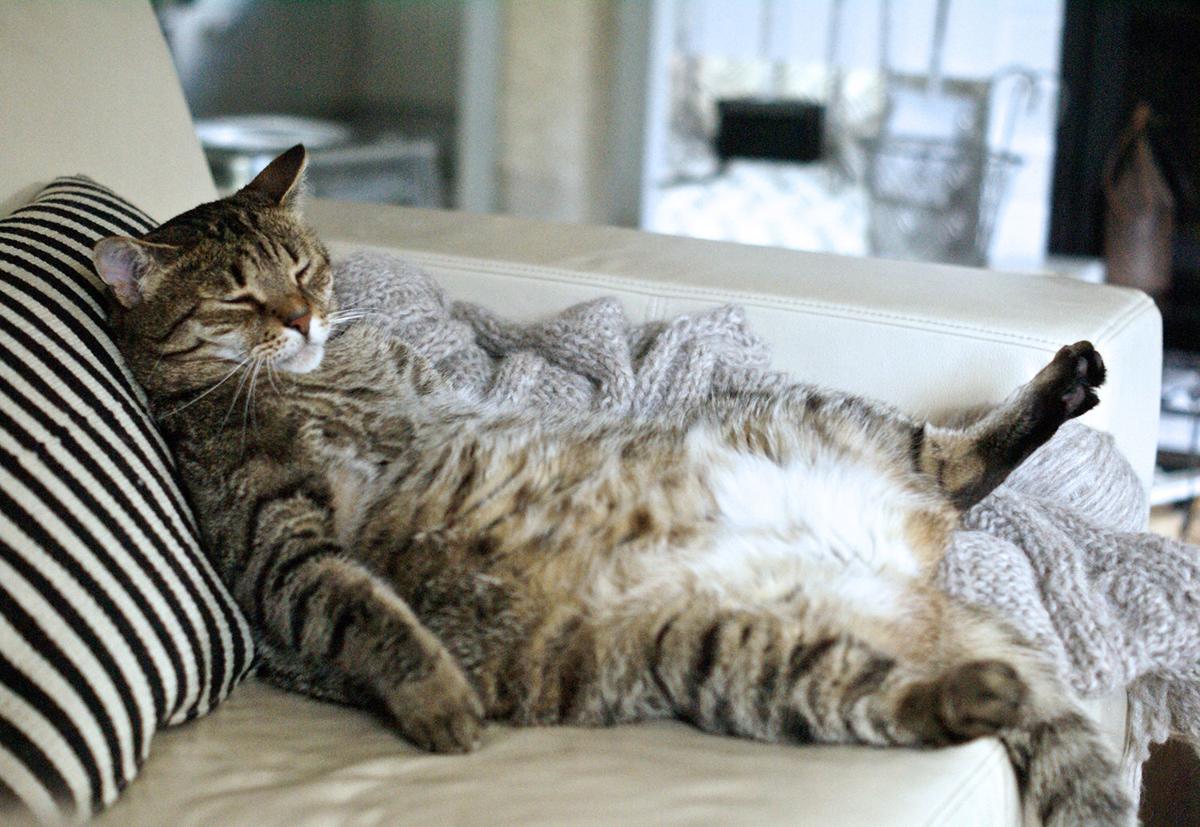 It’s hard to mistake this posture for anything other than being really chilled out, however truly relaxed doesn’t necessarily mean sleeping. 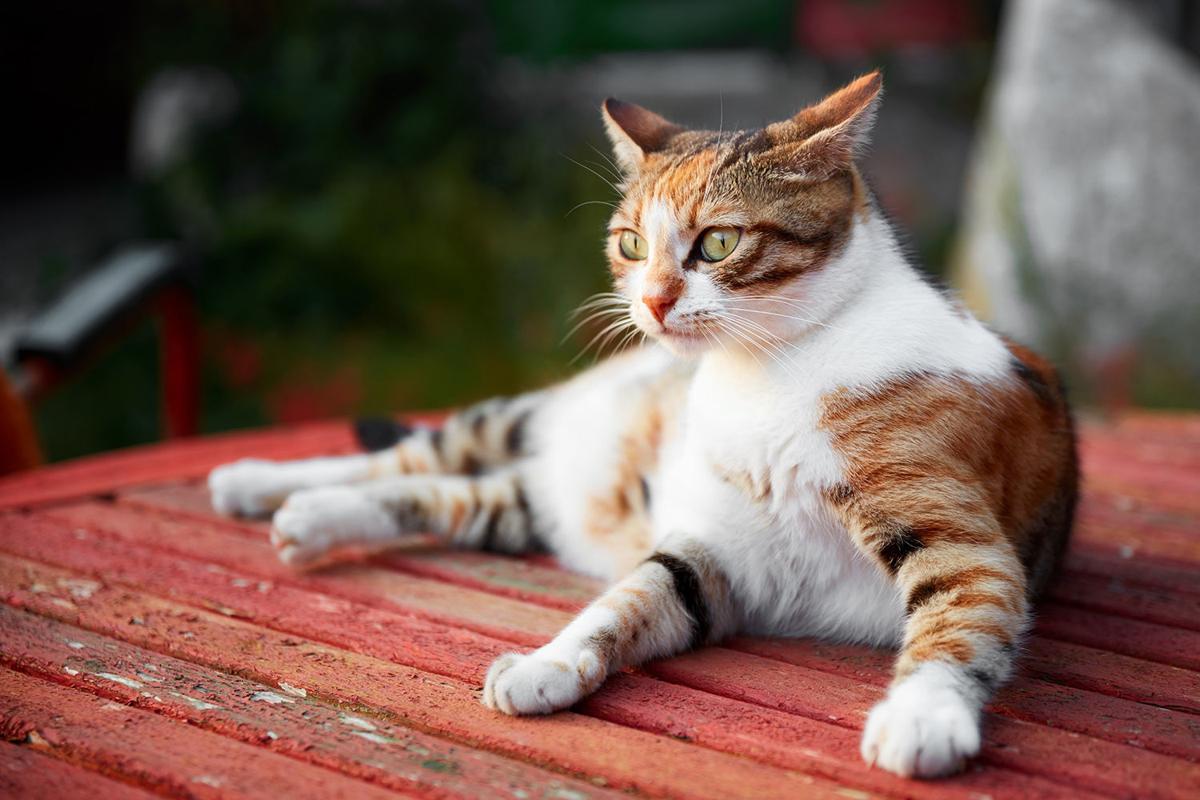 An alert cat may still be lying down but its head is upright and it almost looks like it’s noticed something. 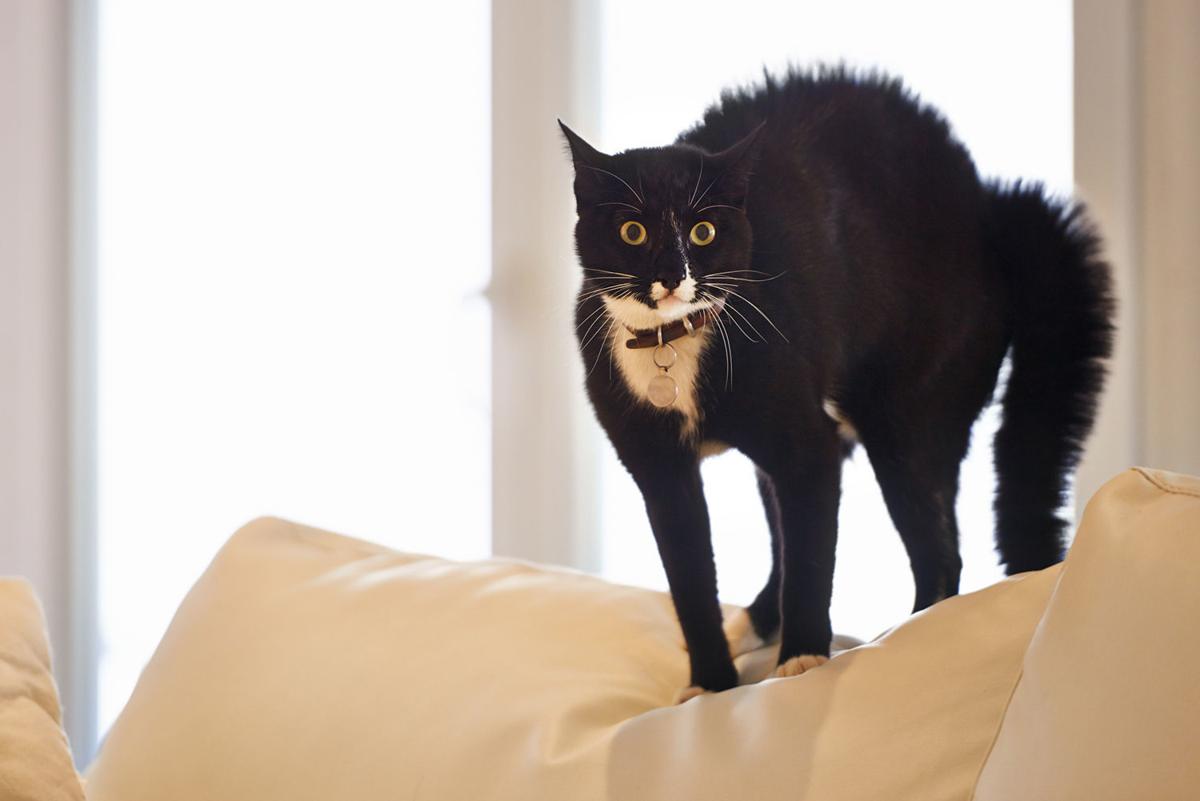 A terrified cat realizes that what it is scared of is not going anywhere so it will try to make itself as big as possible.

It’s hard to mistake this posture for anything other than being really chilled out, however truly relaxed doesn’t necessarily mean sleeping.

An alert cat may still be lying down but its head is upright and it almost looks like it’s noticed something.

A terrified cat realizes that what it is scared of is not going anywhere so it will try to make itself as big as possible.

Whether you are a dog owner or spend little or no time with dogs, it can be relatively easy to understand how a dog is feeling. We know a scared dog tucks its tail, an angry dog bares its teeth or shows its hackles, and a worried dog just looks worried. Trying to decipher what a cat is feeling can often bring on blank stares or a good chuckle but it may surprise the average person to discover that cats do, in fact, spend a lot of time communicating with their bodies in the same way that dogs do.

They say cats have nine lives but anyone who is a cat parent also knows they can be gifted with multiple personalities and display various postures to let us know how they are feeling.

A relaxed cat can be on its side with its head lying down on the floor and its legs out to the side either bent or straight. It’s hard to mistake this posture for anything other than being really chilled out, however truly relaxed doesn’t necessarily mean sleeping, as your cat may be lazily batting at a toy or a dangling thread. Belly rubs are allowed by appointment only.

An alert cat may still be lying down but its head is upright and it almost looks like it’s noticed something. Its eyes are slightly rounder and its ears are a bit farther forward. The tail may be twitching and may curve away or up and even sometimes around the body. How dare you interrupt me?

When a cat is tense it will draw up its legs in toward its body and only its tail’s tip may be moving up and down or from side to side. Its head may start to press down into its body a bit, somewhat reminiscent of a turtle heading back into its shell. The eyes are even bigger and rounder. What, you’re wearing that?

The anxious cat looks ready to bolt, its legs right under its body and its ears beginning to flatten a little. The tail isn’t taking any chances either as it curls itself up close to the body while perhaps moving a little bit from side to side. Its pupils are wide and dilated and the eyes are as round as a saucer of milk. Its back end is lower than the front in a kind of “slinking” motion. I’m outta here!

The most distinguishing feature of the fearful cat is the “crouch”. It tries to get low to the ground by bending all four legs and may be shaking. Its ears are flattened to the head and most interestingly, its whiskers have moved back and are plastered to its face. It is staying as still as possible and breathing fast and hoping this scary episode will be over as soon as possible. Change the channel, please.

Now, a terrified cat realizes that what it is scared of is not going anywhere so it will try to make itself as big as possible. Picture all those Halloween images of a cat with a high, curved back and straight legs and you have a cat that wants to do the scaring rather than be scared! Kitty will puff its tail up along with the hair on its back as it wants anybody or anything nearby to know it means business. You want a piece of me?

Many of these postures can help discern the type of personality your cat has and often, no two are alike. A friend of mine has two cats, a male named Odin and a female named Coco, both approximately the same age. When my friend is not feeling well, Coco will curl up beside him so he isn’t disturbed, but the slightest noise will send her running to hide in the basement. Tough guy, Odin, runs to the window to watch fireworks and has been known to sleep through thunderstorms.

Odin is completely motivated by food and will eat just about anything whereas Coco will ignore what is in her food bowl just to make a point. As soon as the vacuum comes out, Coco is in run and hide mode whereas Odin will hop on and go for a ride. During a veterinarian exam, Coco will hiss and swat at the vet, resisting the entire time while Odin just lies there completely cooperative.

Famous cats include Grumpy Cat and L’il Bub, whose personalities are at opposite ends of the spectrum. The affectionate and sociable cat has a gentle disposition which makes it a joy to be around. The chatty cat is extremely vocal and will welcome you home with a meow and seems to enjoy the sound of its own voice. The “movie star” cat, alert and curious, loves to entertain and play and thrives on being the centre of attention.

Yet, the shy and aloof loner cat hides under beds and in closets and almost seems afraid of its own shadow — a true “scaredy cat”. The “leader of the pack” cat is acutely intelligent, independent and alert and is no lap cat. In a multi-cat household, it’s the head honcho, first to eat and drink and doesn’t like to be picked up.

So what kind of cat do you have?