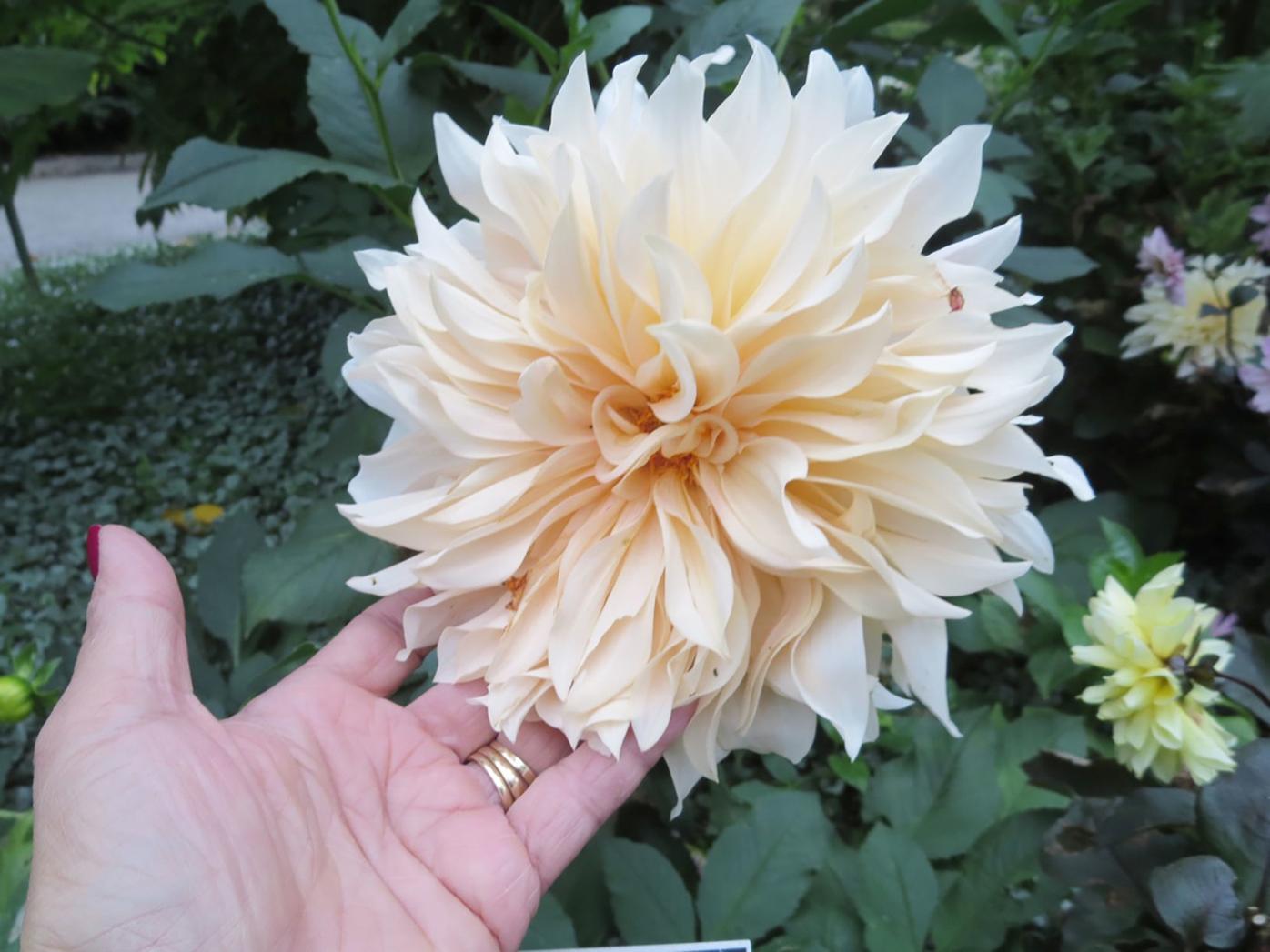 The dahlia boasts dinner plate diameters in hues of pure white to deep burgundy and prolific blooms that persist all summer until the first fall frost. This giant flowered decorative dahlia is ‘Café au lait’. 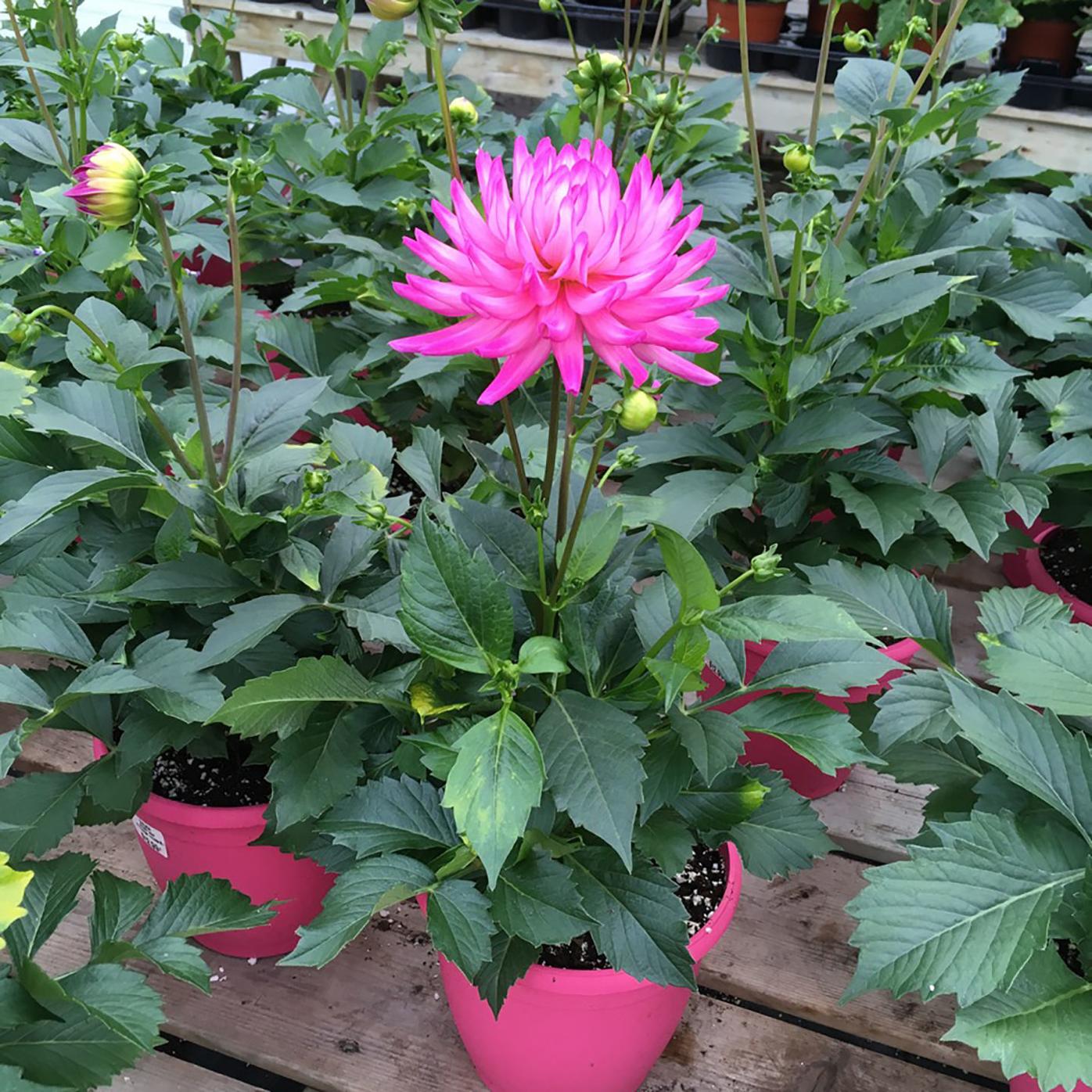 Tubers can be started indoors in pots (called forcing) 4-6 weeks before the last spring frost which will get dahlias blooming a month early.

The dahlia boasts dinner plate diameters in hues of pure white to deep burgundy and prolific blooms that persist all summer until the first fall frost. This giant flowered decorative dahlia is ‘Café au lait’.

Tubers can be started indoors in pots (called forcing) 4-6 weeks before the last spring frost which will get dahlias blooming a month early.

If I could invent the perfect flower, it would be attractive and pleasantly-fragrant, with profuse blooms of various shapes, sizes and colours that attract pollinators, and look great not just in the garden, but displayed in a vase all while being easy to care for. The dahlia meets most of this criteria (alas, not fragrance).

Although dahlias do require specific care — sunshine, shelter from excessive wind and heat, staking, adequate moisture and free-draining, humus-rich soil — dahlia gardeners will argue that they are well worth it. After all, no ordinary flower can boast dinner plate diameters in hues of pure white to deep burgundy and prolific blooms that persist all summer until the first fall frost. Northern gardeners should grow them if not for their versatile nature, solely for their colour value in the late season garden.

The dahlia is an herbaceous, tender perennial whose tall, hollow stems grow from tubers. You have likely seen them in garden centres, tuberous roots packaged in perforated plastic bags or boxes alongside other summer-flowering bulbs in early spring or later, already blooming in pots in full temptress mode. Wary of their fuss-pot reputation or ignorant of their potential, you may have snubbed them, as I have, in lieu of more trendy greenhouse selections.

The more popular bedding variety of dahlias, grown from seed rather than tubers, are available with all the other annual flats in May. Reaching a maximum height of 60 centimetres, these compact forms infuse containers and garden borders with colour without needing staking, unlike their taller, exhibition counterparts.

With names like cactus, collarette, stellar, pompom, and ball reflecting their ultimate flower form, dahlias are classified into multiple organized groups. Attractive features are presented in shows that highlight the most exceptional specimens. Ultimate height varies, with most tuberous dahlias stretching up to150 centimetres.

Native to Mexico, central America and Columbia, Dahlias won’t survive our zone 5 winters. So if you want to keep them year after year, tubers must be lifted from the ground after the first autumn frost and stored in an unheated garage until the following spring. Then, tubers can be planted directly into the garden once soil has warmed, typically around the end of May after tomato seedlings are safely planted outdoors. But why wait? Tubers can be started indoors in pots (called forcing) 4-6 weeks before the last spring frost which will get them blooming a month early.

Plant single tubers horizontally in a container of good potting soil with pink eye buds facing up-wards, near the soil surface. Once the plant sprouts, feed with a low nitrogen fertilizer such as 5-10-10 and give it plenty of sunlight from a nearby window or fluorescent grow light. After hardening off, dahlias can be planted outdoors in prepared sites or in spaces left behind by early spring flowers. Ample air circulation will prevent powdery mildew and mulching sparingly will help deter slugs.

The new gardening season is only weeks away and dahlia tubers are in garden centres now waiting for committed gardeners to take them home. Unique varieties are also available online, shipped just in time for planting season. If you are up to the challenge why not pot up a few of these beauties during these remaining days of winter? With all the hybridizing of dahlias, there is surely one to please everyone.

Elaine Sanders can be reached at www.solutionsjardins.com