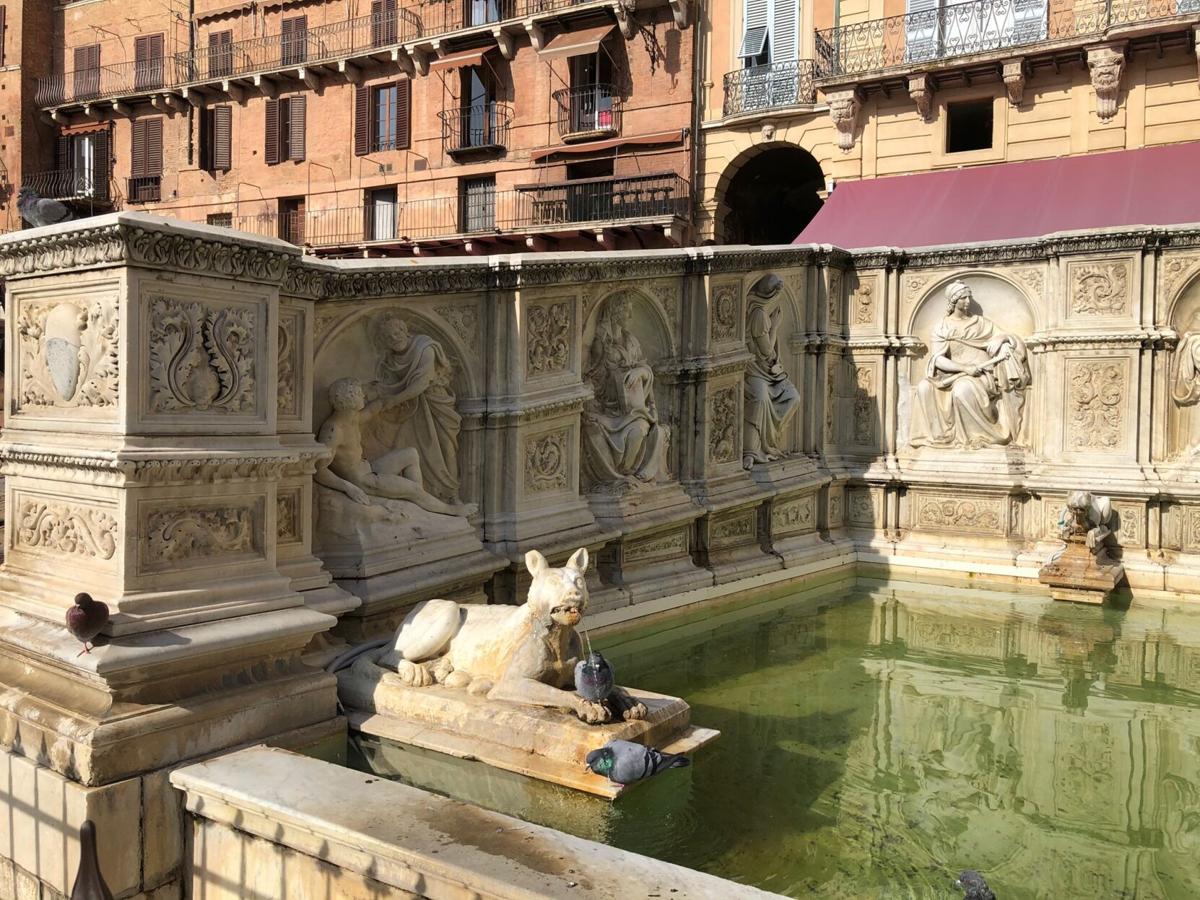 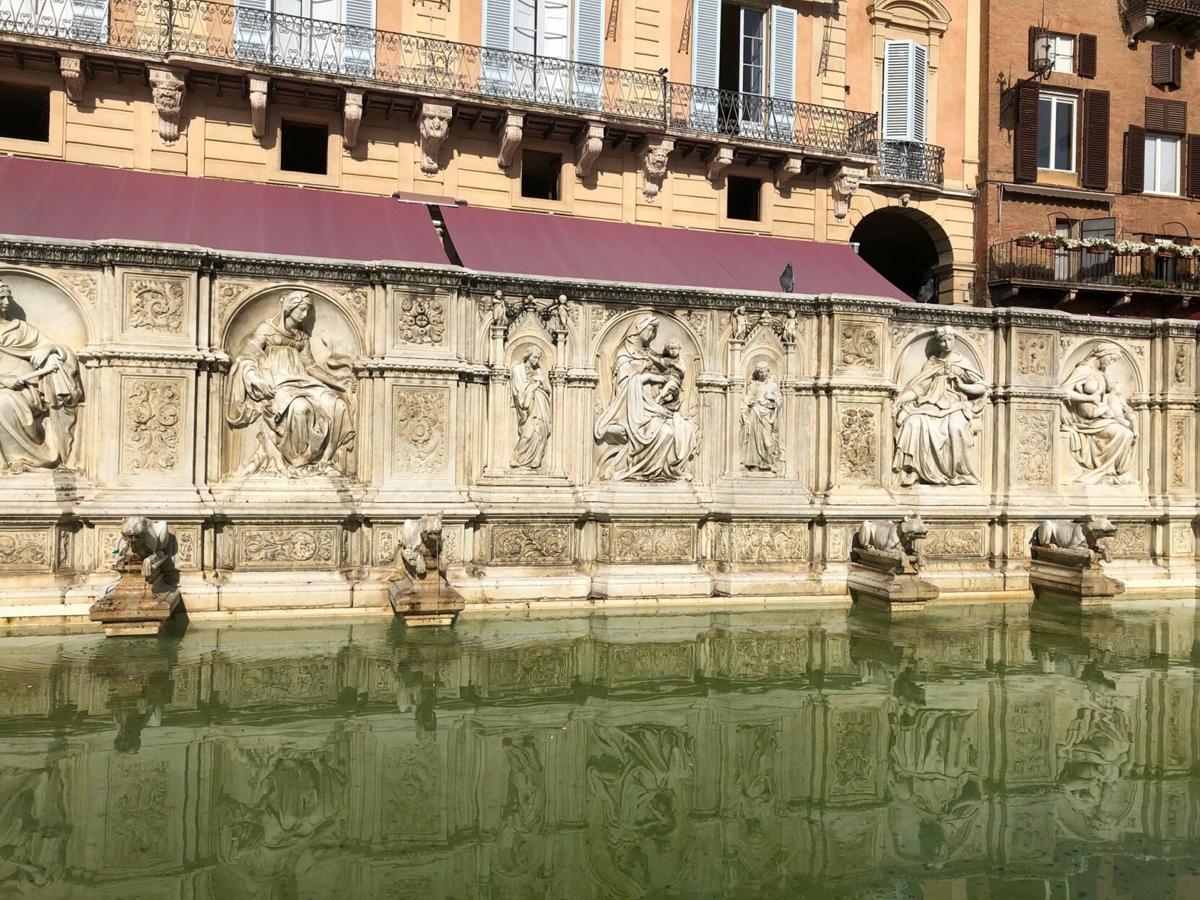 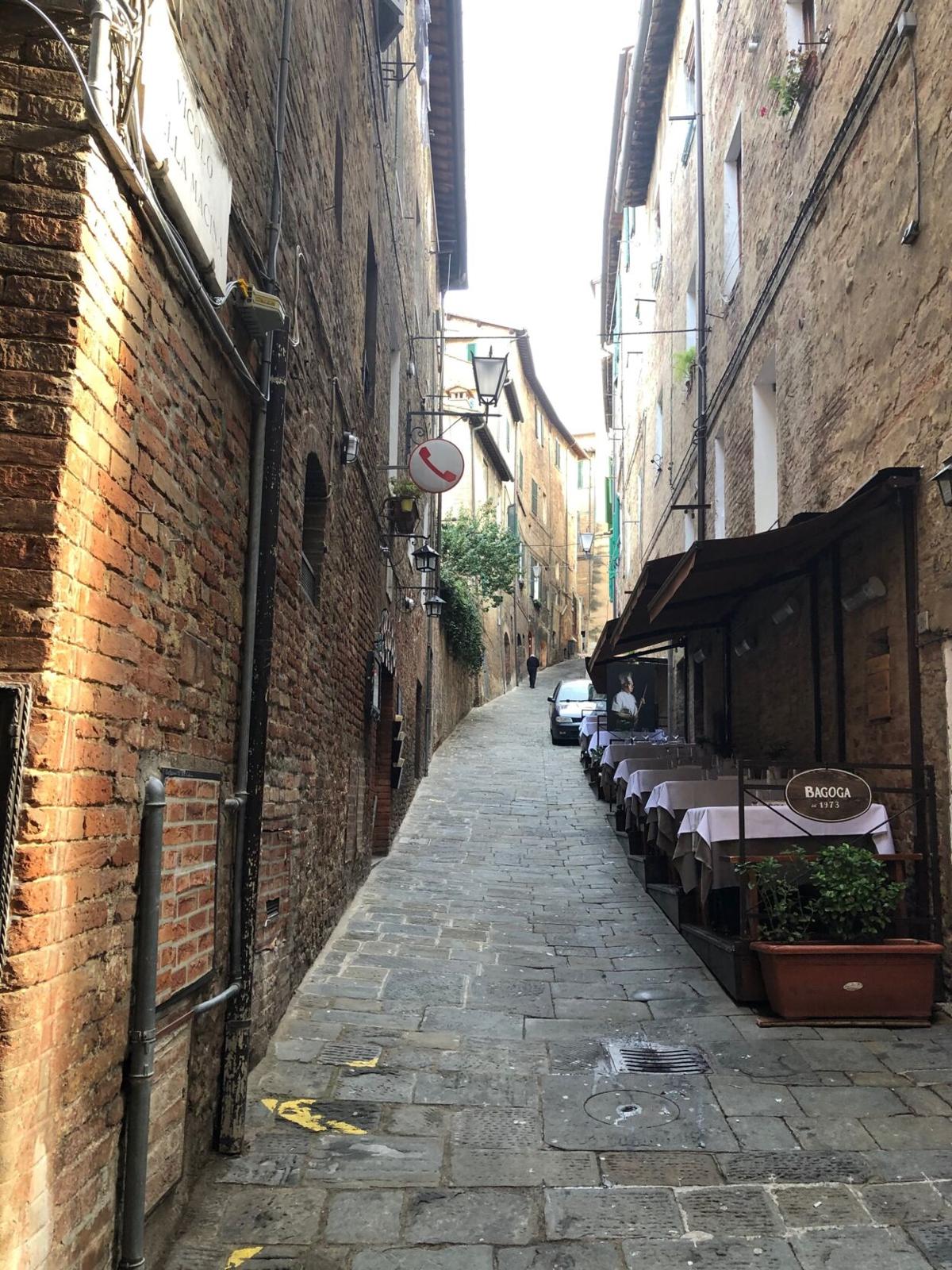 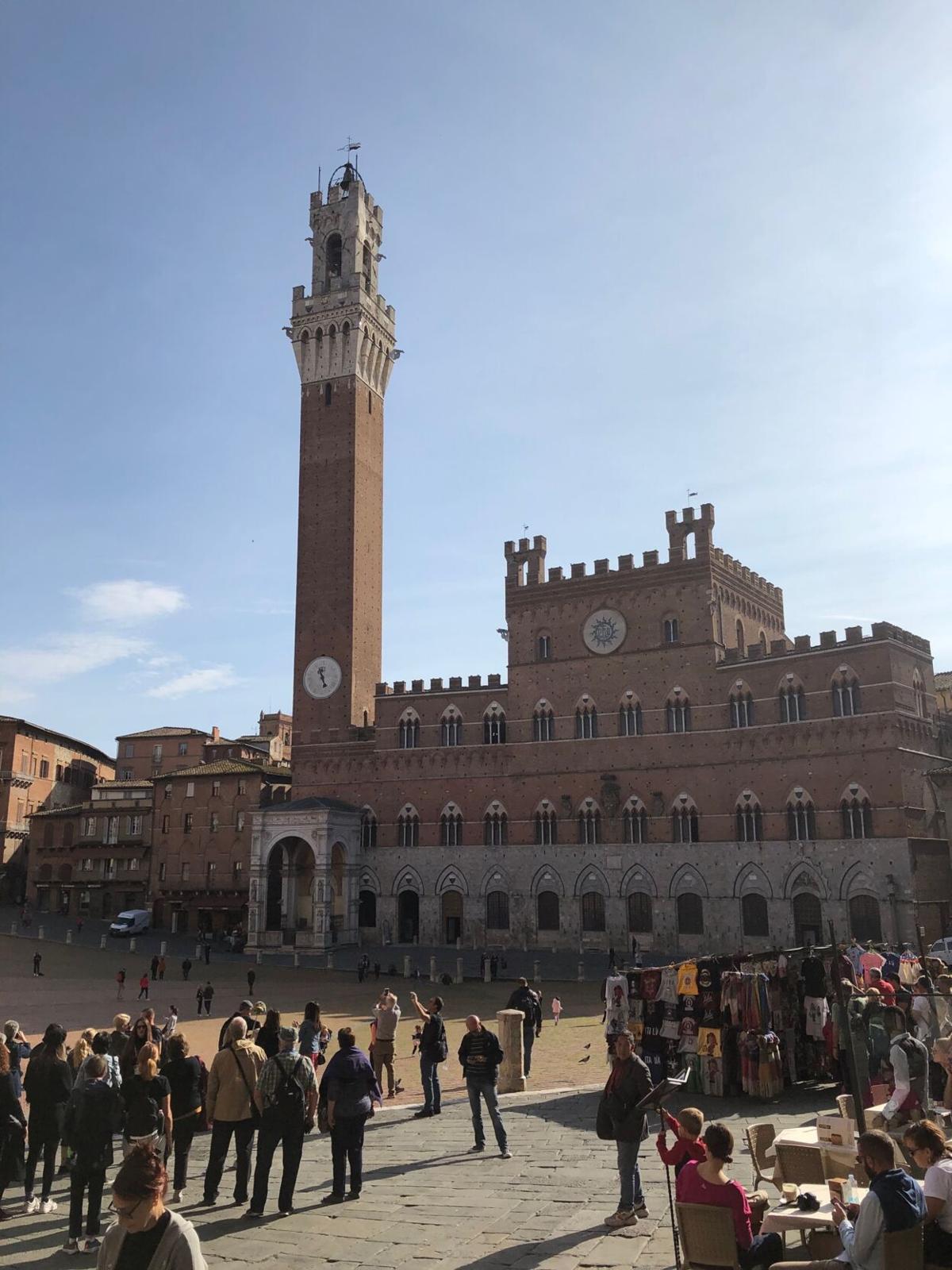 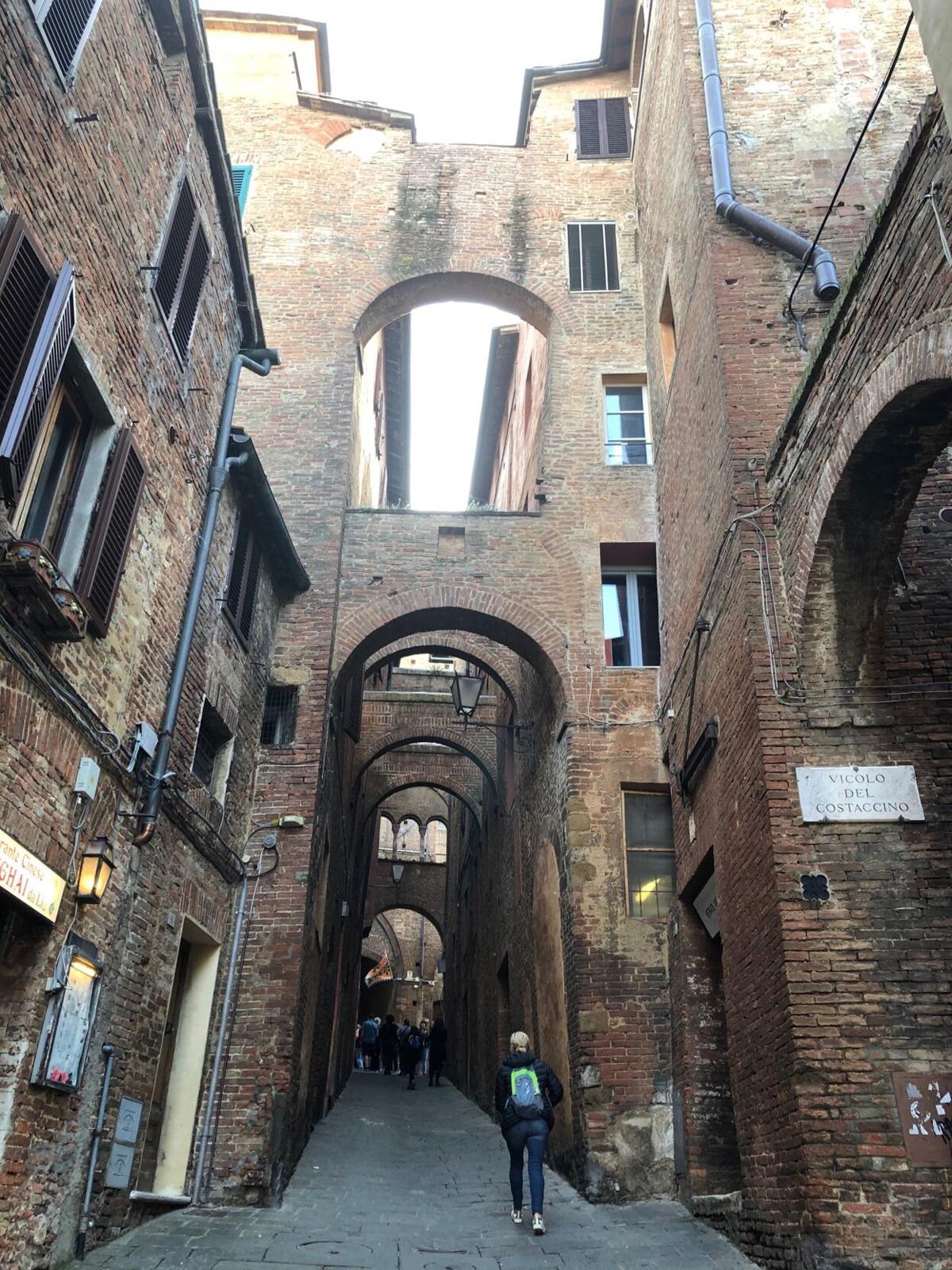 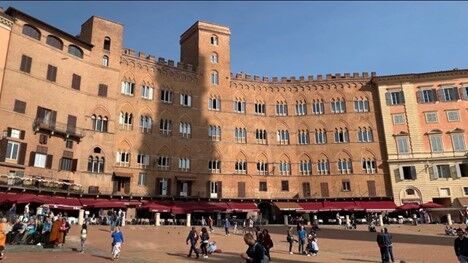 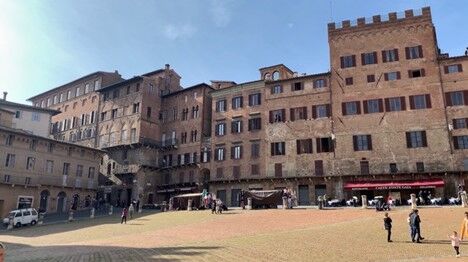 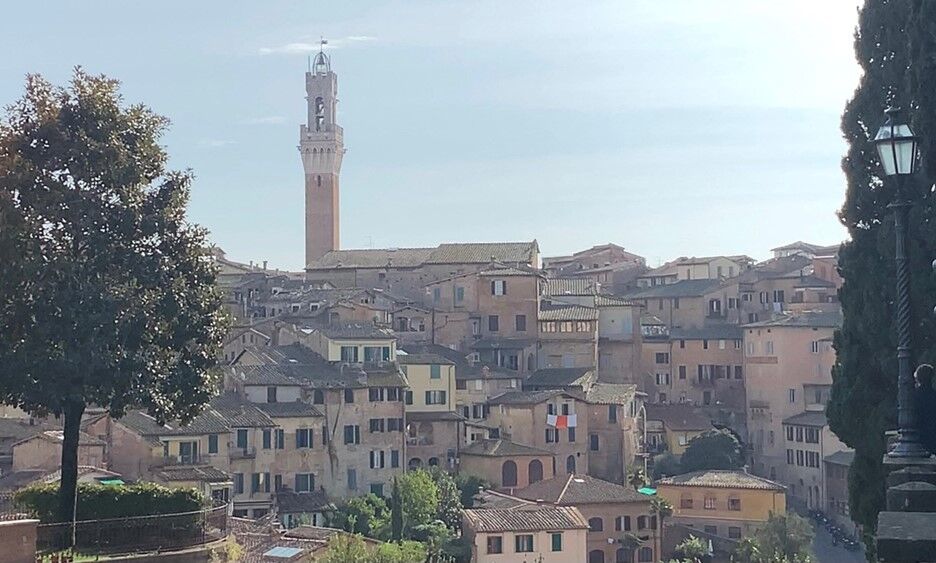 Our Tuscany tour continued to the medieval city of Siena, nestled within the Tuscan hills, approximately 48 kilometres south of Florence. This city has preserved its historical 13th century character and quality to a remarkable degree that in 1995 UNESCO named Siena a World Heritage Site, thus having a legal protection by an international convention.

Our walking tour began with a visit of the Basilica Cateriniana Di San Domenico, one of the most important churches in Siena. From its impressive Gothic-style brick building, we had a magnificent view of the Duomo of Siena’s Cathedral and the Torre del Mangia, two popular landmarks. From there we navigated up and down the long streets, at times with inclines of 30-degrees, to the most important landmark of Siena, the Piazza del Campo. The whole city was built around this Piazza and the 7 kms long fortified wall still surrounds the 170-hectare site, which is stunning. The Piazza Del Campo is a unique shell shaped piazza at the center of the city, bustling with bars and restaurants. It is here that the popular Palio Horse Race is held. Staged twice a year, on July 2nd, in celebration of the Madonna of Provenzano (a 16th-century miracle painting) and on August 16th in honor of the Assumption of Mary, the Palio brings history and local identity to life. It is a very popular event, drawing in crowds, with both tourists and locals.

Several landmarks surround the Piazza. Here’s a look at the ones we visited.

Palazzo Pubblico, Siena’s City Hall and adjacent to it, the magestic Torre del Mangia, towering over the Piazza, which offers spectacular views of the countryside. At the tower’s base, is the Cappella di Piazza (Chapel of the Virgin Mary), a marble tabernacle with exquisite sculptures.

Piccolomini Palace home to the official archives of Siena.

We ended our tour at the Duomo de Siena (Siena Cathedral), one of the most beautifully designed churches in all of Siena. From there, we were off to lunch in Montalcino.

Also, for all the videos on this destination visit the youtube channel @Les Escapades de Dora et Alain.

This trip was taken before the pandemic. These are the personal opinions of the writer - The Suburban does not endorse travel at this time.